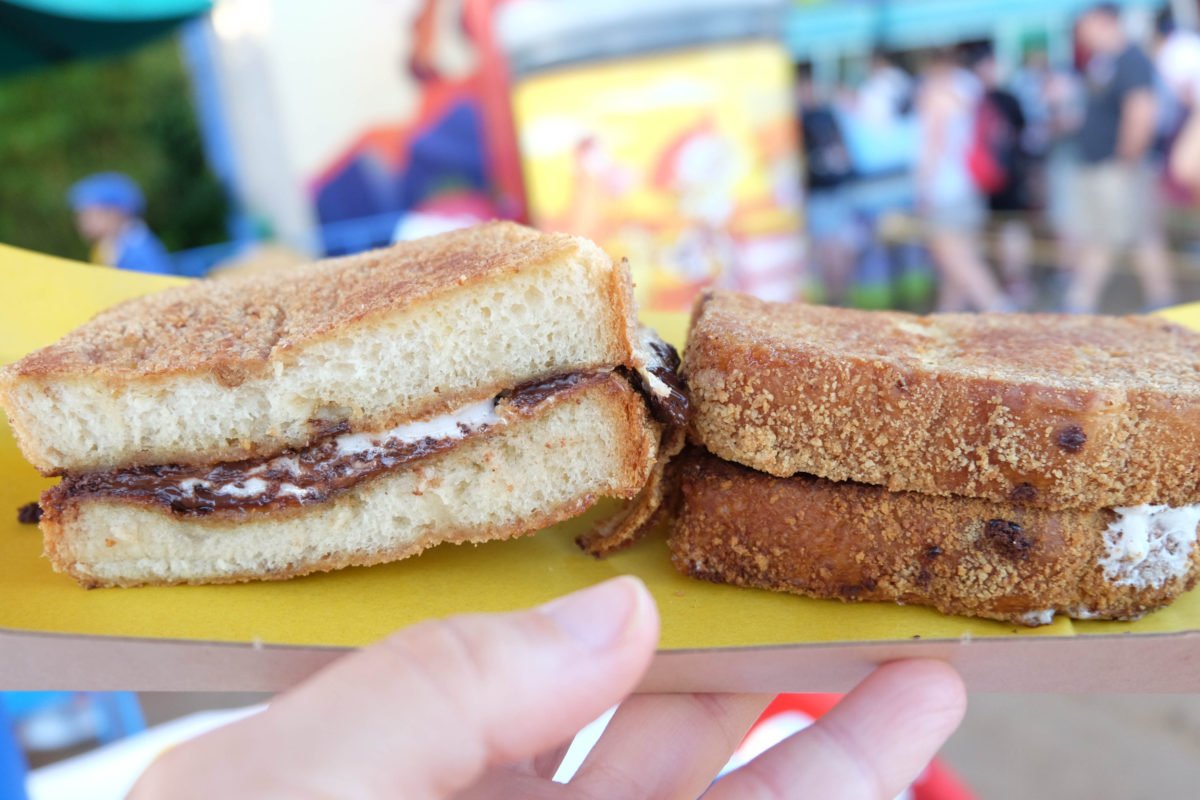 In the last few years, Hollywood Studios has really stepped up its Disney Snack game. From Toy Story specialty snacks to Galaxy’s Edge treats. If you’re looking for some tried and true favorite snacks that lure you through the gate then these are the 13 Best Snacks at Hollywood Studios to meet the challenge.

Hollywood Studios Snacks and Where to Find Them

We’re seeing more and more temporary snacks arrive at Hollywood Studios, not only for the season, but also for special events. But what are the tried and true treats you can count on no matter what is happening in the park? Here’s our Go-To list of the BEST Hollywood Studios Snacks, a work-in-progress.

While we couldn’t say this is a snack, as much as say it’s a breakfast, we try to add as many s’more things into our snack lineup as possible. This is a french toast sandwich filled with marshmallow fluff and chocolate filling. Grab this in the morning if you want to try this decadence, because come lunch, the menu here changes. 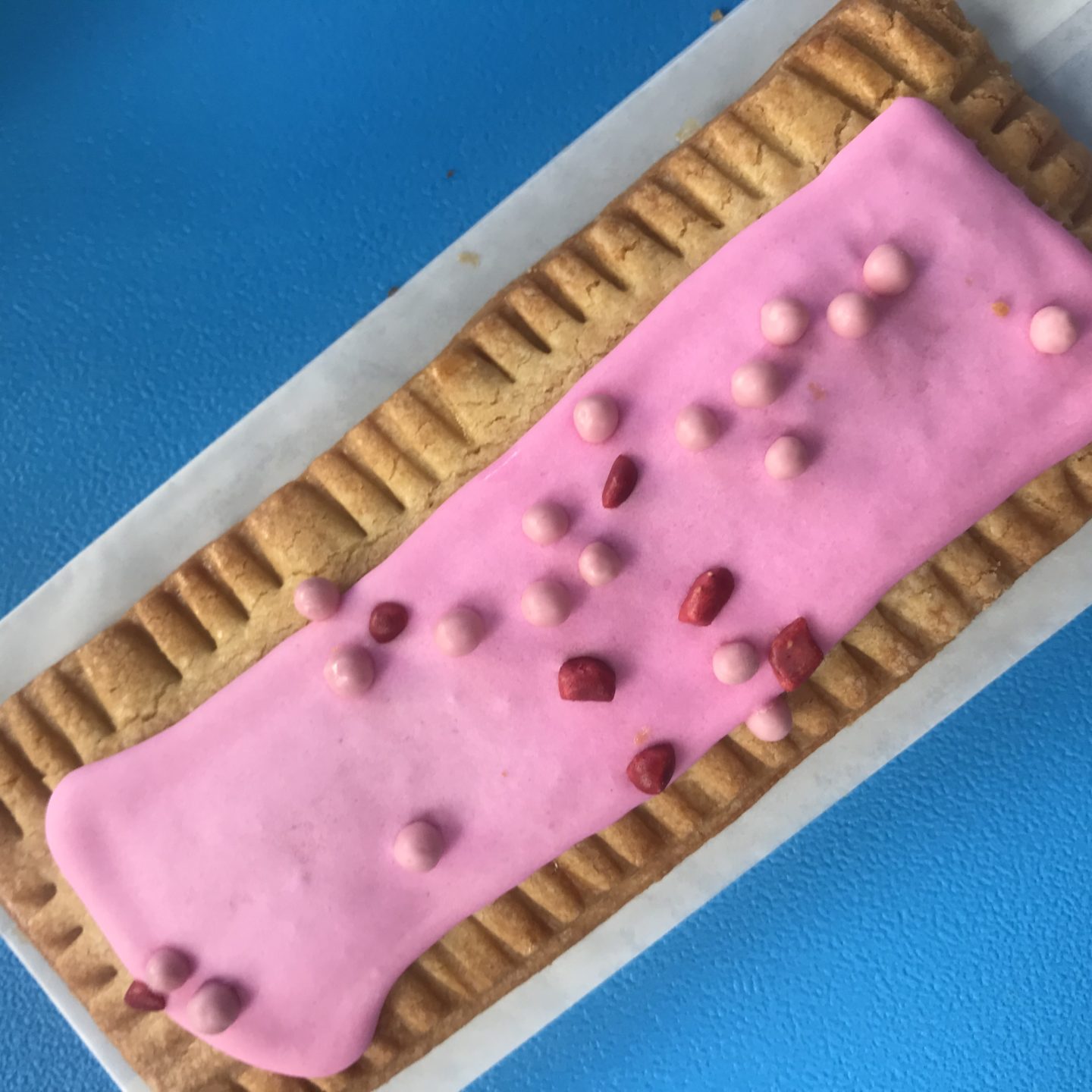 Love pop tarts? Well, maybe it’s time to try something twice as big. Shareable, and homemade, these lunch box tarts at Woody’s are a lovely mid-day snack. sometimes offered in seasonal flavors, the standards are Raspberry and Chocolate Hazelnut. Be sure to grab these at Woody’s Lunch Box in Toy Story Land. 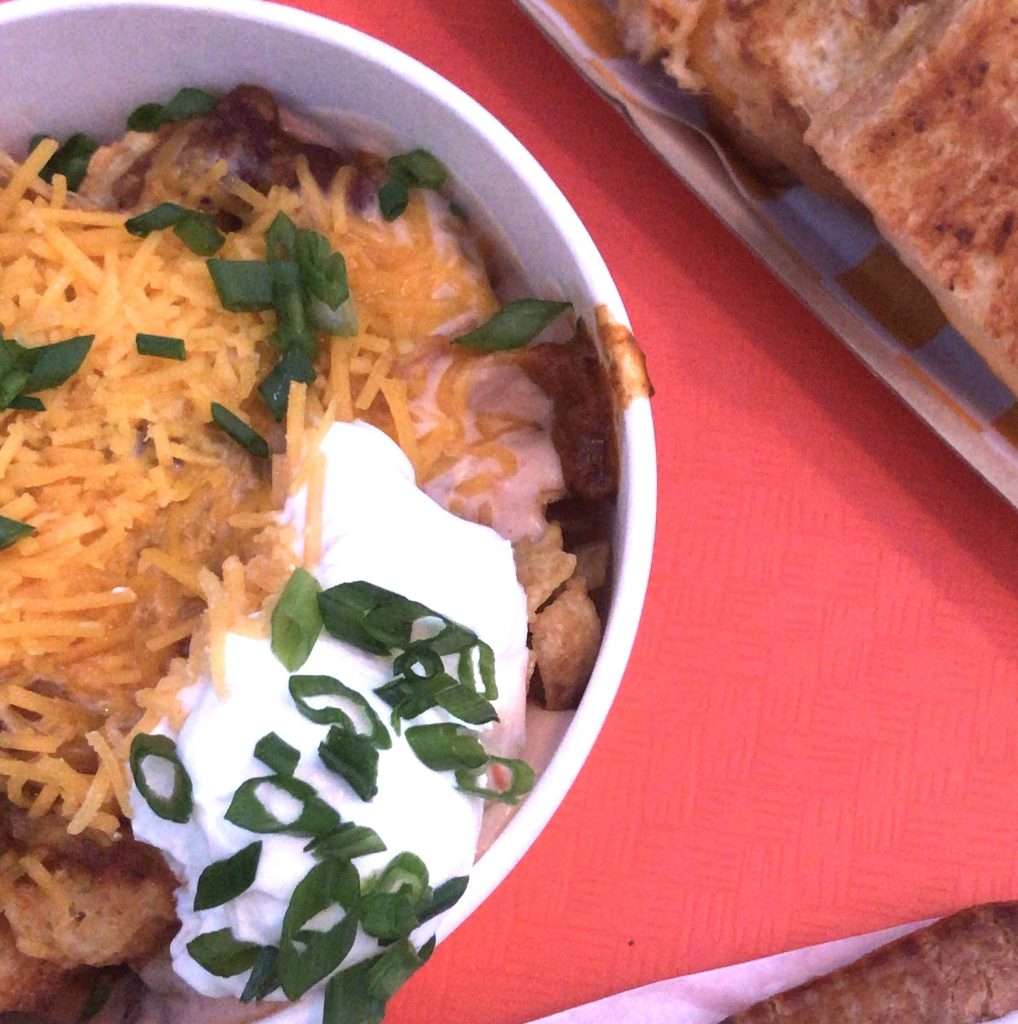 While these might just seem like an odd twist on nachos, this new snack is one of our favorite foods to come out of the new Toy Story Land area! A mix between nachos and tater tots, what’s not to love?! This dish basically consists of tater tots covered in chili, cheddar cheese, queso, sour cream, scallions, and FRITOS! Yes, you heard right, Fritos my friends. Crunchy, flavorful, filling, and delicious.  And you can carry it around! This snack has officially been made our BEST non-dessert snacks at Disney World list and is one worth trying. 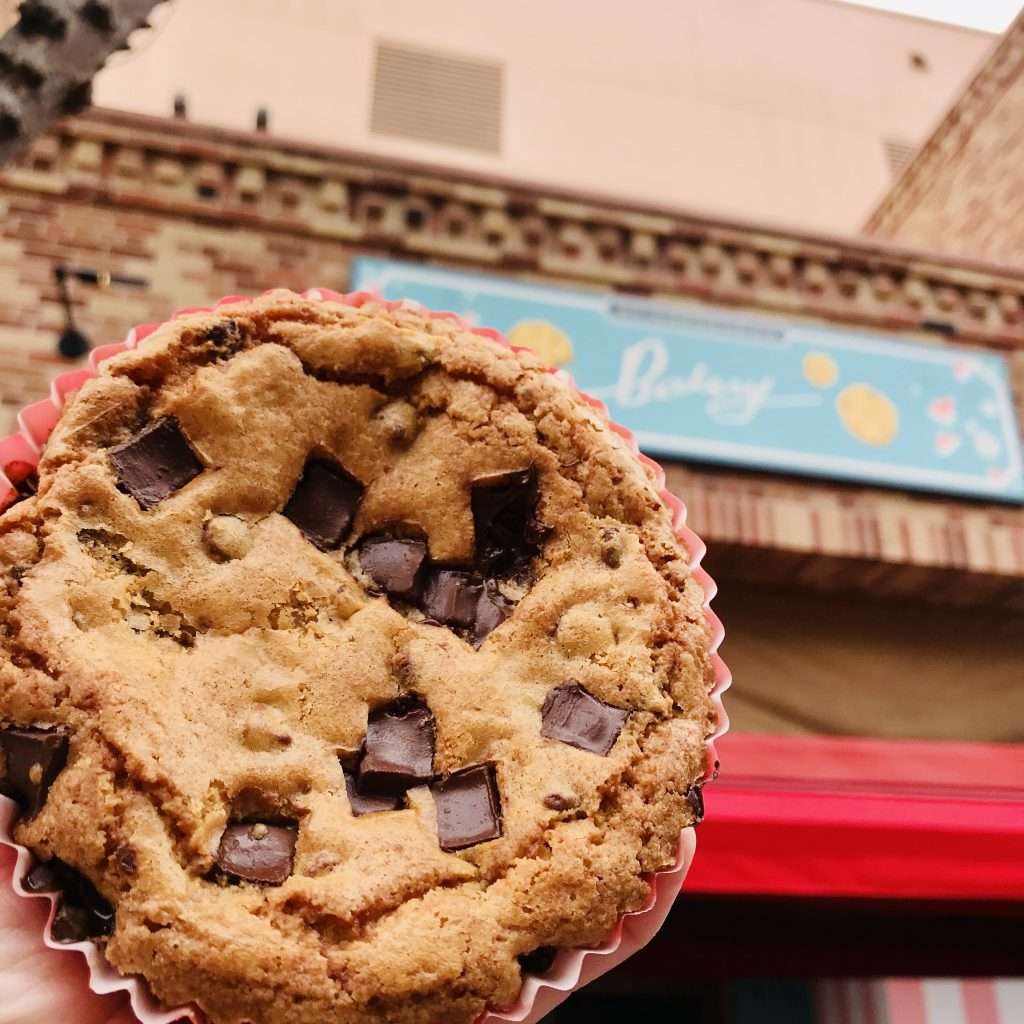 A new addition to the Hollywood Studios lineup the Nom Nom Cookie is available in the Pixar Place area right before you head into Toy Story Land. This area is always in flux so grab this treat while you can. Mind you this cookie comes with some major street cred! If you’ve been to Disneyland you know this cookie is a staple at Pixar Pier. A larger chocolate cookie, made with chunks instead of chips and deeper than most cookies. This one comes in a small pie-like container. Meant for eating with a spoon. And definitely able to be shared….well, maybe. 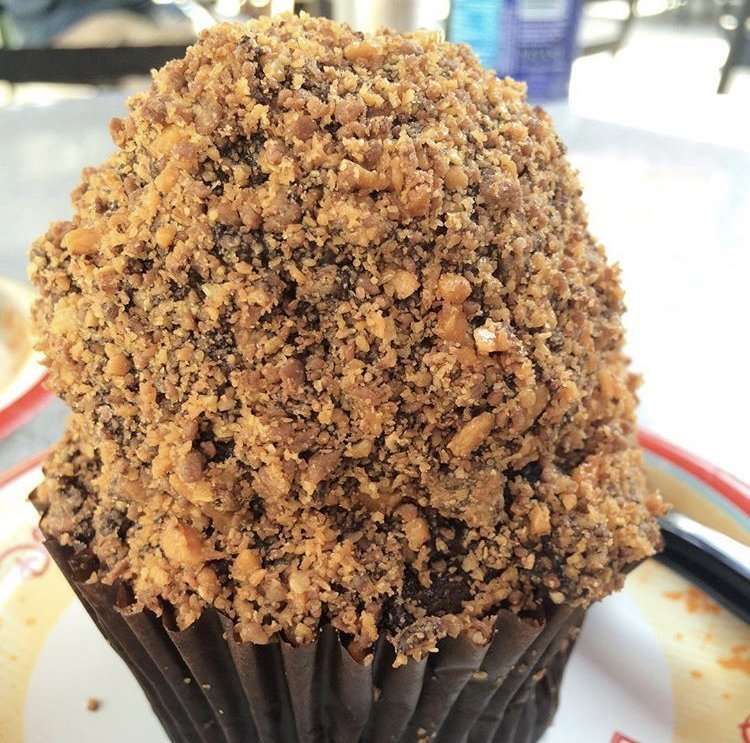 Previously available at Starring Rolls Cafe, before they closed, we recently found this decadent beauty at Starbucks! A true sign that it was one of the cupcakes to survive the slaughter should be enough for you to give it a try. With butterfingers in the batter and in the frosting, you won’t be needing any other dessert the day you order this. It hits every sweet spot.

While we tend to love the funnel cakes over in Epcot World Showcase’s America Pavilion, these work too. The funnel cakes at Epic Eats, near the Indiana Jones Stunt Spectacular, come in a variety of flavors. You can always get a classic version of just fried dough and powdered sugar. But you can also get ones with strawberries and vanilla ice cream. Or the cookies and cream variety. 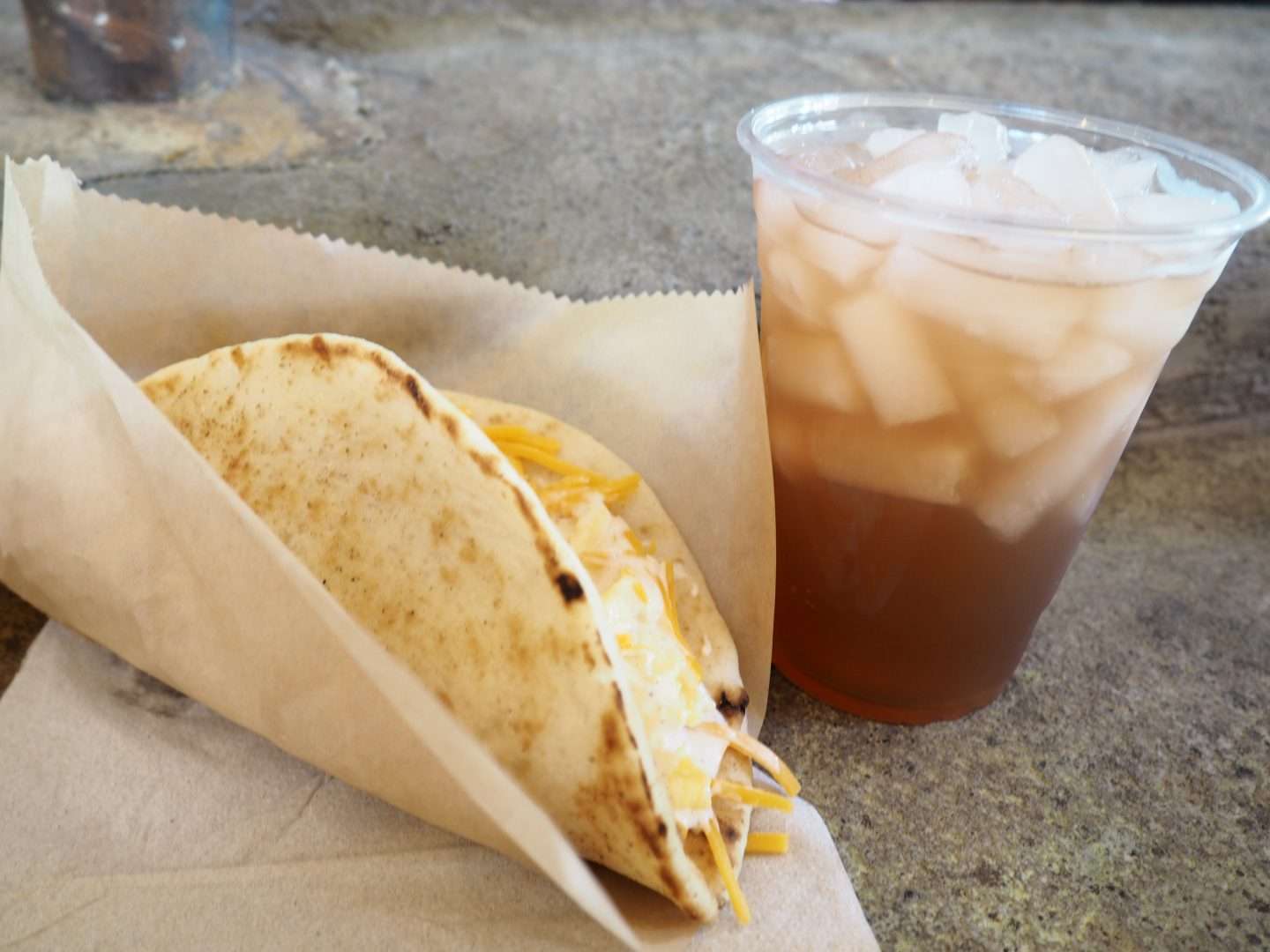 This is a must-do part of any Star Wars Galaxy’s Edge experience. While you can definitely grab the regular Ronto with coleslaw we also love the Ronto Morning Wrap as a great snack. This soft pita is filled with egg omelet, grilled pork sausage, shredded cheese, and peppercorn sauce. You can also request it without the sausage if you’re vegetarian or vegan.

If Hollywood Studios does anything well, it’s milkshakes. Between the monster shakes you get at Sci-Fi Dine-In Theater Restaurant, and the seasonal milkshakes at Min and Bill’s Dockside Diner your sweet tooth should be satisfied here. But nothing compares to the peanut butter and jelly milkshake you can grab at Prime Time Cafe or the Tune-In Lounge. This PB and Jelly milkshake actually tastes like a peanut butter and jelly sandwich. Not just ice cream flavored with peanut butter and jelly. We really don’t know how they do it but it was the #1 thing recommended to us to try at Hollywood Studios and we were not disappointed. You can even grab the recipe for the 50’s Prime Time Cafe PB and J Milkshake, courtesy of Disney Parks Blog. 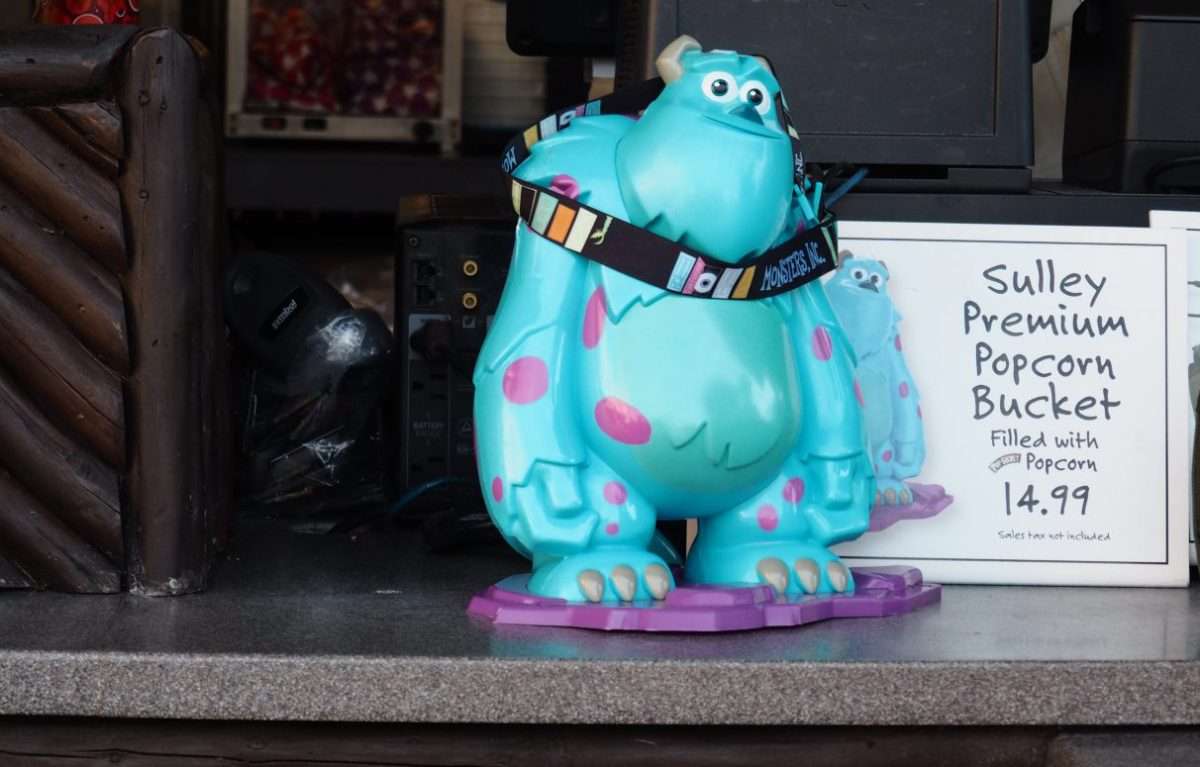 When grabbing popcorn at Disney Parks it’s important to hunt down whatever cute popcorn bucket you can. And Hollywood Studios features the cutest seasonal and character popcorn buckets. Regardless of where you pick up your cute refillable popcorn bucket, once you have it in hand you’re golden! The tip here is to buy a popcorn bucket at the beginning of your trip and grab the $2 refills, from any popcorn cart anywhere in Disney Parks, during the length of your stay. Not the most glamorous snack, but definitely a budget-friendly one.

This little swirled pastry is perfect for a breakfast treat. The Mustafarian lava roll combines layered pastry, chocolate crumbles and is topped with raspberry sauce. Definitely be sure to grab one, or maybe two next time you’re in Galaxy’s Edge, Hollywood Studios. 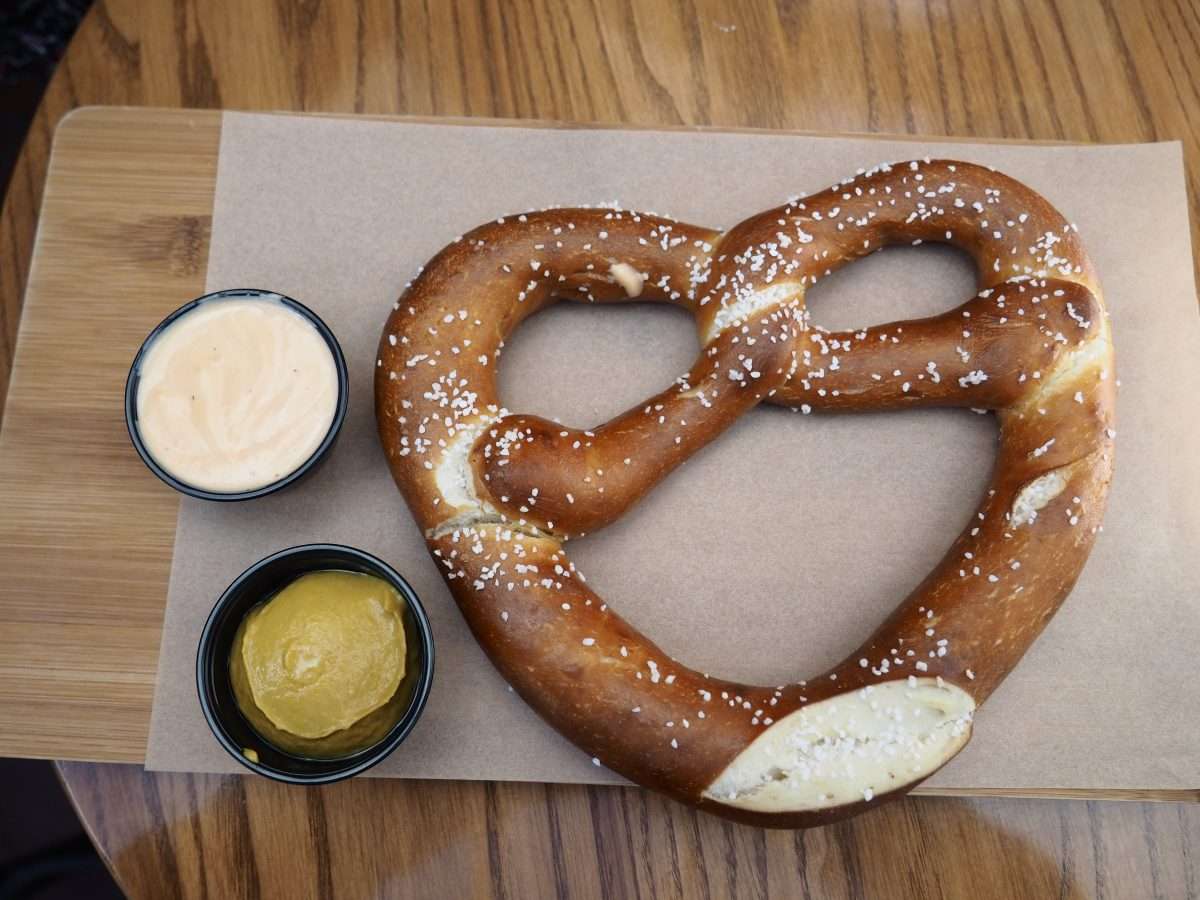 While some people complain about Mickey Pretzels throughout the Parks, we think the Bavarian Pretzel really steps it up a notch and may be  your new favorite pretzel. Served with Beer Cheese Fondue and Spicy Mustard, this pretzel is not only huge and worth sharing, but also rich and delicious. Baseline has quickly become one of the hottest spots in Hollywood Studios to grab snacks and a variety of ciders, brews, and wines, so be sure to check it out for a fun pit-stop when at Hollywood Studios.

Another snack we also adore over at the Les Halles Boulangerie Patisserie in Epcot World Showcase France, you can also grab it at the Starbucks in Hollywood Studios. The flaky pastry filled with pastry cream and the white frosting is to die for. This is an extra luscious snack. But you can also grab the raspberry version which includes a raspberry cream center and raspberry frosting if you want a little extra pizzazz.

This is a GIANT carrot cake cookie stuffed with sweet cream cheese frosting. Definitely not for the faint of heart, this cookie needs to be shared. This is one of the Best Snacks in Hollywood Studios and iconic since it’s been available forever.

The Churros at Hollywood Studios are pretty big. Very soft, light, fluffy, and covered in cinnamon and sugar. If you’re lucky you can also find these in lightsaber blue and red. Something to note. To be on this best snacks at Hollywood Studios list these need to be fresh to be good. For that reason, see if you can time your snack purchase right after new ones are made. You can even ask the cart attendant so you can snag your place in line at the right time.

This cream cheese stuffed pretzel is in high demand! Nothing like cheese and bread to really get you ready for a busy day at Hollywood Studios. And this Disney snack usually sells out by 4 or 5 pm. So grab them while they’re available. And chat up the cast member so you can time the next fresh batch!

Hope this list has given you a good idea of what to make time for, snack wise when next you head to Hollywood Studios. If we missed anything stellar that deserves a place here, let us know! 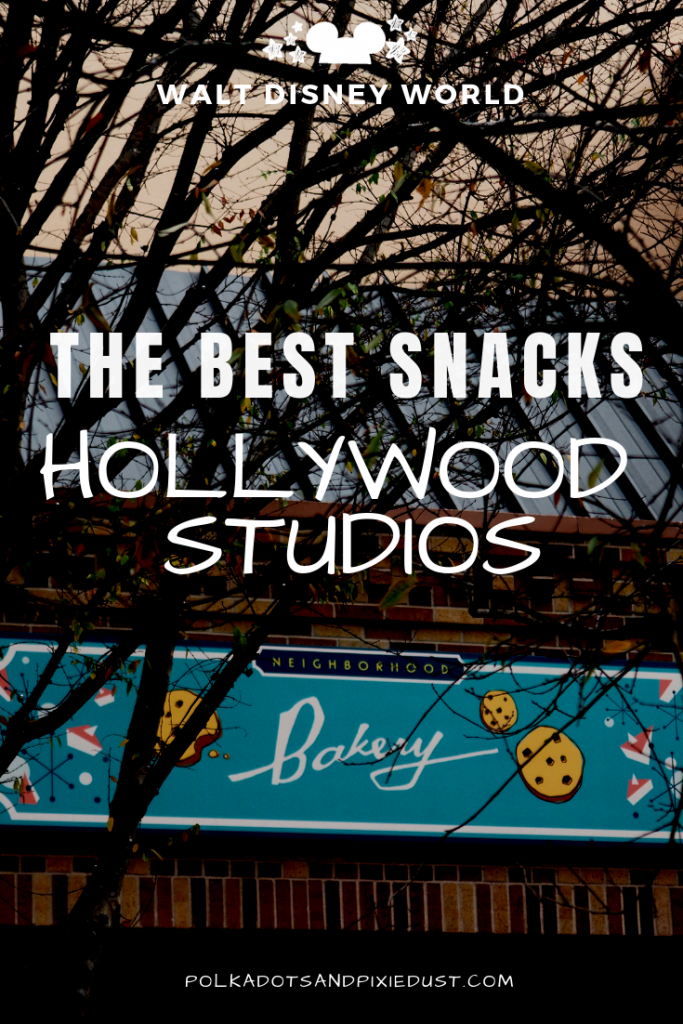 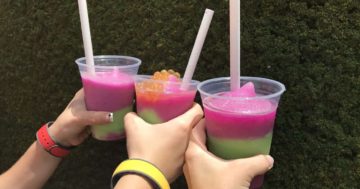 Always on the hunt for the best snacks at Disney World, we are happy to report that although Animal Kingdom may be a very underrated Park, their snack game can still compete with the best of them.  We would even go so far as to […]