The new Star Wars Hotel at Walt Disney World is boarding soon. And by boarding, we mean because this experience is meant to put you inside a spaceship. A Galactic Starcruiser to be exact. If you’re up for an exciting journey to the planet Batuu, this is your opportunity to have a 2 or more night experience at this completely immersive hotel. 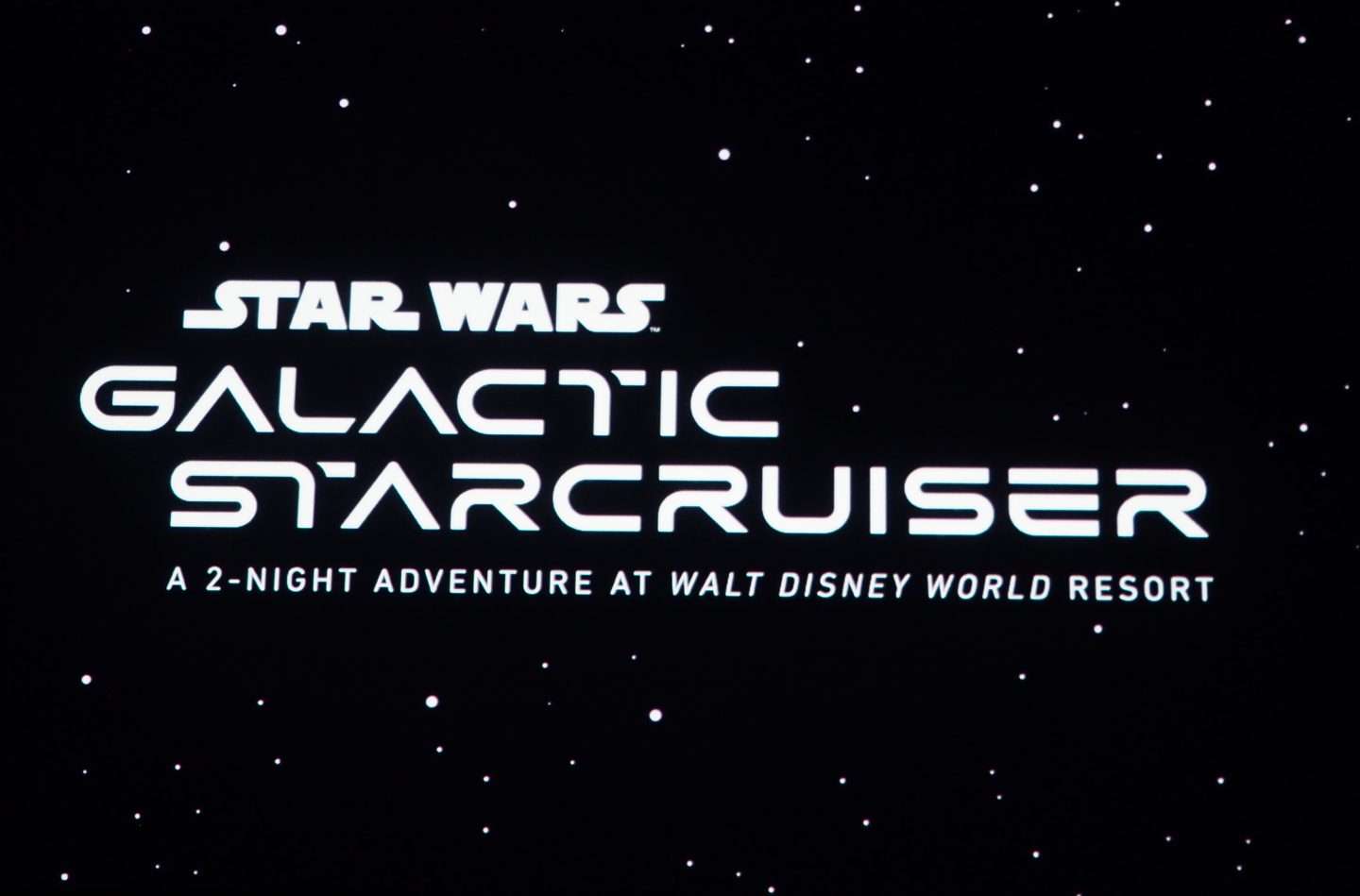 When Does the Disney Star Wars Hotel Open?

Reservations for the Disney Star Wars Hotel named the Galactic Starcruiser will be coming soon as this new Star Wars Immersion Hotel is coming to Walt Disney World Resort in 2022.

Where is the Disney Star Wars Galactic Starcruiser Hotel Located?

As you can see from its new arrival on the Walt Disney World digital map below, the new Star Wars Hotel will be just outside of Galaxy’s Edge, behind the Millennium Falcon area. also note the large parking lot for guests. This hotel will have direct entry into Galaxy’s Edge as part of the 2-night Immersion experience on the planet Batuu. 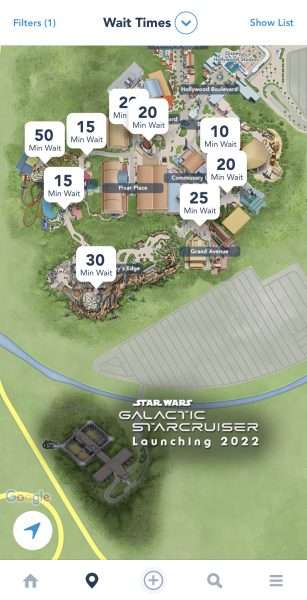 This 3 day, 2-night experience is meant mostly for the Star Wars fan. But in truth, this 3-day interactive story may have you and your family feeling like you’re stuck in a murder mystery dinner. While guests will have next-door access to Galaxy’s Edge at Walt Disney World we’re unclear if hotel guests taking part in the experience will be able to “leave the story” to go into the park during their stay.

Akin to a “lobby” this space will encompass all sorts of Star Wars characters you know and love. Don’t be surprised if you get questioned, pulled into a mission or enter a launch pod to transport to your room. 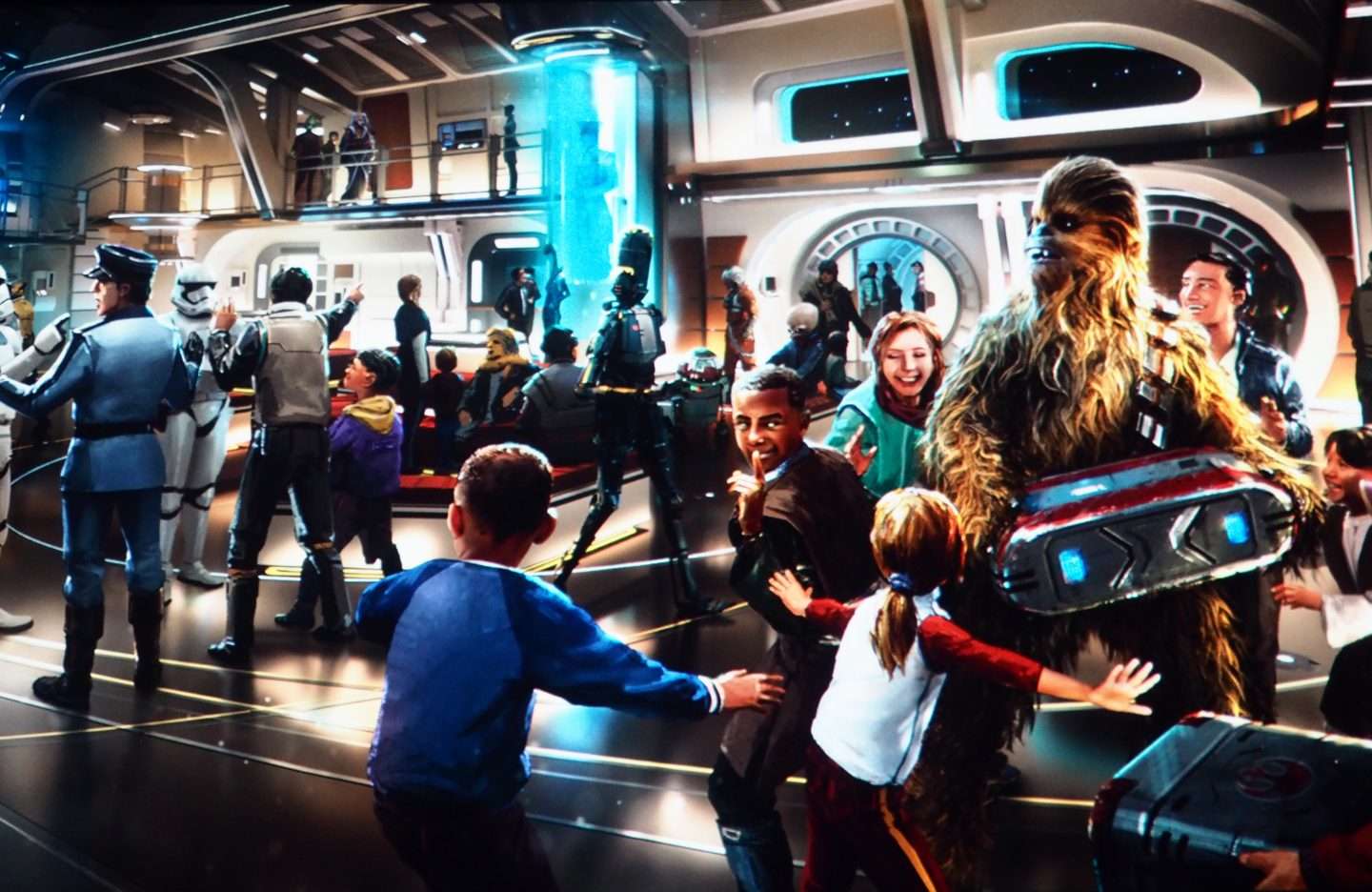 After you leave your car you’re transported to an underground transport where you can “dock” into the ship and enter the hotel. 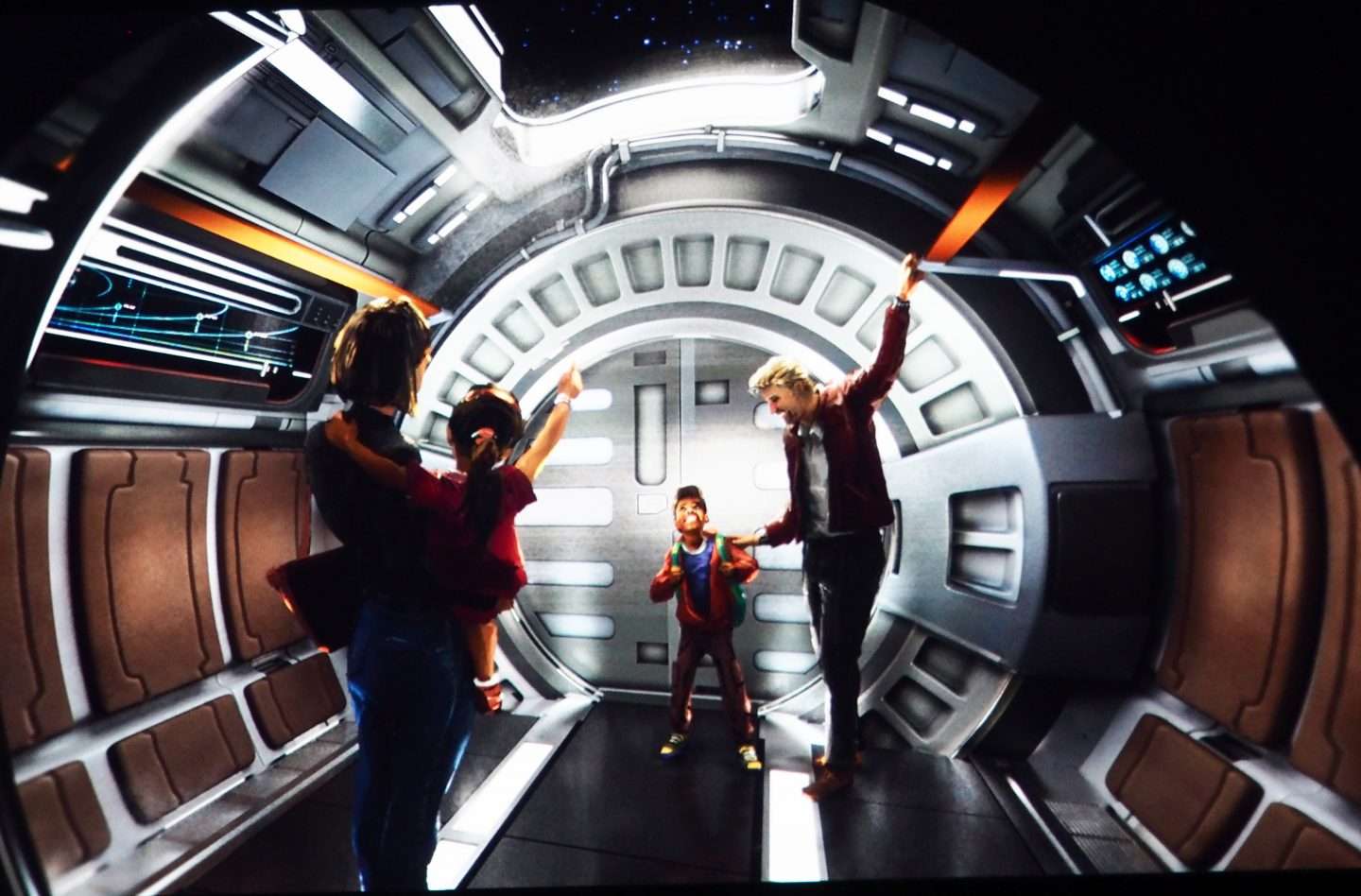 As part of the experience, you get a front-row seat to the galaxy. And since all the windows are technically televisions showing you the galaxy outside, the resort is technically windowless. Think Las Vegas casino windowless.

Guests can enjoy breakfast and lunch in the Crown of Corellia Dining Room during the day. In the evenings, “a lavish multi-course” dinner as the dining room turns into a “supper club”.

A place for all ages this lounge combines fun drinks, games and food to enjoy while on-board.

You can also exercise your ability to harness the Force in lightsaber training involving just you and a computer wall panel.

The immersive experience on the Halcyon is all about the story you craft while you’re there. Much like your role on Smugglers Run, the roles you take on while at the hotel will determine the story and outcome!

With the First Order and the Resistance on board get ready for secret meetings on both sides. And chances are you’ll have to check in to keep up with how your story is progressing.

As a guest on the Halcyon, you can explore the workings of the ship and that includes all the gadgets found in the engineering room; a giant playroom for kids.

Starting price is $3300 for a cabin that sleeps 5. This is rumored as we’ve also seen price expectations at $1400 a person. Since the hotel is not slated to have more than 100 cabins, you’re paying for not only the stay and immersion but also some exclusivity. chances of the experiences selling out regularly is anticipated.

Staying on the Galactic Starcruiser

Ok, so while we love these details, and the Star Wars franchise, in truth you will probably find us at any other Disney resort for vacation. Mainly, because when we go to Disney it’s because we need the vacation. The idea of being “trapped” in a windowless hotel, with some cool gadgets, some mandatory missions, and meetings sound a little stressful. There also seems to be a lot of moving pieces and parts that could compromise our somewhat pricey decision to stay here. What if we don’t get a good role, what if we miss some critical Intel and blow the mission. Will this ruin our stay? Needless to say, we wouldn’t run into these issues at any other resort. 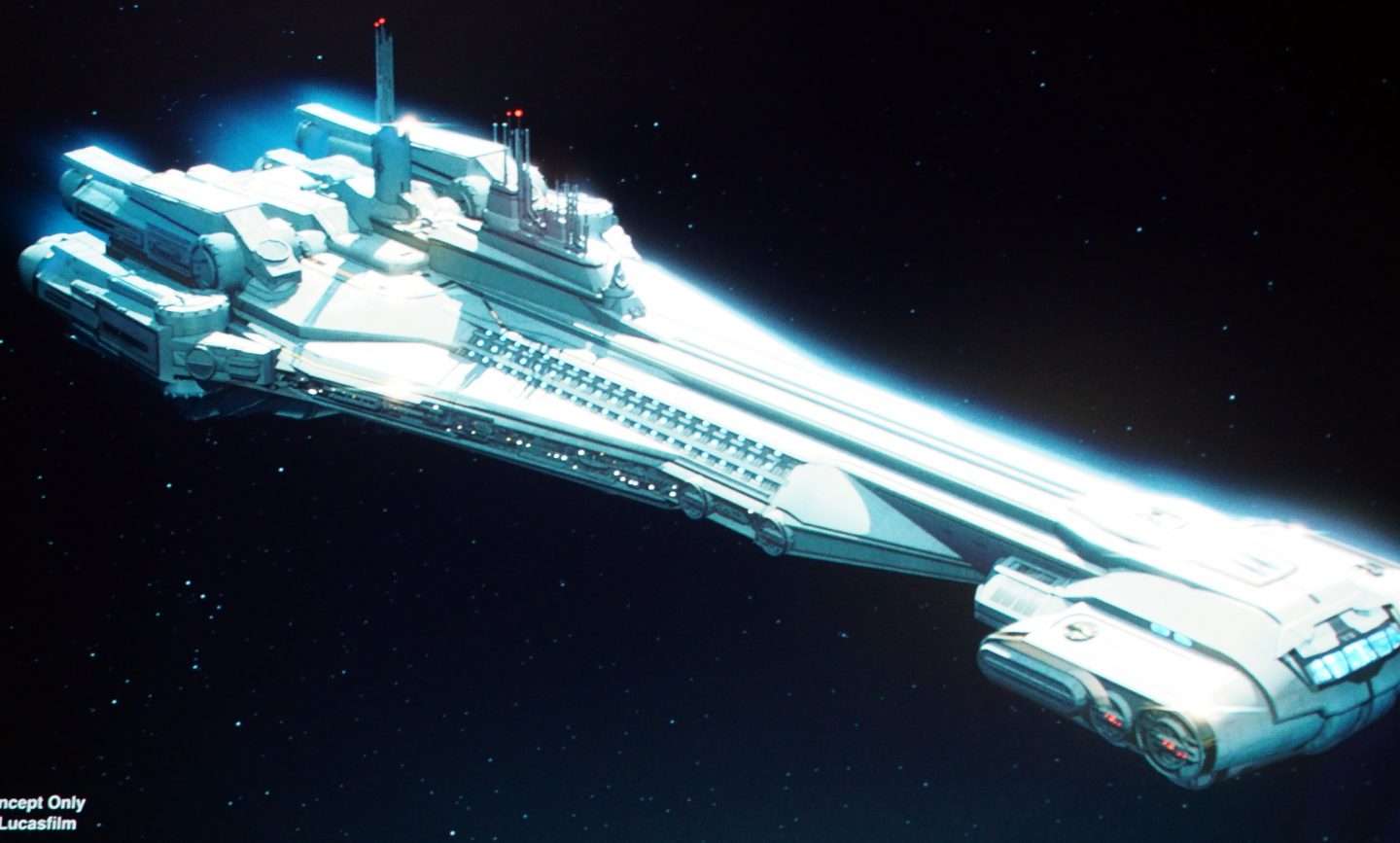 Will you stay at the Disney Star Wars Hotel Galactic Starcruiser Hotel?

What do you think? Will you be biting at the bit to get a cabin of your very own when the hotel launches? Let us know! Ready to sign up for your own adventure? Sign up here to get alerts and be the first to know when the hotel is ready. 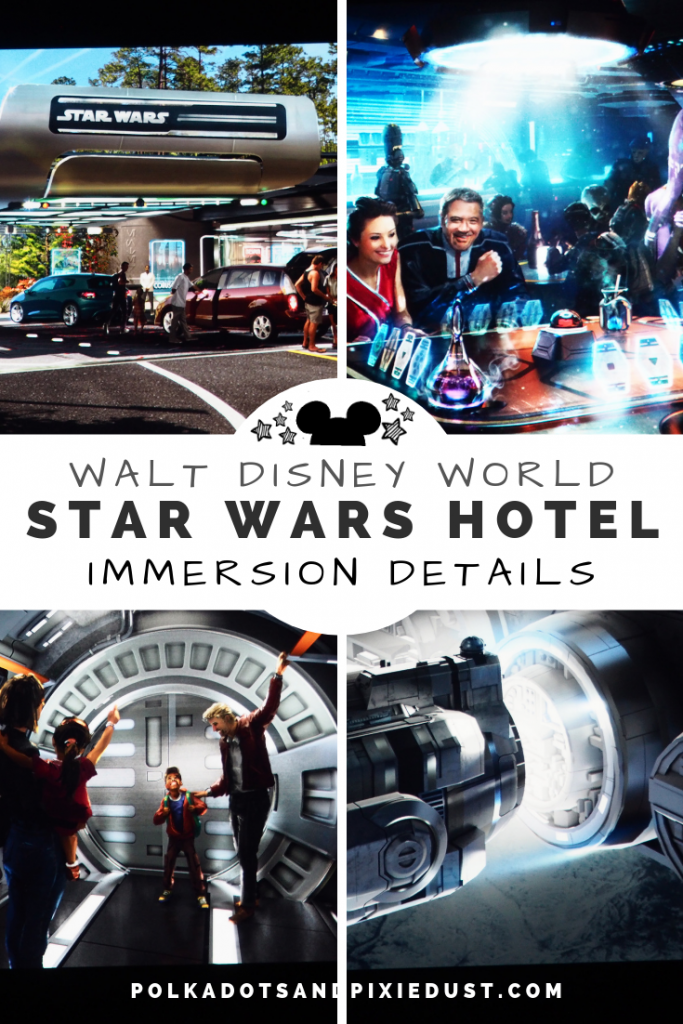