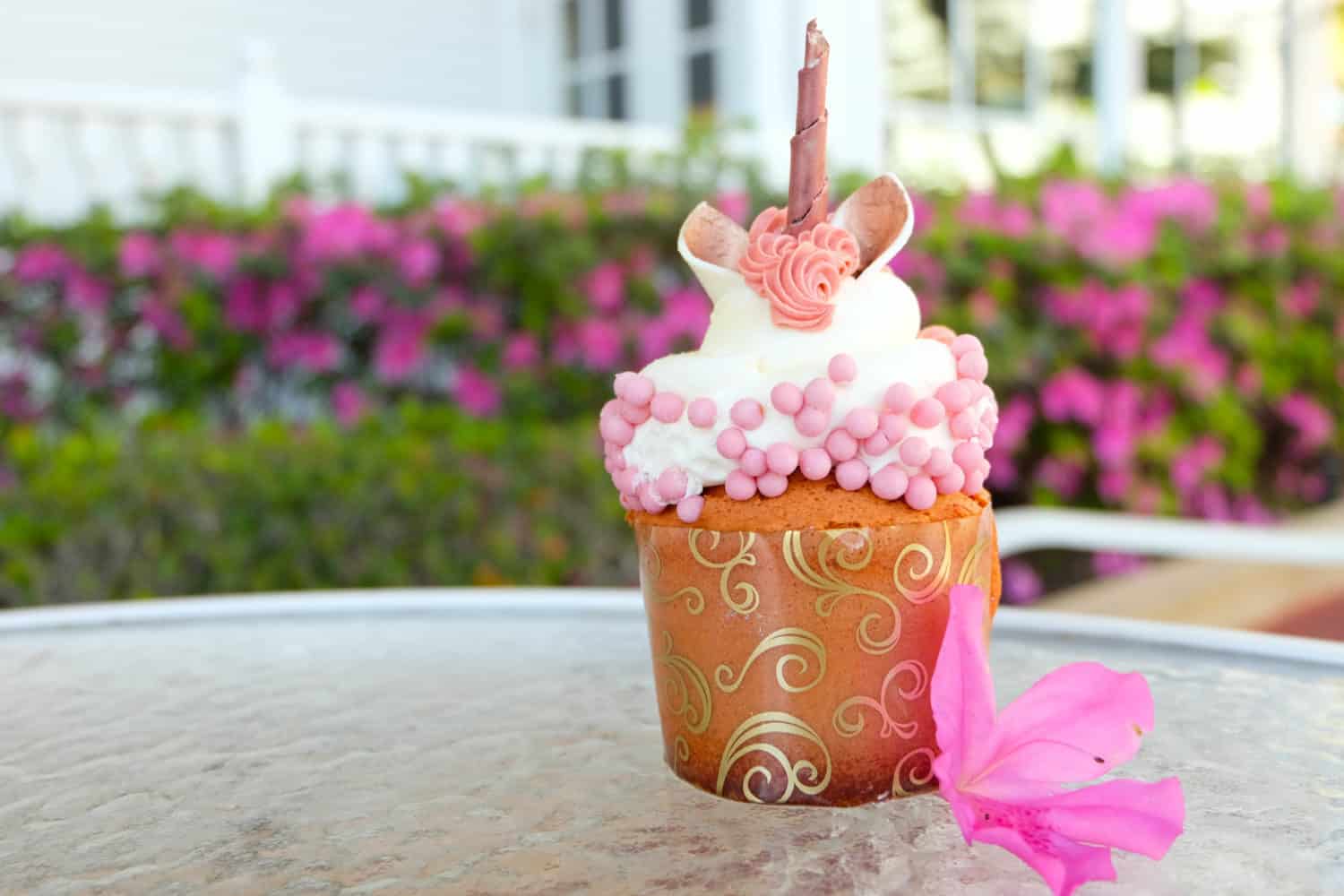 I’m going to be honest here guys. We are loving the Rose Gold everything phase right now. A little basic? Sure. But I don’t even care. We own rose gold Minnie ears, rose gold jewelry, Disney’s rose gold jerseys and I even had rose gold hair last spring. It’s happy. It’s fun. And we love it. However, I will admit, when Walt Disney World announced their new rose gold cupcake, well, I thought that was maybe going a little too far.

And then they released another one. And THEN….. they released a bunch of them. All throughout WDW property. Suddenly, we had to have them all. Walt Disney World Marketing Team…. well played.

So when we booked a slightly last minute trip to the happiest place on Earth to be there for the start of the Flower and Garden Festival, we thought this would be the perfect opportunity to take ourselves on a Rose Gold Cupcake Tour. All in the name of research of course. 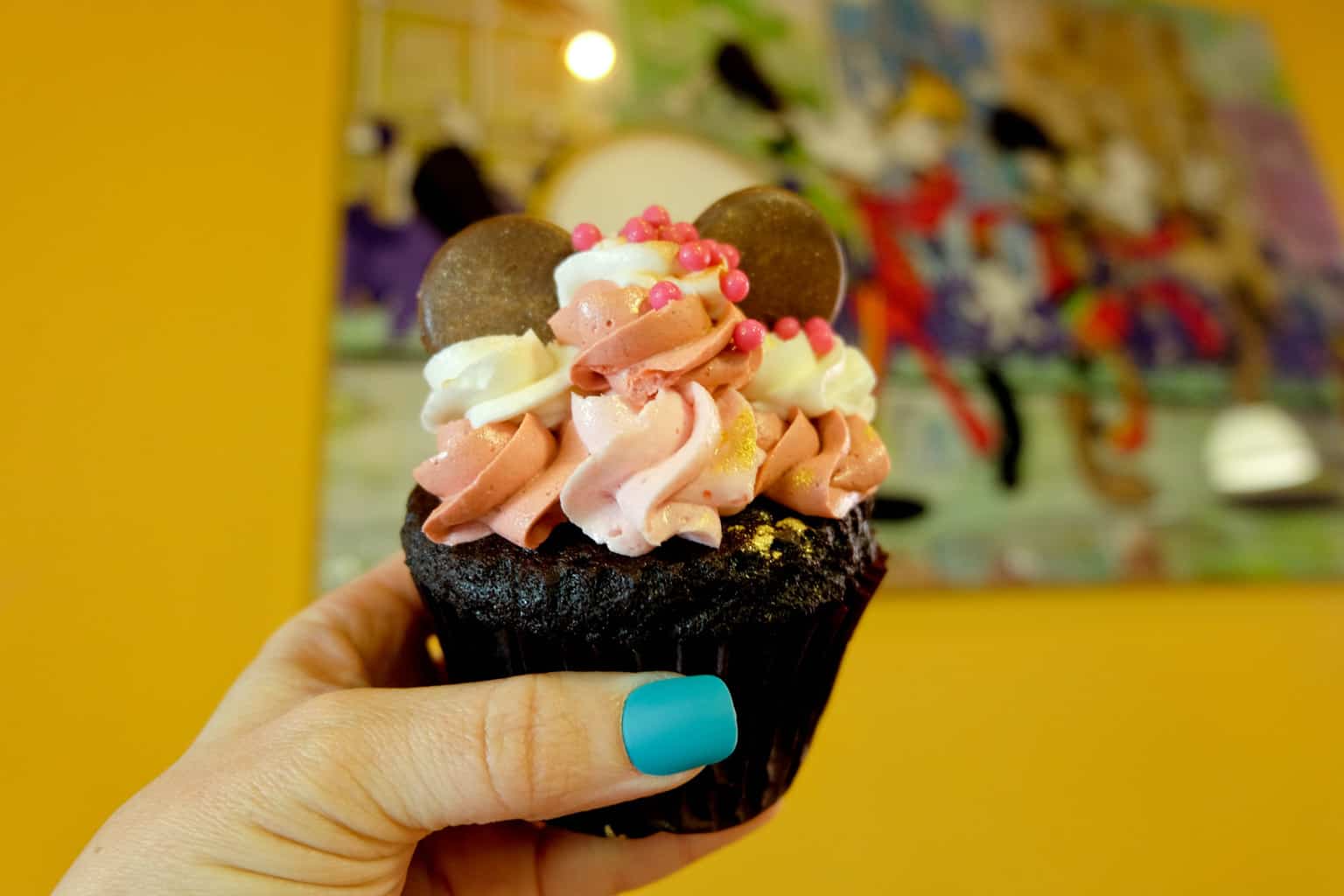 We found the initial list from  The Disney Food Blog and used that as a guide to hunt these rose gold beauties down.  Before we begin, let me start by saying that each of these cupcakes were $5.49 and some of the shops let you use a Passholder discount and others didn’t. This is no small feat for your wallet or your waistline folks. Luckily, between Rochelle, G and myself, we were able to share them and I like to think that the 10+ miles we walked each day helped burn off some of those rose gold calories. 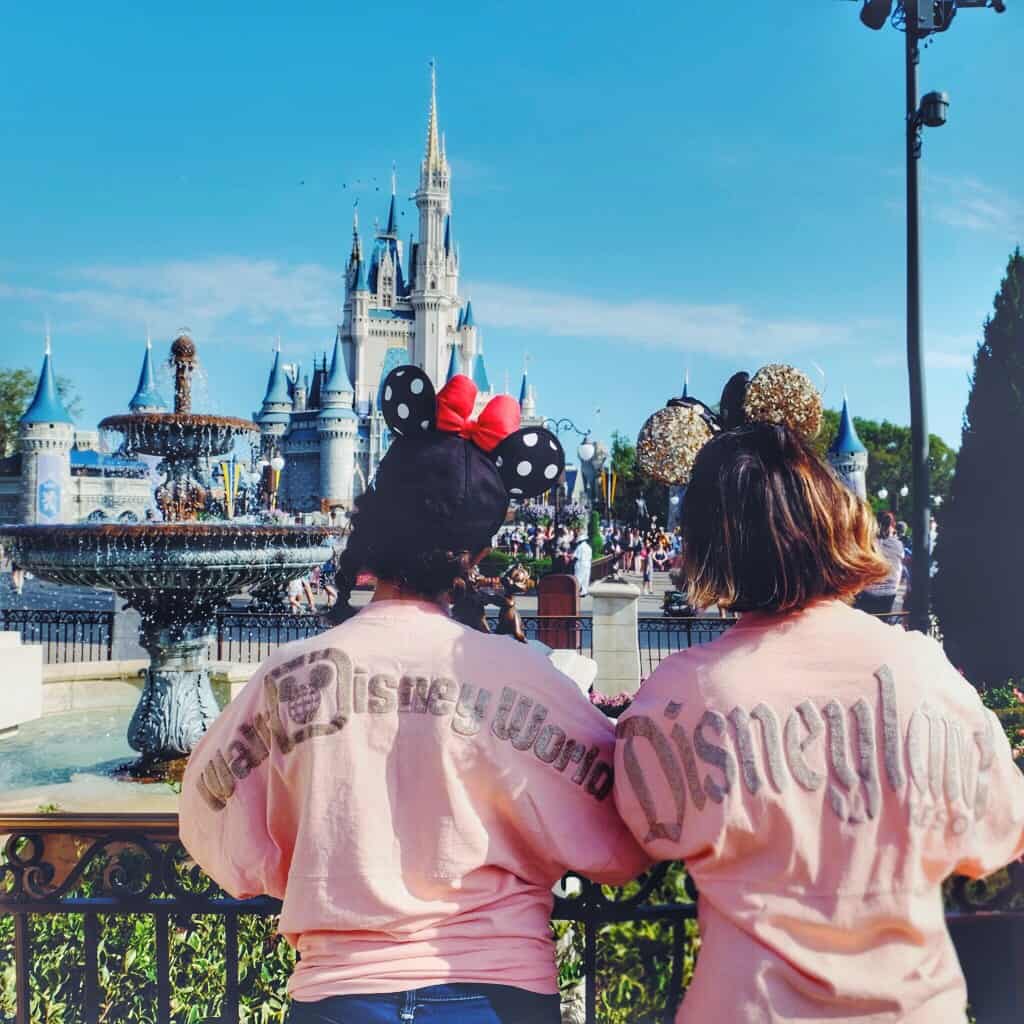 We’ll start in the Magic Kingdom. Definitely not the prettiest(sorry Starbucks), this cupcake can be found at the Main Street Bakery AKA Starbucks. I recommend getting it a bit earlier in the day, as it seemed like they usually sold out after dinner. This one is a Rose Gold Velvet Swirl with buttercream icing and chocolate crispy pearls and chocolate Minnie Ears. Honestly, it was good, but also just a standard cupcake really, that they dressed up beautifully. 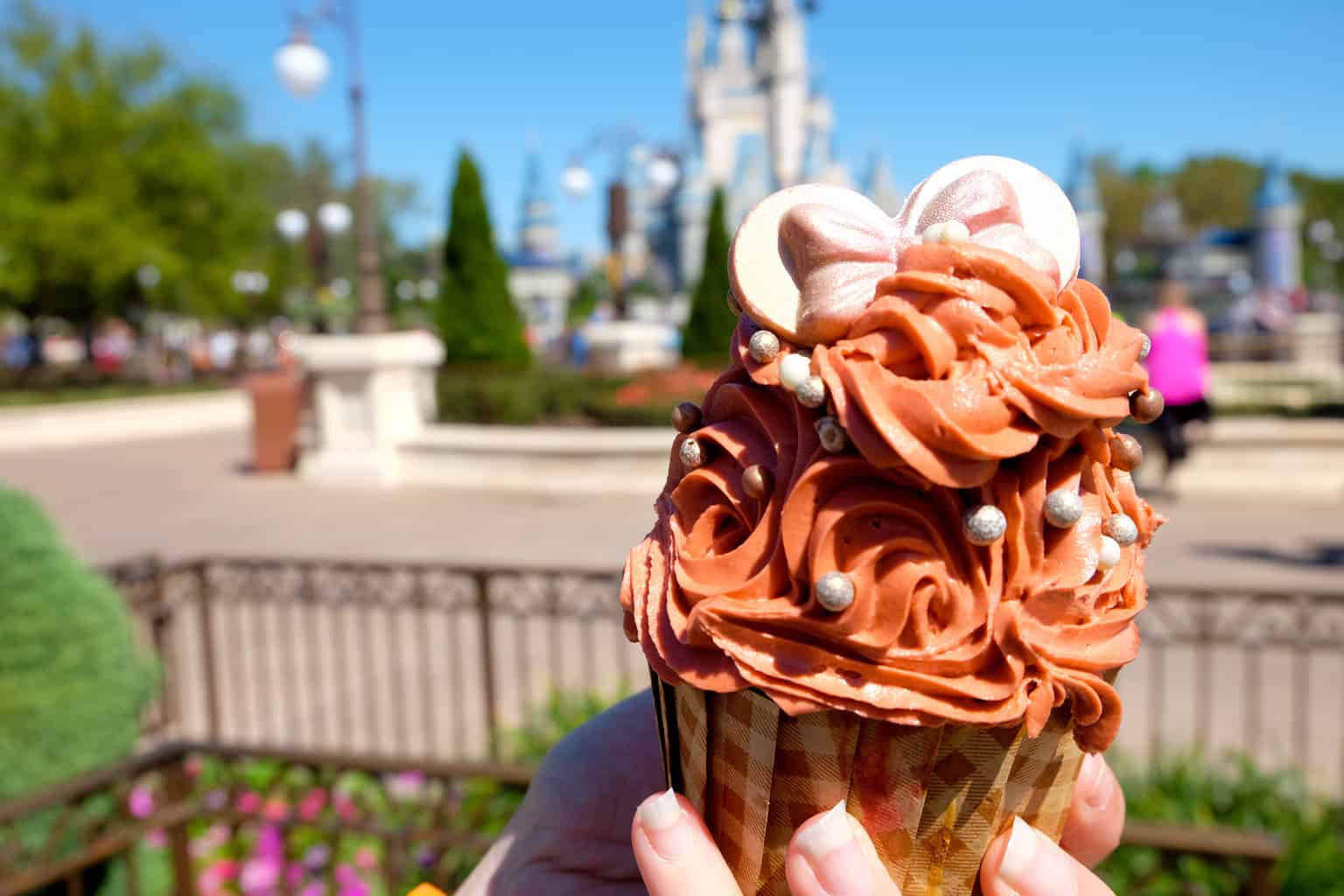 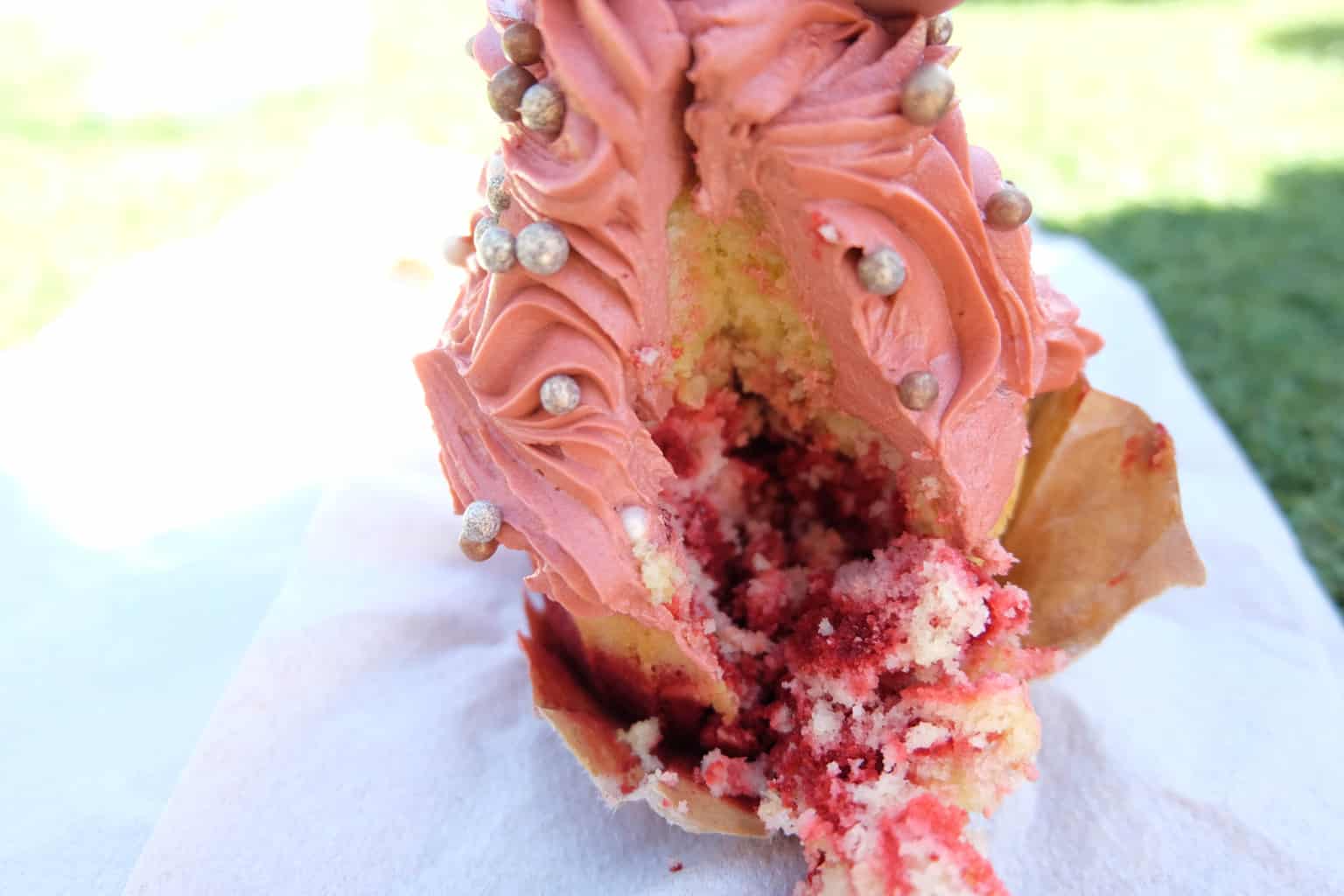 If you’re not looking for anything over the top or unique, its perfect. Tip: Ask them not to close the lid on the cupcake container. We saw a few with closed lids and they looked like a big mess so we opted to keep ours looking pretty and kept the lid off.

Alright, so now let’s take a ride on the monorail, as all three(YES ALL THREE) monorail resorts have their very own Rose Gold Cupcake. In true monorail fashion, the Contemporary is the first stop. Head downstairs to the Contempo Café. 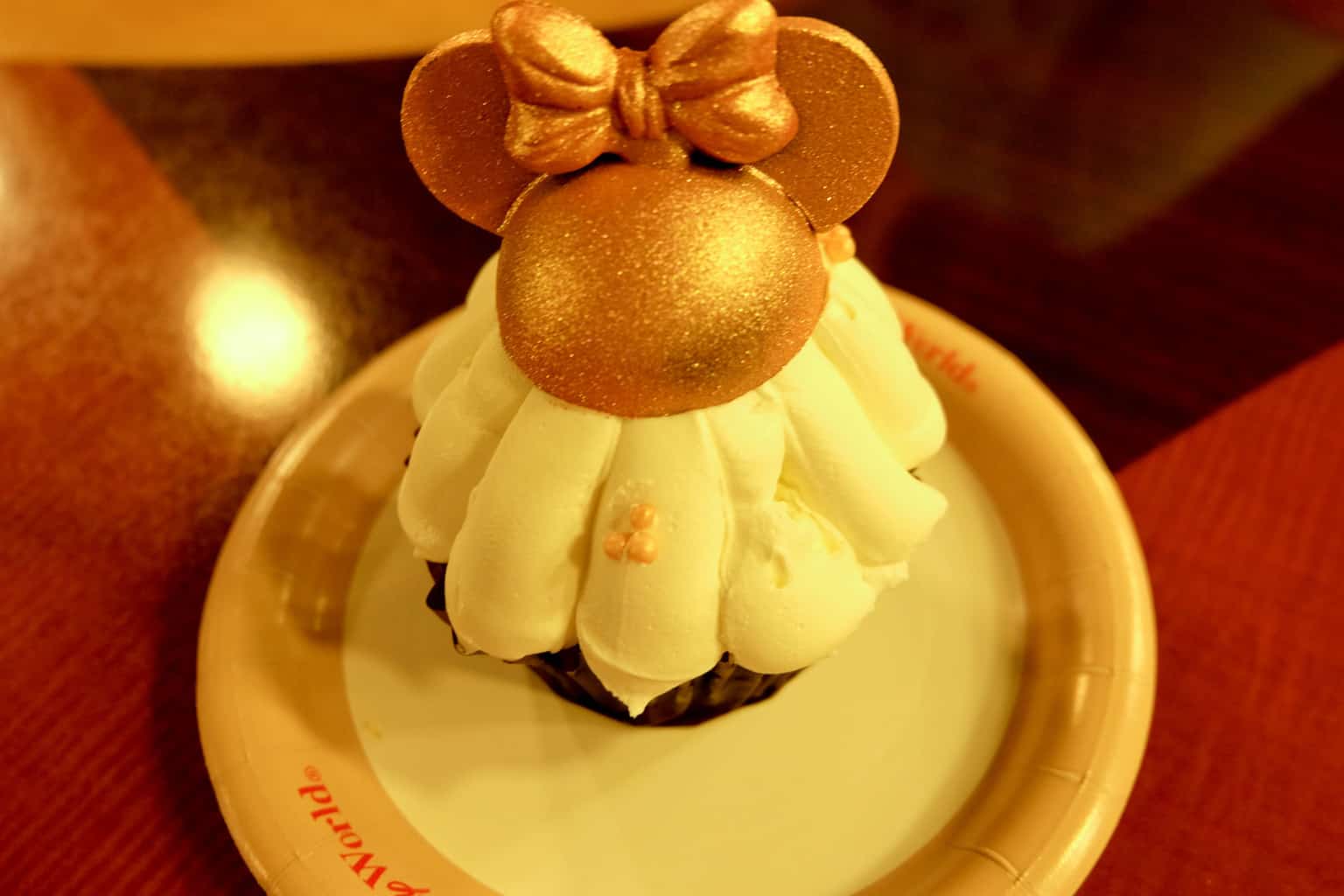 This one was probably one of our favorites, if not our favorite. First of all, it is gorgeous. The sparkle alone was worth the purchase. I’m pretty sure everyone sitting at nearby tables at the Contempo Café was staring. Its that pretty. Or who knows, maybe they thought we were strange for making such a big deal over a cupcake. 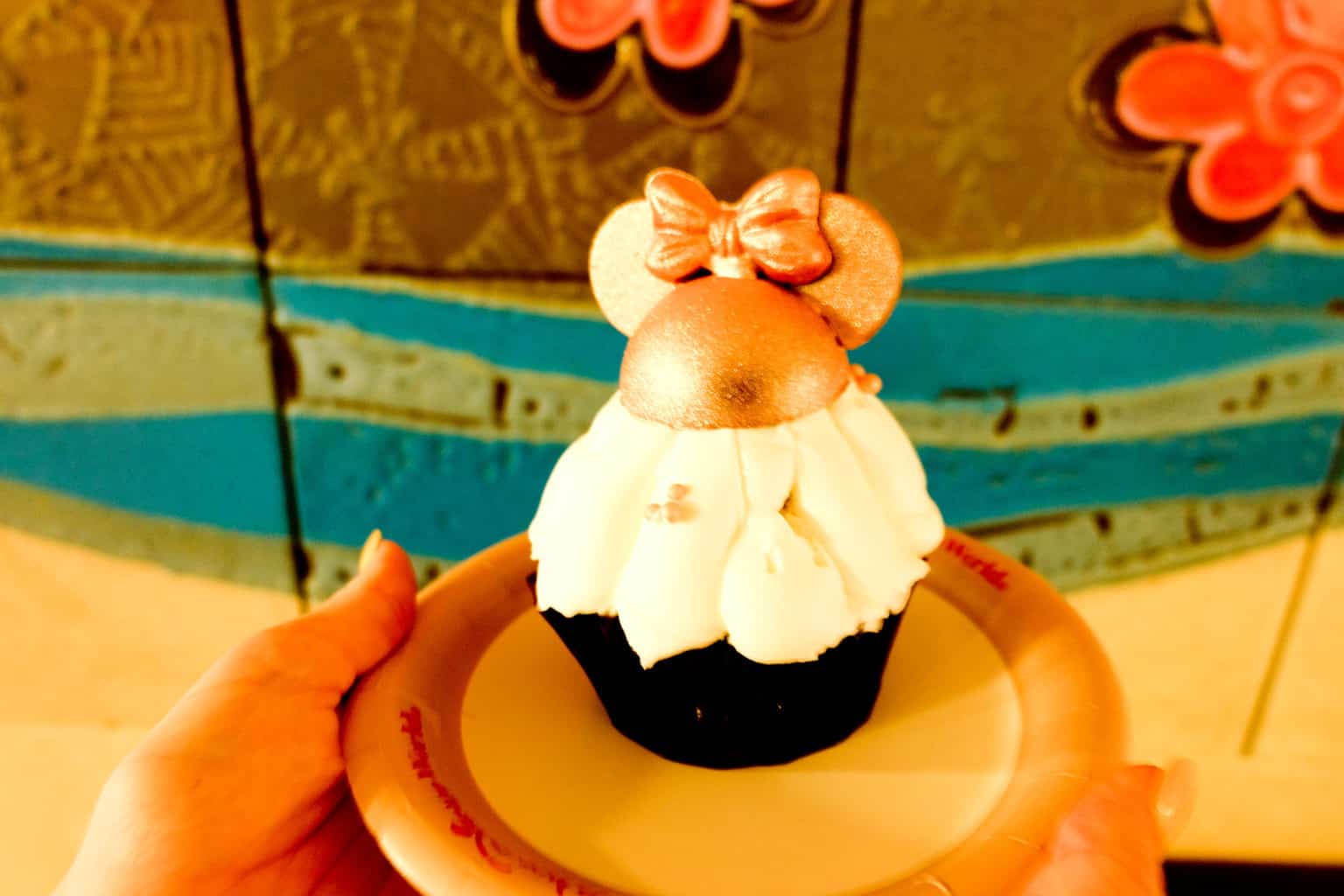 So what makes this one so special? It’s a vanilla cupcake, with strawberry filling, vanilla buttercream and strawberry crispy pearls. YUM.  And that pretty hat on top? Dark chocolate. Seriously so so good.

Next Stop, Captain Cook’s at the Polynesian. Here you can find Vanilla cupcakes with guava pastry cream and I believe that cute little topper was marshmallow fondant. Another one of our favorites! This was actually the first one we had on our trip and honestly it was one of the more memorable ones. I believe you can also get this at Kona, so if you’re having a meal there be sure to finish it off with one of these delicious little cakes. 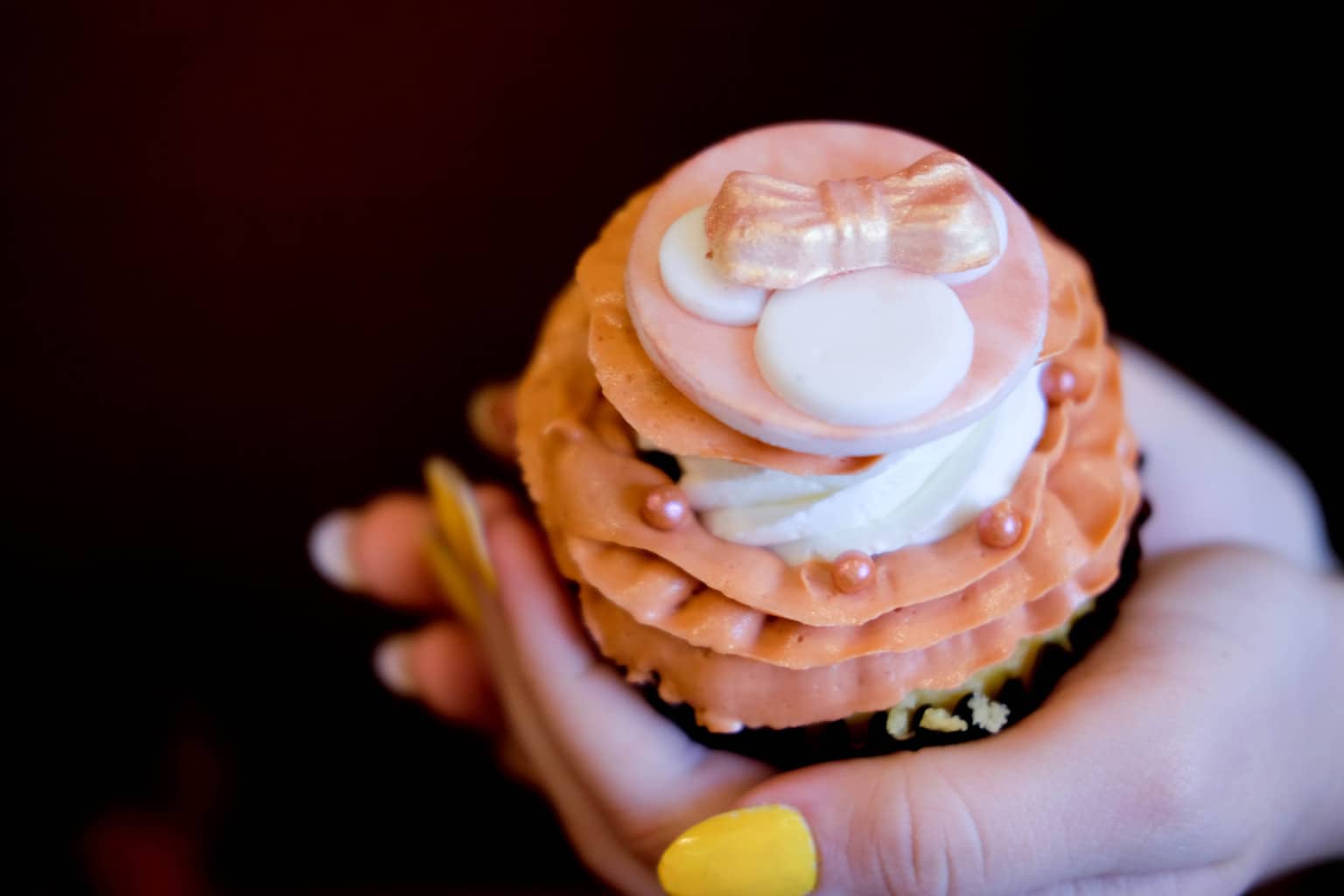 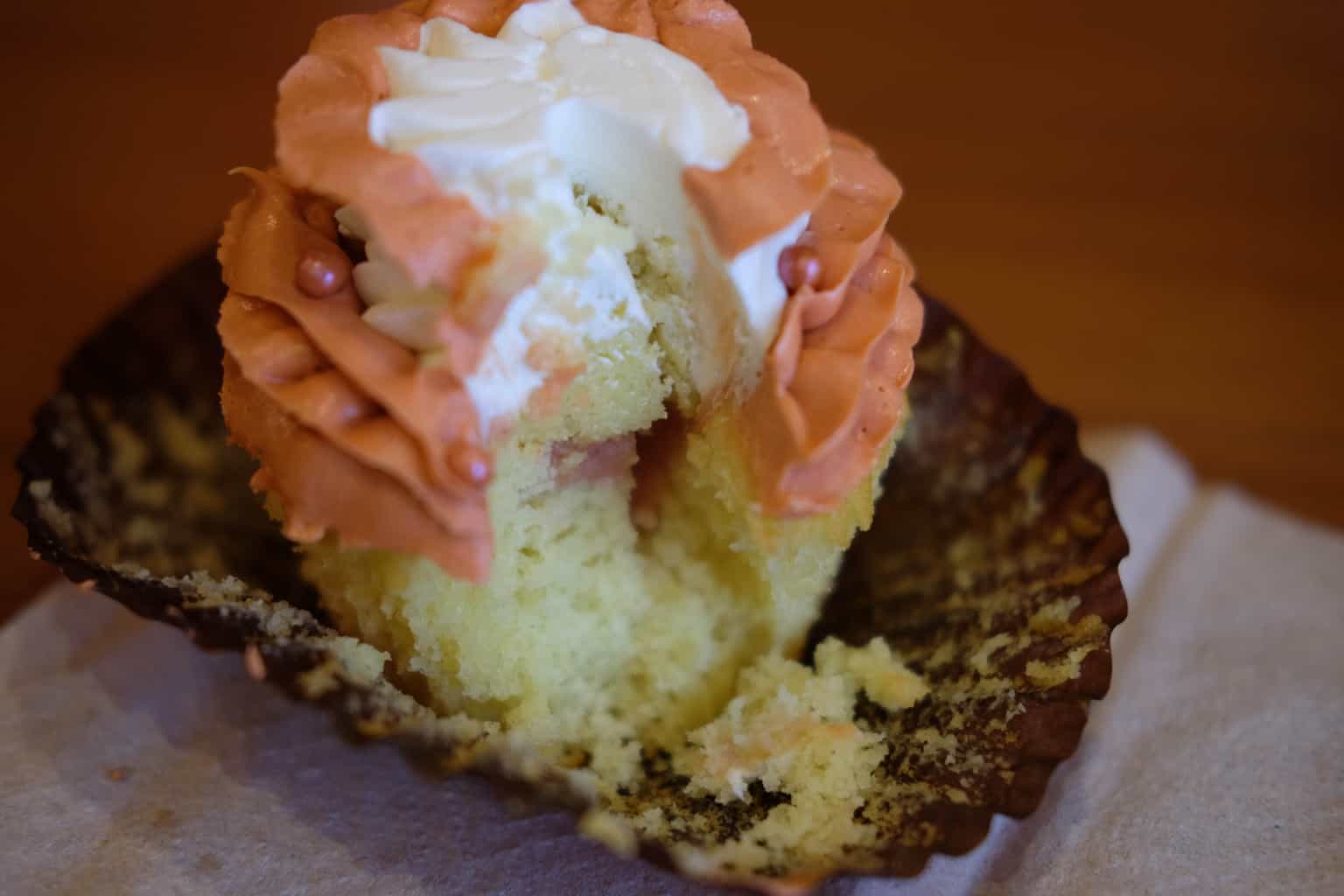 Our last stop on the monorail takes us to the Grand Floridian, where you can get a UNICORN rose gold cupcake. Yes people, you heard me right. Unicorn. Rose Gold. And guess what. Its filled with Hazelnut. What?! 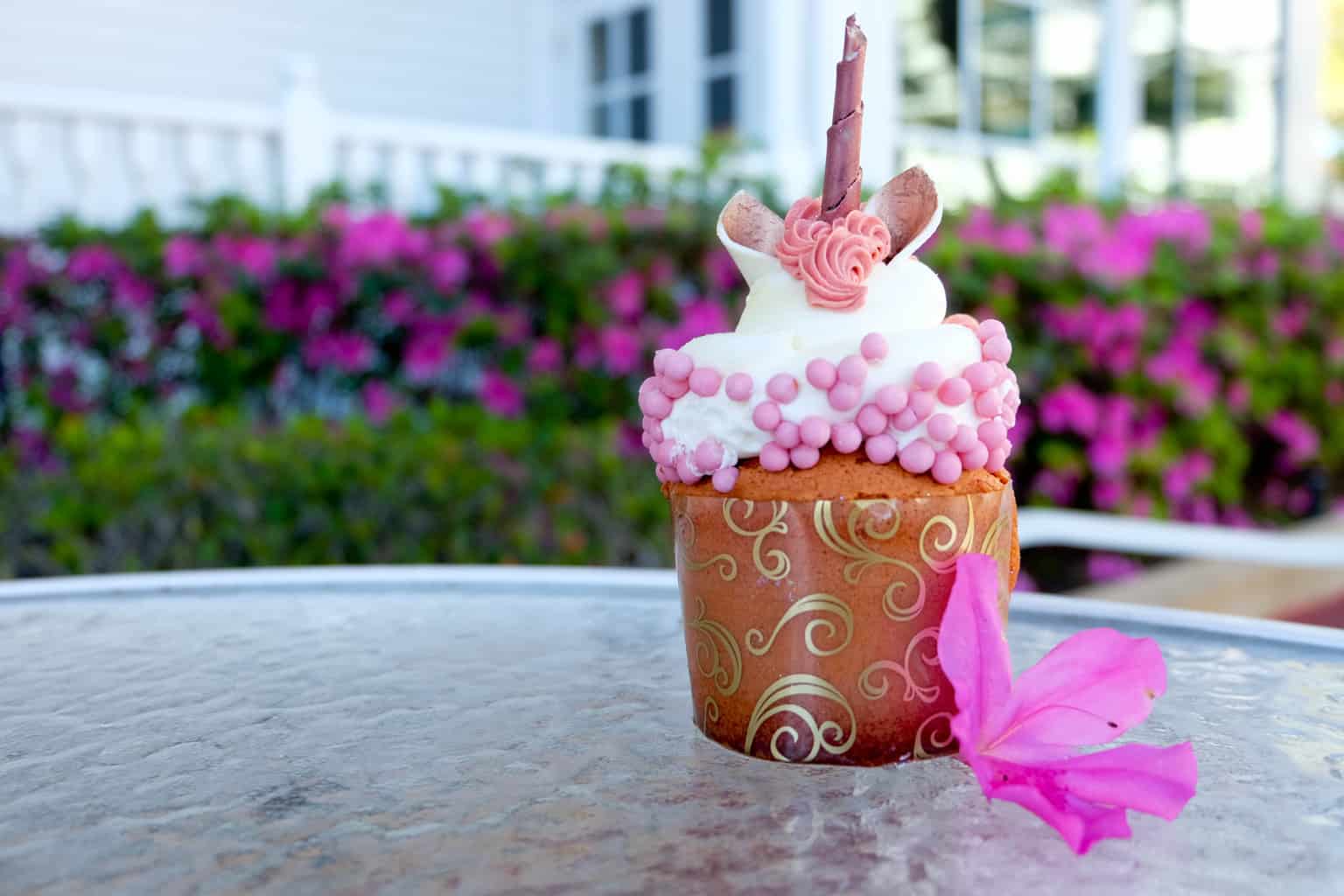 This was definitely one of the prettiest cupcakes, but the hazelnut was a little disappointing. Probably because I think I was secretly hoping for it to be filled with Nutella and it wasn’t. The cupcake is a sponge cake with hazelnut cream cheese filling and vanilla buttercream icing. And you can get it at Gasparilla Island Grill. 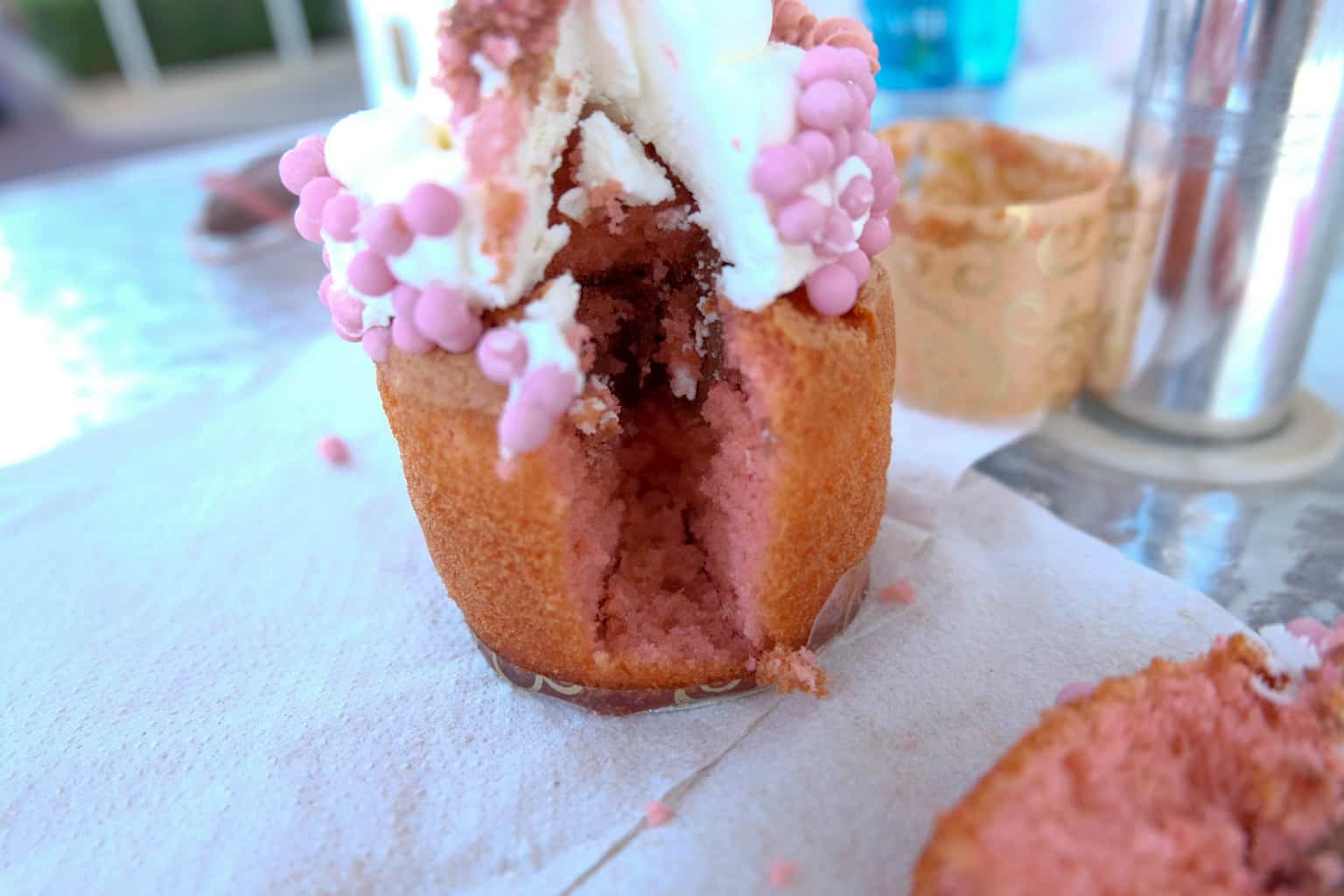 Off to Epcot, at Sunshine Seasons, where you can find what I believe to be the OG in the Rose Gold Cupcake world at Disney. Here you’ll find a vanilla cupcake with hazelnut swirl, essentially a marble cake with vanilla buttercream and fondant ears. This was a pretty standard Disney cupcake in my opinion. Good but really just a pretty cupcake. 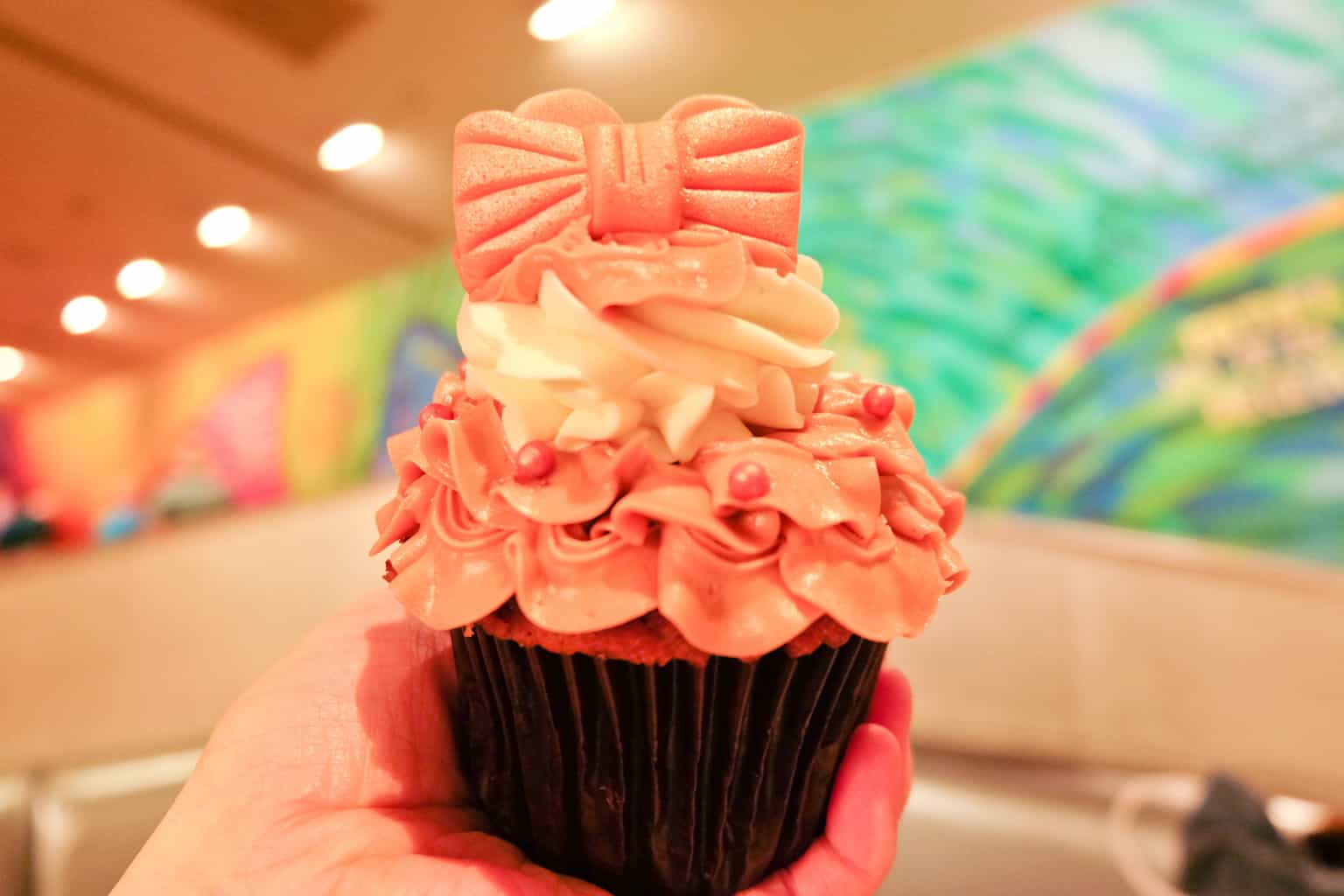 From Epcot, we will head over to one of my favorite spots at Disney, the Boardwalk. The Boardwalk Bakery is pretty well known for their amazing and huge cupcakes. Their version of this cupcake is yellow cake with rose mousse, whipped cream frosting topped with dark chocolate rose gold Minnie ears and rose gold crispy pearls. This was another one of our top cupcakes because the frosting was so light and the flavors really blended well together. And just look at how pretty it is. 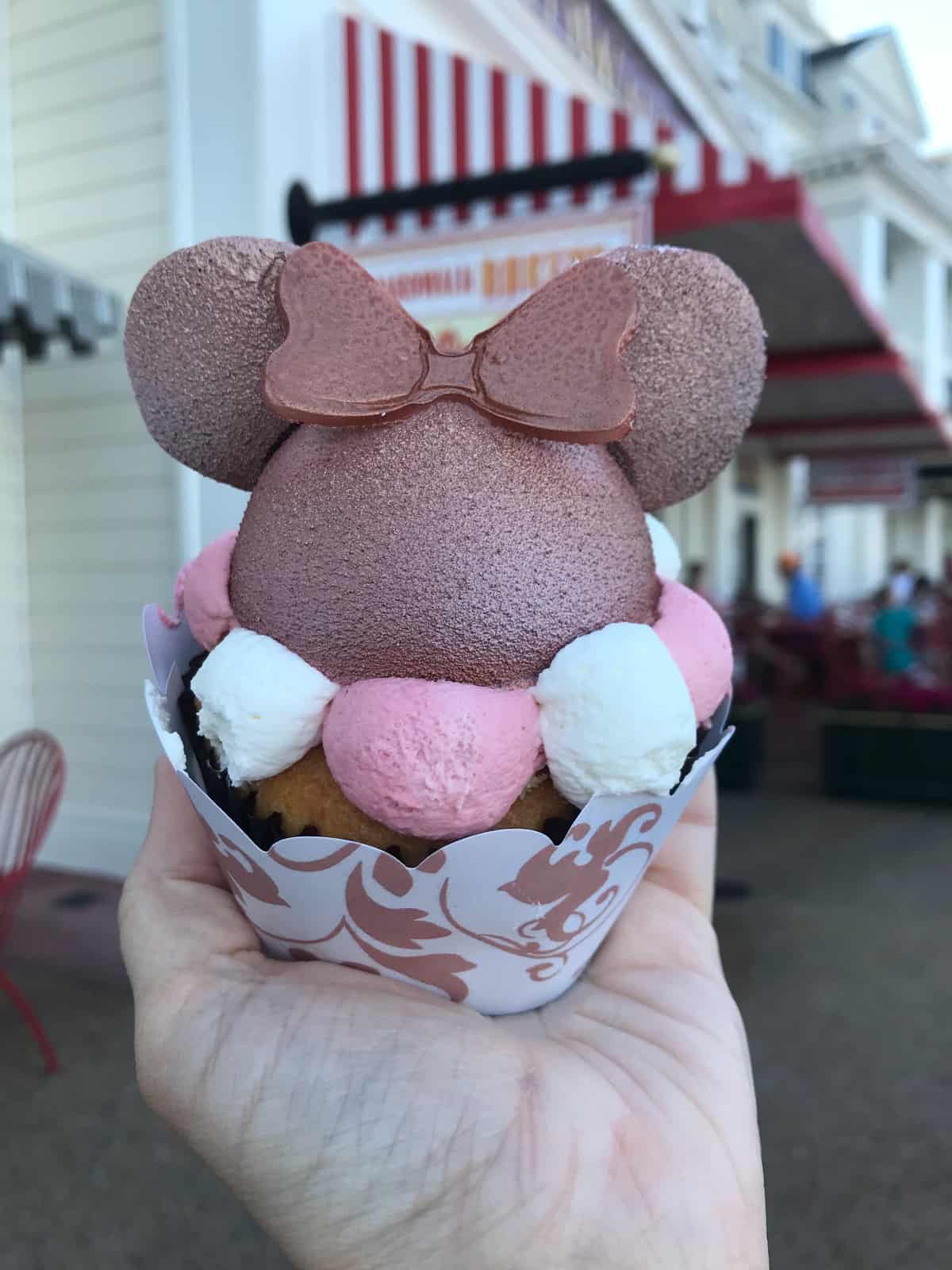 Walk over to the Beach Club and check out their Marketplace for the next Rose Gold Cupcake. You can get this same cupcake over at Ale and Compass Marketplace if you prefer the Yacht Club. Its a Strawberry Chocolate Mousse Cupcake with a strawberry mousse dome and strawberry buttercream icing. This was pretty underwhelming. Not only was it the smallest cupcake we tried, but the strawberry dome made the whole cupcake kind of, well….. wet. If you simply must try them all, go for it, but if you have plans of only trying one or two, this can be skipped. 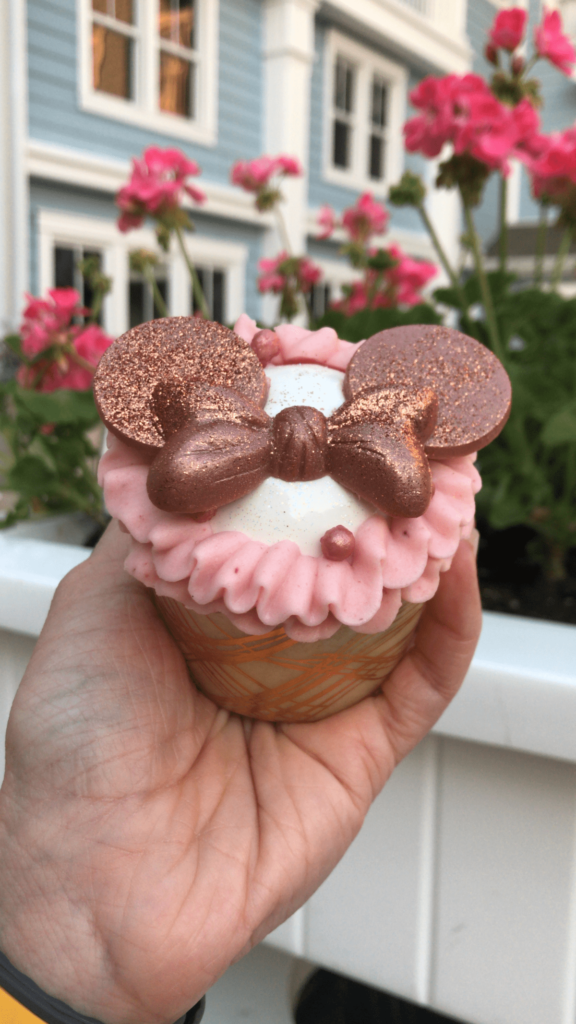 And last but not least, our rose gold adventure took us to a resort we were not staying at. We stopped by Intermission Food Court at All Star Music Resort because it was the closest to us at the time, but you can also find this cupcake at Old Key West as well as Saratoga Springs. This cupcake was a chocolate cupcake with strawberry buttercream filling and icing. This cupcake also has the chocolate ears. Very good cupcake, however, again nothing really too special that it would warrant a visit unless you’re trying them all or staying at a particular resort selling them and you’re looking for a sweet snack.

Sadly, that brings our rose gold adventure to a close. We did miss out on a cupcake at Hollywood Studios at the Trolley Café simply because we hadn’t planned to go to that Park and I was later told that Mara at Animal Kingdom Lodge also had a rose gold cupcake. Don’t worry though, we already have plans to try those when we return in May.

Be sure to follow us on Instagram and if you try a rose gold cupcake or find a new one, tag us! We want to know which ones you like!