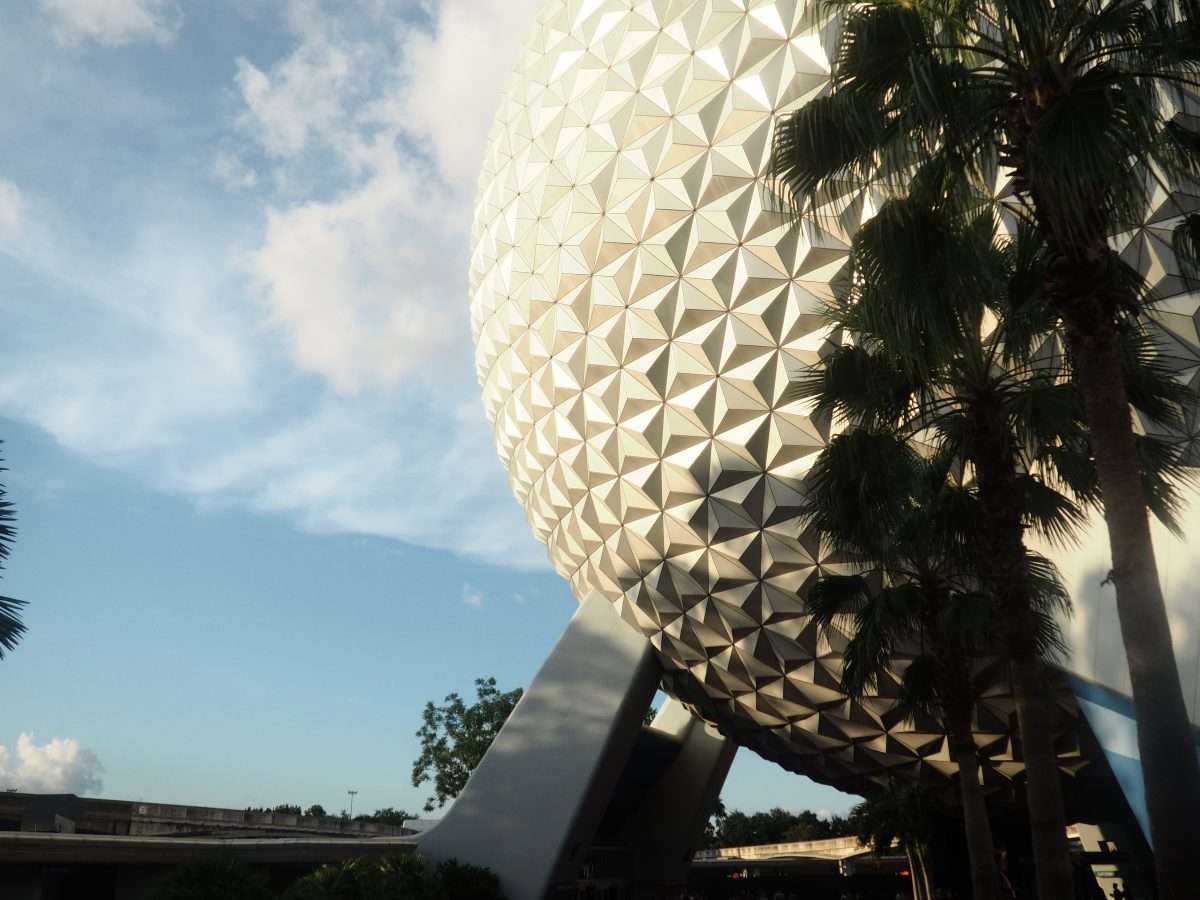 Spaceship Earth previously supposed to close May 26 so that Spaceship Earth could get a face lift, is now operating as normal. No plans to close or refurbish the attraction at preset. As this is one of the construction projects at Walt Disney World in 2020 that has been cancelled. As part of the larger EPCOT revamp was planned to complete by 2022 just in time for the 40th Anniversary of the park. So, with the arrival of refurbishments galore at Walt Disney World EPCOT, announced at D23 last August, we learned the parks renovations are extensive.  Now, we’re not ones to get too nostalgic, especially since we haven’t actually been Disney vacationers that long ( hey there 2013!). BUT, with the name change back to all caps, EPCOT, the relocation of the Starbucks, and the removal of the Martin Short O’Canada 360 film in all it’s cheesy glory, we decided to get a little sentimental about Spaceship Earth. Plus we’re sharing the full Dame Judi Dench Spaceship Earth Script, so we can revel in Spaceship Earth as we know it a while longer. 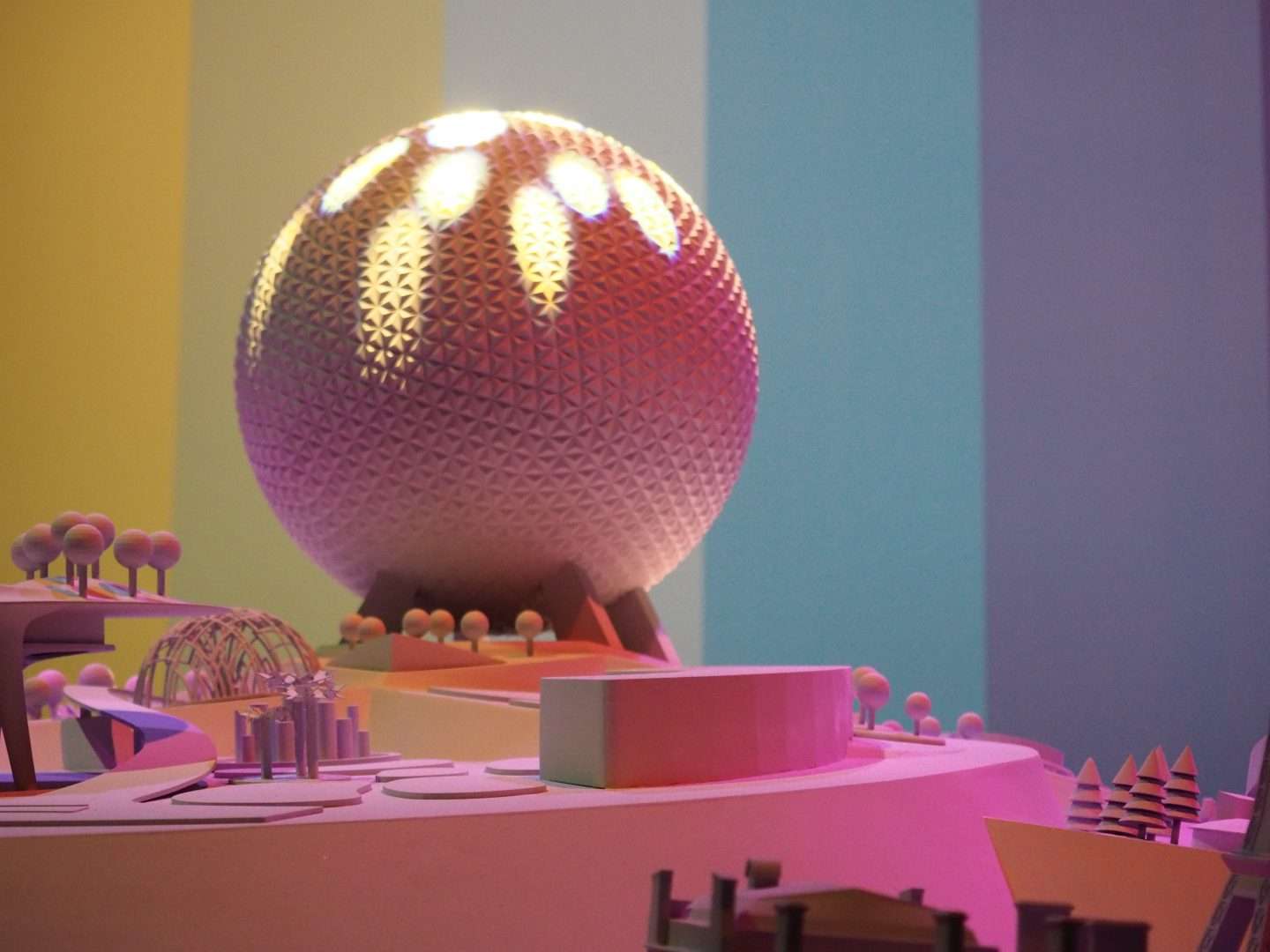 Renovations to Spaceship Earth by 2022? Stated in the original D23 Announcements in 2019. Bob Chapek shared that Spaceship Earth would remain the parks “Grand Icon” and would focus on something that “binds all of humanity together- storytelling.” He also noted that the new attraction would not include  “inventions and technology.” Much as EPCOT’s new future is now about green spaces and our role in saving our planet, together. And less about technological innovation, this comes as no surprise. It also explains why the “Story Light” concept is so integral to the refurbishment.  In fact Chapek said, “many of the scenes you know and love will remain” It is also the reason that this refurbishment is now CANCELLED or at least delayed.

When looking at past refurbishments of Spaceship Earth much of the improvements were subdued. Adjustments of how a scene is shown or which story was shown on the newsreel seen. The addition of the computer garage in the 2008 refurbishment was considered huge, so while we may receive an additional scene, it may not be what we think.

So no matter what is ahead for our beloved Spaceship Earth we’re excited to be on this journey, wherever it may lead:) 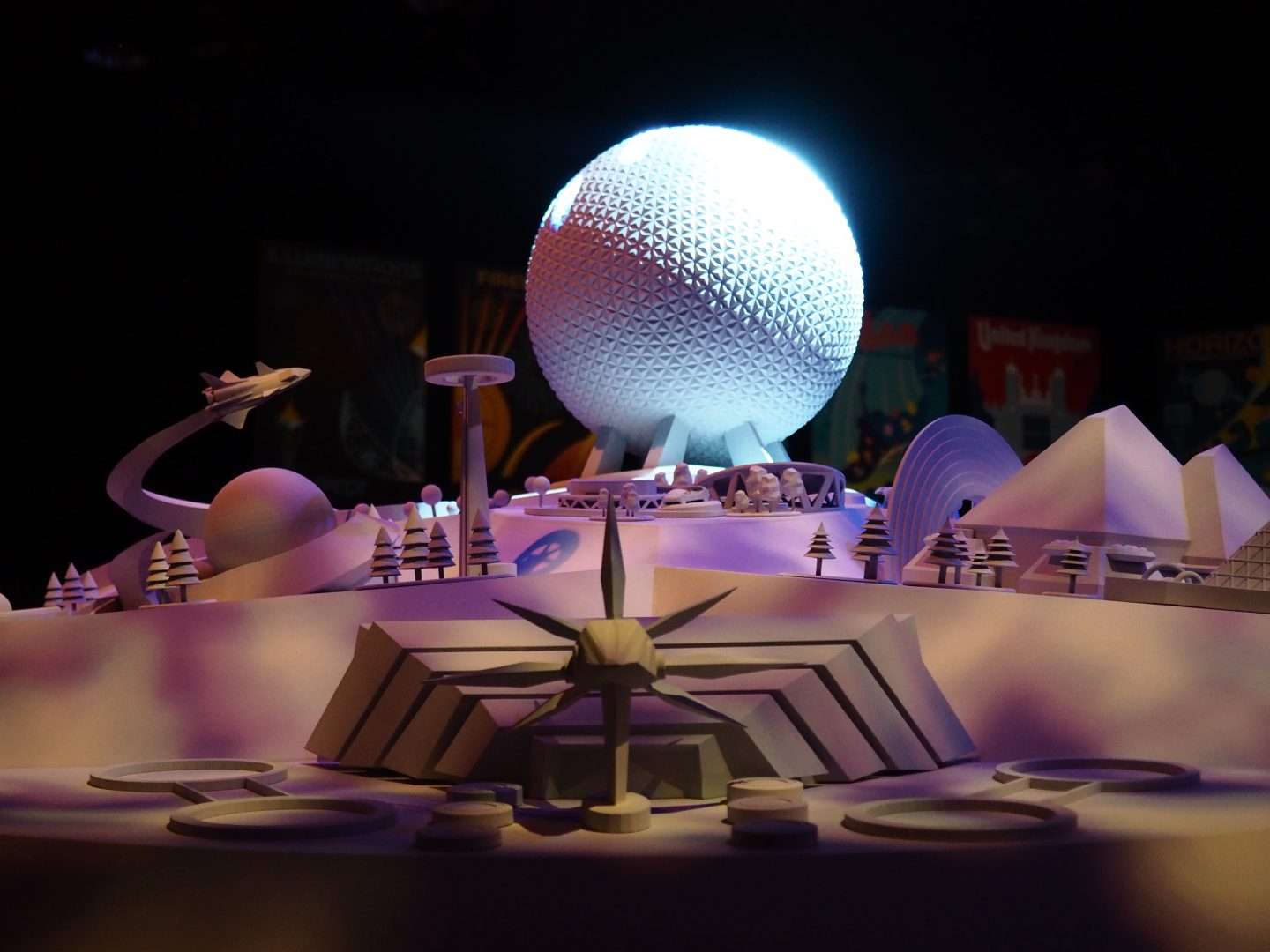 To describe Spaceship Earth as one of our favorite rides at EPCOT is an understatement. Much like how we adore the boat rides pretty much at every Disney park, we can’t get enough of sitting in a slow moving vehicle while someone tells us a story. And the Spaceship Earth story is one that brings tears, joy, triumph, and hope. In truth, our first experience on this ride may have been quite emotional. See, our first trip to Walt Disney World involved taking G out of school to go in the fall for the free dining promo.. A fairly blasphemous idea at the time considering we are an academic family, we were actively looking for the “education” in a theme park vacation. And suddenly there it was, Spaceship Earth rising up from the guilt-filled ashes, promising more knowledge than a public education could possibly provide! Seriously. Best day ever. Suddenly, every hedonistic Mickey-Ear filled decision was justified.

Why we LOVE Spaceship Earth

The crying and laughing that took place during our first ride on Spaceship Earth was just as much about being able to say “hey, we learned stuff” as it was about feeling the horror that there was a time when cavemen had to take down mammoths in the snow. It was about the heat that hits you when you ride past the burning of the Great Library of Alexandria. And the wish that at that moment you want everyone in your life to somehow experience this 50,000 year journey of humanity with you. It becomes unbelievable that we as a species have somehow made it this far. And that we’re literally inventing the future one day at a time, together.

Much like the story that happens within the ride of Spaceship Earth, the actual story about how Spaceship Earth came about is also pretty good. Modeled after the Expo 1967 dome in Montreal the design and story came about with the help of science-fiction genius Ray Bradbury ( Fahrenheit 451 anyone?) and took 26 months to complete. As the Experimental Prototype Community of Tomorrow it was only fitting that a futuristic looking ball be the park’s icon.

As a ride highlighting the Stone Age to the Information Age, Spaceship Earth had many sponsors; Bell Systems, AT&T, and most recently Siemens, whose partner contracted ended late 2017. The ride currently has no sponsor. It’s been renovated 4 times, with the removal and additions of scenes necessary to fine tune the story of our shared human history. Spaceship Earth has seen thus far 4 narrators; Vic Perrin, Walter Cronkite, Jeremy Irons and Dame Judi Dench.  Cam Clarke is the ride narrator instructing that you build your future through the interactive computer screen as you ride. All given their day in the sun as part of the Spaceship Earth history, can we just say we are devastated to lose Dame Jude Dench as our narrator on this ride in this refurbishment. We can only hope Disney chooses wisely in a replacement. 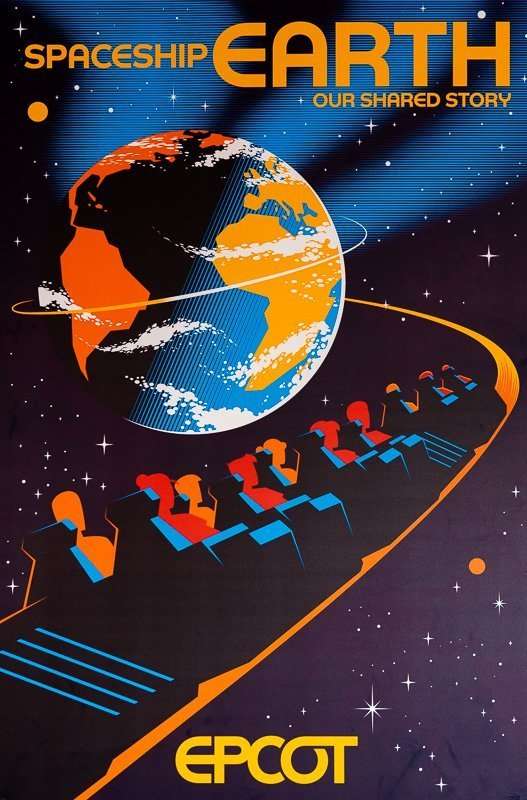 Broken down by the historical events that happen while you travel back in time to learn the history of humanity, we’ve added the current script of the ride below. Hopefully you can not only learn a little about your past, but also use this as needed for your next school project or fun late night party.

Through May 25, 2020. This is the story you experience. We will miss the sound of Dame Judi Dench’s voice immensely (and pray they find a worthy successor).

NARRATOR (DAME JUDI DENCH)
“Like a grand and miraculous spaceship, our planet has sailed through the universe of time; and for a brief moment we have been among it’s passengers. But where are we going? And what kind of future will we discover there? Surprisingly, the answers lie in our past. Since the dawn of recorded history, we’ve been inventing the future one step at a time. So let’s travel back in time together. I’ll show you how our ancestors created the world we know today, and then it will be your turn to create the world of tomorrow.”

Cavemen Working together to Survive 45,000 BC

“Here, in this hostile world, is where our story begins. We are alone, struggling to survive until we learn to communicate with one another. Now we can hunt as a team and survive together.”

Cavemen Tell Stories with Pictures on Walls 30,000 BC

“It takes 15,000 years to come up with the next bright idea: recording our knowledge on cave walls. There was only one small problem, when we moved, the recorded knowledge stayed behind.”

“Now, let’s move ahead to ancient Egypt, because something is about to happen here that will change the future forever. This unknown Egyptian pounding reeds flat is inventing papyrus—a sort of paper. Papyrus, in turn, creates better record keeping of plans, designs, and unfortunately taxes. But it also brings with it the dawn of great civilizations.”

Invention of a Shared Language. Thank the Phoenicians 1100 BC

“At this point, each civilization has its own form of writing, which none of the others can understand. But the Phoenicians, who trade with all of them, have a solution. They create a simple, common alphabet, adaptable to most languages. Remember how easy it was to learn your ABC’s? Thank the Phoenicians—they invented them.”

“The ancient Greeks were great inventors of the future. First, they established public schools, and then begin teaching an intriguing new subject called mathematics. And with math comes mechanical technology and the birth of a high-tech life we enjoy today.”

“With lessons learned from the Greeks, the Romans create a powerful empire. To move their armies around, they build a system of roads all over the known world. Rome built the first “world wide web,” and it’s leading us into the future.”

Loss of scrolls at the Great Library of Alexandria 48BC

“But then we hit a roadblock—Rome falls, and the great Library of Alexandria in Egypt is burned. Much of our learning is destroyed—lost forever… or so we think. It turns out there are copies of some of these books in the libraries of the Middle East, being watched over by Arab and Jewish scholars. Call it the first backup system. The books are saved, and with them our dreams of the future.”

“In the meantime, here in Europe, monks toil endlessly, recording books by hand—but that is about to change.”

“In 1450, Gutenberg invents the movable type printing press. Now knowledge can travel as fast as these new books… and travel they do.”

“Books make it easier to invent the future in every field, and the result is an incredible explosion of innovation that we call the Renaissance.”

“Books, it seems, were just the beginning. Now communication technology races headlong into the future, and soon people all over the world are sharing life’s most important moments faster than ever before.”

“Extra! Extra! Read all about it! Lee surrenders at Appomattox! Civil War is over! Extra! Extra!” ( Paper Boy)

And today, we received word that Amelia Earhart has landed safe and sound in Wales. Today, July 19th, 1948, will forever be known as the day that she flew across the Atlantic and into the hearts of people around the world. Amelia Earhart has gone where no other woman has gone before! ( Radio Announcer)

“By now, we’re all communicating from anywhere on Earth—and in 1969, from somewhere else.”

“It’s one small step for man; one giant leap for mankind.” ( Neil Armstrong)

“To send a man to the moon, we had to invent a new language, spoken not by man, but by computers—at first very large, very expensive computers—but we see the potential.”

“What if everyone could have one of these amazing machines in their own house? There’s just one problem: they’re as big as a house. The solution comes in, of all places, a garage in California. Young people with a passion for shaping the future put the power of the computer in everyone’s hands. Together, we form a super network that goes with billions of interactions, and once again we stand on the brink of a new Renaissance.

After 30,000 years of time travel, here we are—a truly global community, poised to shape the future of this, our Spaceship Earth.”

“For the first time in history, all of us can have a say about the kind of world we want to live in. The choices we have made for the past 30,000 years have been inventing the future one day at a time. And now, it’s your turn. Let’s have some fun creating the future, shall we?”

“So here’s to the next 30,000 years on Spaceship Earth. While no one knows for sure what we’ll see or do, I do know it will be quite an adventure—an adventure that we’ll take and make together. See you in the future!” 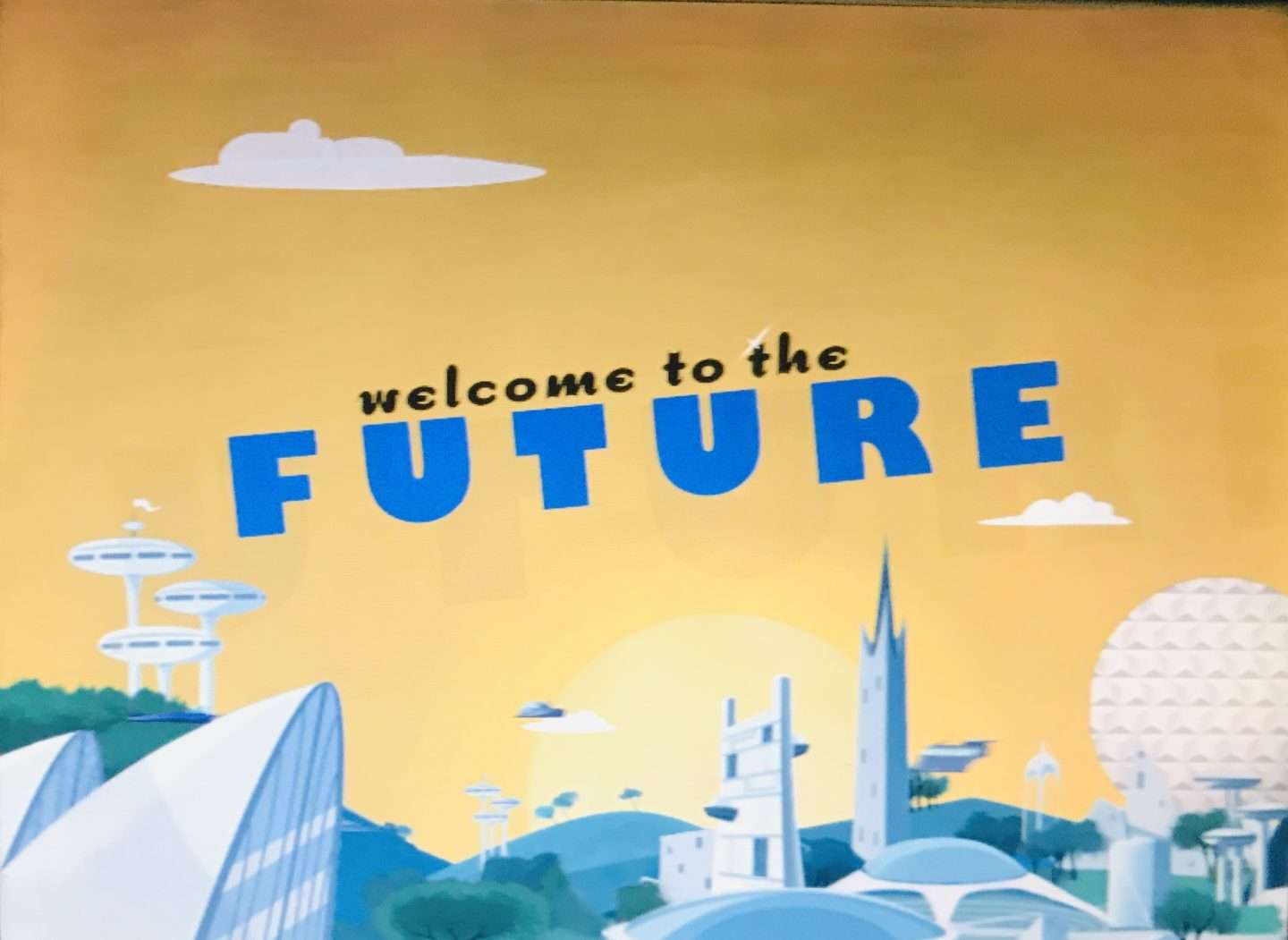 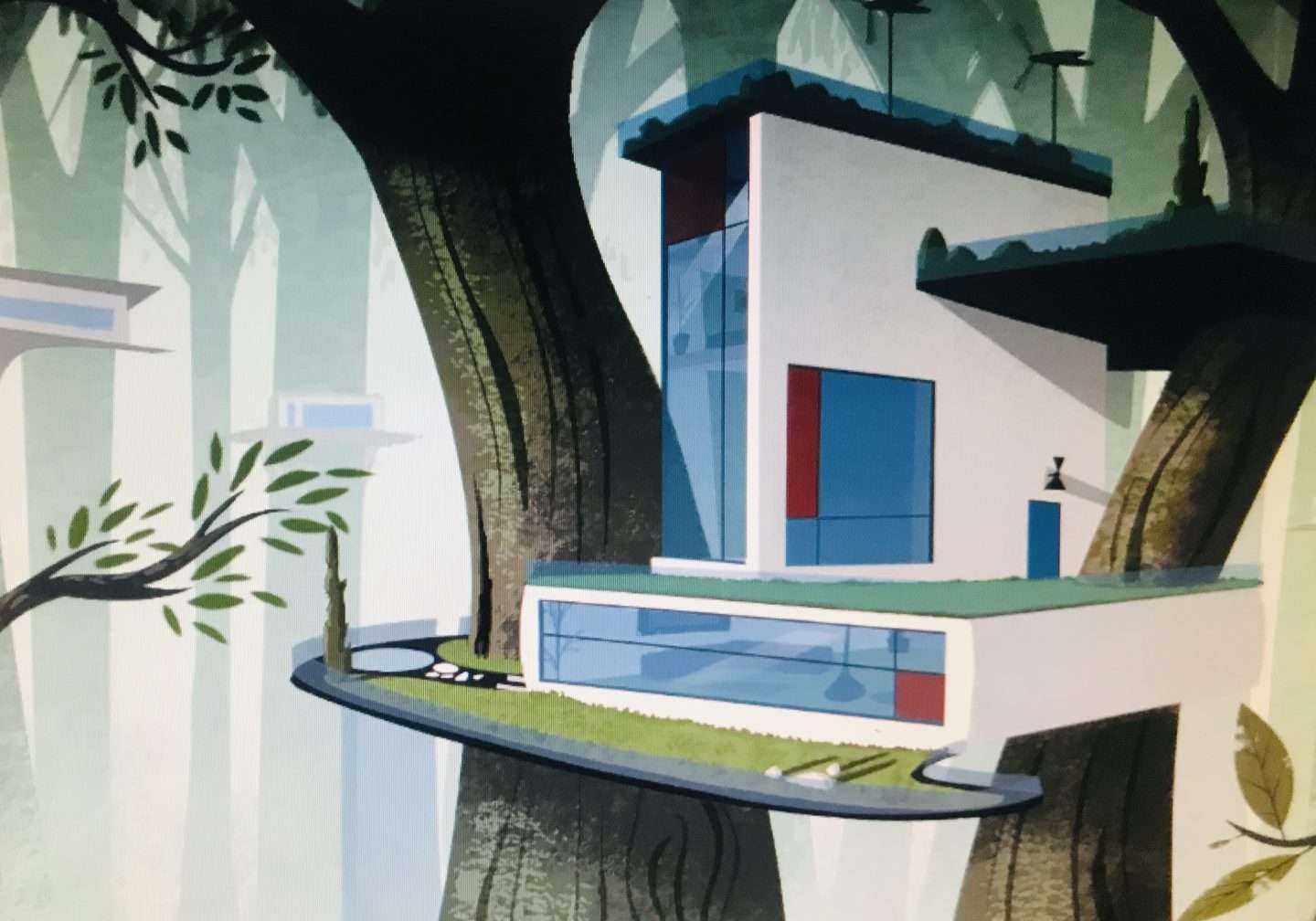 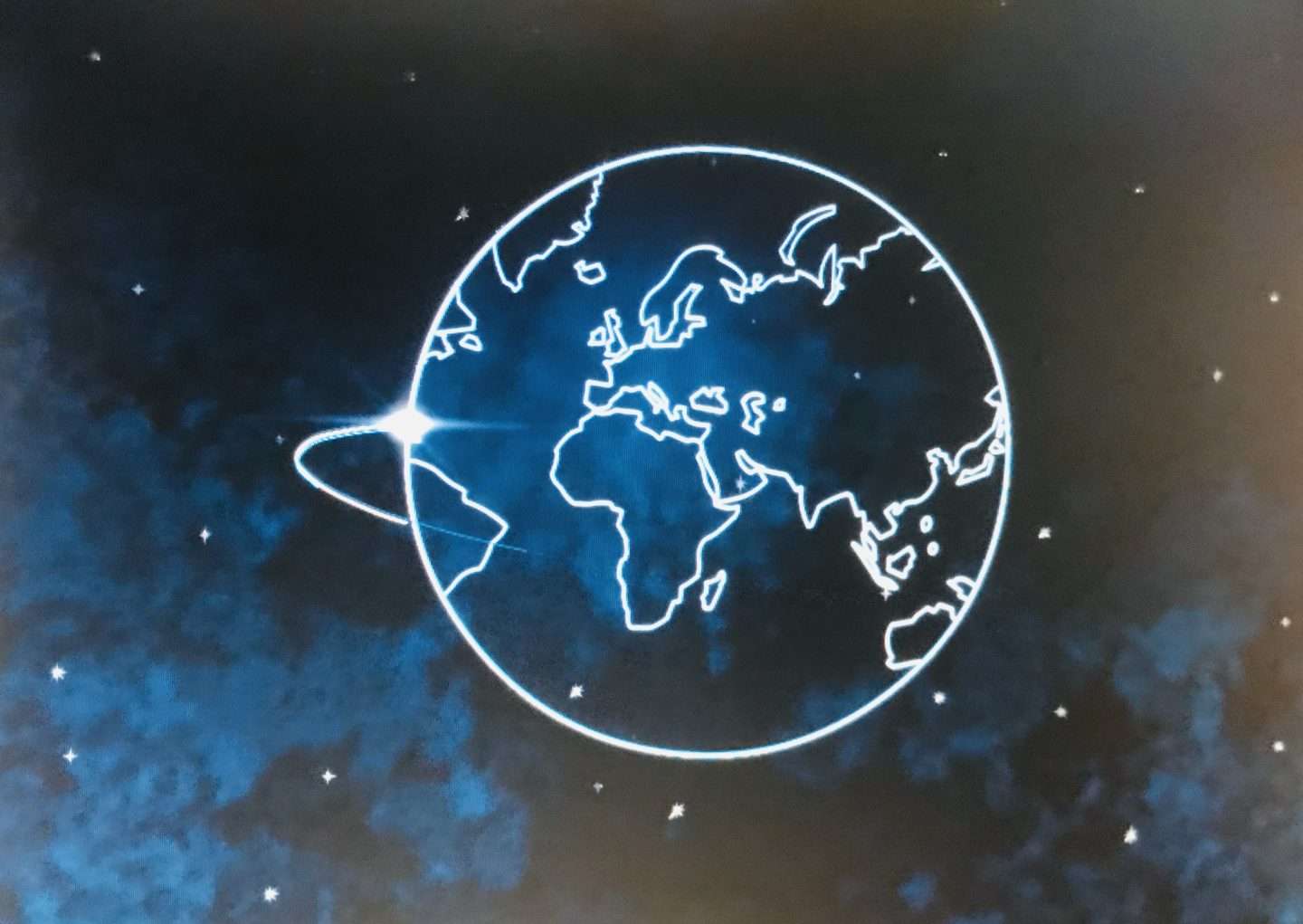 And we even made shirts honoring this ride! You can find our Spaceship Earth Epcot Collection in the shop. And even on Etsy!  We too are Fluent in Phoenecian. 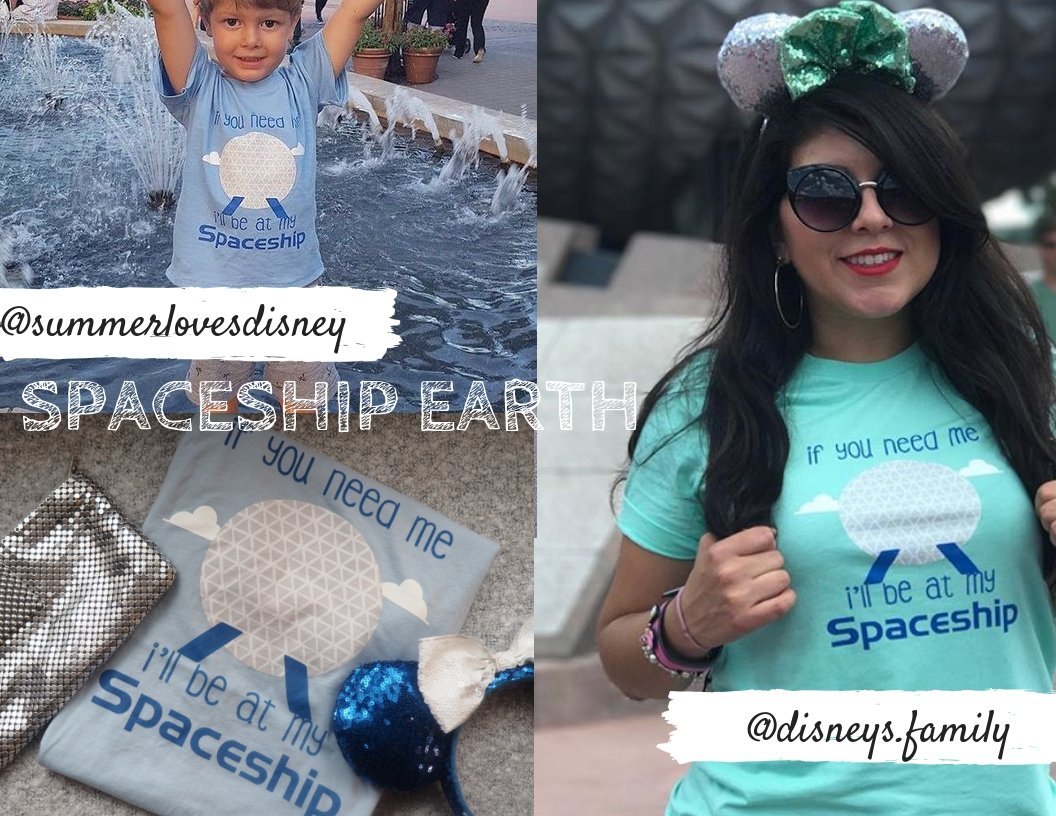 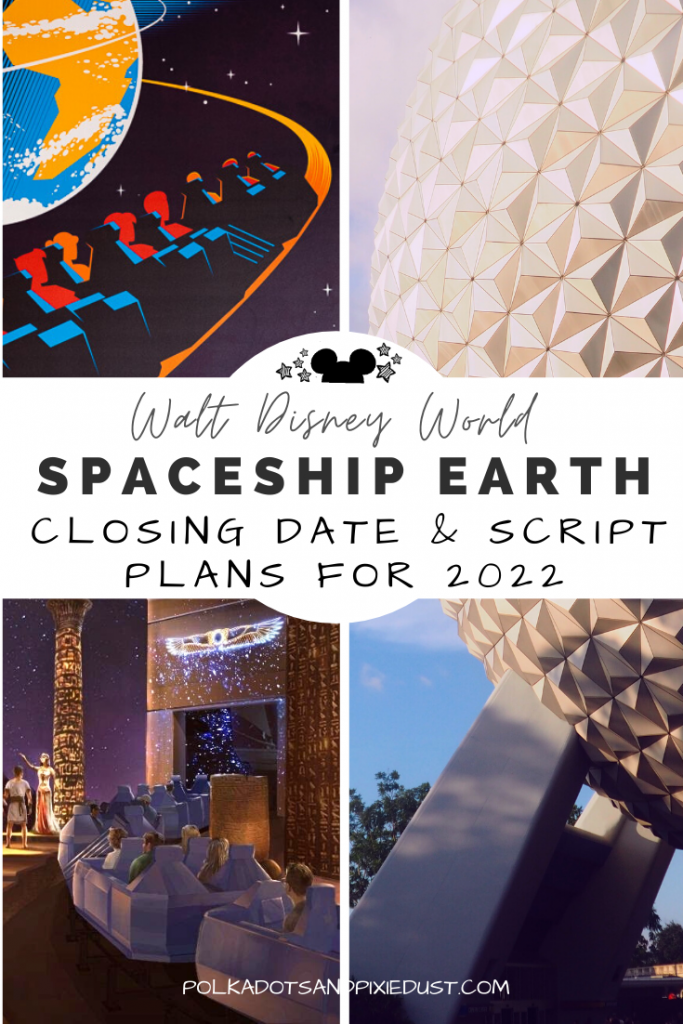