Walt Disney World Happily Ever After Ever Fireworks Dessert Party 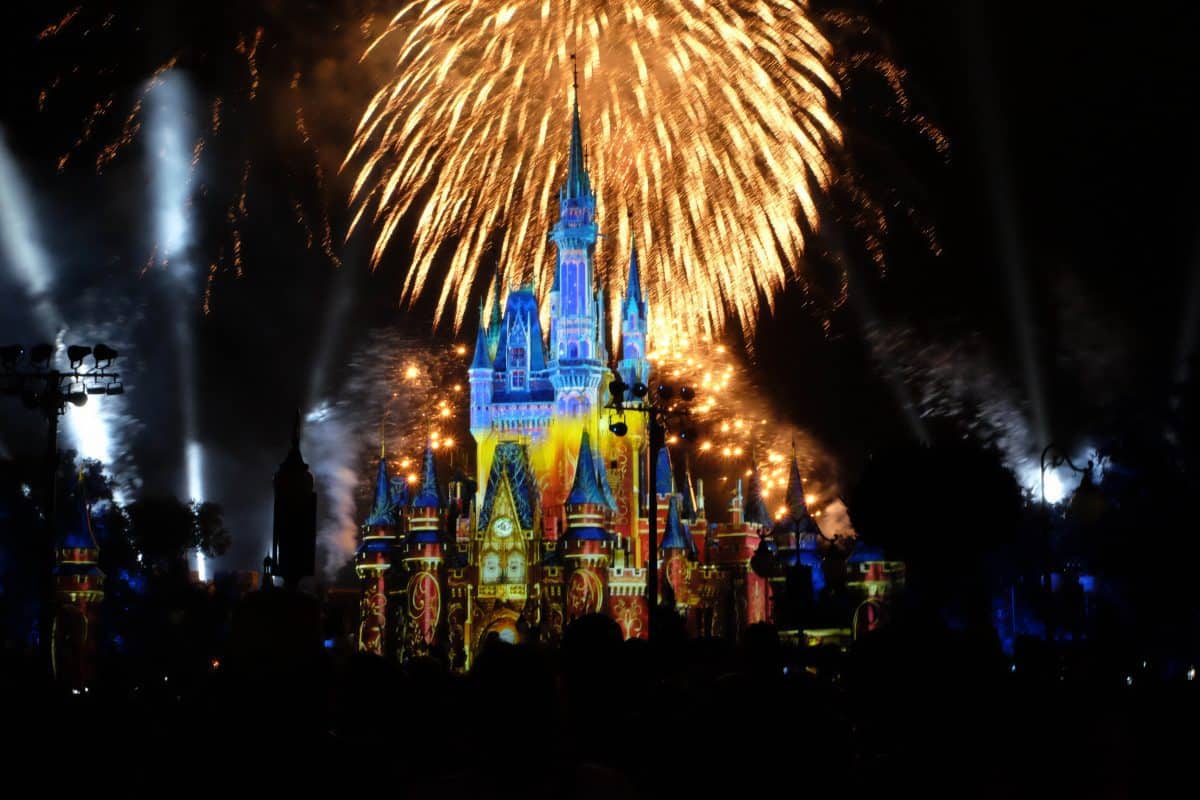 The Happily Ever After Fireworks Dessert Party is all about getting the best in the house at Magic Kingdom. The coveted hub grass with amazing views of the 360 fireworks show is blocked off particularly for Disney Dessert Party guests. So, with a selection of sweet and savory snacks, cider in fancy champagne glasses and your own viewing space, is it worth the cost?

The Happily Ever After Fireworks Show is ENDING September 29th, 2021

Before we dive into the Dessert Party lets give you a little history. Hopefully you’ve been to Disney in the past 13 years and had a chance to see Wishes. Of course in the days of YouTube you can also just google it to see how wonderful it was. If you were lucky enough to see Wishes you know that just hearing “When you wish upon a star” brings down the toughest of us. We can’t tell you how many people we saw on socials that confessed tears for Wishes and tears for Happily Ever After! So even if you’re holding a little grudge about the loss of Wishes, know that when your grieving is over, you can come to Disney and have a new show waiting to win your heart. Happliy Ever After debuted in 2017, took more than a year to create and design and was well worth the wait. 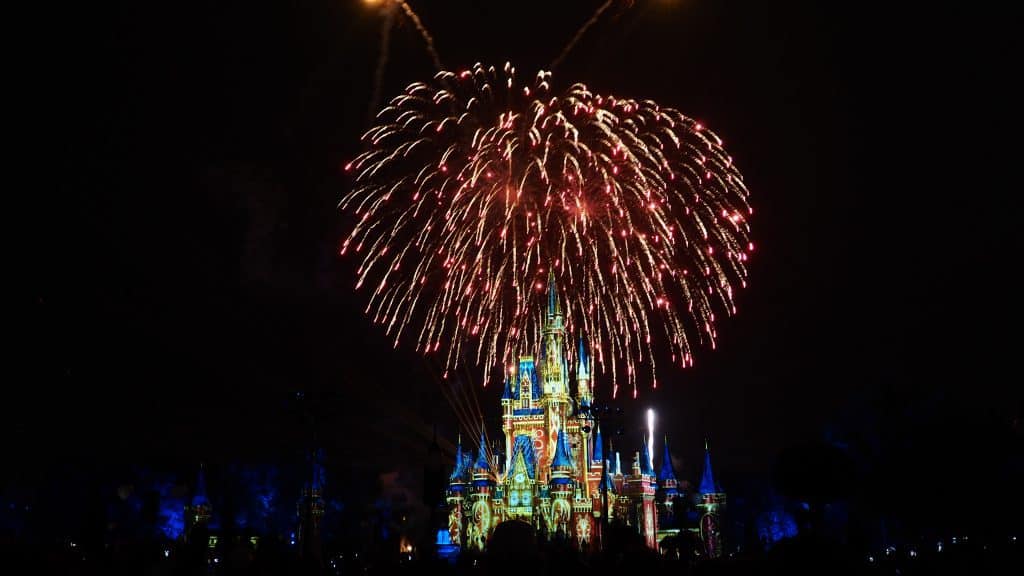 Why the Happily Ever After Fireworks Show is Amazing

While we are sad that Wishes is no longer running we are thrilled to have this new show full of little things that will be new every time we see it. The genius Walt Disney World Imagineer designers behind this show weave in songs and images from over 25 films and some of them less familiar to kids these days ( Hunchback of Notre Dame, Ratatouille, Hercules).

We were blown away by how intricate the details on the castle were. In fact we recently learned that some of the original illustrators of the films were called on to create new scenes for this show. Which means some of the artwork you see on that castle is brand new! And Authentic Disney! 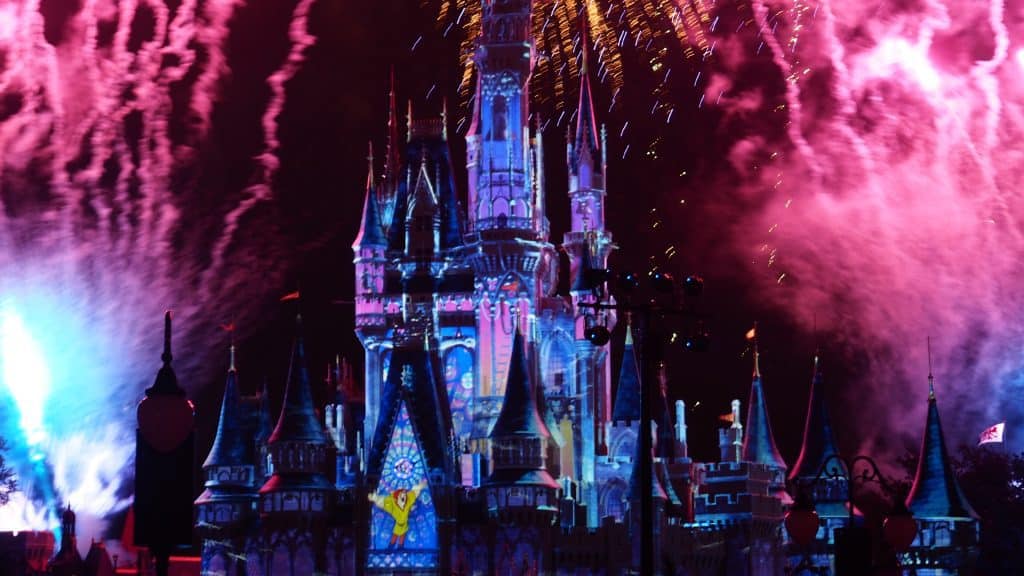 You will see something new every time you watch this show! There are so many characters, so many details, so many hidden little things. The Aladdin portion with the snake is all new art. Watch for Ratatouille hidden in the archway of the castle. See the Hunchback climb the castle and appear in the top window. See the balcony of the castle turn into a mouth during the Jungle Book Scene to sing “that’s what friends are for”. Watch for the fireworks shaped like blocks during the Toy Story Sequence or the swirls in the sky during the Moana portion.

Tinker Bell is still included in the show! She lights up, she flies and is still as magical as ever.

The message is just as strong as Wishes. In the Happily Ever After show the narrator shares that your happily ever after is entirely up to you. In Wishes a similar message shared that everything starts with a wish, but it’s your job to make your dream come true. 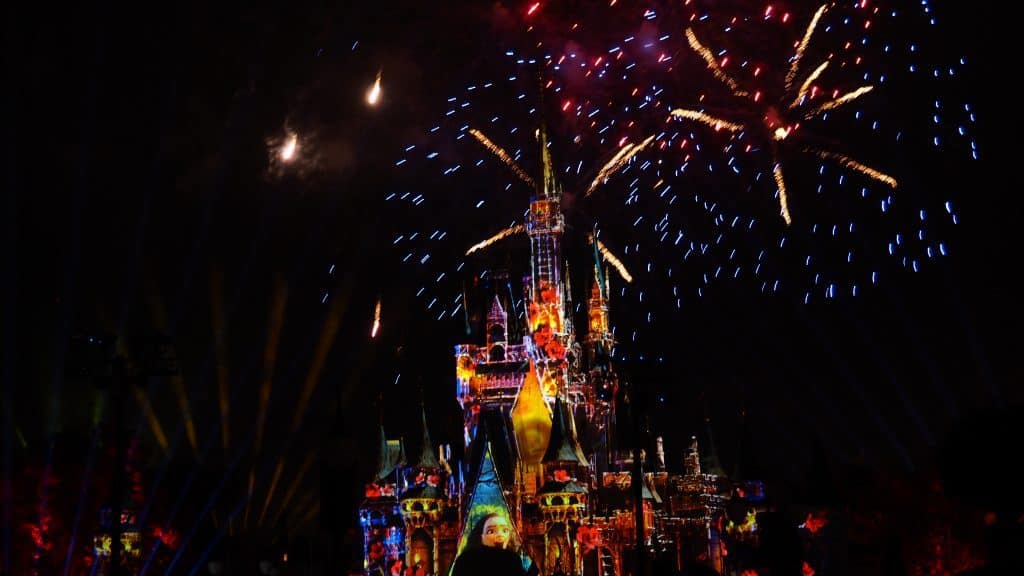 This is where the Happily Ever Dessert Party comes in. Ok, we’re gonna be honest here, we had a super tough time getting a glimpse of this show the first night we attempted it! And we’re sure almost everyone felt this way. We waited in our ” spot” on Main Street for over an hour only to have our viewing plans thwarted by a guy hoisting a girl up on his shoulders, a rogue flower planter and extremely tall people holding ipads. *Sigh*

That said, if you have not sprung for the Dessert Party where you get the coveted Hub Grass, aka the Plaza Garden, then get as close to the castle as you can and arrive crazy early. This show is definitely worth the effort. We arrived an hour and half before showtime and that still wasn’t early enough. People that had claimed spots for the Move It, Shake It, Celebrate It Parade around 5:30pm, simply didn’t move for the next 2.5 hours in order to be in the best spot for showtime at 9pm. While we wouldn’t think this is the best way to spend your time at Disney, it was clear these people knew something we didn’t.

Is the Happily Ever After Fireworks Dessert Party Worth the Cost?

Tickets for this Disney Dessert Party are around 30 bucks a person to eat an unlimited dessert buffet and claim your viewing spot. You will have to pay more if you hope to stay in the Tomorrowland Terrace to view the show instead of viewing it from the lawn. At least, this was the pricing structure when we visited. 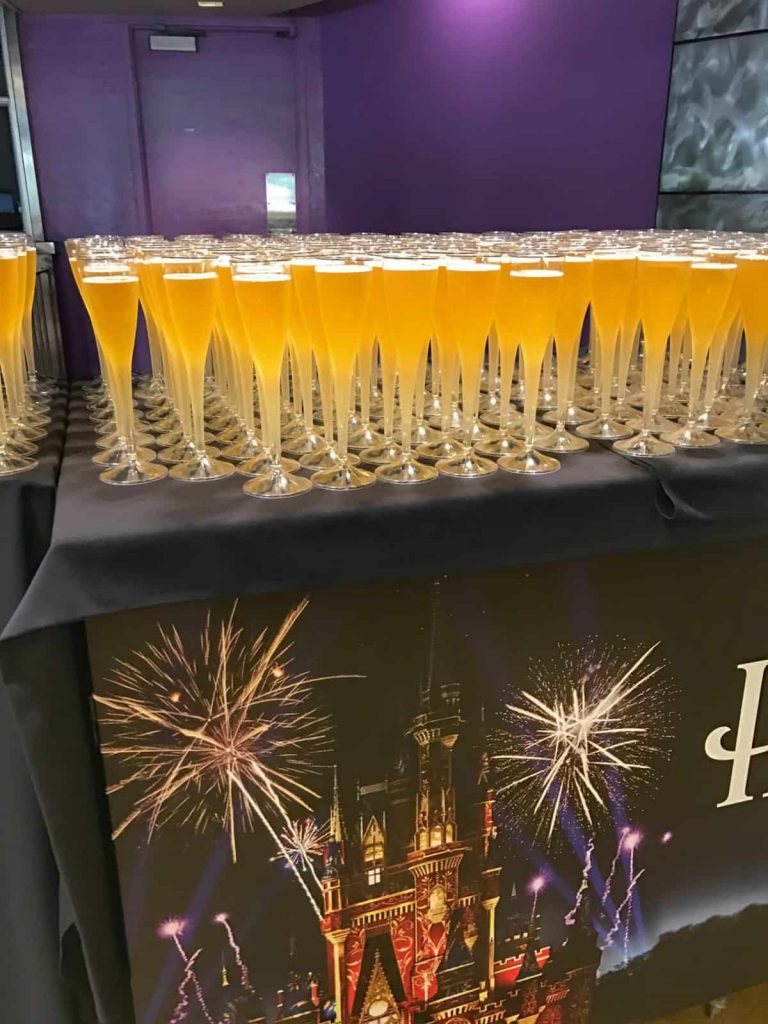 Happily Ever After Party Desserts & Drinks

Sparkling Apple Cider in cute champagne flutes makes you feel like a princess! You can also grab water, coffee and tea which you will need to help wash down all those desserts. And for those of you hoping to get a little healthy here you’ll find cubed fruit and cheese, with an array of crackers to choose from. If you hope to just dive right in to the dessert portion of your evening know that there are a few stations to check out. 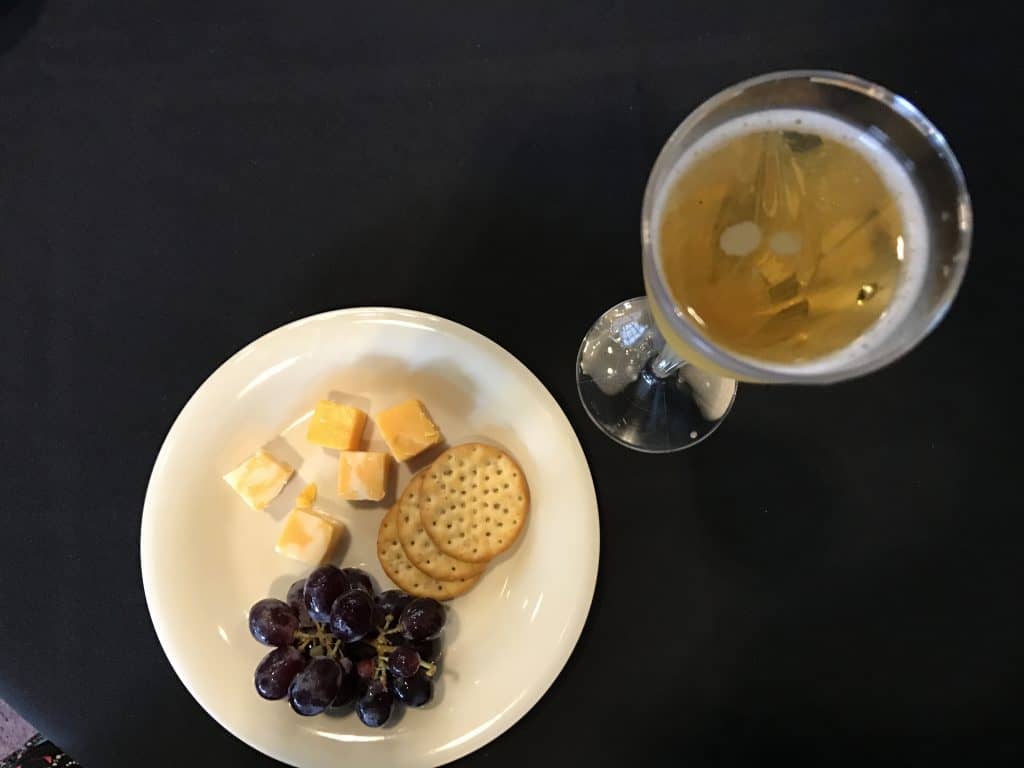 If you have kids you can get a kid-friendly plate with a cute little chocolate pudding and a couple treats all on one plate. We saw these at the Ice Cream Sundae station. Yes, they have ice cream, and both kids and adults are welcome here. So get in line and decide what toppings you want.

The pastries they had were amazing. A small strawberry tart, villain cupcakes, chocolate covered strawberries. A s’more graham cracker square… so many choices!

And therein lies the problem! 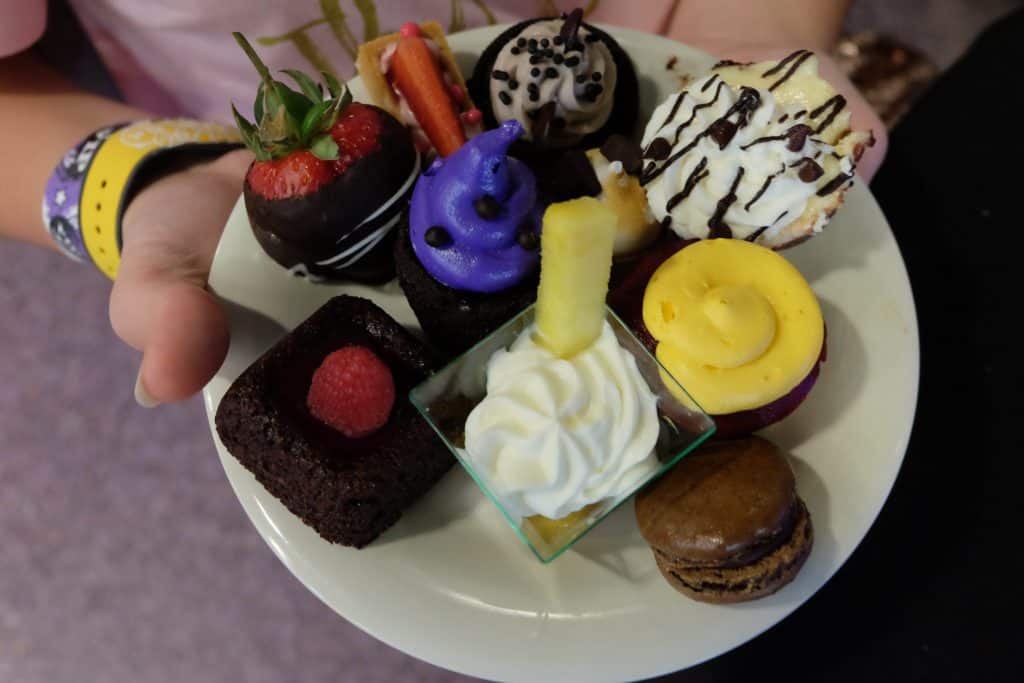 Truthfully, I don’t think any of us ate the 30 dollars worth of desserts. I could hardly even finish one little plate. Everything was rich and tasty and totally amazing, and if I hadn’t eaten anything else that day I may have been able to go get the ice cream, or other desserts I didn’t try.

So, if you’re hoping to get your money’s worth here- never fear, you will, but whether or not you’ll be able to eat it all is up to you.

For us since the price included that coveted spot on the hub grass with fewer people and a better view of the castle, it was worth it!  We would not have been guaranteed the amazing views without paying for the dessert party ( or sacrificing Disney hours by showing up hours earlier to claim our spot). 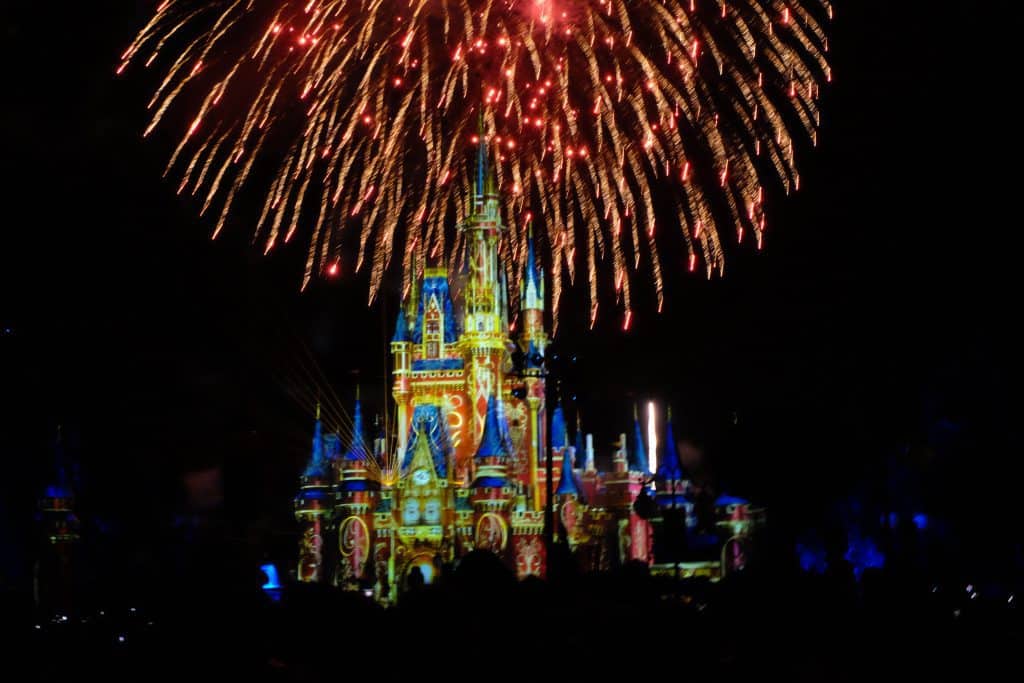 If you’re up for a preview we like this video from Inside the Magic. Of course this show is better in person, but this will inspire you to take that next Disney trip sooner rather than later. We’ve also pulled together all the Happily Ever After Lyrics for you to memorize. Because nothing is more than fun than knowing every song.

Be sure to let us know how much you loved it! TTFN 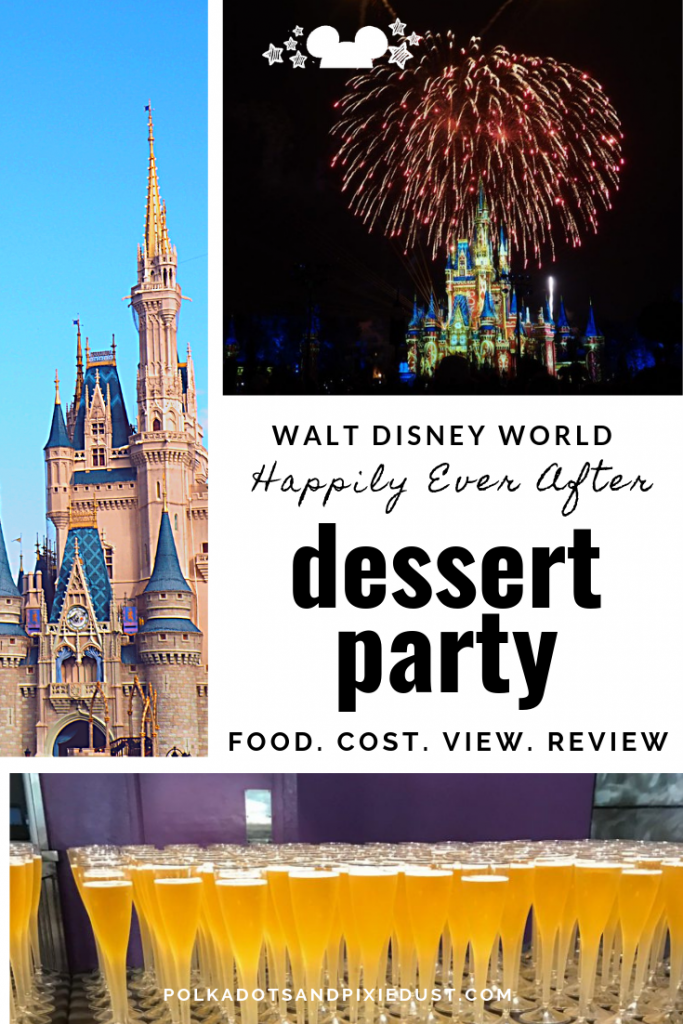