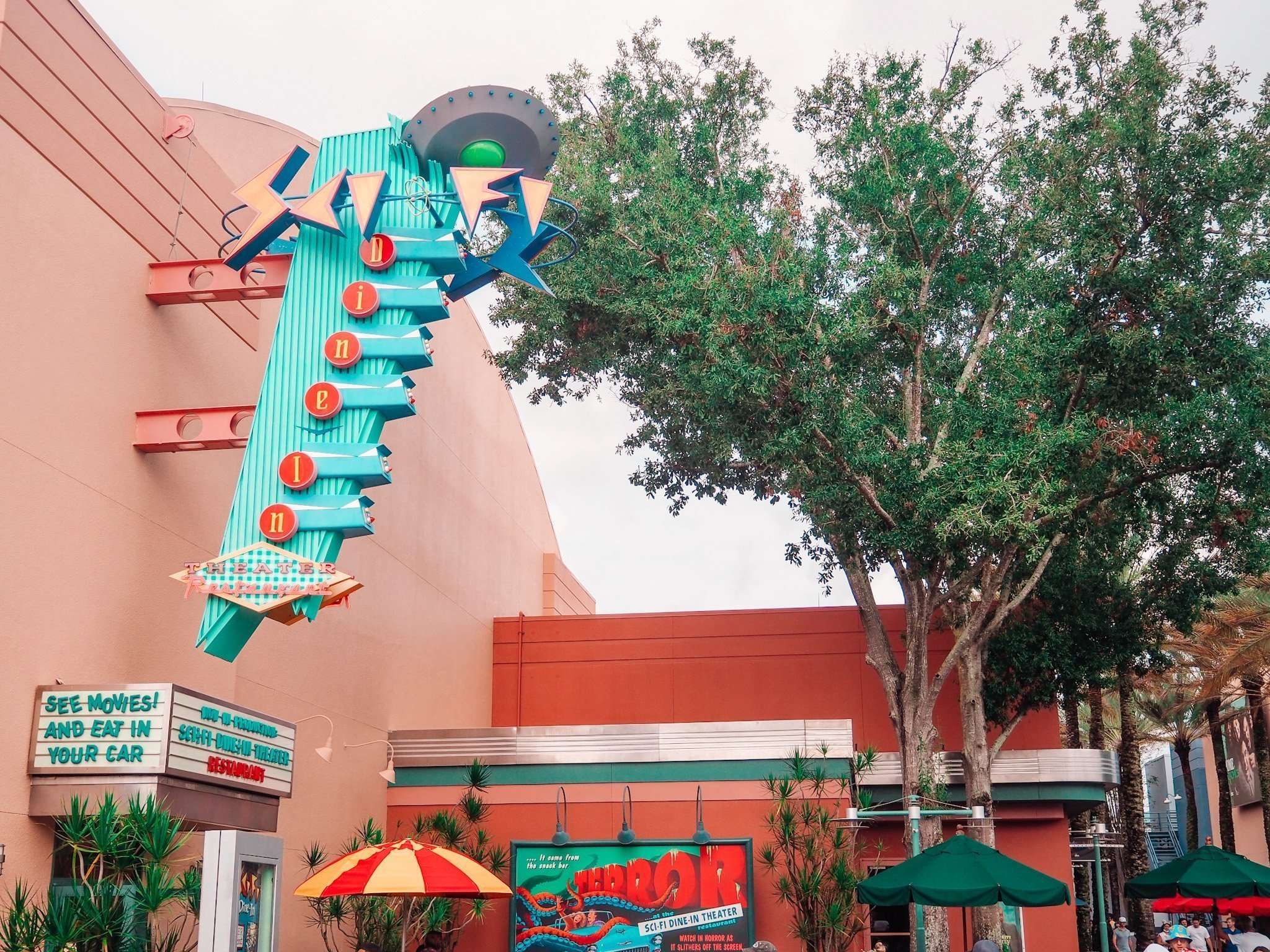 Hollywood Studios has slowly been getting back into the good restaurants game. With the arrival of the new menu at The Hollywood Brown Derby, and new plant-based Ronto wraps over in Galaxy’s Edge, we were quite sure it was a sign of a Disney foodie revolution. Heck, even ABC Commissary had upped its game with seasonal treats. And with a few new things on the menu at Sci-Fi Dine-In we thought it was about time to give Sci-Fi Dine-In theater a try ( again). See, we had been to Sci-Fi Dine-In theater a few times before to see what the hype was all about. But mostly, we wondered if they were ever going to change out that sci-fi movie reel. We were also excited for milkshakes, of which they had several. But what about the actual food? Were the burgers worth the higher price tag? Was this a good restaurant for kids? We had questions, so we decided to add the Sci-Fi Dine-In Theater Restaurant to our Disney Dining Reservation lineup. Here’s what we think you should know before you go. 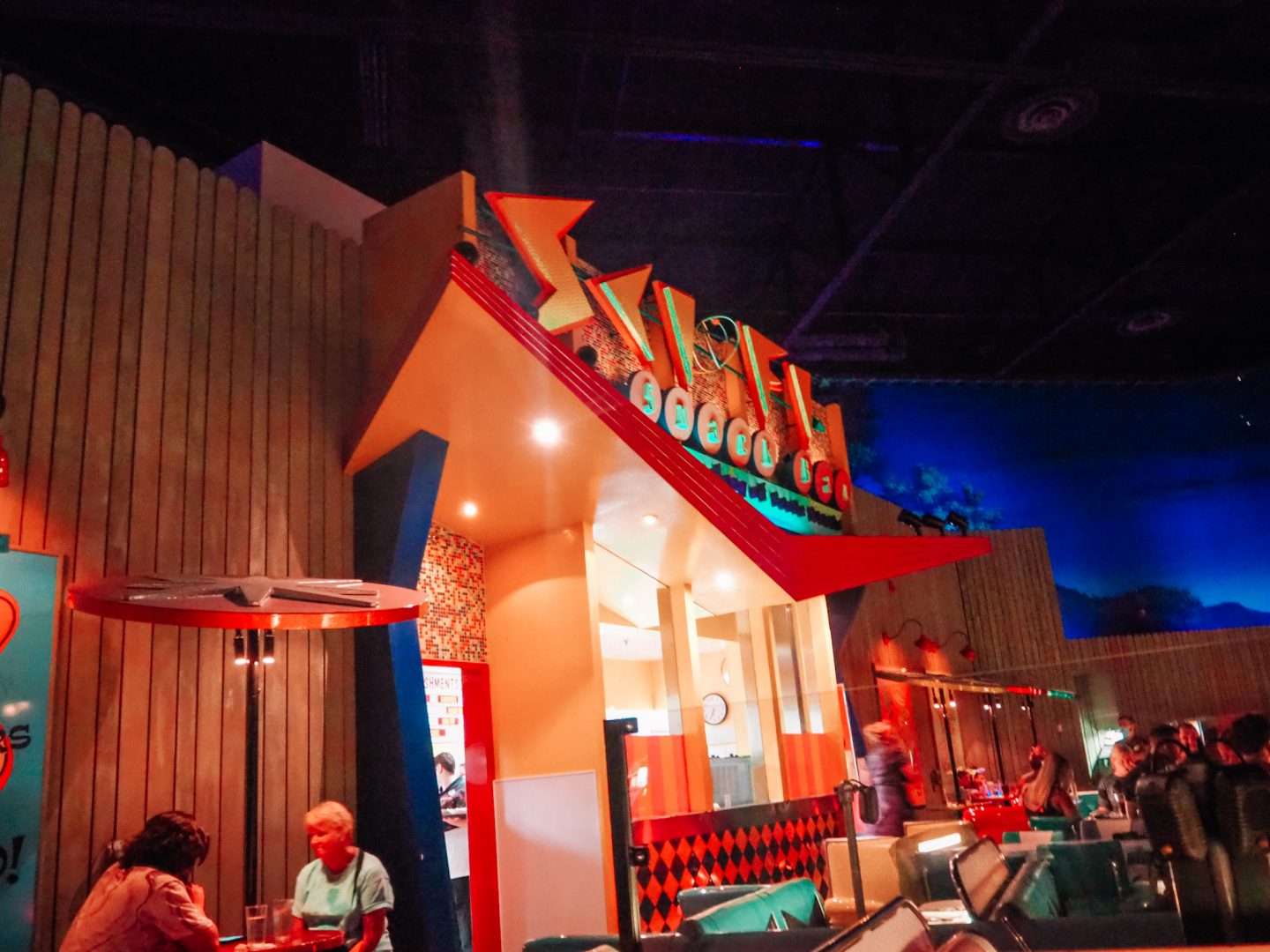 Before we dive in, let’s share a quick disclaimer. Sci-Fi Dine-In has a following. Like a huge following. If you’ve seen the thousands of reviews online for Sci-Fi Dine-In you know that it’s a drive-in set up with a classic theme, offering burgers, fries, and milkshakes. And people love that. For us, this Disney Restaurant Review is less of an emotional post and more of a practical one. If you’re ready for a little honesty here, read on. 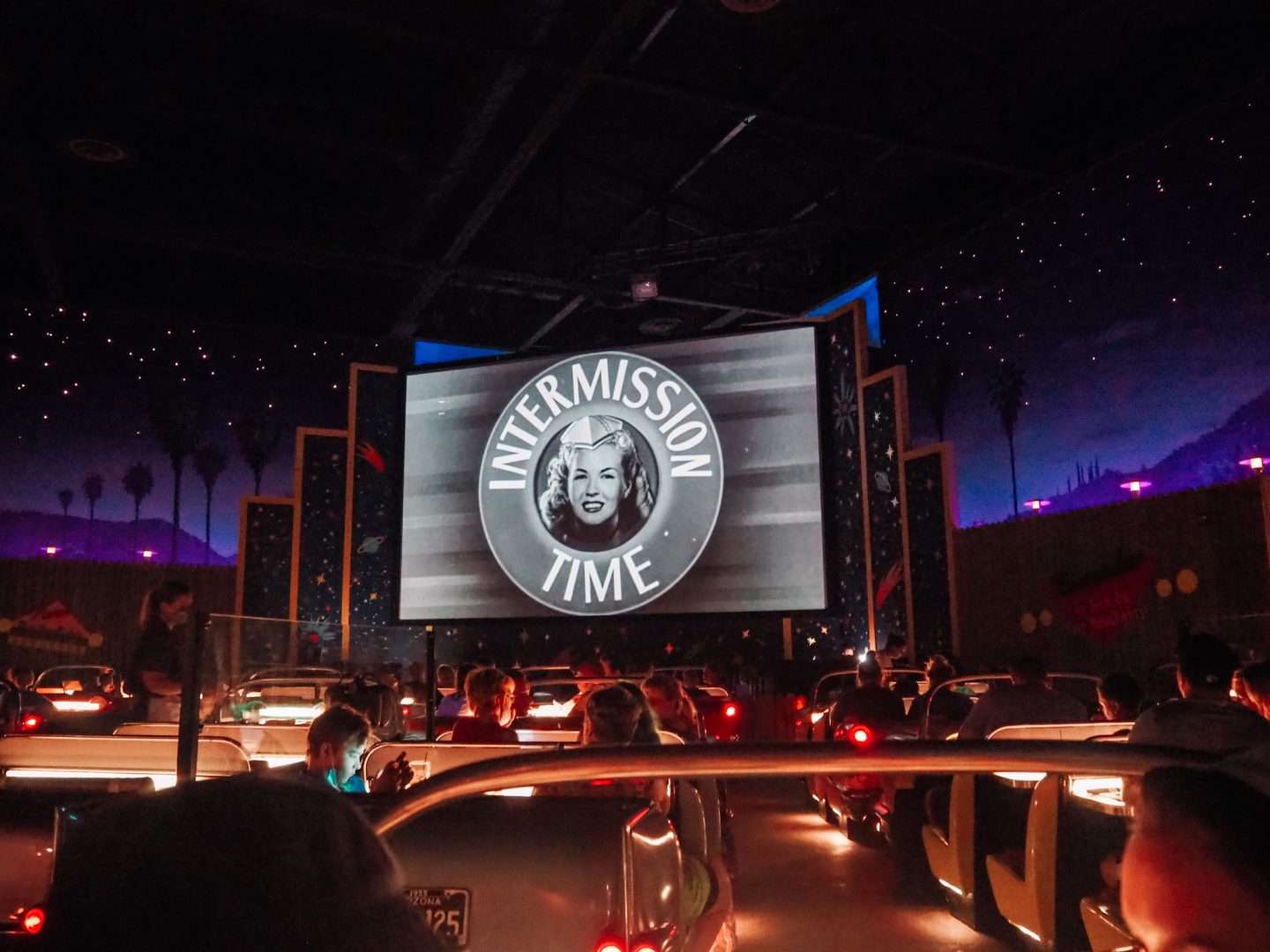 You’re Together, but Not Really

The Sci-Fi Dine-In is a restaurant set up like a drive-in movie theater. With each family set up to be seated in a 6-seat car. So, with two people per row, your family will be sitting 2 people a seat in front of each other. Since the experience is meant to be a family watching a movie while they eat, the car setup doesn’t allow for a true family meal, as there isn’t the opportunity to have a conversation since family members aren’t facing each other. This could prove cumbersome for families with children who may need to cut up a child’s meal or attend to multiple children dining with them.

If you’re grown-ups, however, who have had more than enough of each other on this Disney Vacation then Sci-Fi Dine-In Theater may just give you the distance, and excuse you need to not talk to each other.

It’s Pretty Dark Up in Here

We love a good ambiance. And we’ll take a dark evening filled with noir anytime. But when it comes to eating, we tend to like to see our food. Again, we’ve been to Sci-Fi Dine before, this wasn’t a new experience for us. We consistently can’t see the food we eat here, mainly because the lighting bar that illuminates your car table just isn’t that bright, or big. If not for the brilliance of iPhone cameras we wouldn’t really have gotten great pictures here. Because even our regular cameras would have needed a fixed lens, with a low f-stop and probably a tripod. 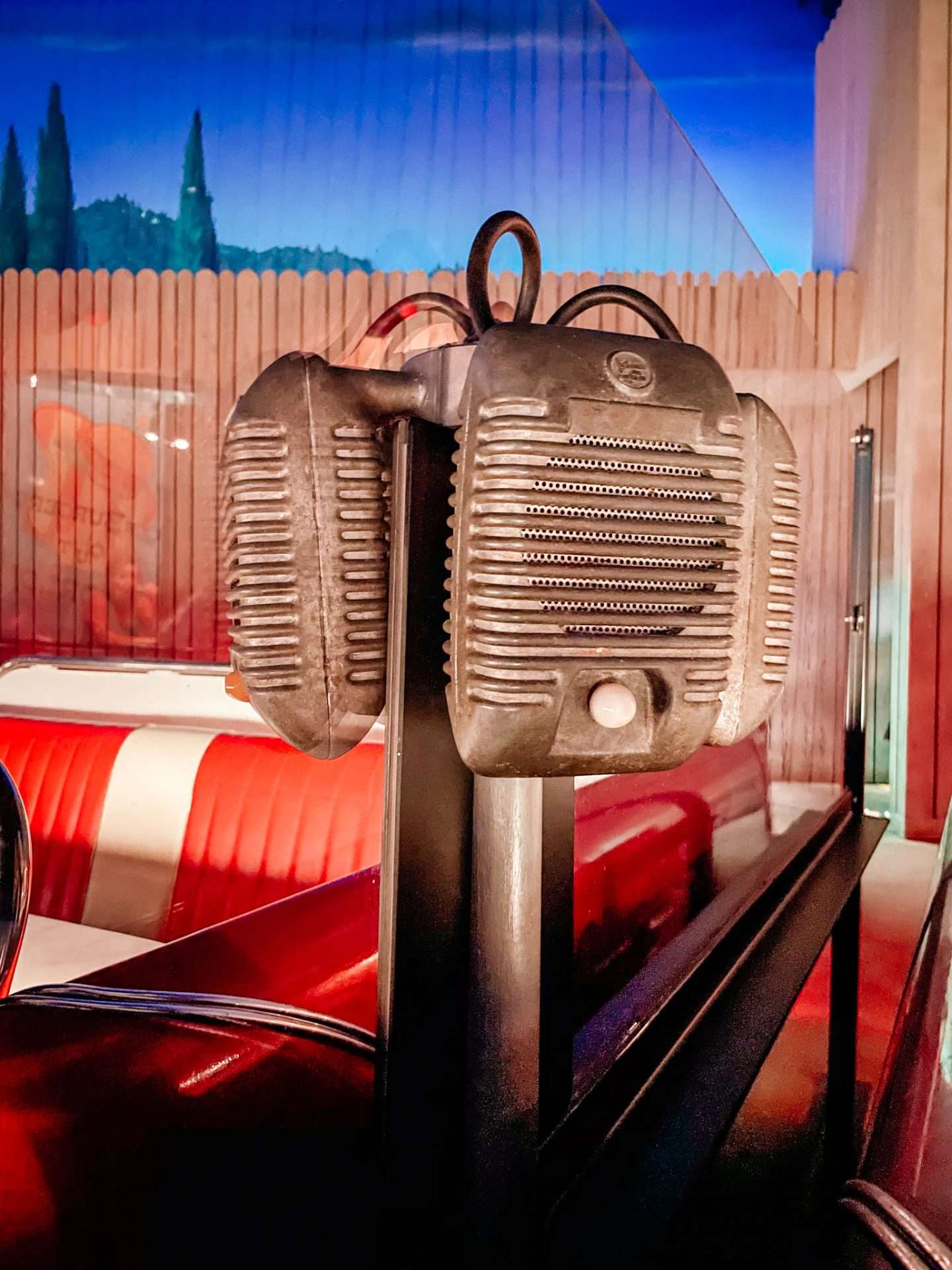 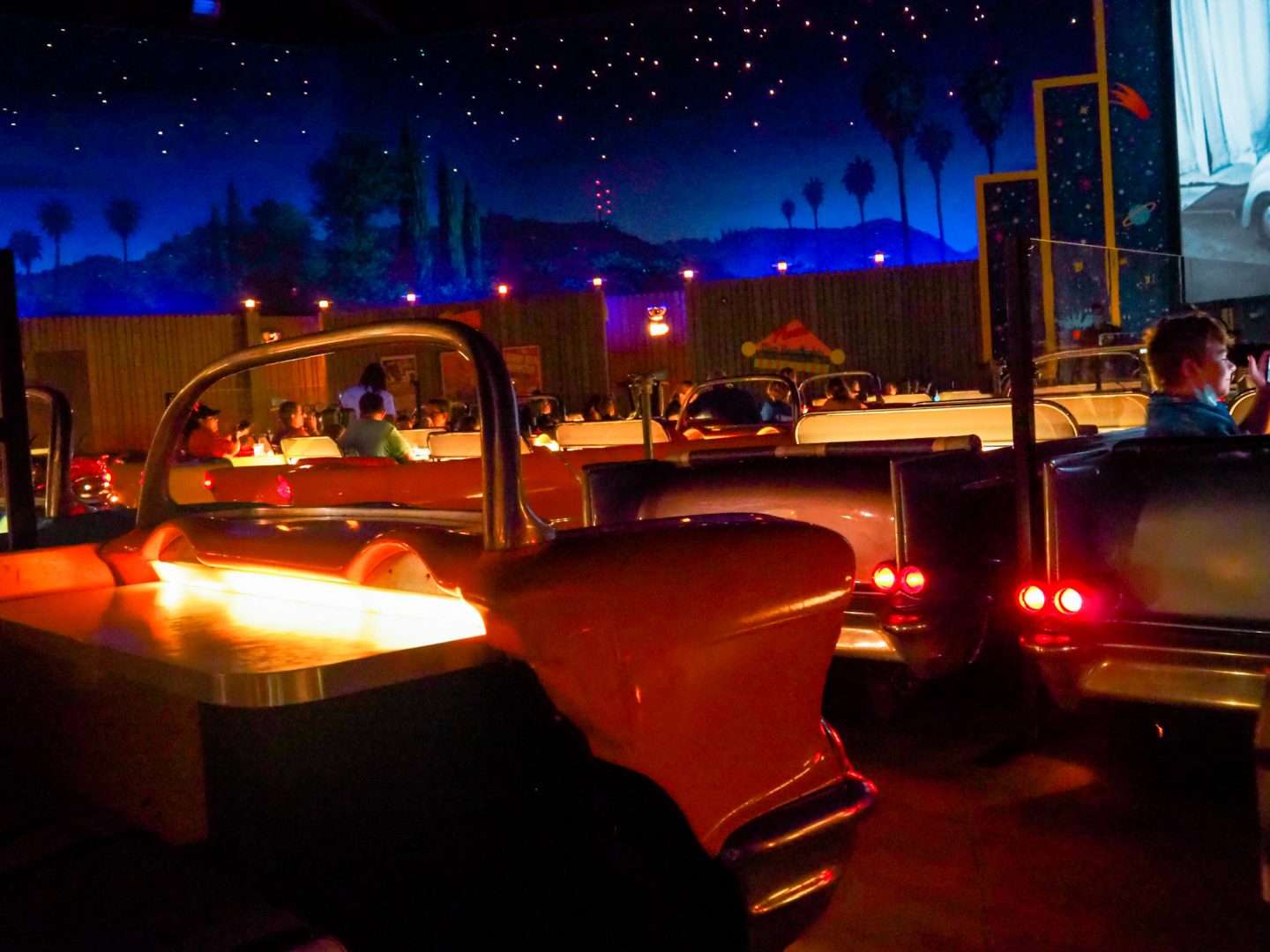 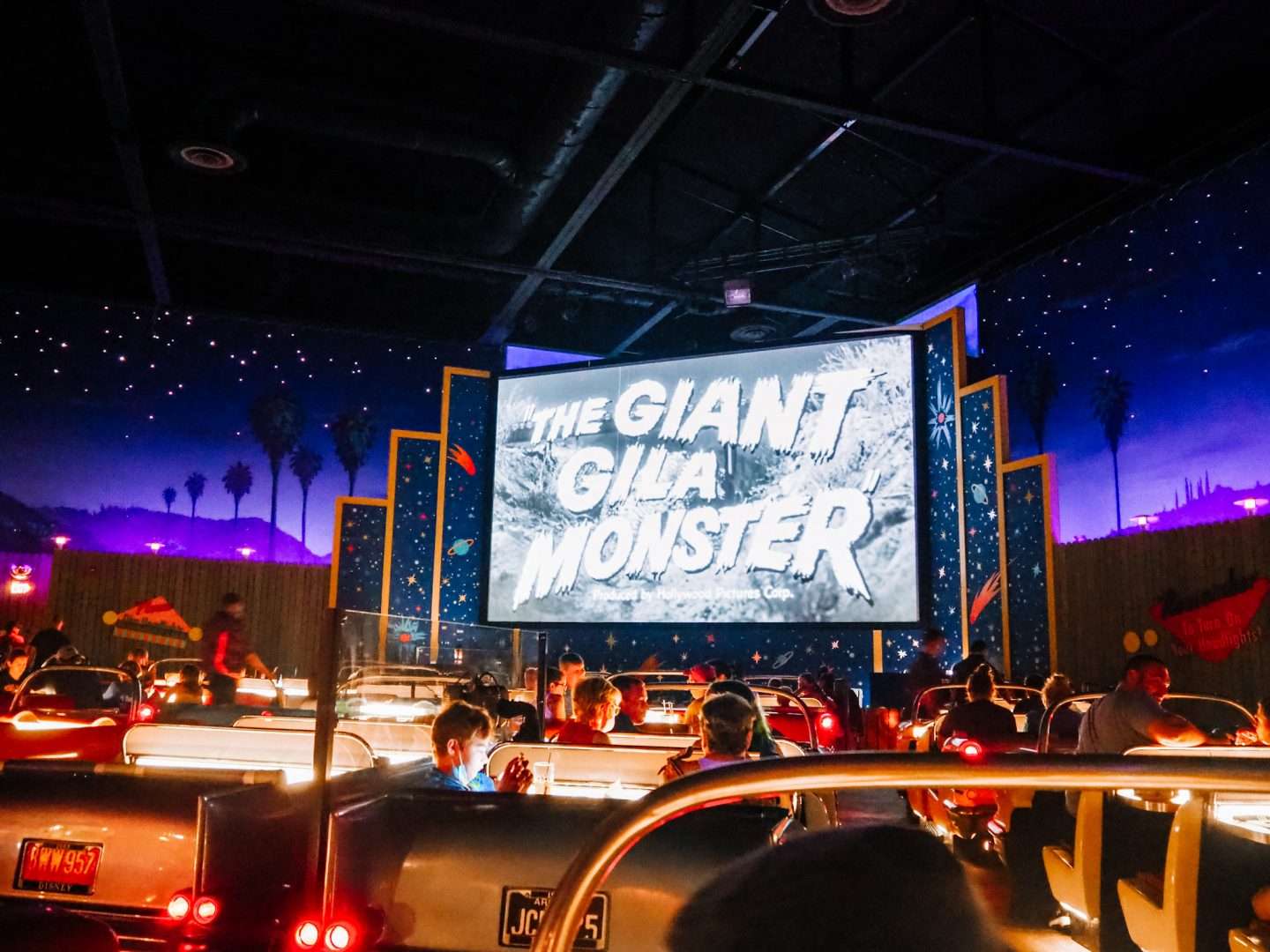 What Movies are played at Disney’s Sci-Fi Dine Theater Restaurant?

While this restaurant does offer the experience of a drive-in, you don’t see Disney cartoons or clips from classic live-action films like Disney’s The Cat from Outer Space. Instead, movie clips from the ‘50’s and ’60’s are shown intermittently between old-school ads and newsreels of the olden days. In fact, almost the entire reel of clips and commercials is in black and white. While this lends to the nostalgia of the day, children will question what they’re watching. In that same vein, the reel selections chosen are often of the most obscure Old Hollywood Sci-Fi films. Often scary, these film previews, clips, and even advertisements will be completely lost on many children, if not adults. Clearly meant to bring you back to the days of aliens and flying saucers, this drive-in is more appropriate for the older crowd and would work better at Universal Studios than Walt Disney World.

Check out exactly what you’ll be watching on the big screen in this Sci-Fi Dine-In Theater Restaurant Video Loop at Hollywood Studios.

As a family dining experience, while the concept is interesting, the atmosphere here offers little for Disney families. A basic burger, fries, and milkshake menu is appealing. But, the awkwardness of sitting behind each other in a car while eating and lack of Disney integration into the films seen on-screen leaves little to appreciate here. Not having small children we’re still painfully aware that little kids can hardly see over the car seats, window, or understand what’s happening on screen. 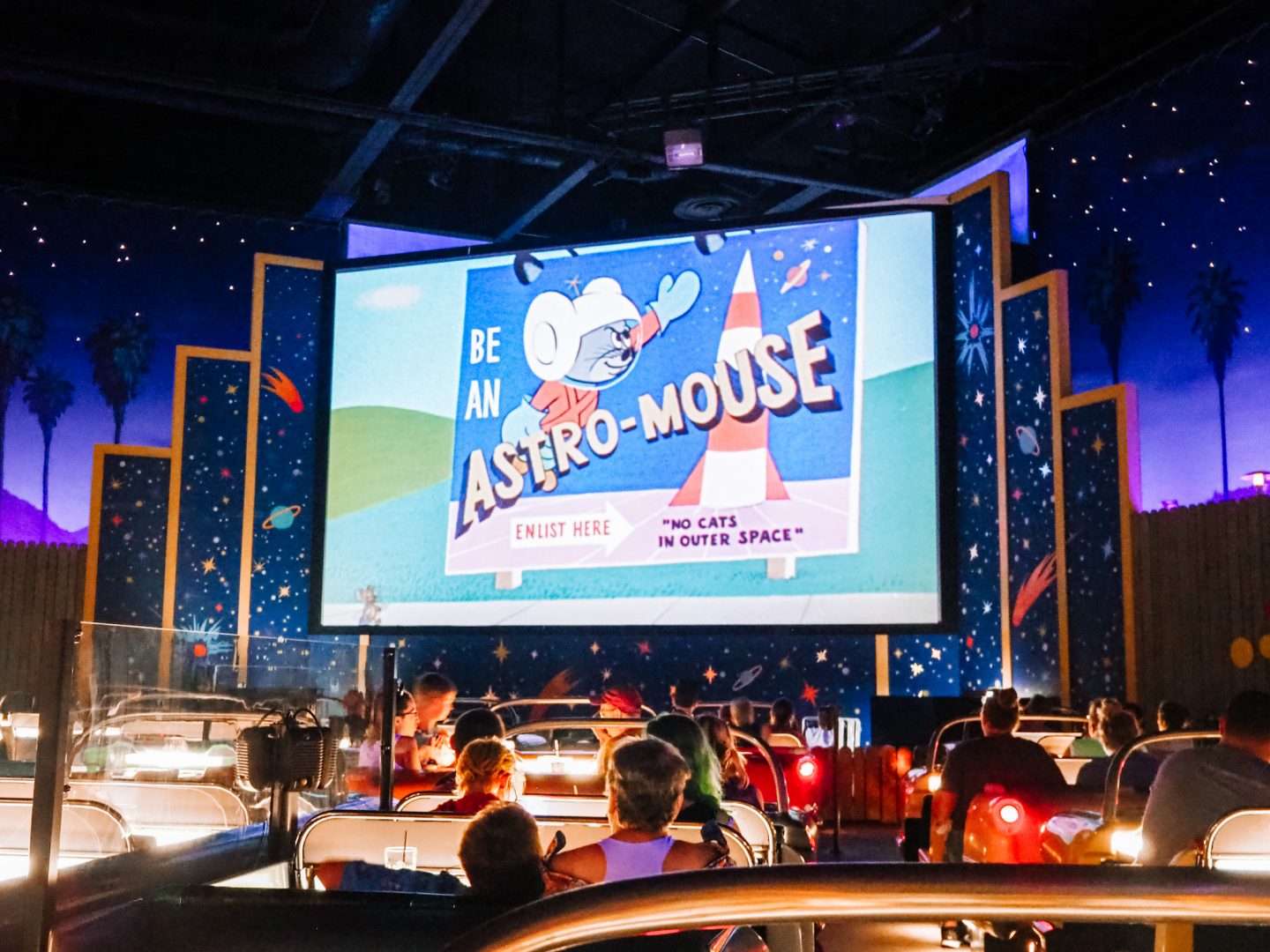 To be honest, the Milkshakes at Sci-Fi Dine-In are the main reason we gave this restaurant a second ( or third) chance. Only to find their milkshake menu now quite limited. The burgers and fries are good, but nothing to write home about and could be on par with the quick service restaurant, Backlot Express nearby. An alternative option to a burger is the turkey sandwich on a croissant. Even this dinner item is simply deli meat on a croissant served cold and can easily be found at other restaurants for less than the 17 dollars we paid for it here. D-Luxe Burger over at Disney Springs has a better burger menu, milkshakes, is cheaper, and offers a better experience. The addition of the plant-based burger at Sci-Fi, however, is a great option for vegetarians and vegans. And hopefully, a sign that they are trying something new. Check out the whole Sci-fi Dine-In Theater Menu.

This sandwich is a house-brined Herb-roasted Turkey served on a Fresh-baked Multigrain Croissant with Bacon, Lettuce, Vine-ripened Marinated Tomatoes, and Cilantro-Avocado Aïoli. This sandwich was a bit disappointing since it’s simply a thin-sliced deli-meat turkey, on a croissant served cold. 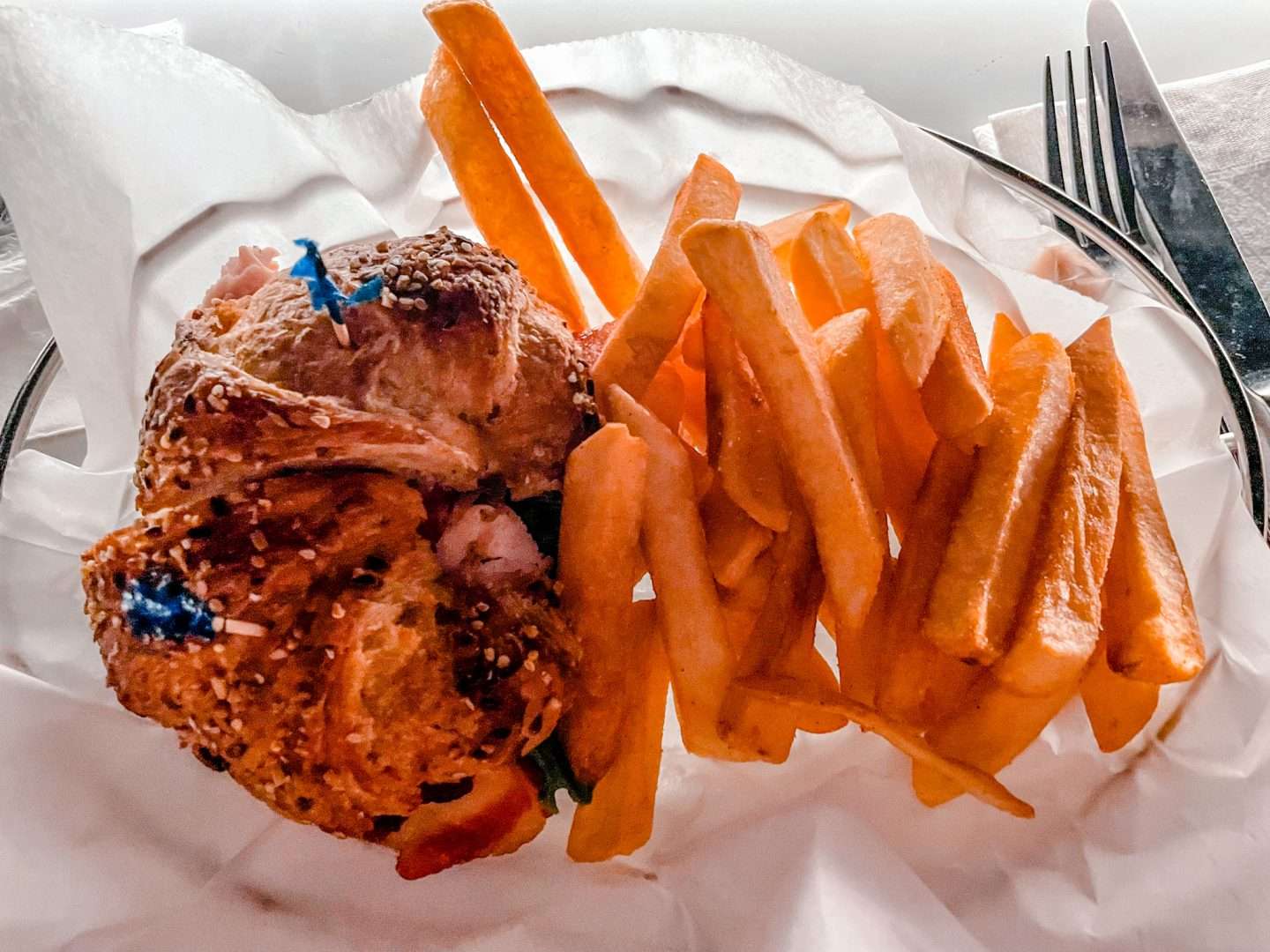 This Plant-Based Burger at Sci-Fi Dine was good. Featuring a Grilled Plant-based Burger, Grilled Portobello Mushroom, “Cashew-Mozzarella”, Garlic-Tomato “Aïoli”, Nut-free Pesto, Lettuce, and Tomato. This sandwich was nice, the addition of the portobello mushroom always tends to make the bun a little soggy, but other than that, this was a nice offering for plant-based diners. 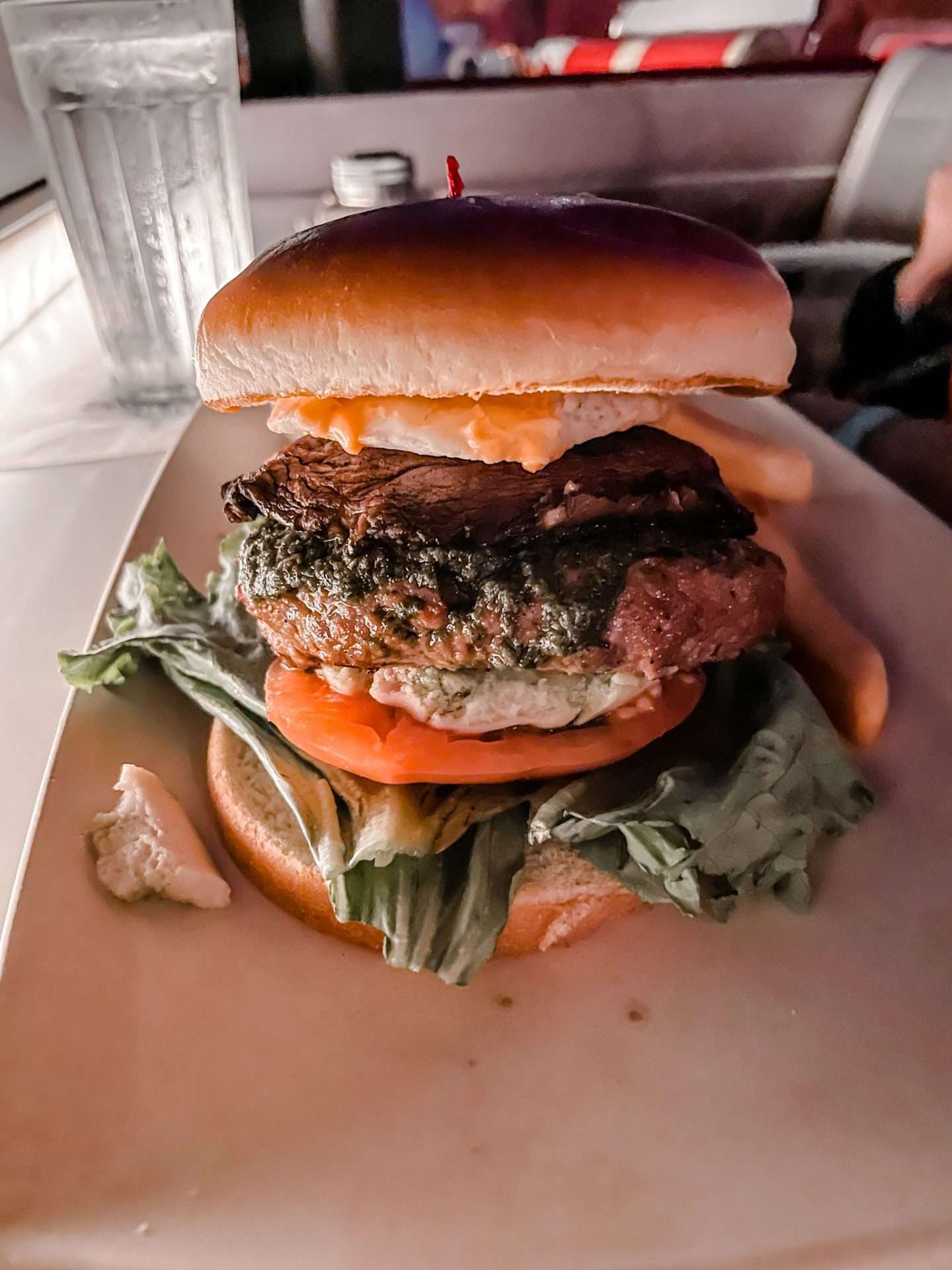 The seasonal “specialty burger” at Sci-Fi is a pork-on-pork burger. This burger was a pork burger, with a slab of pork on top, topped with coleslaw. Since this is seasonal, you may encounter a completely different feature film burger on your next visit. This burger, however, was good and worth the try if you love pork. 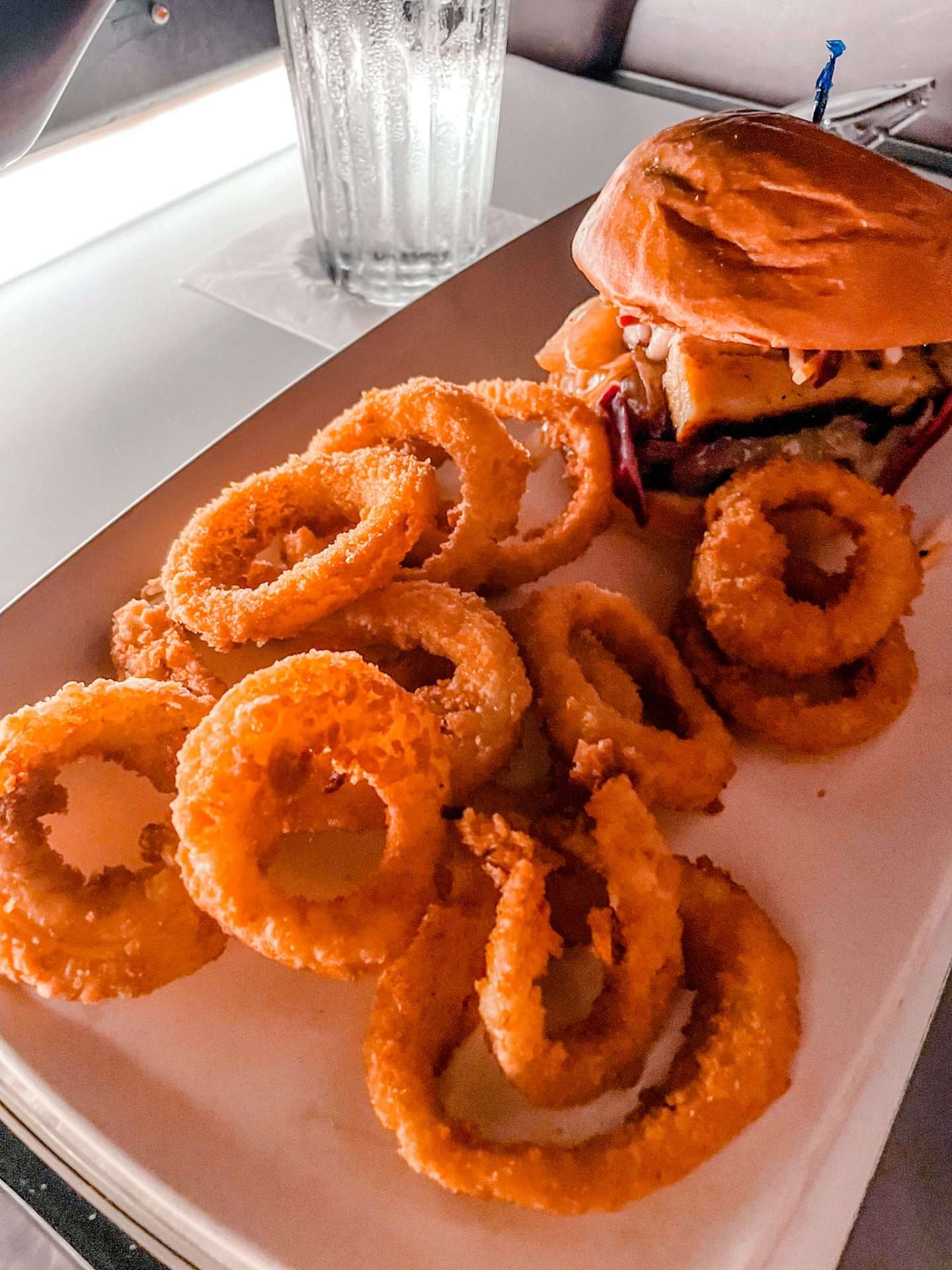 While the cost is primarily a result of the unique theme and dining experience offered here, the cost in general, seemed a little pricey to us. Mainly because we know we can get similar foods at a variety of quick-service restaurants at Hollywood Studios, for half the cost. Additionally, while we’re happy to pay extra for a gourmet milkshake, Beaches and Cream on Disney’s Boardwalk has a better selection at a cheaper cost. While the cost is by no means high here, it is for what you are ultimately getting. 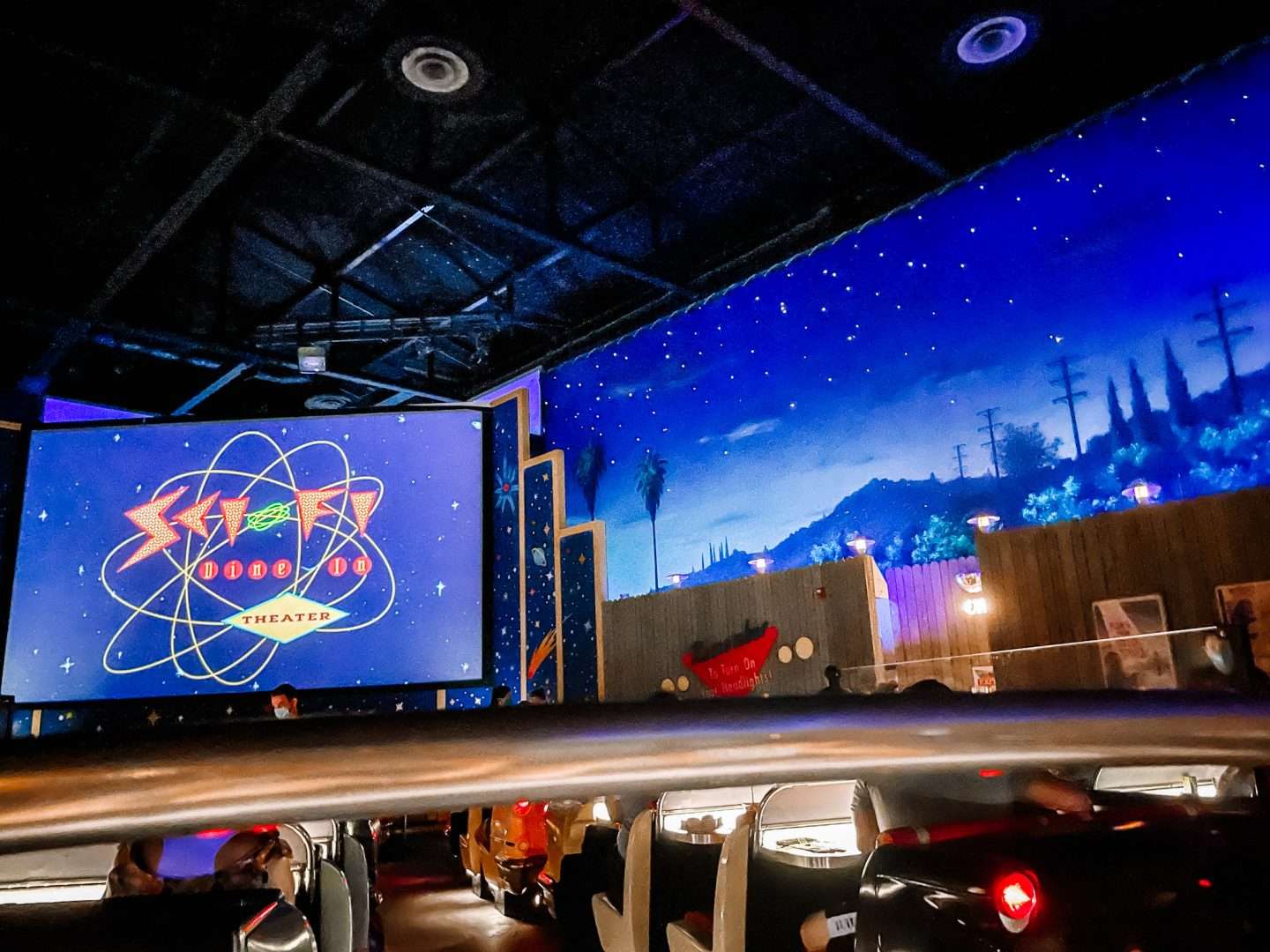 Sci-Fi Dine-In Theater Worth It?

Whether or not Sci-Fi Dine-in is worth it depends on why you’re visiting. If you’ve made reservations for a Sci-Fi Dine-In Drive-In experience, then this restaurant will be worth it for you. If you were hoping for a family dining experience that includes an element of Disney, then you will be disappointed. We would not recommend Sci-Fi Dine-In Theater Restaurant to families with children, simply because it’s difficult to navigate the car seat table set up, the overall darkness of the restaurant, and children will be disappointed in the shows on-screen. 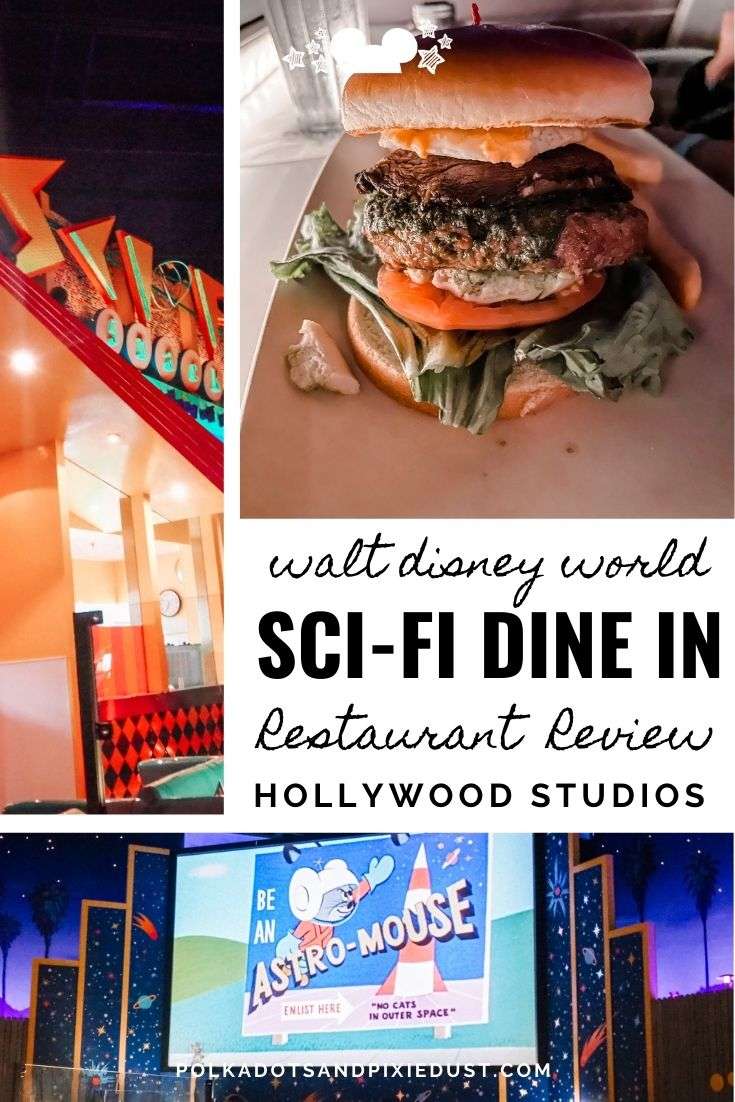 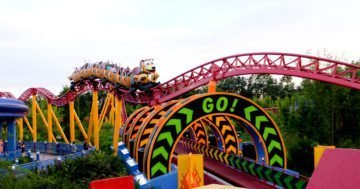 Hollywood Studios Top 10 Things to Do

Need to know the top 10 things to do at Hollywood Studios? With rising ticket prices at Walt Disney World, it’s a good idea to maximize your day in one park. That way you can skip the park hopper ticket! Here’s our list of Disney […] 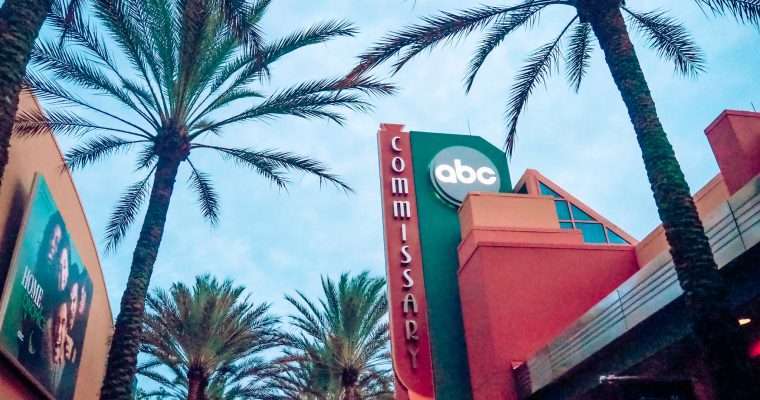 When it comes to Disney quick-serve restaurants, there is a gamut of options across Walt Disney World. From mediocre theme park food to unique flavorful meals, Hollywood Studios can provide them all. ABC Commissary can be found somewhere in between these two ends of the […]