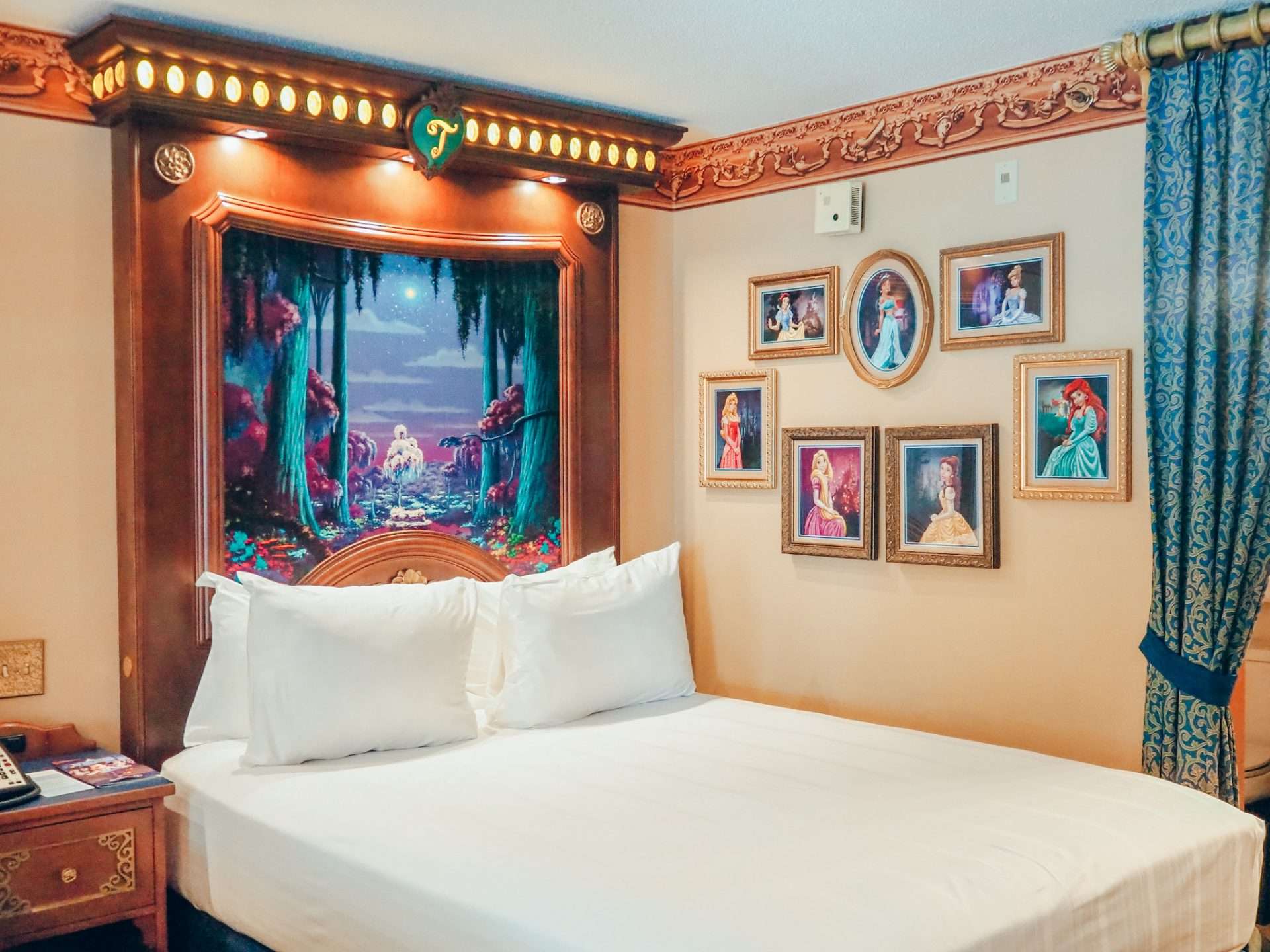 On our last stay at Walt Disney World, we opted for Port Orleans Riverside Resort for a number of reasons. The atmosphere promised calmer seclusion than we would find at the Value Resorts, and the price was nicer than the Boardwalk Resorts. And while we don’t love the limited transportation options here, we knew Disney Springs was a must-do for us this trip and loved the easy boat ride to and from the shopping center.

So, in order to make this trip a little extra, we chose to upgrade to the Royal Rooms at Port Orleans to see what all the fuss was about. After an extremely disappointing, and pricey experience at the Pirate Rooms of Caribbean Beach Resort, we wanted to see if the Port Orleans Riverside Royal Rooms were worth the cost. So, we booked a Royal Guest Room with a Woods View and walked in with our fingers crossed. 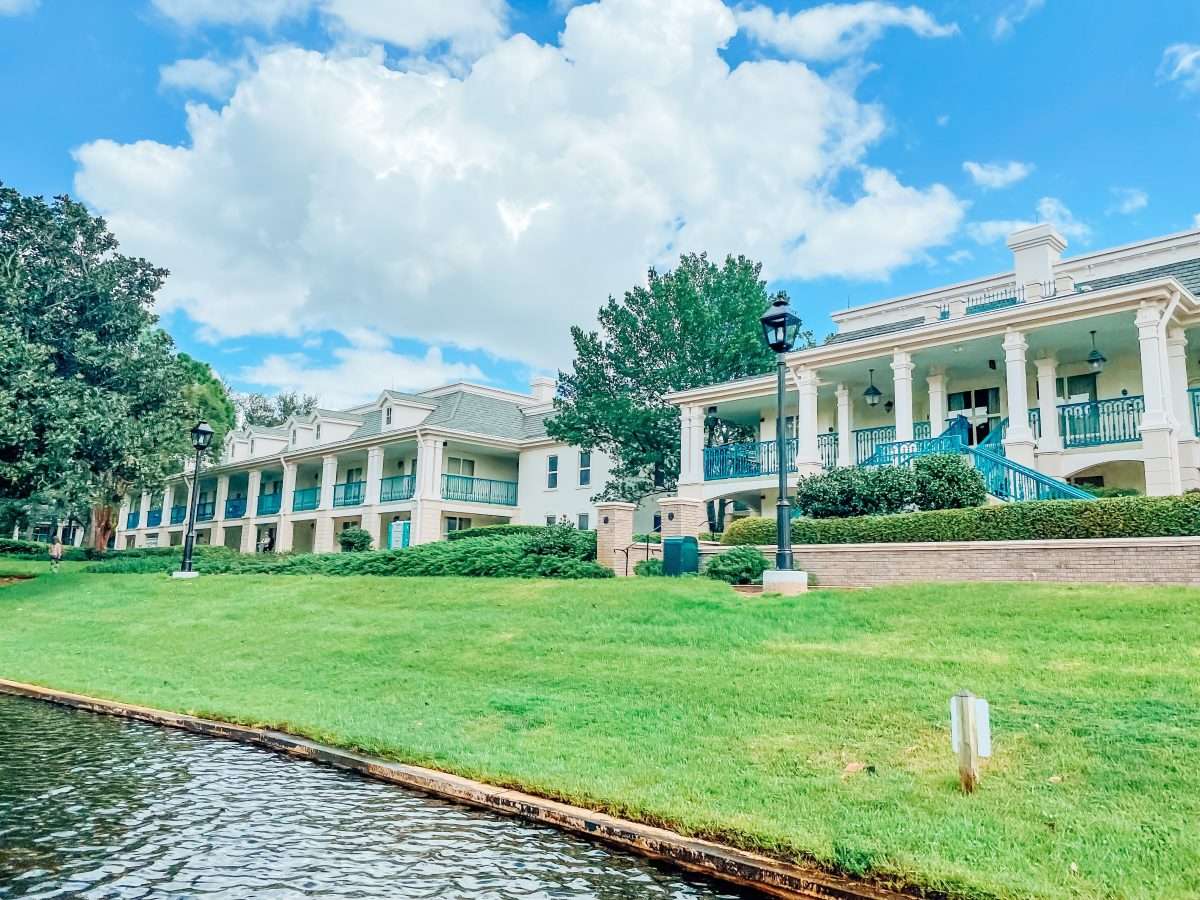 Found in the Magnolia Bend area of Port Orleans Riverside, the Royal Rooms are specially located for easy access to the bridges that cross the river. And thus keep you within decent walking distance of the restaurants, gift shops, and boat dock. There are 512 Royal Rooms that have been decorated and themed at this resort, spread across two buildings. Royal Guest Rooms at Riverside Resort are located in Oak Manor building 90, and Parterre Place, building 95.

Given the expanse of this resort, it’s very important to have a room within manageable walking distance. Know that you can simply request a Magnolia Bend room without the extra cost of a Royal Room if the distance to amenities is a priority for you.

In terms of location, the Royal Rooms are within walking distance of the South Depot Bus station. This is also the Main Lobby location of the resort. Know that the South Depot location for buses is the closest to the Magnolia Bend buildings, and is the LAST STOP on the way to and from the parks among the four bus stops at Riverside. That said, sometimes the bus will already be full by the time it reaches the South Depot. And in the evenings when you’re returning home, you’ll have to wait through 3 other bus stops before you reach your stop. While this wasn’t a huge issue during our stay, it’s good to know if you’re traveling with small children. 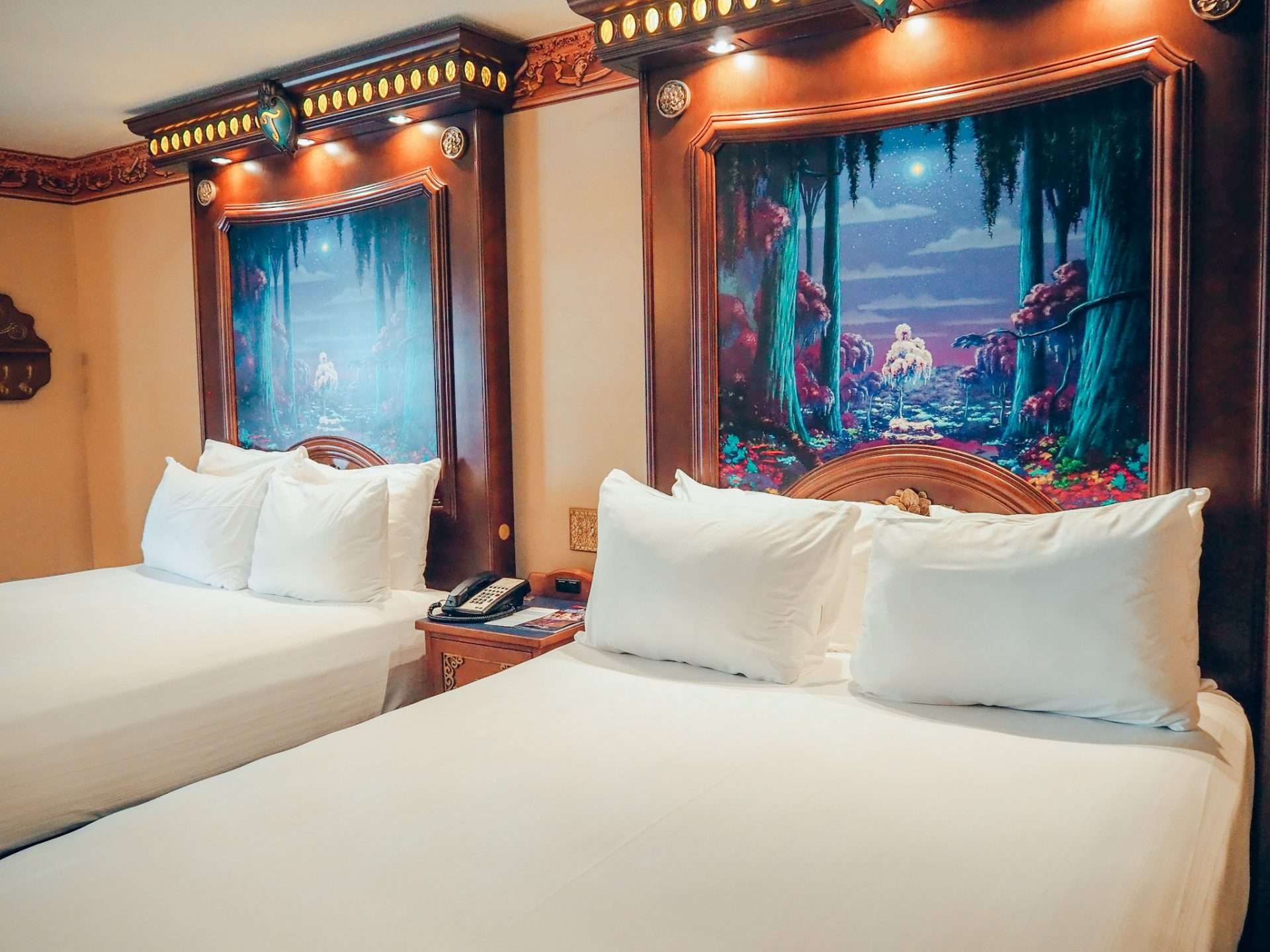 The Royal Rooms come in a few options regarding view. Riverview Rooms give you a Sassagoula River view. Garden View Rooms offer windows that look out into the garden, lawn, or fountain area. Pool View and Standard View Rooms typically look out over the pool or other green spaces. That said, all rooms have an external entrance, like a motel, so any “view” you may have will literally be across that outdoor hallway. As such, paying extra for a view isn’t necessary. It’s not like Boardwalk Inn, where you get a balcony and a view. There are no balconies here, so Port Orleans Riverside Room Types shouldn’t be a big deciding factor in your stay. 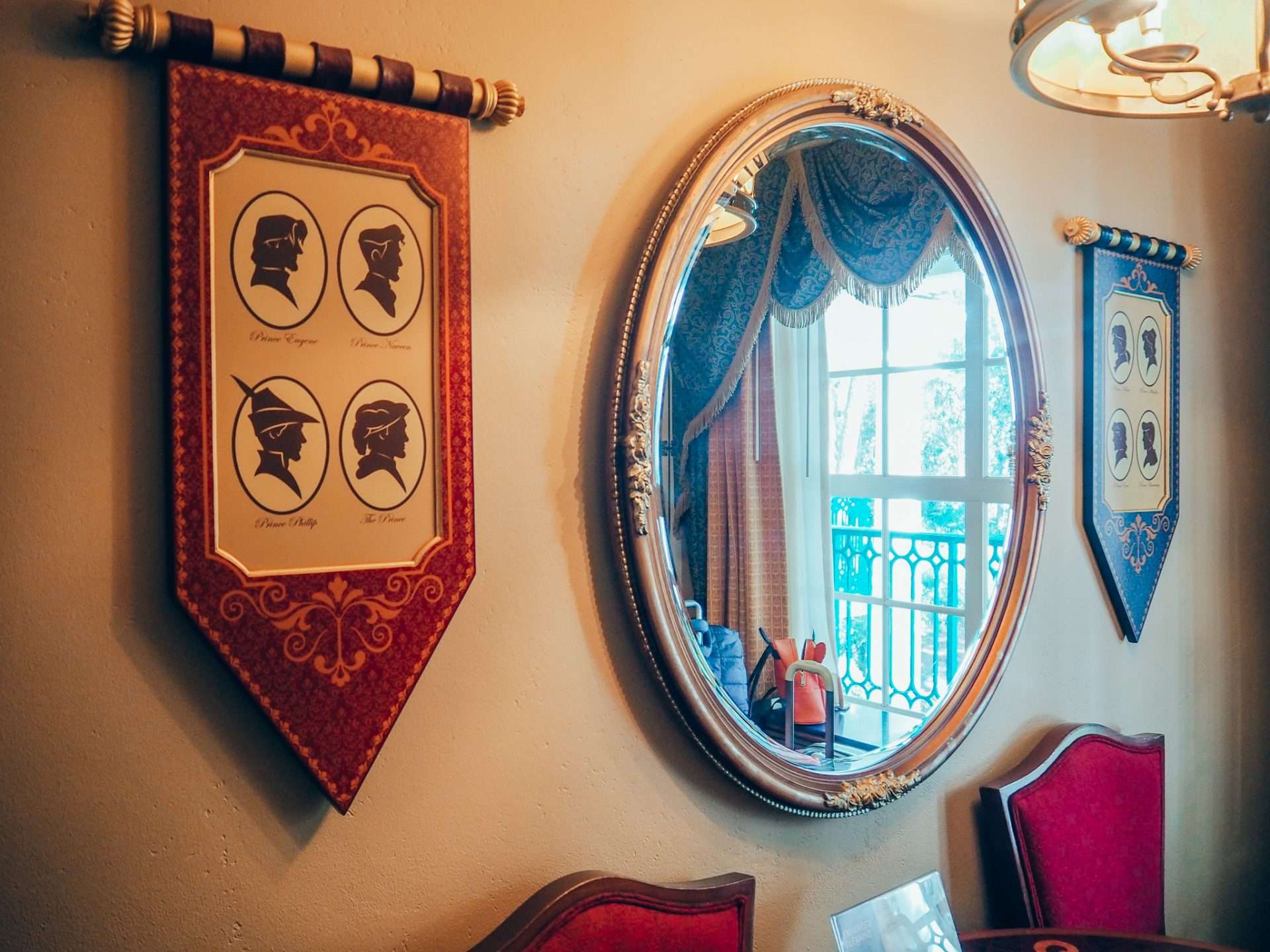 As expected the Royal Rooms at Port Orleans Riverside are all about Disney Princesses. While there are some photos of their respective princes, done in a silhouette style, a little prince may feel the room “too girly” for his liking.

Sometimes considered the Princess Rooms at Port Orleans Riverside, these rooms also include portrait photos of each princess. Ariel, Jasmine, Belle, Cinderella, Rapunzel, Tiana, Aurora, and Snow White are all represented here. But the theme doesn’t stop there, you can find royal touches throughout the room. 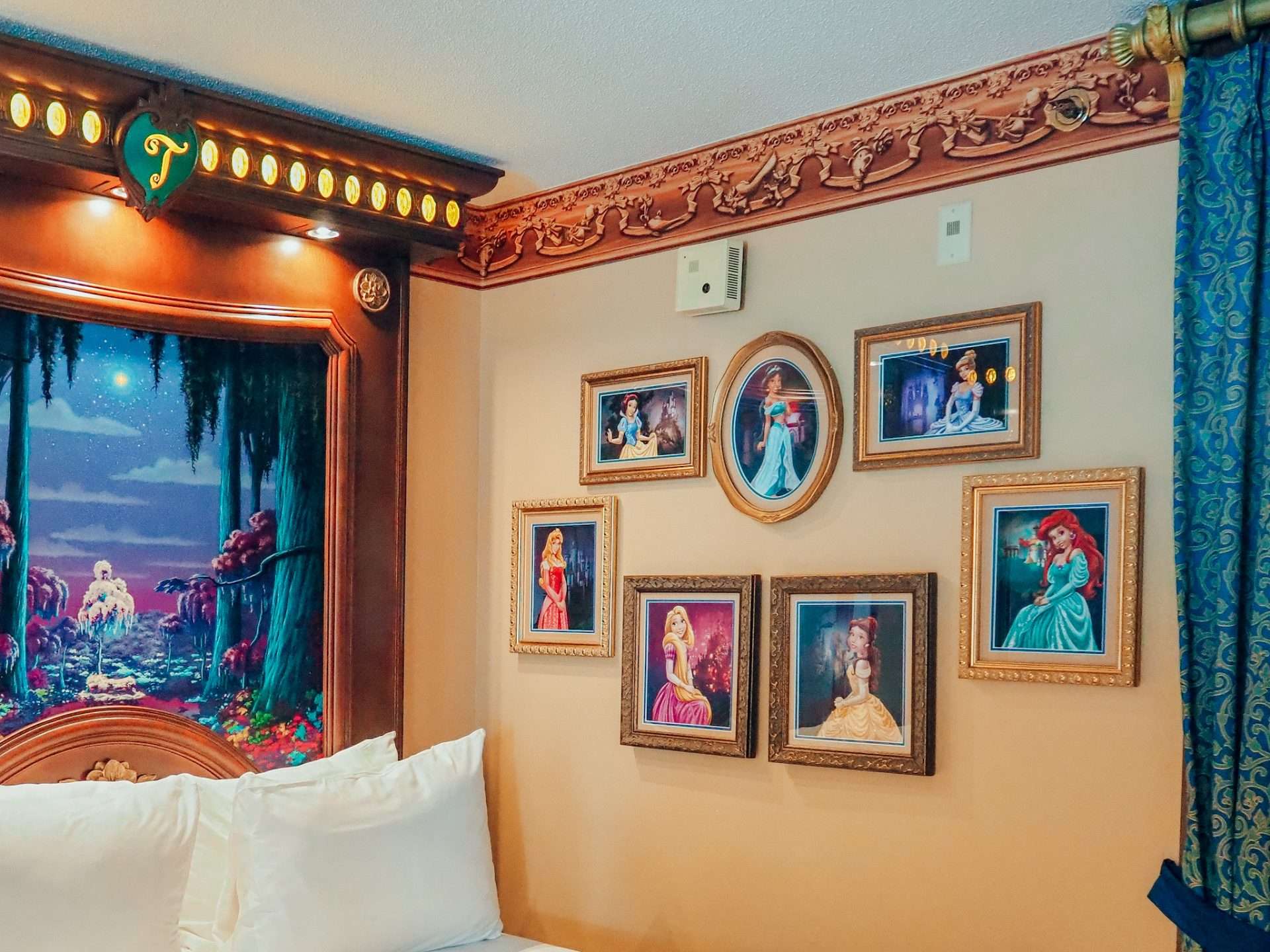 The Royal Rooms at Port Orleans Riverside are all about Classic Castle theming. Heavy dark wood furniture, moldings, and a wallpaper border featuring princess friends in a faux wood grain make these rooms castle-like. Unlike a room that is simply decorated these Royal Rooms are heavily themed. From the heavy wood bed frame to the heavy wood dresser filigreed with gold swirls, there are distinct touches here you won’t find in other rooms. In addition to the Princess and Prince portraiture throughout the room, you can also find several other “Royal” touches. A grand light fixture, decorated encased television box, patterned carpet that includes a faux throw rug, and more are part of this theme.

A tasteful addition to the Royal Room design is found in the water faucet in the bathroom area. 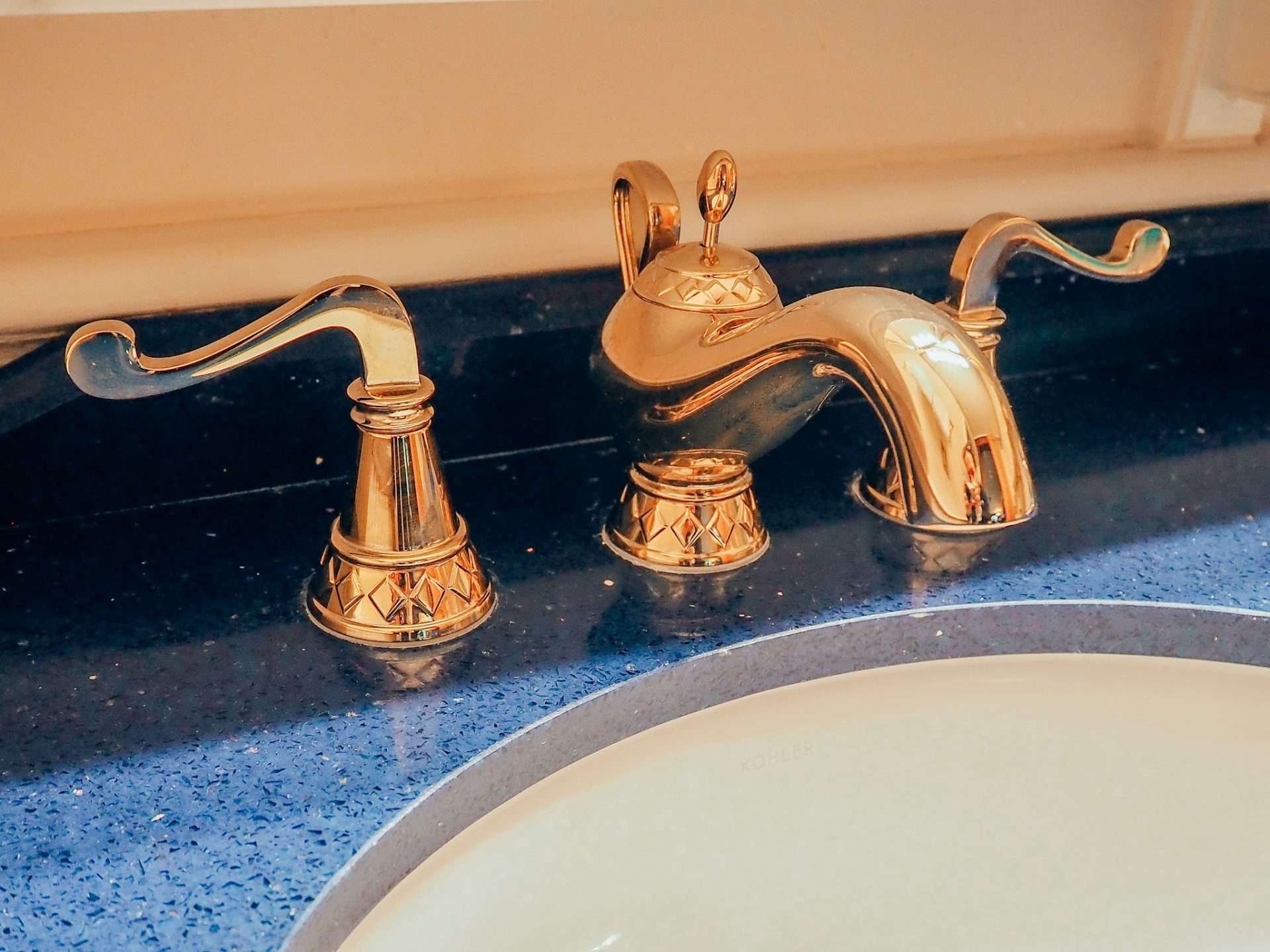 Featuring a fountain scene that looks like it came out of the Princess and the Frog, this headboard features a light show, when you turn on the light switch next to the bed. This short light scene fills the headboard with glittered lights. 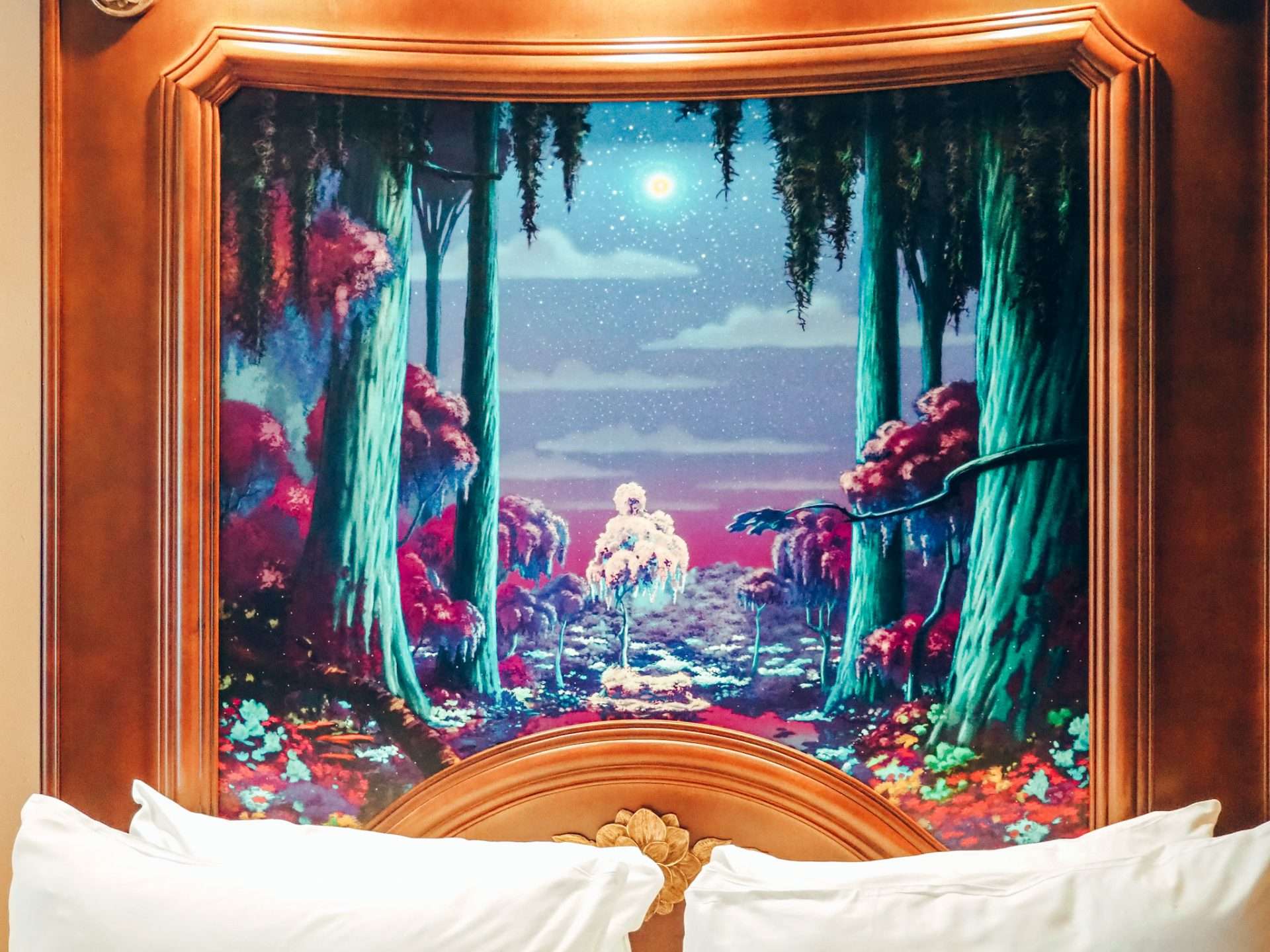 Covering the window are heavy tapestry curtains with a gold fringe that really make the room feel more regal. 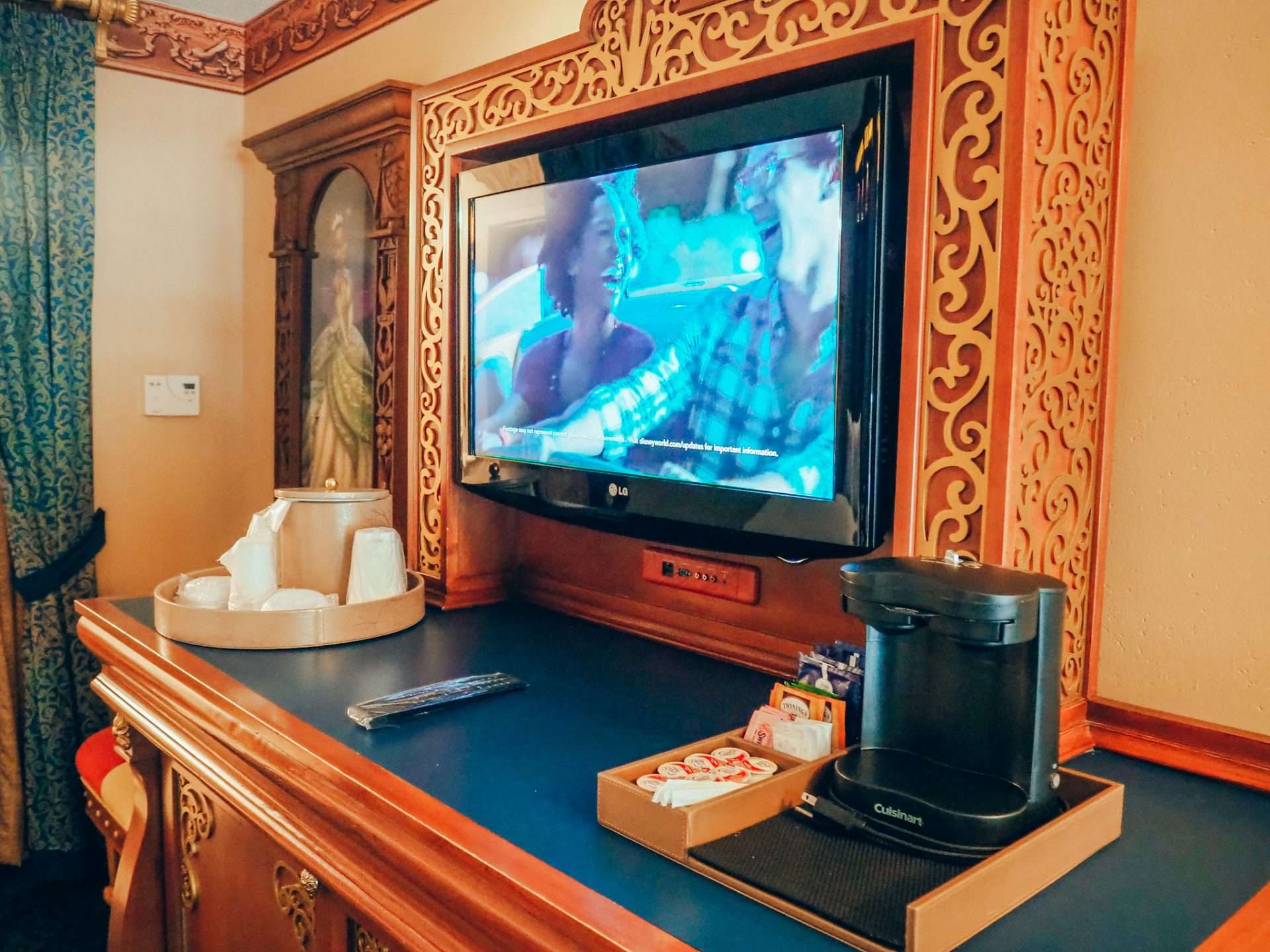 Just like any Moderate Resort at Disney World, you can find a coffee maker and beverage cooler. Complete with built-in shampoo, conditioner and body wash, the bathroom is separated from the sink area. Unlike recently refurbished rooms at other resorts, only a curtain separated the sink area from the bathroom. The beds have queen mattresses, but no under-bed area for suitcases due to the bed design. And the television is also a smart tv that allowed for casting from your own device. always a plus when you’re ready to settle in with your favorite show.

Are the Port Orleans Royal Rooms Worth it?

For us, there were several pros and cons to the Royal Rooms at Port Orleans Resort. Mind you, we’re bringing our experiences from staying at all levels of resorts at Disney World and may be a bit biased when it comes to expectations.

Pros of the Royal Rooms at Port Orleans Riverside

If you have a little princess of your own, it will be easy to see why these princess rooms at Disney World are a good idea. With princess touches all over the room feeling like royalty is a given. 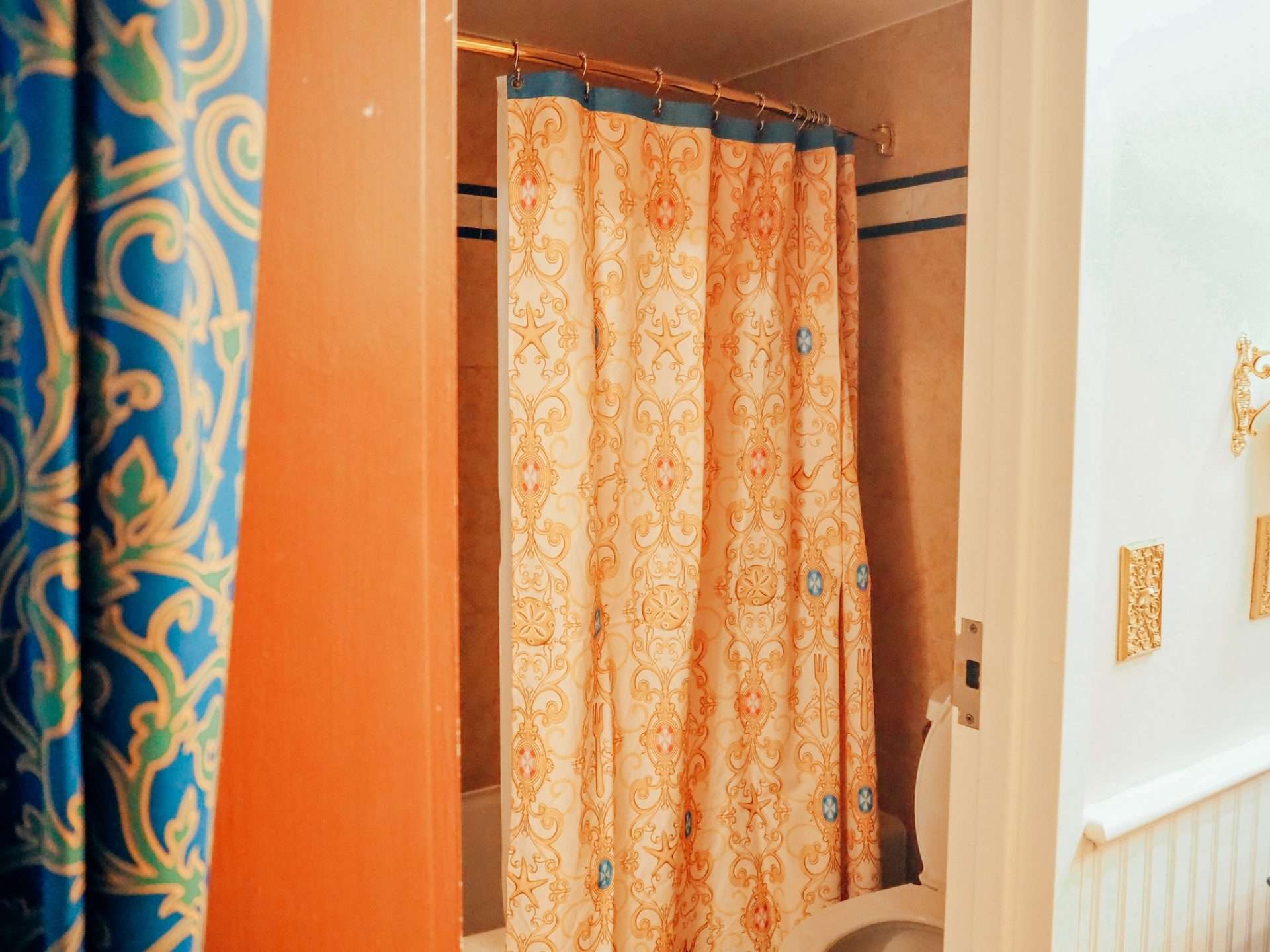 Cons of the Royal Rooms at Port Orleans Riverside

While the Royal Rooms at Port Orleans Riverside are nice we did find a couple of cons worth mentioning.

Port Orleans Riverside is one of the best Moderate Resorts at Walt Disney World, save for the lack of easier park transportation ( like the Skyliner or Monorail.) As such, the regular rates for a standard room stay range between $220- 450/per night. A Preferred Room in general comes with an average $35 per night upcharge. Royal Rooms are closer to an additional $60/ night upcharge. This cost may or may not be a hindrance for you. For our money, if we’re paying the higher cost, we’d rather look at Animal Kingdom Lodge with its views of animals on the savanna or Boardwalk Inn with easy access to the Skyliner, but then neither of them has princess rooms.

The Royal Rooms at the Port Orleans Riverside Resort are a perfect option if you’re looking for something special for the Disney Princess fan. Complete with Disney Princess portraits, and castle vibes, this room is sure to please any kid looking for royal treatment. If you’re a Disney adult trying to justify the price of this royal room, then we’d recommend considering another Disney Moderate Resort instead. The Cabins at Fort Wilderness, Coronado Springs, and Caribbean Beach Resort are all great options with rooms that have been updated.

The transportation options at Port Orleans Riverside were more of a sticking point than we realized on this trip and may have colored our review here. Mainly because we have been spoiled with Disney Resorts within Walking Distance of the Parks on the last few visits. That said, the Royal Rooms at Port Orlean’s Riverside are an excellent choice if you’re curious to see what an “extra” Disney room looks like, and aren’t keen on venturing to the All-Star Resorts. 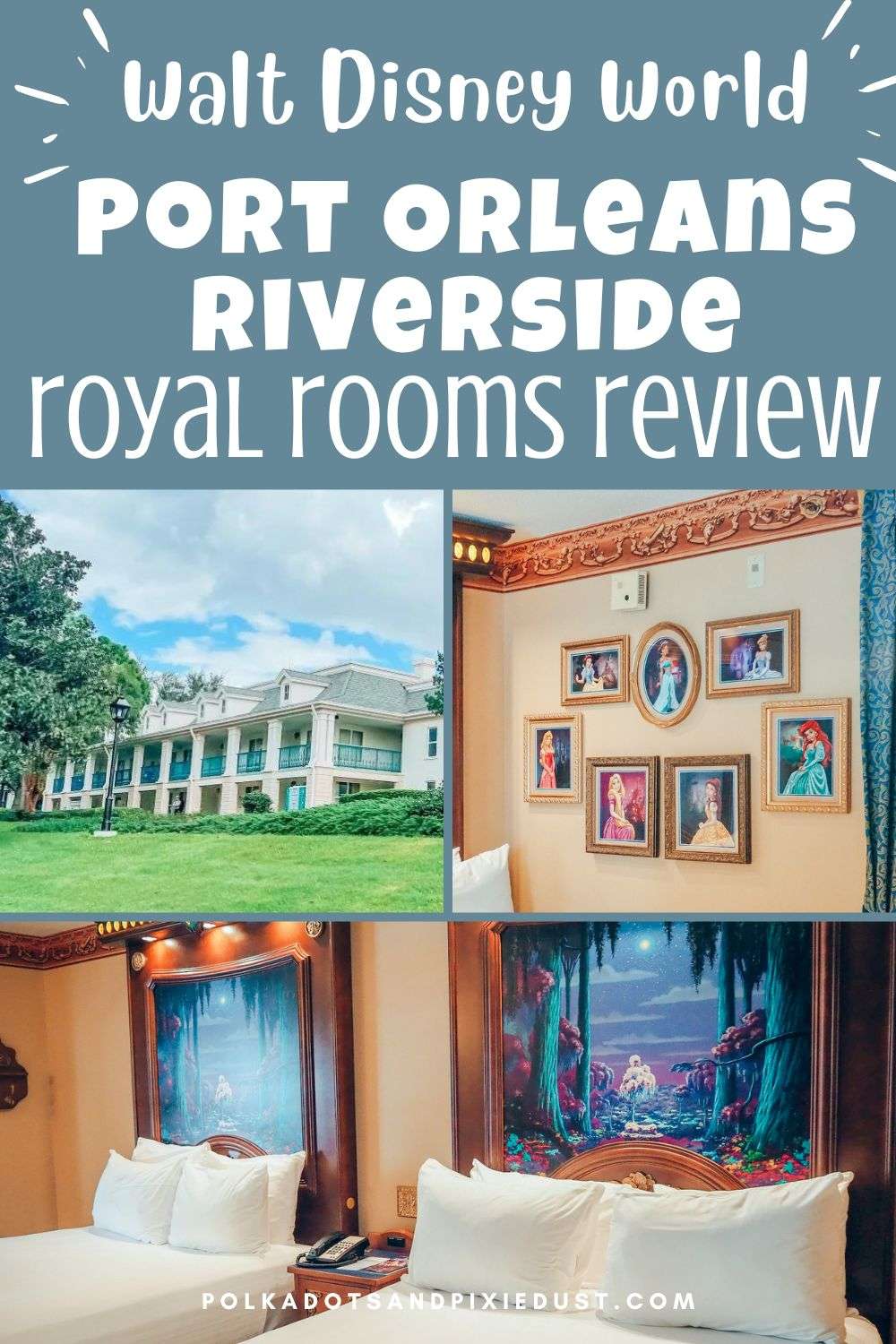