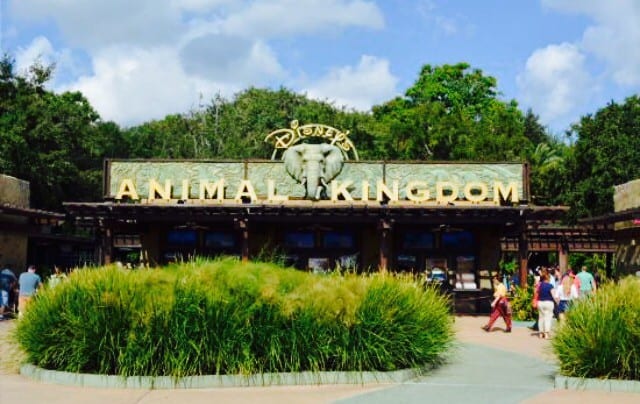 Wild Africa Trek at Disney’s Animal Kingdom had been a special experience we had our eye on for some time. So after going to Walt Disney World annually for the last few years, we decided it was time to try something outside of the box. Behind the Scenes at Animal Kingdom, up close with wildlife and lunch on the savanna? Yes, Please. We absolutely loved the idea of upgrading our vacation with something extra special and since there are so many different experiences that Disney has to offer, it was pretty difficult to choose just one.

We love Animal Kingdom, so convincing ourselves it was time to try out the Wild Africa Trek was fairly easy. Luckily, Disney was offering $50 off the Trek during the dates we were planning to be there which really sweetened the deal given this vacation upgrade runs about 200 dollars per person for a 3 hour immersion experience. 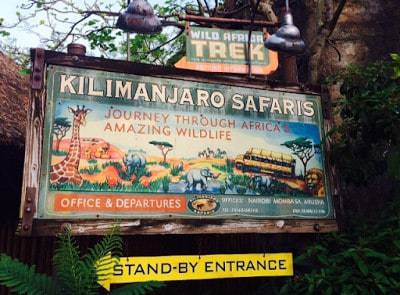 Where do you go in Animal Kingdom?

We chose to go at 11:45 which I wasn’t entirely sure was a great time due to the fact that it was late September and still pretty hot. Luckily, most of the “behind the scenes” at Animal Kingdom are located in very nicely shaded areas and for the mostpart we were able to stay cool.  We were instructed to check in by the Kilamanjaro Safari line and were afraid we wouldn’t be able to find the check in, however there it was, a sign that read “Wild Africa Trek”. Funny how I’ve been through that line at least 20 times and never noticed that sign. Hmmmm. Check in is on the right of the Safari line. You can’t miss it. 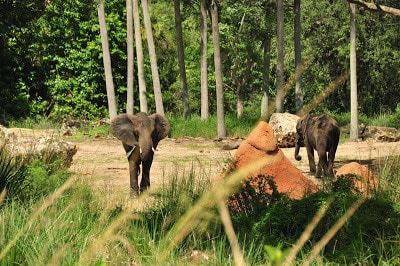 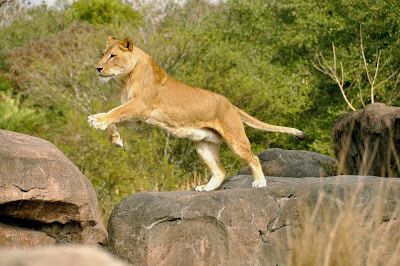 After we checked in, we were given all of our gear. We were each given a water bottle, which was a souvenir to keep(YAY!), a name badge, an ear piece so we could hear what was being said by the guides and fitted for a vest that could be attached to the harnesses throughout the trek.

Note: these are supposed to be fairly snug and they will continue to tighten them throughout the entire tour. Don’t loosen them. Seriously, don’t do it. We were also each given a locker to put our things in. You aren’t allowed to take anything with you that can’t be attached to the vest. This is a safety measure for the animals mostly, but also for your items as they can easily fall into the animal enclosures. You can bring a camera if it has a strap or if it can be attached to the vest, but the Trek also comes with many high quality photos that can be downloaded and the guides will take just about any photo of you and your party that you request(another YAY!). So I opted out of taking my camera as I tend to live my life through my lens too often and just downloaded the photos provided, which I have to say were pretty impressive!

Rochelle ended up taking her camera and later mentioned that it was a little difficult to manage the rope bridges and stop and take pictures at the same time. Obviously its a personal choice, but either way you will end up with some very nice photos. All of the photos on this post are from the trek, so you can see they are very high quality. 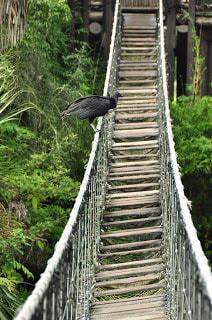 What do you do on Wild Africa Trek?

We were introduced to our guides and given a little intro, took a group photo and learned a few Swahili words and then we were off. The Trek actually starts with walking through the main area of Animal Kingdom. Yes people will be staring at you. Because they are jealous. At least that’s what I kept telling myself anyway. You will exit the public park area and enter a woods like area, which will lead you to the hippos. You can get pretty close to the hippos and talk to one of the cast members who takes care of them.  Very cool. 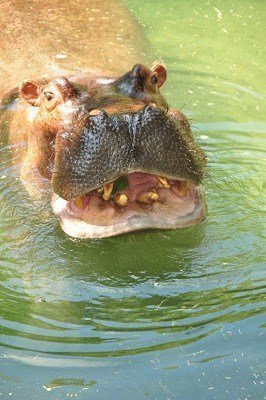 They will then take you through more woodsy areas and eventually to a pair of rope bridges that cross over the alligator enclosure. Okay. So the bridge looks pretty shady. 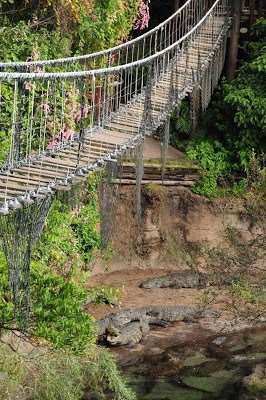 The boards are broken and some of them are even missing. Questionable, right?!  Keep in mind….its Disney. This is what they do. Everything is perfectly safe and the guide even mentioned to me at one point that if your legs aren’t long enough to stretch across the broken boards, you can put your full weight on the rope net that is directly under the boards and it would support you. And further, if by some weird chance that didn’t work, the harness would keep you from falling. Again, its Disney. They’ve got this. And besides, it definitely gives you some pretty awesome photo ops on that bridge. 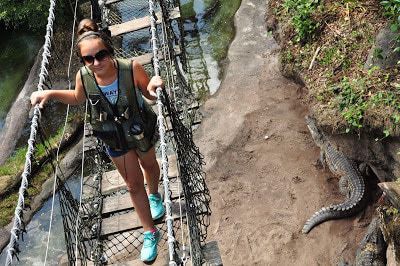 After that terrifying experience, you will have the chance to talk to some more cast members about the gators.  Again, very cool. Then its time for a break! And food! We all took off our gear and headed to a “special” jeep, which would take us through the safari that would normally be seen on the Kilamanjaro Safari ride, but at a slower pace and with more up close opportunities of the animals.

We were given binoculars and a magic towel to cool off, which I have to say, was amazing by 12:30 in the hot sun. The guides were great as they gave us info about the animals and the park in general. And they were always on the lookout for great photo ops. 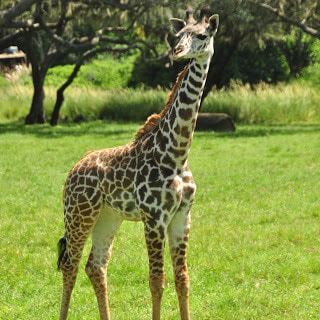 After that we headed to a beautiful hut type structure for lunch, right on the savanna which had a water bottle refill station as well as restrooms. We were given our food and Jungle Juice, which is the same juice as POG juice at Ohana and probably one of my favorite beverages at Disney World. So yummy.

The food was really great too. It came in a tin and consisted of chicken curry salad, sun-dried tomato hummus and pita, tandoori shrimp, smoked salmon roulade with dill, air-dried beef and prosciutto and ginger and mint marinated fruit. I enjoyed all of it and thought they did an excellent job. 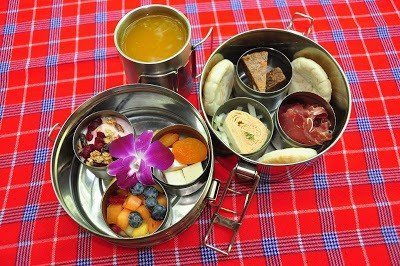 The Africa Trek is definitely something I would recommend if you enjoy animal kingdom. While its a little on the pricey side, it’s definitely a Disney experience you won’t forget. 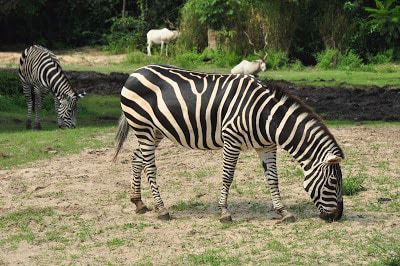 We paid $130 per person with the coupon; prices vary depending on the season but I wanted to give you a little bit of an idea price-wise because I know when I was looking, I couldn’t find a price anywhere.

If you go in the summer, choose the earliest time possible. They do their best to keep you cool, but it gets very hot. We were there in late September and by the time got our magic towel, we were really needing it to cool off. Its Florida, it gets hot.

The Best Wildlife Experiences in Orlando

Looking for other Wildlife adventures in Florida? Check out this article for a roundup all the Best Animal Encounters in Orlando! 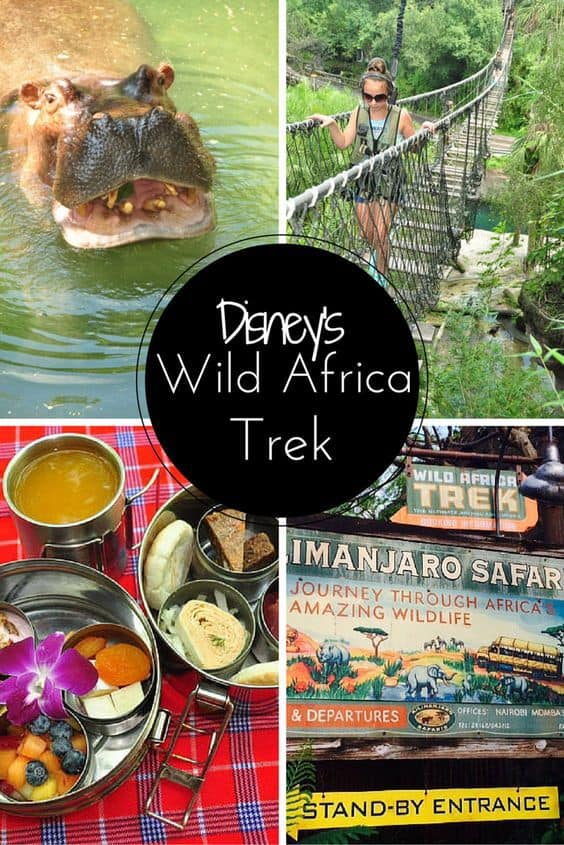 Frozen Ever After in Epcot, Walt Disney World