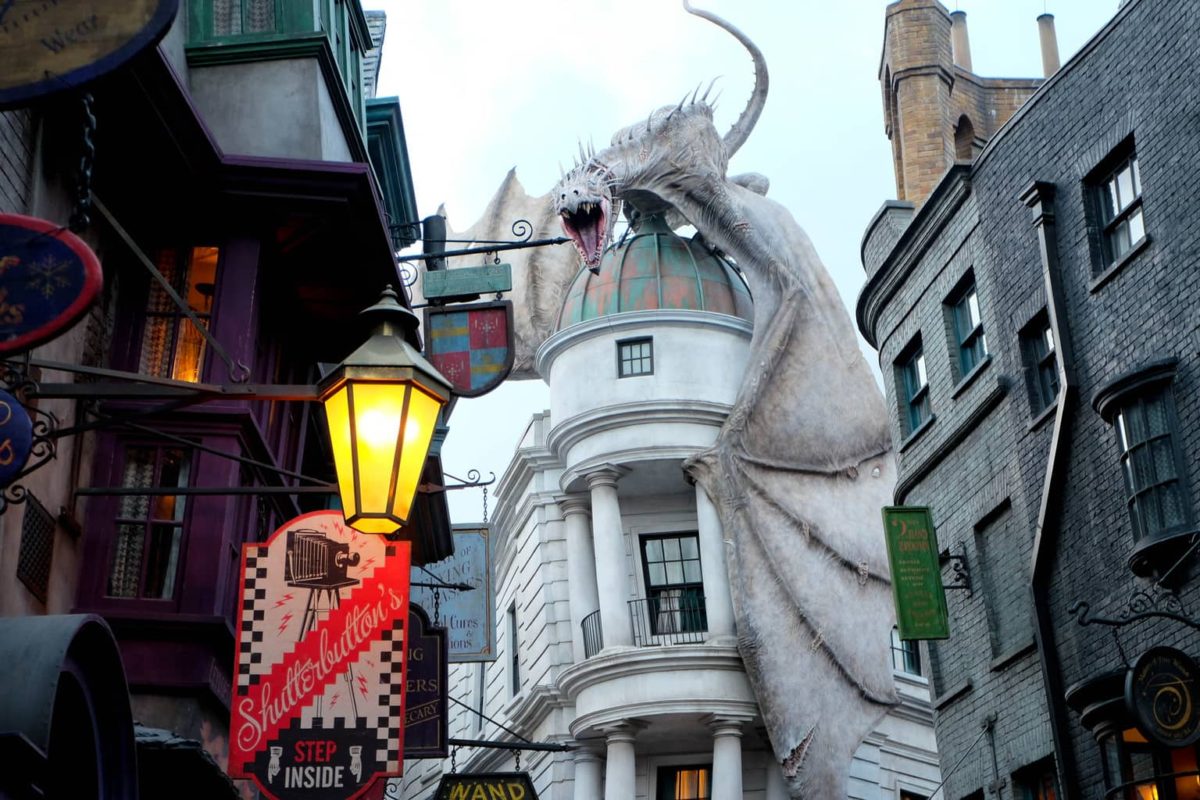 So we have a confession. We are obsessed with Harry Potter. Utterly and hopelessly obsessed. We have a Harry Potter movie marathon each February, complete with treats, copycat butterbeer, wands and yes, even house scarves. We own two separate versions of the book series and own both the DVD series as well as digital copies… you know, just in case the DVDs fail us one day. And we each know our House, Patronus and have dabbled here and there in Herbology. You get the point. So when we heard about the Wizarding World of Harry Potter at Universal Studios, we knew we needed to catch a flight to Orlando and see what this magical place was all about. 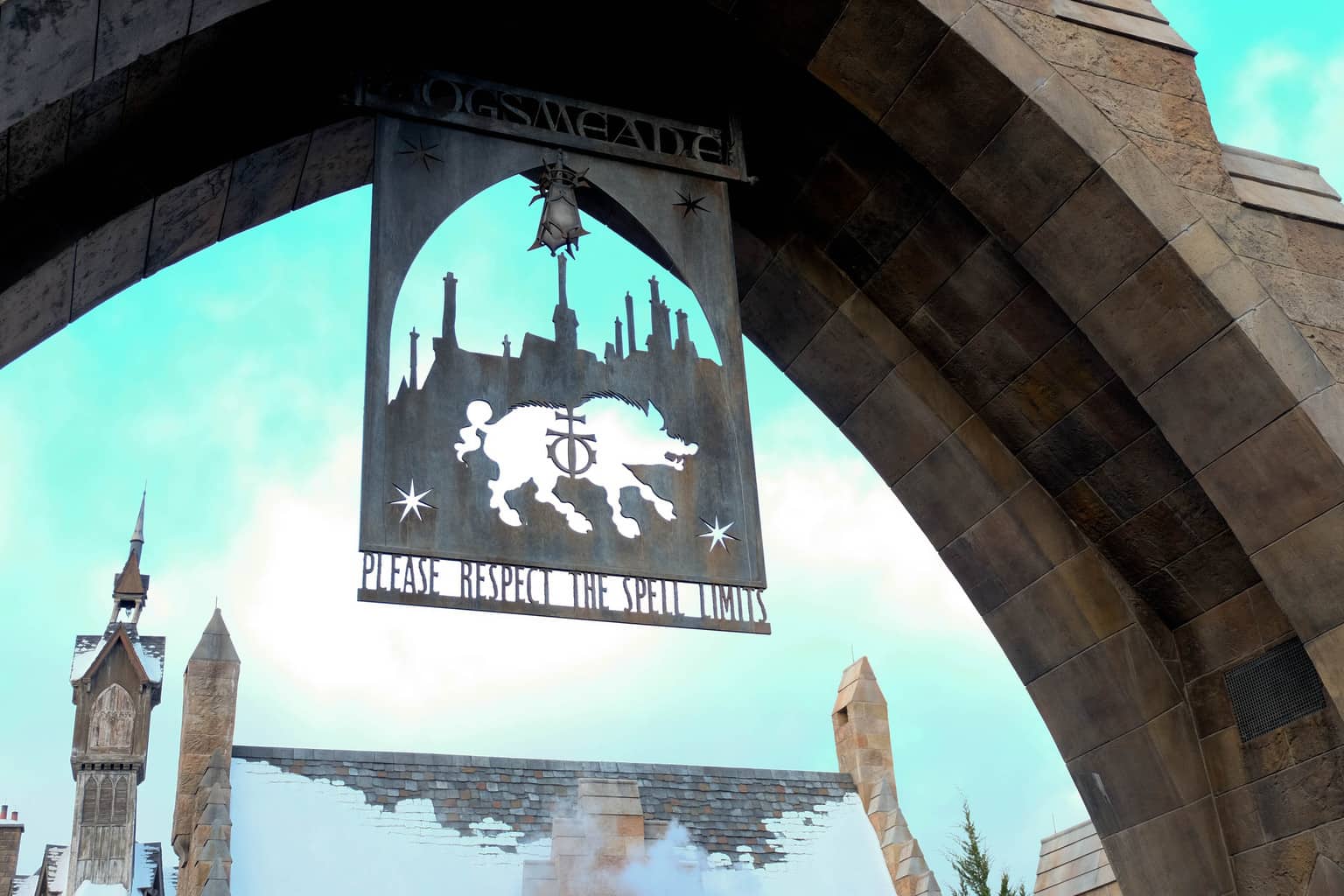 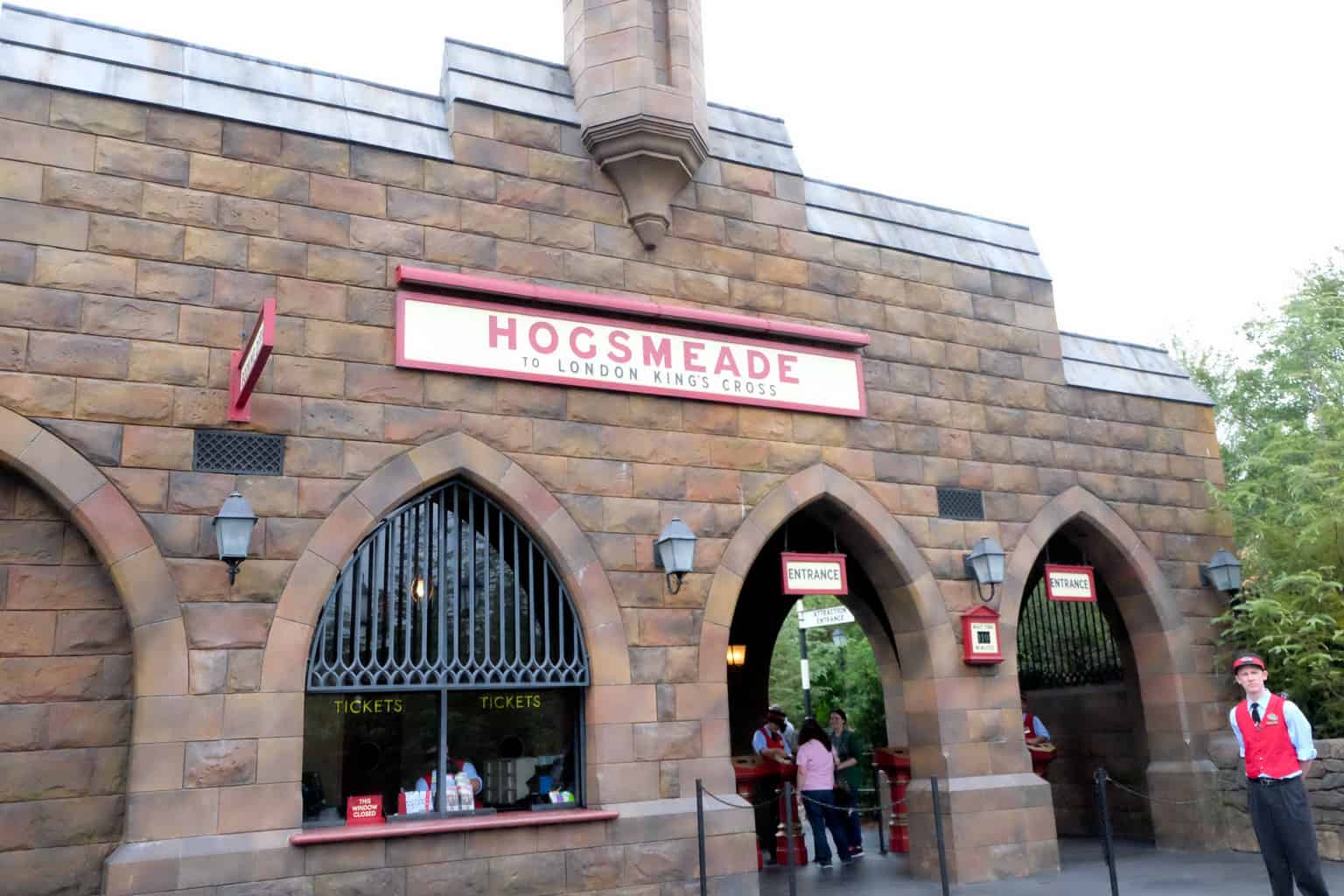 Fitting Wizarding World of Harry Potter in one day, may have just gotten easier. As both Hagrid’s Magical Creatures Motorbike Adventure( Virtual Line ONLY) and Harry Potter and the Forbidden Journey are both rides that are part of the virtual system. So, once you have your place in those lines, you can explore the rest of Wizarding World while you wait.

To access the Virtual Queue system and reserve your rides, here’s what you need to know.

With the addition of Hagrid’s Magical Creatures Motorbike Adventure, how you plan your day can vary greatly around what we’ve laid out here. Not only have wait times been hours long, but the ride often experiences technical difficulties that could modify your day. This ride is ONLY available via Virtual Queue, and is NOT accessible with an Express Pass. So you can skip that cost if you’re only visiting the Wizarding World. We talk more about that below.

That said, just like any other ride in Universal Studios, the same strategies for maximizing your time in the park applies. Arrive early, have the right kind of tickets, don’t walk when you can take the train, and do the higher priority rides first. With Universal Studio’s Virtual queue system now in place, the

Wizarding World of Harry Potter in One Day

If you’re wondering how you can squeeze the Wizarding World in during your Walt Disney World vacation, are only able to afford one days worth of tickets, or just really don’t feel like spending a ton of time in a theme park, never fear. Its actually not that difficult to see the Wizarding World of Harry Potter in one day. Here’s how we recommend you do it! 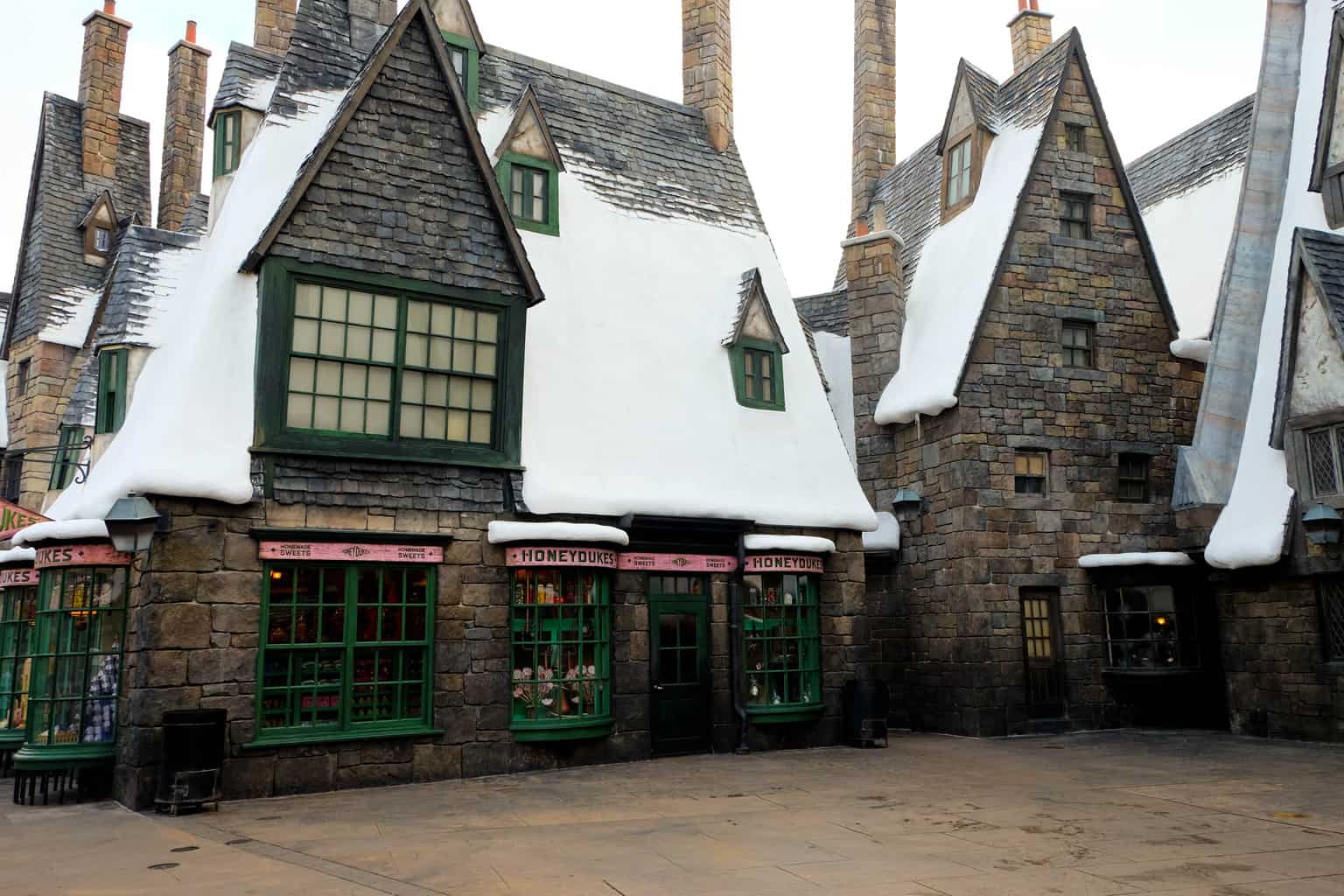 You don’t have to stay on site for this perk, but you will want to book your vacation including accommodations and tickets through a Universal Vacation Package. We stayed offsite at a nearby partner hotel that was a 4 minute drive from Universal and saved hundreds of dollars while still getting early admission. You can find the early admission calendar here, to see which park is opening early, at what time on what days. Having this will make a HUGE difference in wait times whether you are arriving at early or at park opening. Islands of Adventure usually opens first, so you’ll want to head there and go straight to the back of the park, to Hogwarts castle. Its the only part of the park open early, so just follow the crowd.

Which Rides in Wizarding World of Harry Potter Should I do FIRST?

Once inside the park , if you are not making a mad dash to rope drop Hagrid’s Magical Creatures Motorbike Adventure then you can stop to take a few pictures of the empty Hogsmeade and then go straight to Harry Potter and the Forbidden Journey. When we were there, we had a 10 minute wait at 8am. And this is a queue we would go through again and again just to see the details. It is stunning and is really something to experience. We kind of let people go in front of us so we could take it all in. This is a queue that you will have to store your belongings in a locker for, so if you want pictures, make sure you bring your phone or something that fits in your pocket. 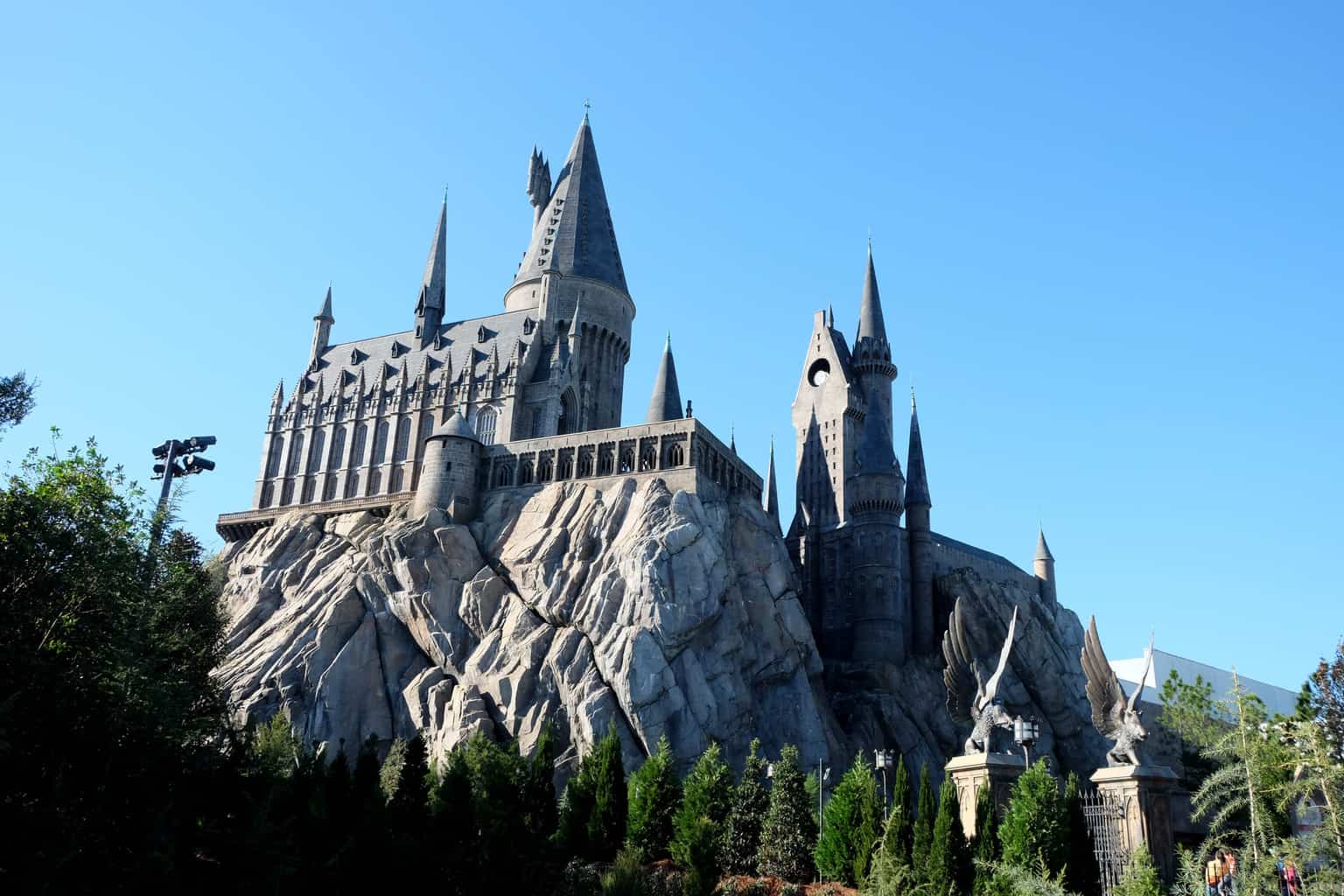 Get the Park to Park Pass at Universal Studios

This is really non negotiable. The only way to see the Wizarding World of Harry Potter in one day is to have the park to park pass. If you don’t, you’re going to miss one of the parks, its that simple. Mainly, because you will need a park to park ticket to ride the train between Hogsmeade Station and Kings Cross Station.

After you’re finished flying above Hogwarts with Harry, Head over to the Hogwarts Express. Unless of course, you want to grab a Butter Beer, which trust me you do, then head over to Hogsmeade Station.

The Hogwarts Express will usually start running around 8:30ish (assuming that the Universal opens at 9) so if you can be among the first on that train ride over to Kings Cross Station, it will put you ahead of the people who are coming in when Universal Studios opens.

Diagon Alley is located at the back of Universal Studios. So taking the train over early will put you ahead of those racing to the back even if you don’t catch the first train out of Hogsmeade. You’ll want to experience the train in both ways anyway so this is your first opportunity. It’s a pretty short ride and is the only way you should be getting from Hogsmeade to Diagon Alley

Once you get to Diagon Alley, take a few minutes to take a few photos without all the people and head over to Escape from Gringotts. This was our absolute favorite ride there and I think we rode it 10 times. This is another one you will need to store your belongings, so throw your stuff in a free locker and head to the bank!

Diagon Alley is SMALL and it gets very crowded very quickly. Since shopping is a huge part of the experience in Diagon Alley, my recommendation is to head straight to the shops after you’ve had your fill of being chased by Bellatrix and Voldemort at Gringott’s. 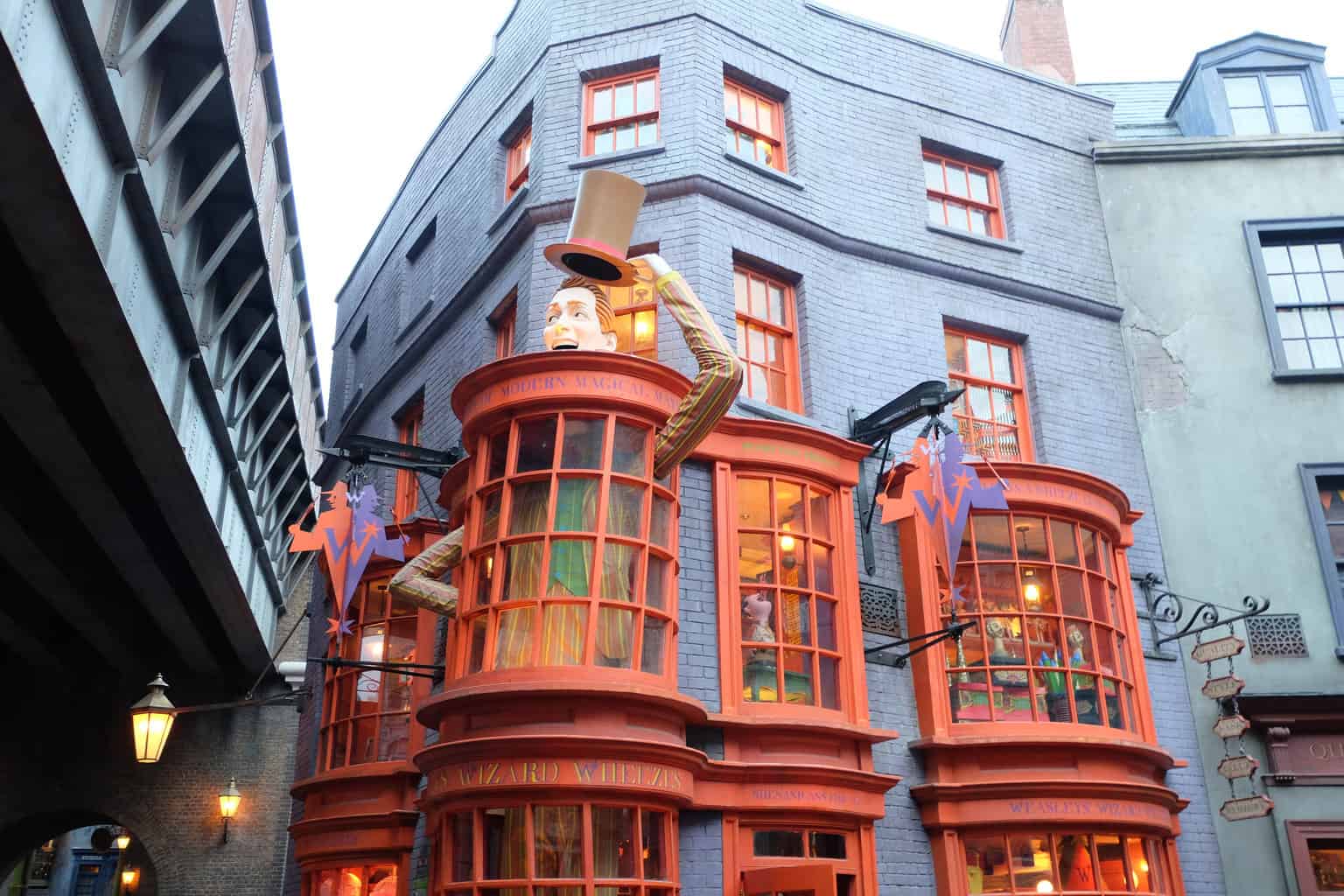 Shop the Shops at the Wizarding World of Harry Potter

We loved Weasley’s Wizard Wheezes of course! And if you’re in need of a wand you can visit Ollivander’s for the wand ceremony. There’s a shop in both locations- and I recommend you start this early as well. The lines to perform spells can get pretty long. So if you’re planning to buy a wand, do it early to get ahead of the game. If you’re not interested in seeing the wand ceremony (we recommend that you do), you can also buy a wand from various carts throughout the Wizarding World.

While in Diagon Alley, be sure to visit all of our favorite places.

They’re all great and are a nice break from the heat as that area is shaded. And don’t miss Knockturn Alley. You can shop at Bourgin and Bourke’s, and perform spells to escape some of those crowds and the heat for a little while.

On your way out of Diagon Alley, stop at 12 Grimmauld Place and catch a glimpse of Kreacher peeking out the upstairs window.  He’s pretty creepy and will peek out every so often when muggles are knocking at his door. 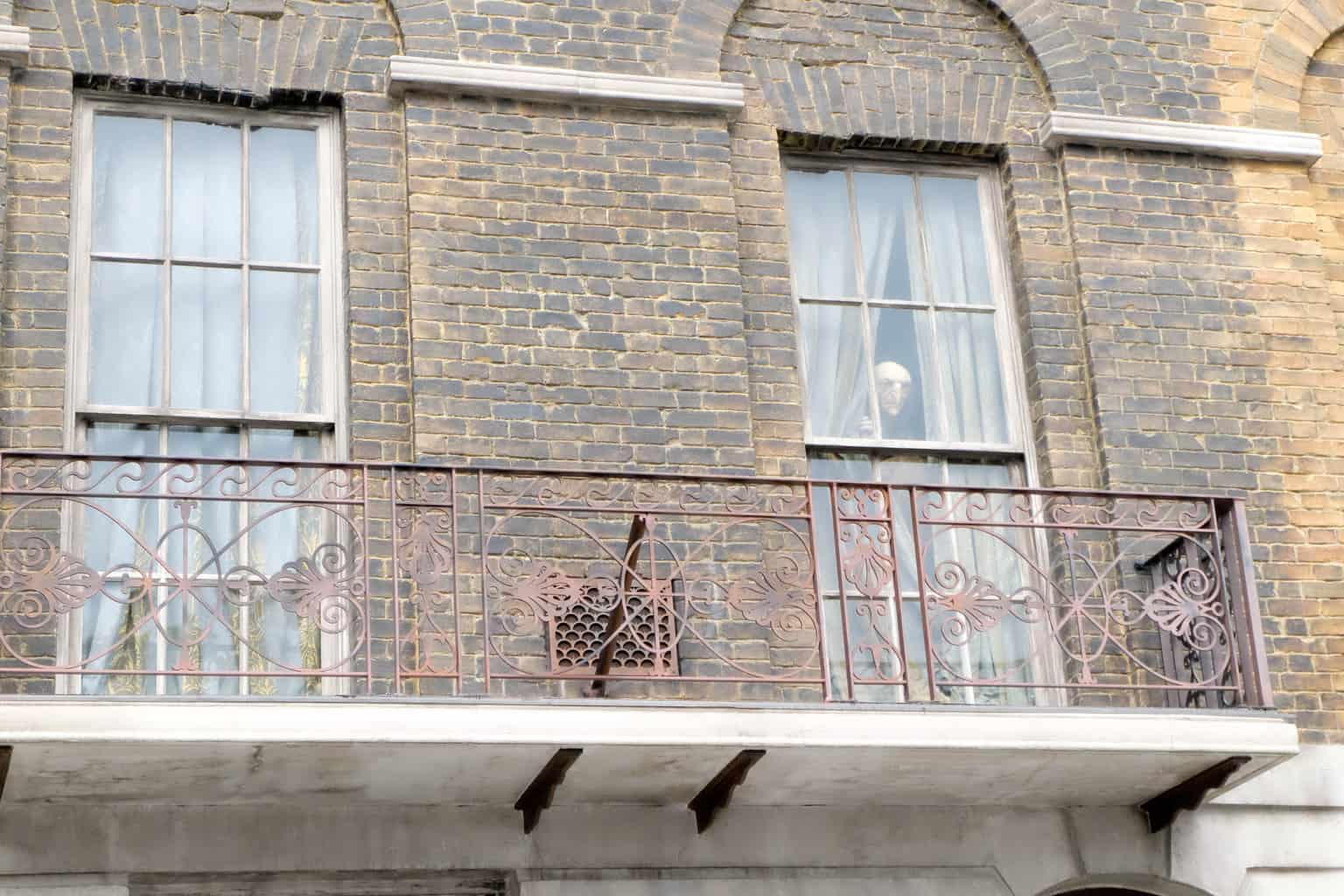 Before you get back to Kings Cross Station, stop and chat with the Knight Bus Driver. He is hilarious and you can get your photo taken with him if you want. Step inside the red telephone booth and listen to a message from the ministry of magic. And and then head back to the Hogwarts express. We actually found the bus driver and the telephone booth to be less crowded later in the day but you can do this either time.

Be sure to pay attention when getting on to platform 9 3/4 on your way back to the train, the visual effects are amazing and are something you won’t want to miss!

Once you get back to Hogsmeade, be sure to stop at Honeydukes to get your fill of chocolate frogs and pumpkin pasties. You can also perform spells throughout Hogsmeade. Or grab some food at Three Broomsticks and drink all the butter beer you can. Be sure to check out the  performances from students from Durmstrang and Beauxbatons Academy.  Stop and listen to the Frog Choir. And before you leave you can even send a postcard via Owl Post.

You can find both Dragon Challenge and Flight of the Hippogriff in this area. And we never noticed the lines very long for these at all. So they are perfect to add into your day after you have finished your higher priority rides.

We didn’t take advantage of the single rider lines here, but you can save a lot of time by using the single rider line, if you’re traveling with a group of people where this makes sense. I recommend at least going through the regular queue once at both Forbidden Journey and Gringott’s though because they are both extremely impressive.

If you are only going to the Wizarding World of Harry Potter, and already springing for the park to park ticket, the Express Pass is something you should just skip. While it’s pretty much the equivalent of the fast pass at Disney and will get you through the line faster, it’s easier to just get to the important rides at rope drop and save some money.

For us the cost of this pass, in addition to the park to park, just made it feel crazy-expensive and we can easily wake up a little earlier to get to those rides first, which is what we recommend.

Stay late in the Wizarding World of Harry Potter

You’re in the Wizarding World of Harry Potter, why would you want to leave? We actually noticed a lot of people leaving around 5ish while we were there and the line for Forbidden Journey had gone down quite dramatically.

Wizarding World of Harry Potter in One Day

Its actually really easy to see both Hogsmeade and Diagon Alley at the Wizarding World of Harry Potter without feeling rushed in one day. Especially, if you plan to arrive early and stay late. Whatever your Universal Studio plans we’re sure you’ll be able to tackle this one day challenge, without feeling rushed or wondering where all your money went. 🙂 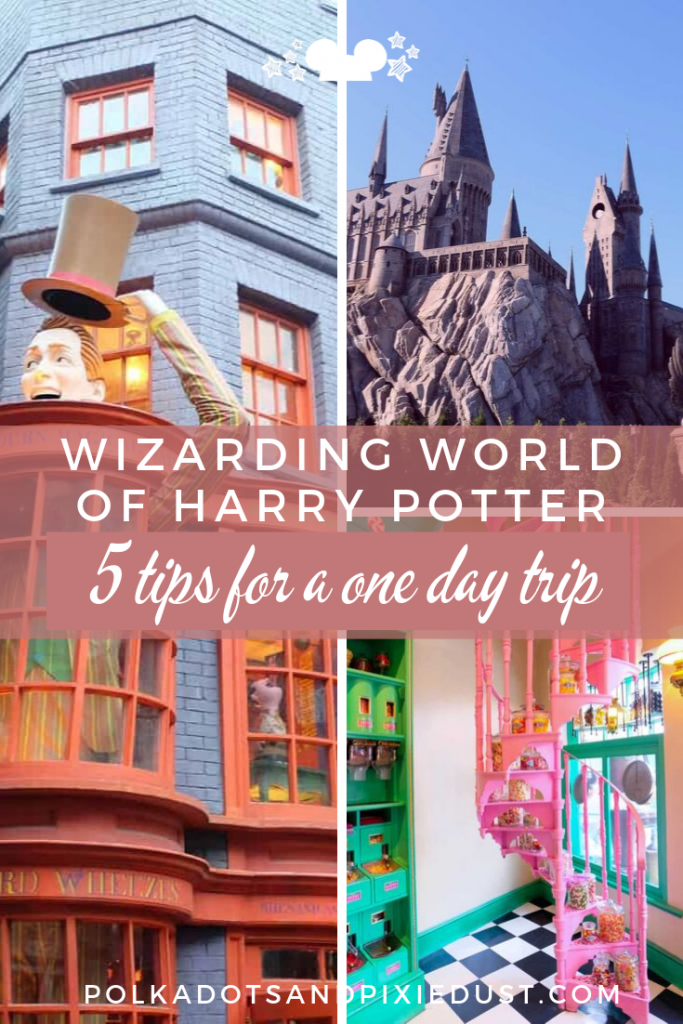 Wizarding World of Harry Potter On A Budget