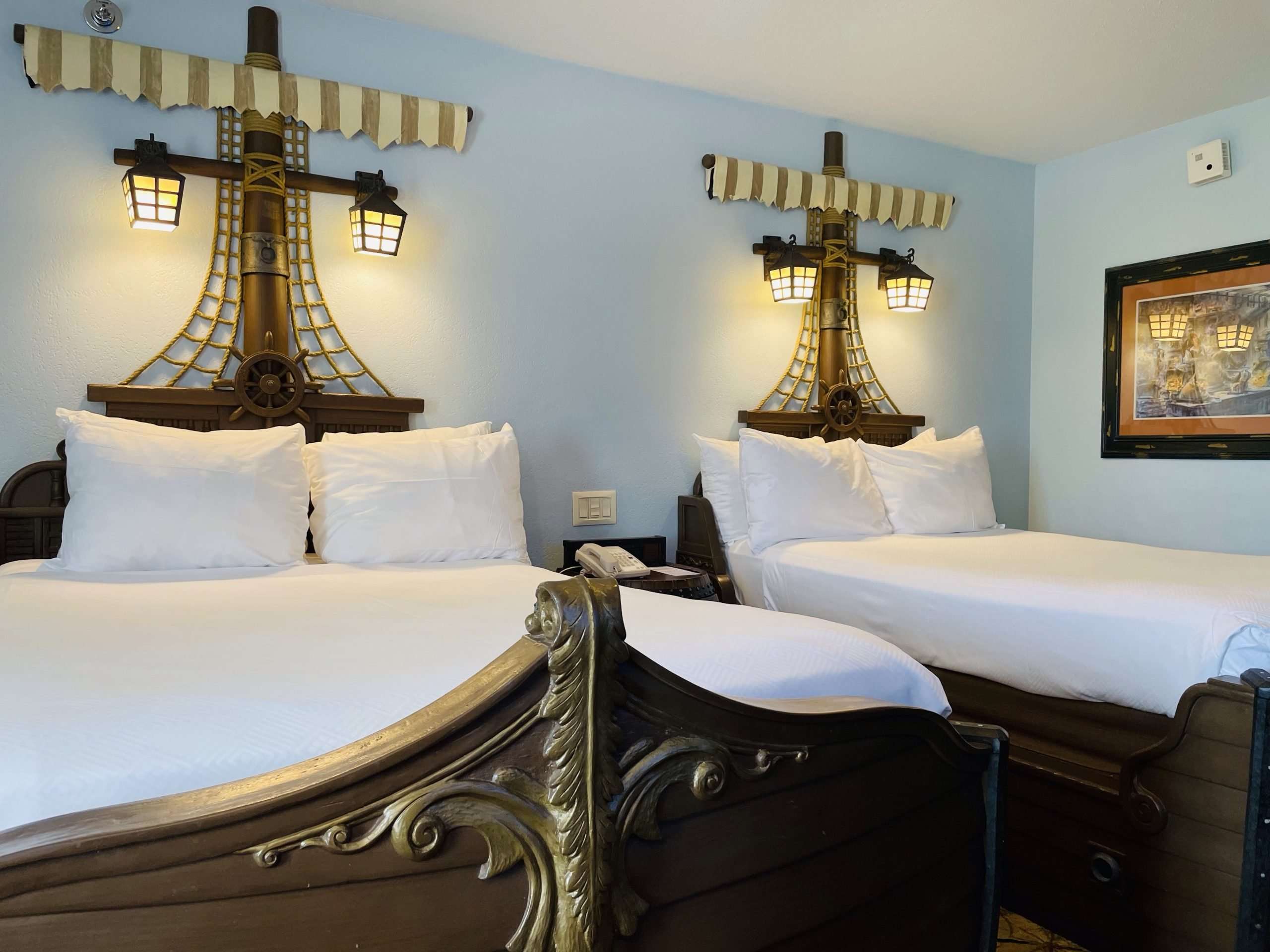 We love Disney’s Caribbean Beach Resort. We know that it often gets a lot of criticism over its size; but with Disney’s Skyliner transportation now available there and Disney’s Riviera Resort within walking distance, we feel this resort has a lot more going for it than it once did. Since we never had stayed in the Pirate Rooms at Caribbean Beach, we decided to give them a try on our last trip. 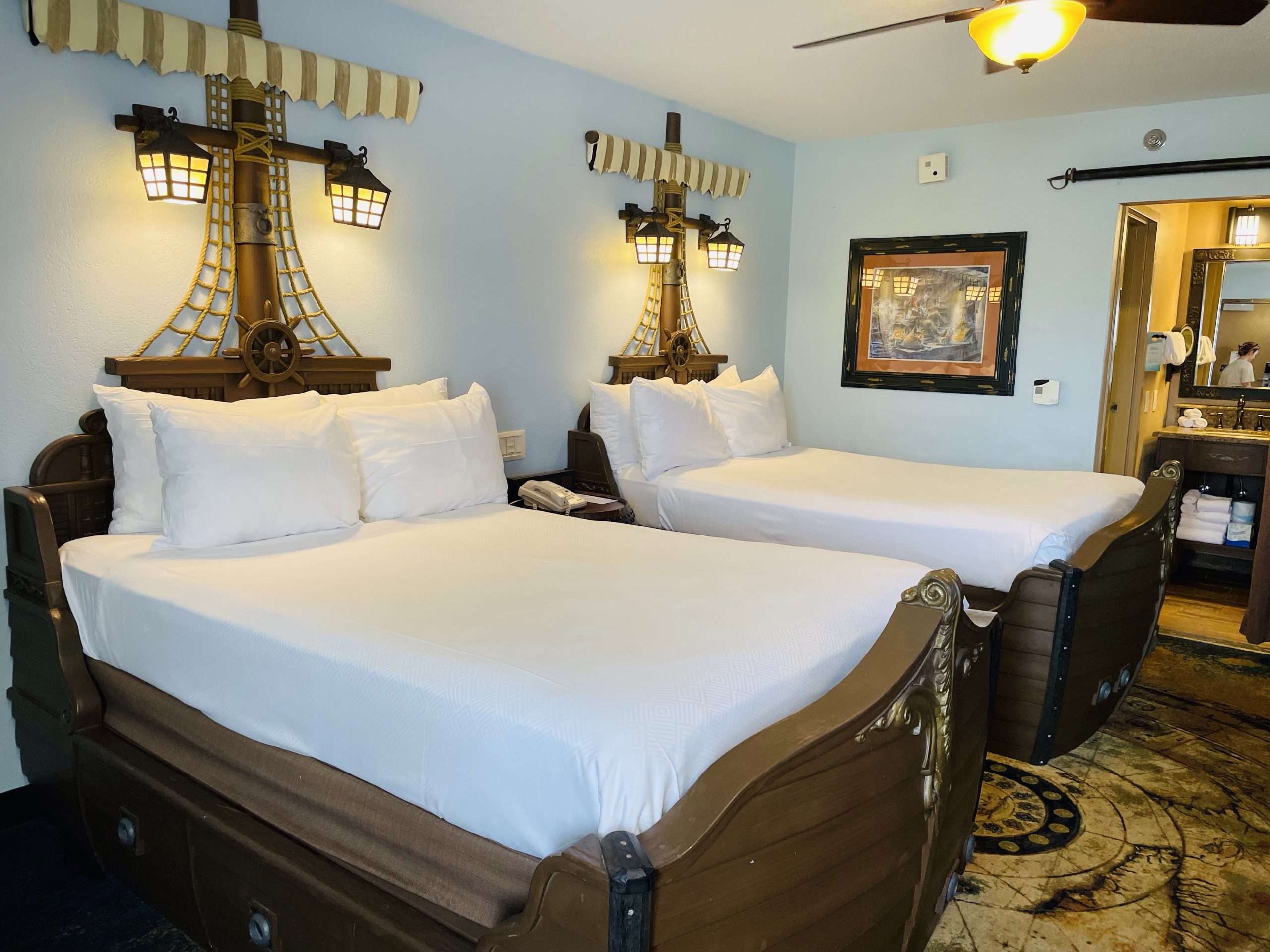 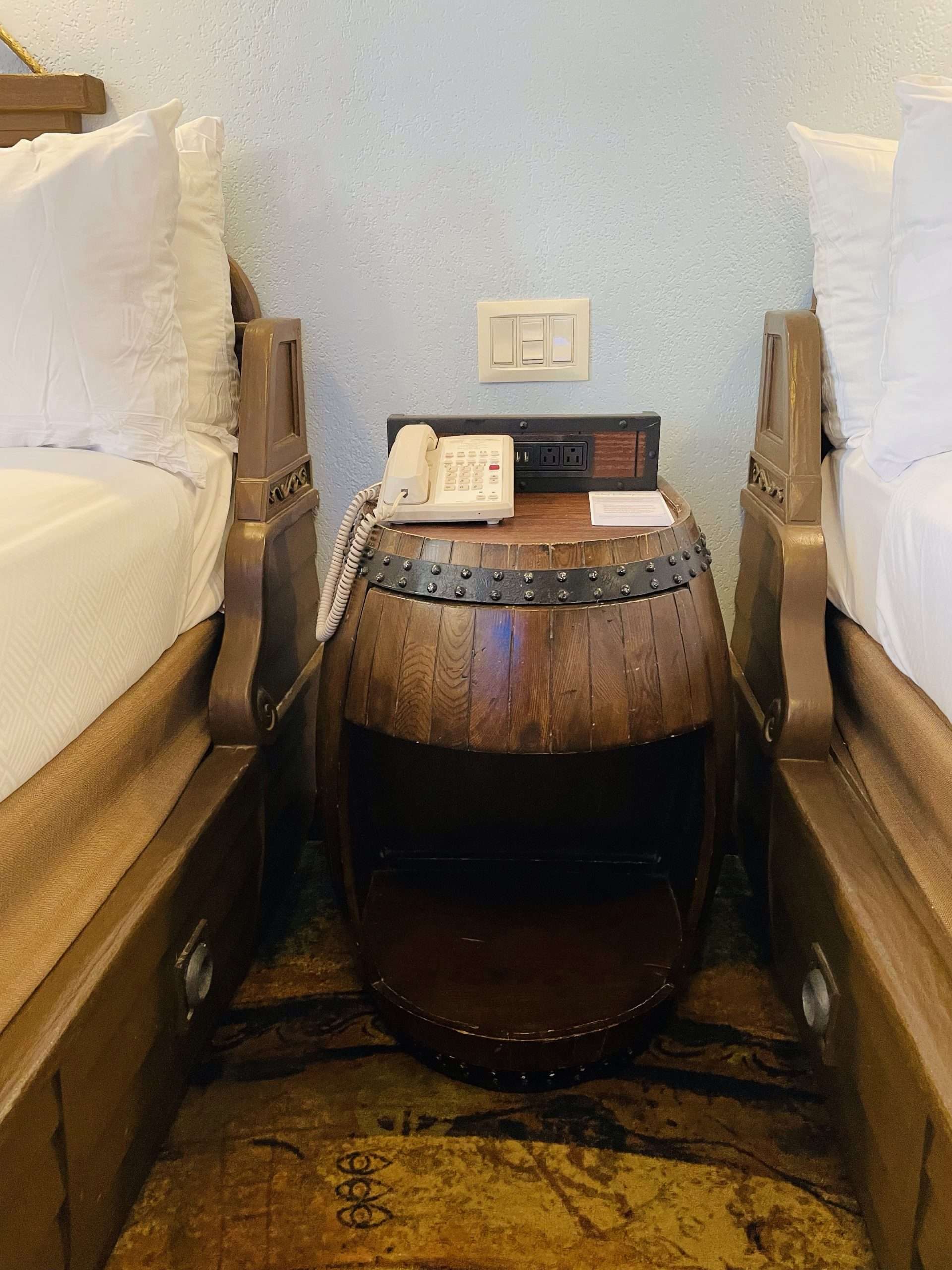 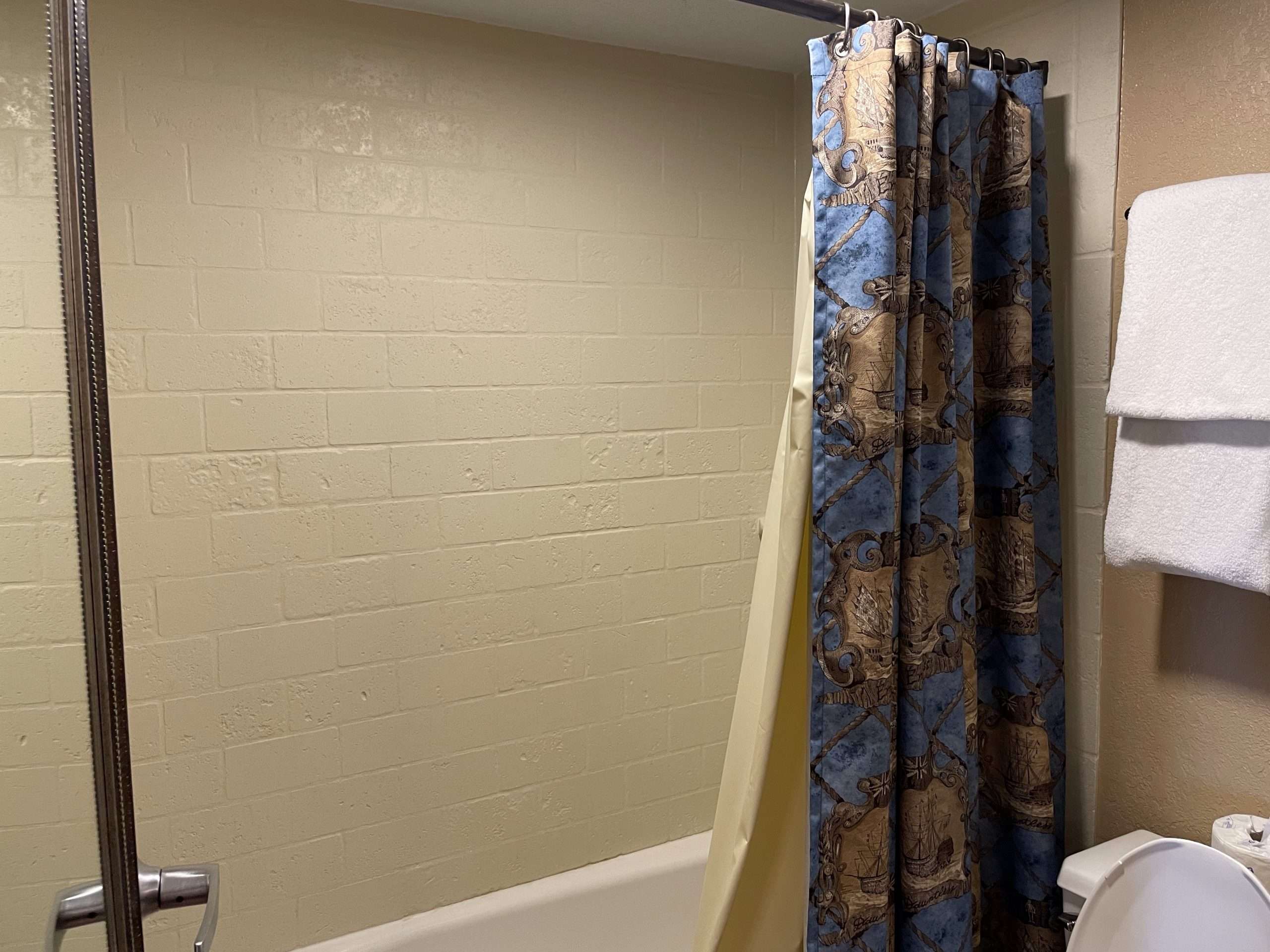 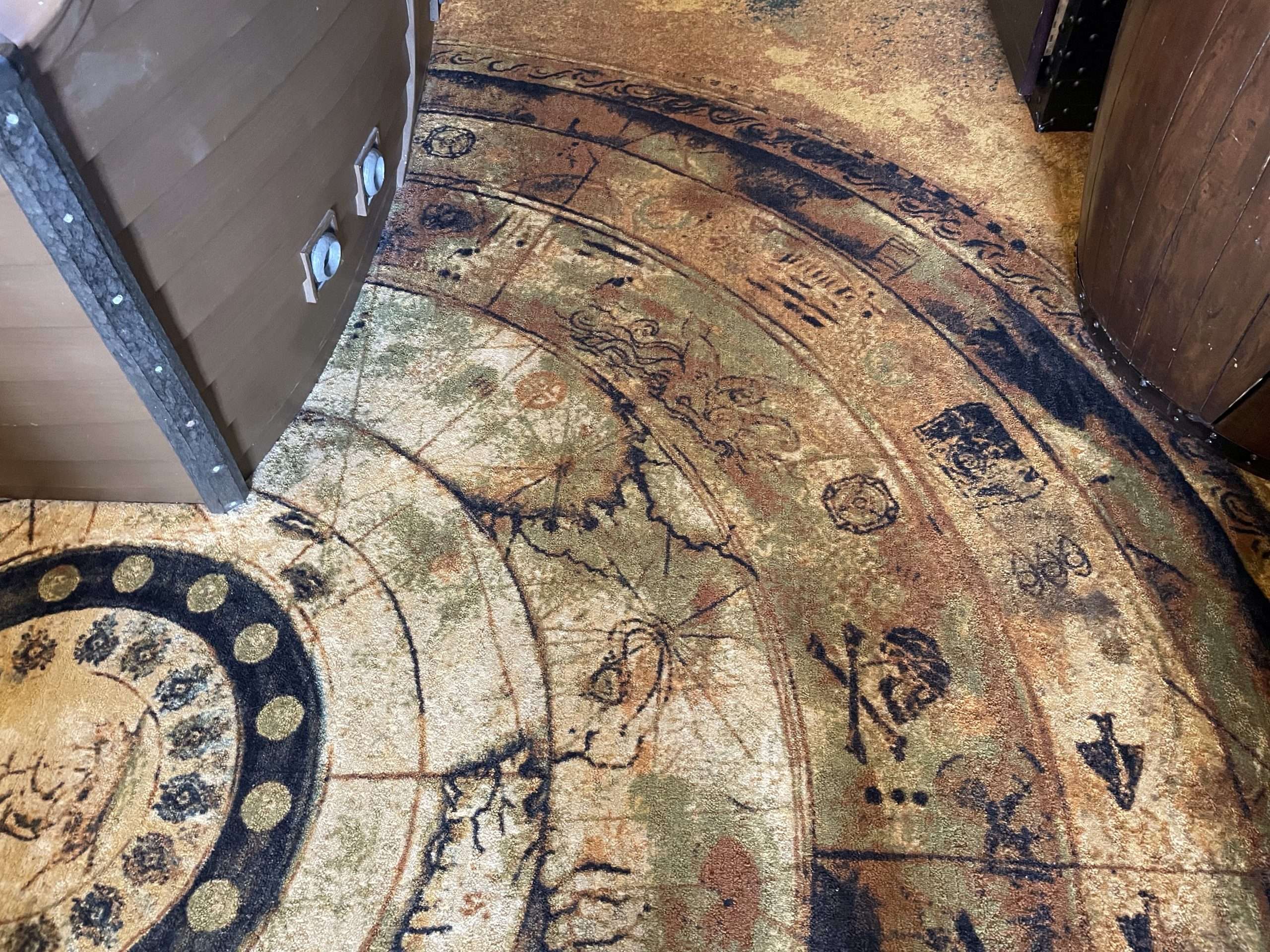 Yo ho, yo ho a pirate’s life for me! Well, maybe not. Pirate life doesn’t really sound much like anything that I’d be interested in; but we are huge Pirates of the Caribbean fans regardless of their lifestyle choices. So the Pirate rooms at Caribbean Beach sounded like a fun little addition to our Walt Disney World trip! And since we were spending a lot of time at EPCOT for the Flower and Garden Festival, we knew we wanted easy access to Disney’s Skyliner. We already know and love Disney’s Caribbean Beach Resort, so we thought we’d give the pirate rooms a try.  Who doesn’t love a good pirate theme?

Unfortunately, these rooms fell very flat for us. 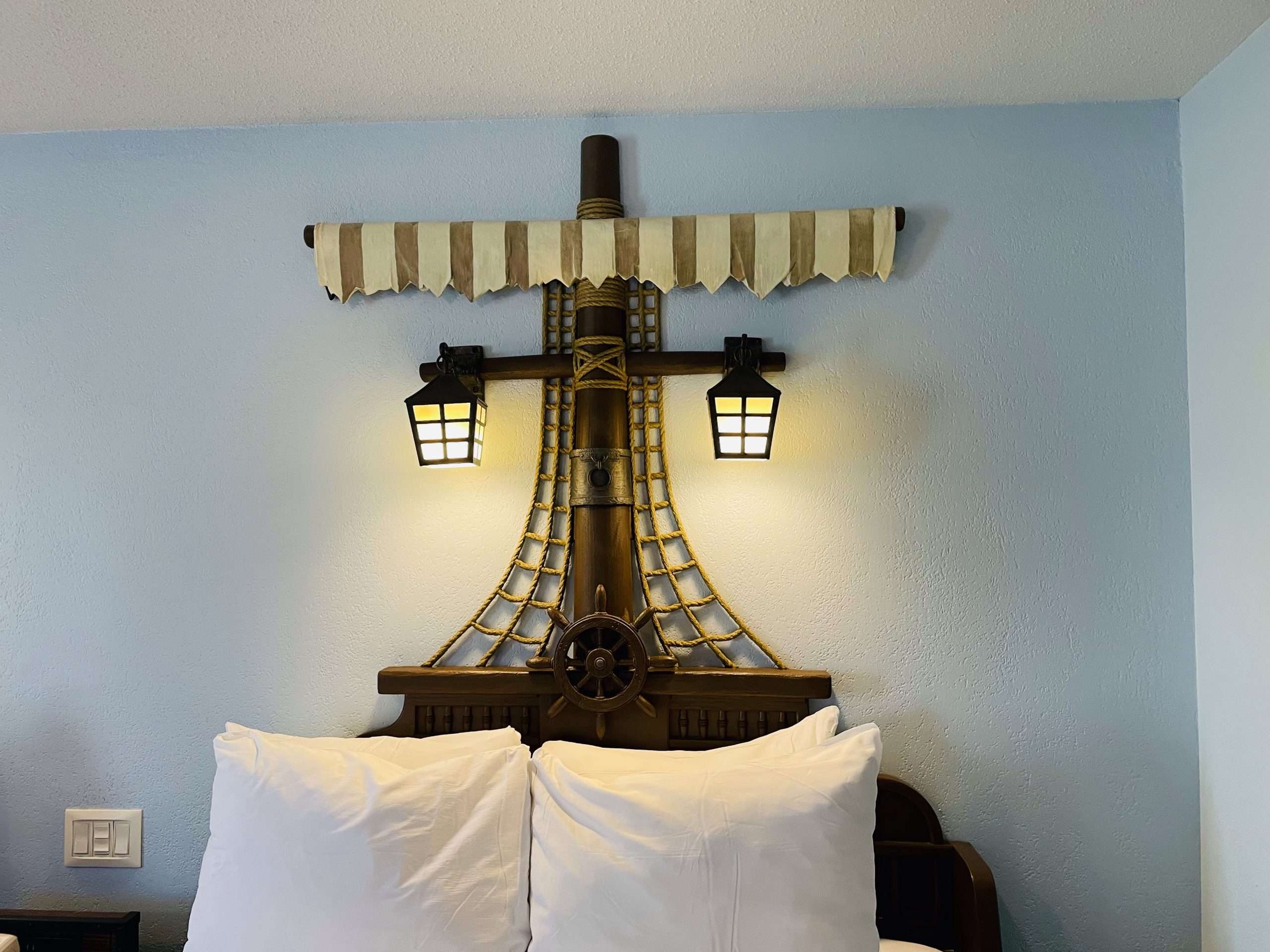 What are the Pirate Rooms at Caribbean Beach Resort?

The Pirate Rooms at Caribbean Beach Resort are standard rooms with a Pirate theme. With pirate ship bedframes, and pirate-y decor and furniture, these are specially themed rooms. They come with two double beds and can sleep up to four people. The Pirates Rooms are technically considered an upgrade at this resort. 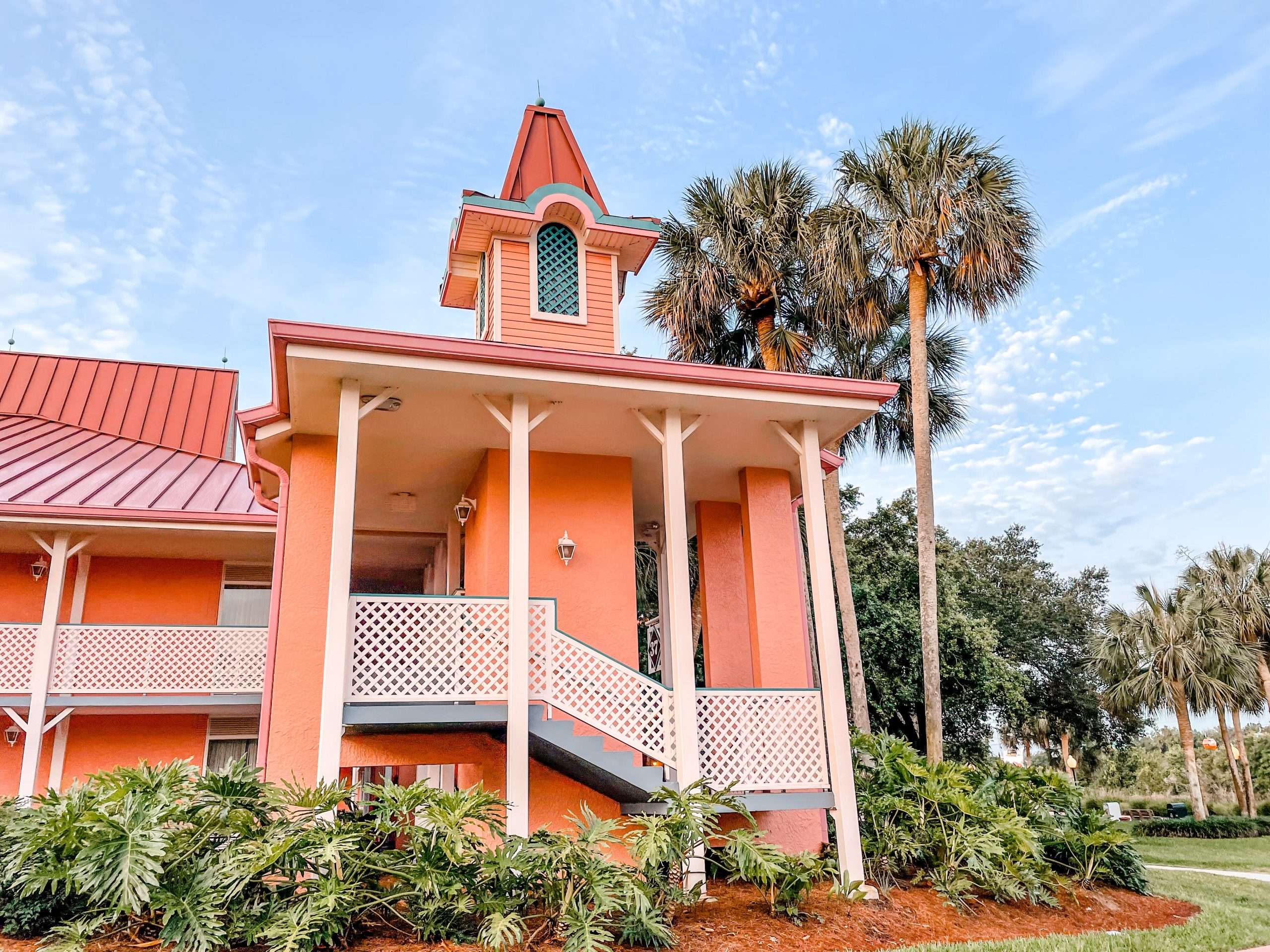 What buildings are the Pirate Rooms in at Caribbean Beach?

The Pirate Rooms at Disney’s Caribbean Beach are located in the Trinidad section of this resort.  Trinidad is the section furthest away from Port Royale at this resort. It’s actually across the street from the rest of the resort.  There are plenty of sidewalks and paved paths, so it is all easily accessible; however, it is important to know that they are quite far from the main building and pool. You can expect about a 15-minute walk to get you there. For some people, this won’t really matter, but it can make a big difference in your stay here so it’s worth noting.

They are also located across the water from the Skyliner station at Caribbean Beach, and you can expect about a 10ish minute walk to get there. 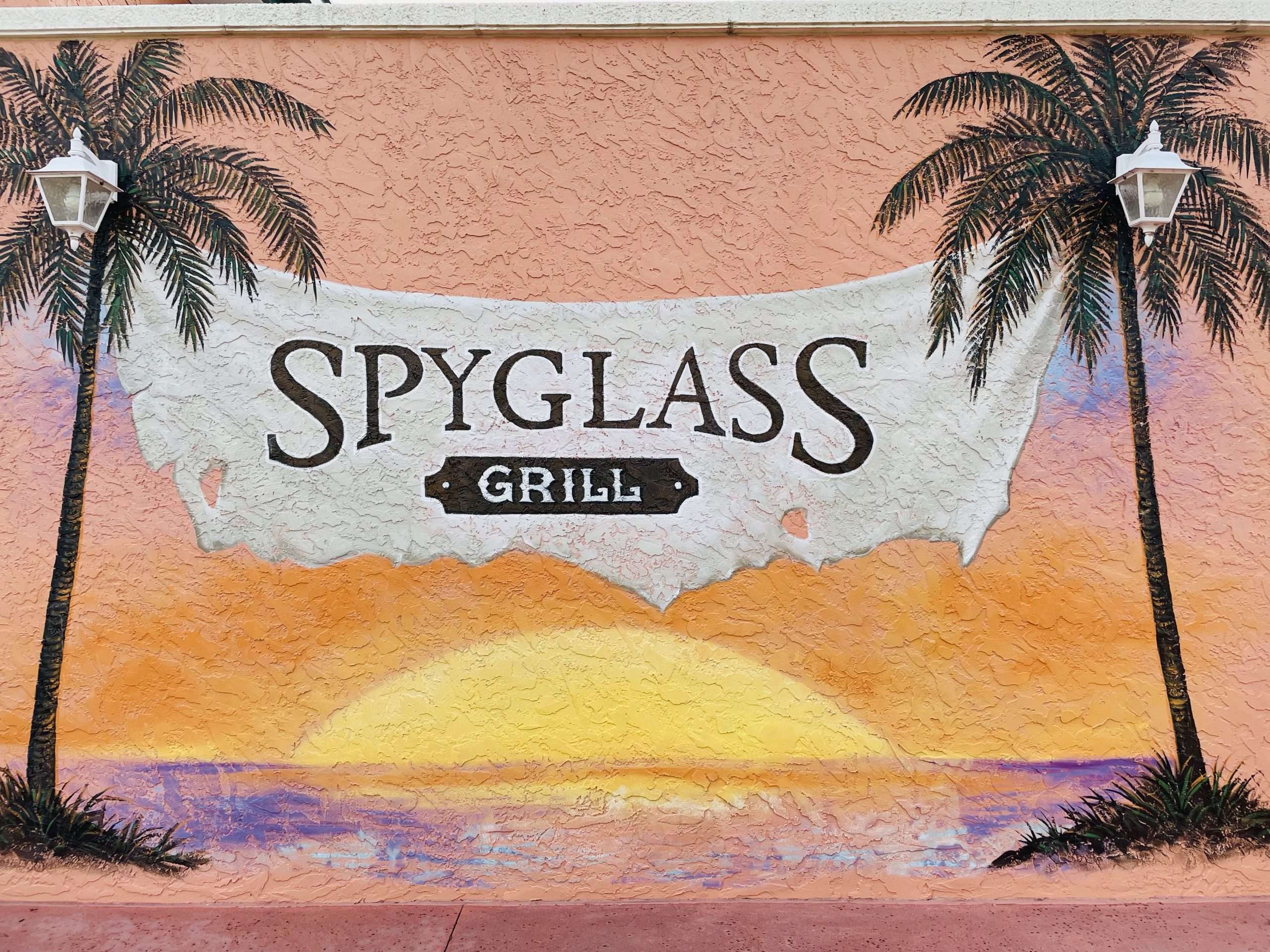 Dining near the Pirate Rooms at Walt Disney World

Even though the Pirate rooms are far from Port Royale, which houses the main food court, there are other options! Luckily, there is dining in the Trinidad section. Spyglass Grill, which we think is highly underrated, is a great place to grab meals or snacks, and you can refill your refillable mug if you have one.  They do offer mobile order, which is super helpful for mornings when you’re on the go; and they also have both inside and outside seating. The fountain drinks and coffee are available here from 7 am-11pm.

There is also a Coca-Cola Freestyle machine in this section. So if you’re in need of a beverage and Spyglass Grill is closed, or you’d rather not make the trek there, you can always access that machine instead. 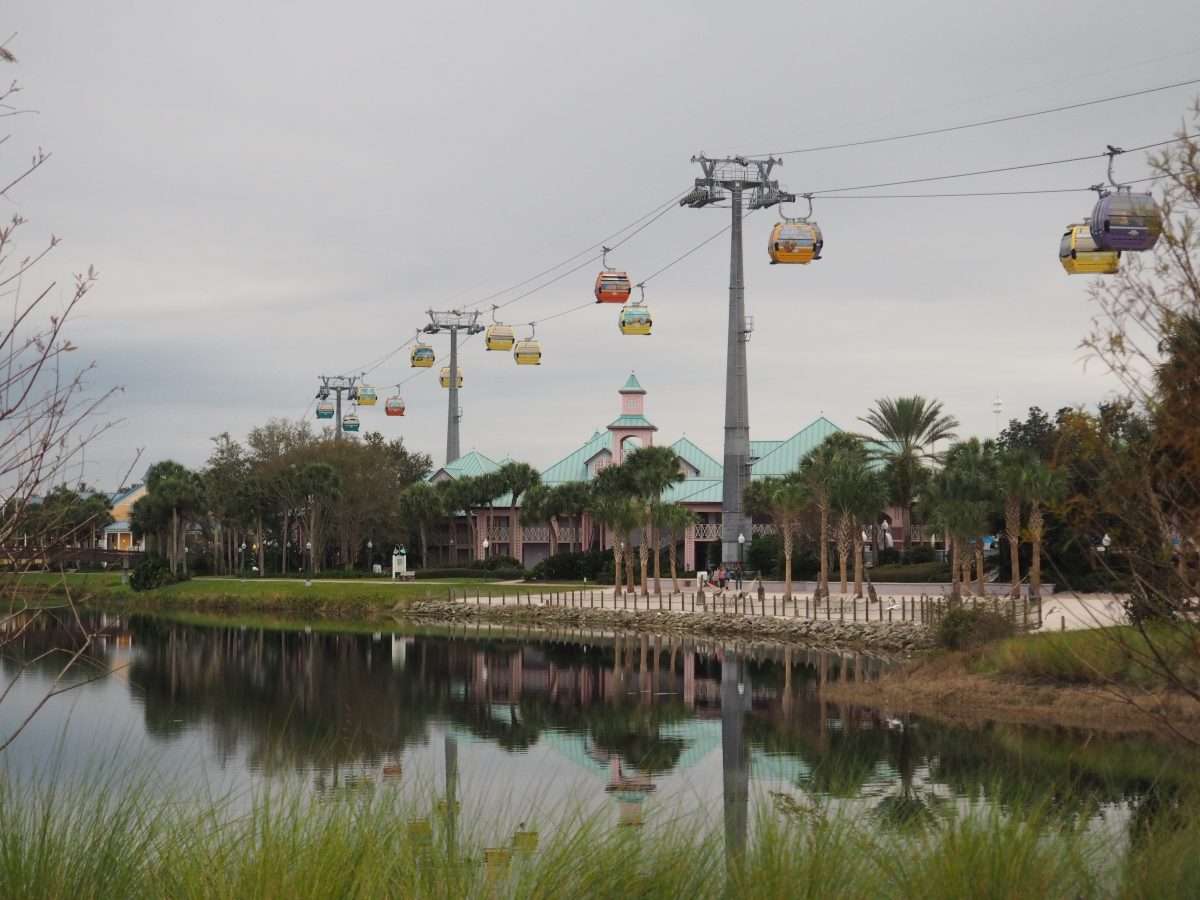 Transportation near the Pirate Rooms at Disney’s Caribbean Beach

Each island at Caribbean Beach has its own bus stop. We found that the bus stop here wasn’t terribly far from our room which was nice. But the busses at this resort are notorious for being some of the most crowded and for having some of the longest waits.  This is likely because the resort is just so massive, which means there are a lot of guests.  Busses are supposed to come every 20-30 minutes; but from much experience here in the past, you should try to accommodate for more of a 40-60 minute timeline.

This is currently the fourth stop on the bus line, out of six. This can change at any time, but that’s the current route. 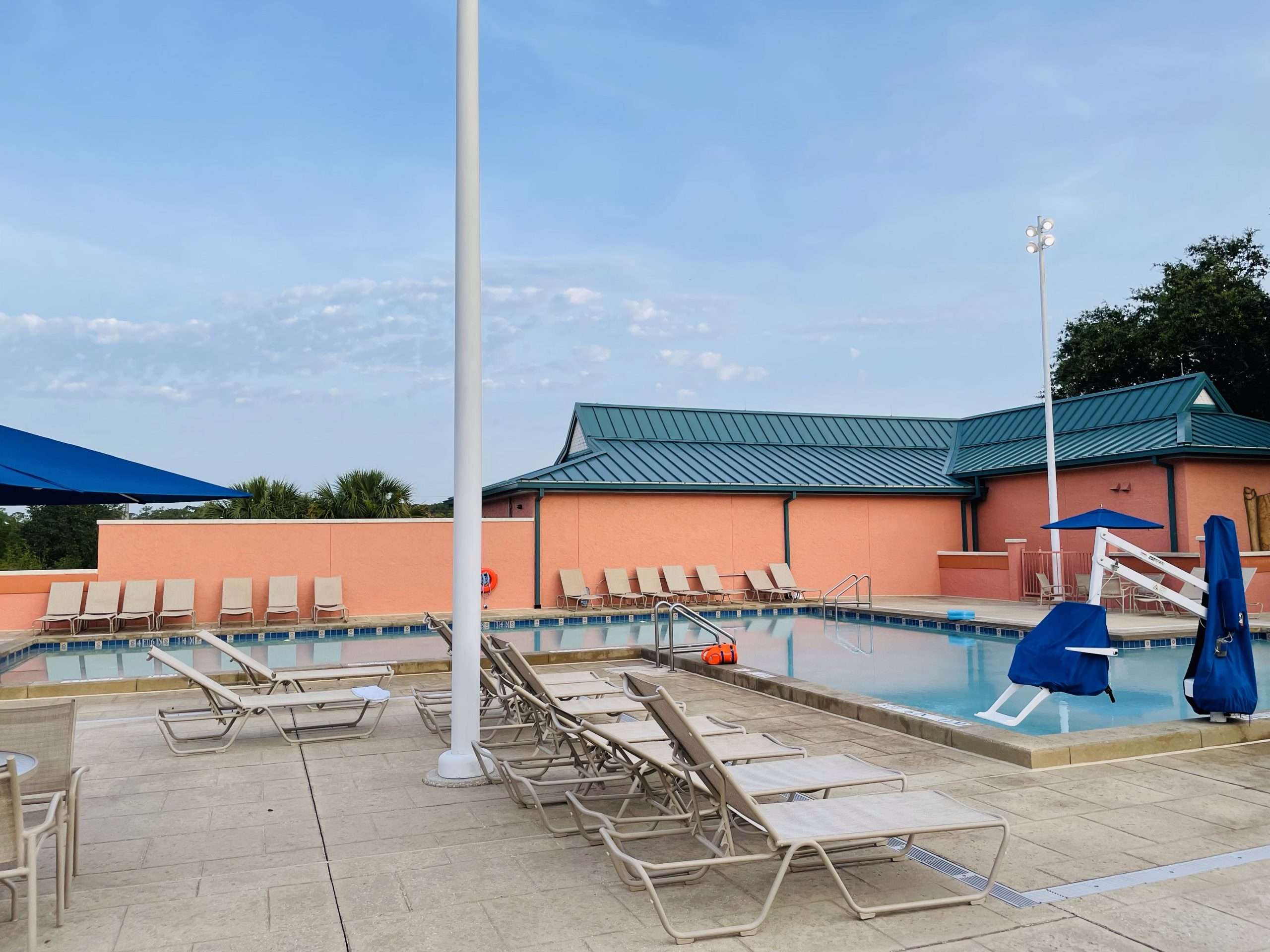 There is a quiet pool in each island section. So if you love spending time at the pool, there is a small one close to the Pirate Rooms.  It never seemed crowded, which is nice but it is also not themed. The main pool is located by Port Royale, so you’ll have to walk to the main building if you want to use that one instead. 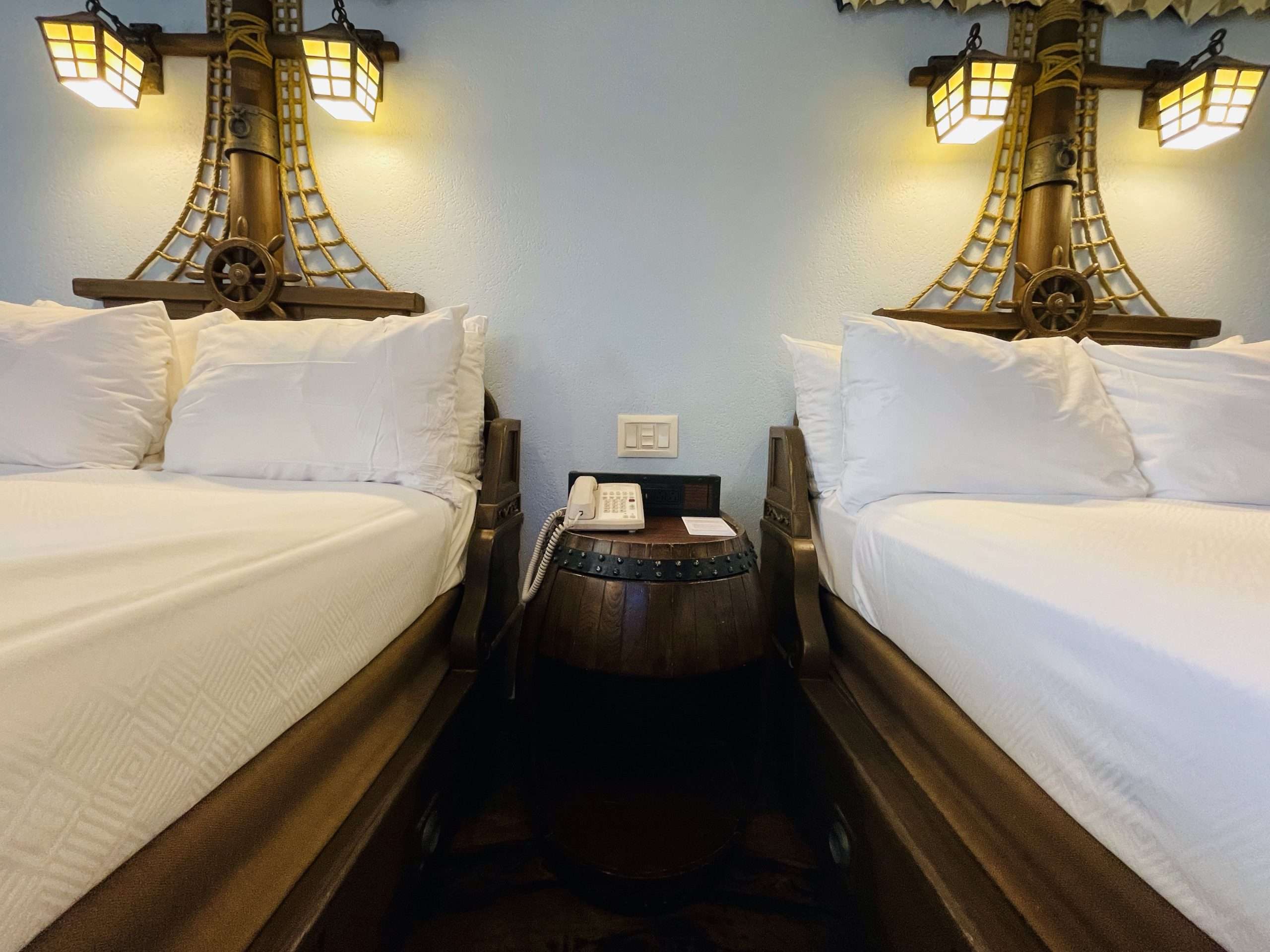 How much do the Pirate rooms at Caribbean Beach Resort cost?

As with all Disney resorts, the price of these rooms will vary by season and availability.  They are considered an “upgrade” at Caribbean Beach Resort though, so you can expect to pay more for them than you would a standard rate. At the time of writing this, rooms range from $349-$368 before discounts, and guests can choose from a standard view or a water view. A water view is slightly more expensive.

Basically, you can expect these rooms to run about $50 more per night on average than a regular room at the same resort. 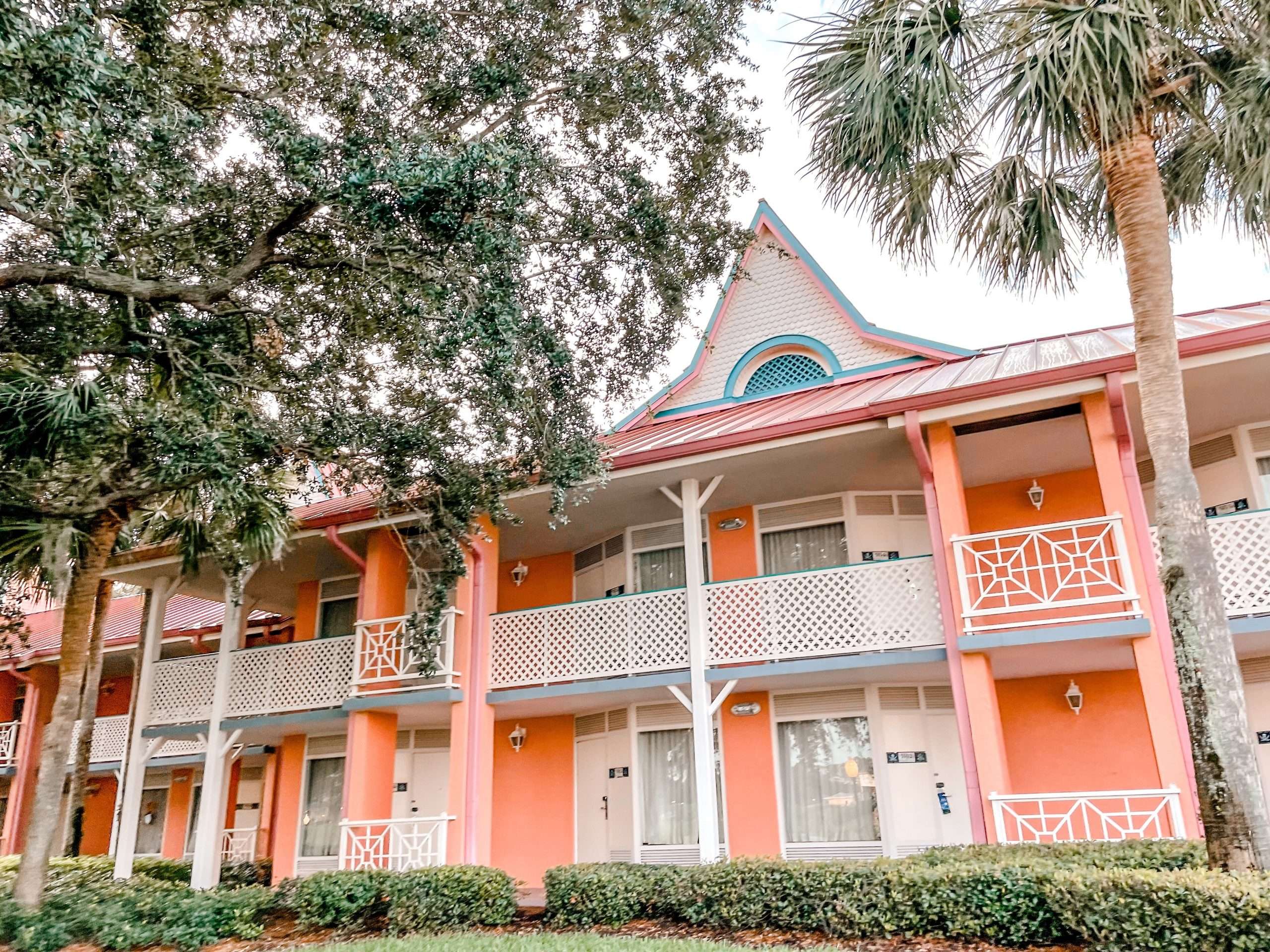 We really try to avoid words like “worst” and “best”.  Partly because we are indecisive. But also because they are very subjective words and we are very aware that someone’s best can often be someone else’s worst.  But in this case, we will allow it.

It’s important to know that these rooms are generally considered an “upgrade” at Caribbean Beach and will cost you more. This is honestly a little insulting once you actually stay there.  Not only have the rooms not been refurbished like the rest of the resort, but the theming of these rooms brings about a lot of issues in itself. Due to the pirate bed frame, the beds here are only double beds. And unless you’re a single person, or are used to itty bitty living space, a double bed is pretty small. It might be ok for two small children, but two adults may have a hard time sharing this bed.

Even the rooms at the Value Resorts have queen beds, so we really think this is a downgrade.  Furthermore, the actual beds are pretty uncomfortable.  It was the first time I have actually had a difficult time sleeping at Walt Disney World.

Why we don’t recommend the Pirate Rooms

In addition to the pirate bed frames, there is furniture designed to look like trunks, boxes, and barrels, all of which act to serve a function. But they each severely under perfom that function. A barrel is a super cute idea for a nightstand until you realize that you can’t actually fit more than one cell phone on it. And since they’re so bulky, there’s only one. Which means only one of you can actually charge your phone at night.  The stacked boxes are a cute way to present drawers until you realize there’s almost no drawer space. Every single piece of furniture in this room takes up way more space than it would if it were not themed, while also providing less counter or storage space than traditional furniture.

If the lack of storage space isn’t enough to drive you crazy, maybe the room atmosphere will. You should also know these rooms have never actually been part of a real resort refurb. They’re very outdated in appearance. And have only had “soft refurbishments”; which means that only things like linens and carpeting have been upgraded. The air conditioner was extremely loud and very difficult to get to work properly. The vanity area is still separated from the rest of the room by a shower curtain.  And there are hardly any outlets or USB ports. The lighting is very dim and the whole aesthetic of the room is dull.  And if that wasn’t enough, the WiFi is terrible.  We think it’s because it’s just so far from everything. But it’s probably the worst WiFI we’ve experienced at Walt Disney World.  Maybe Disney wants you to know how bad it would be to live on an actual pirate ship? 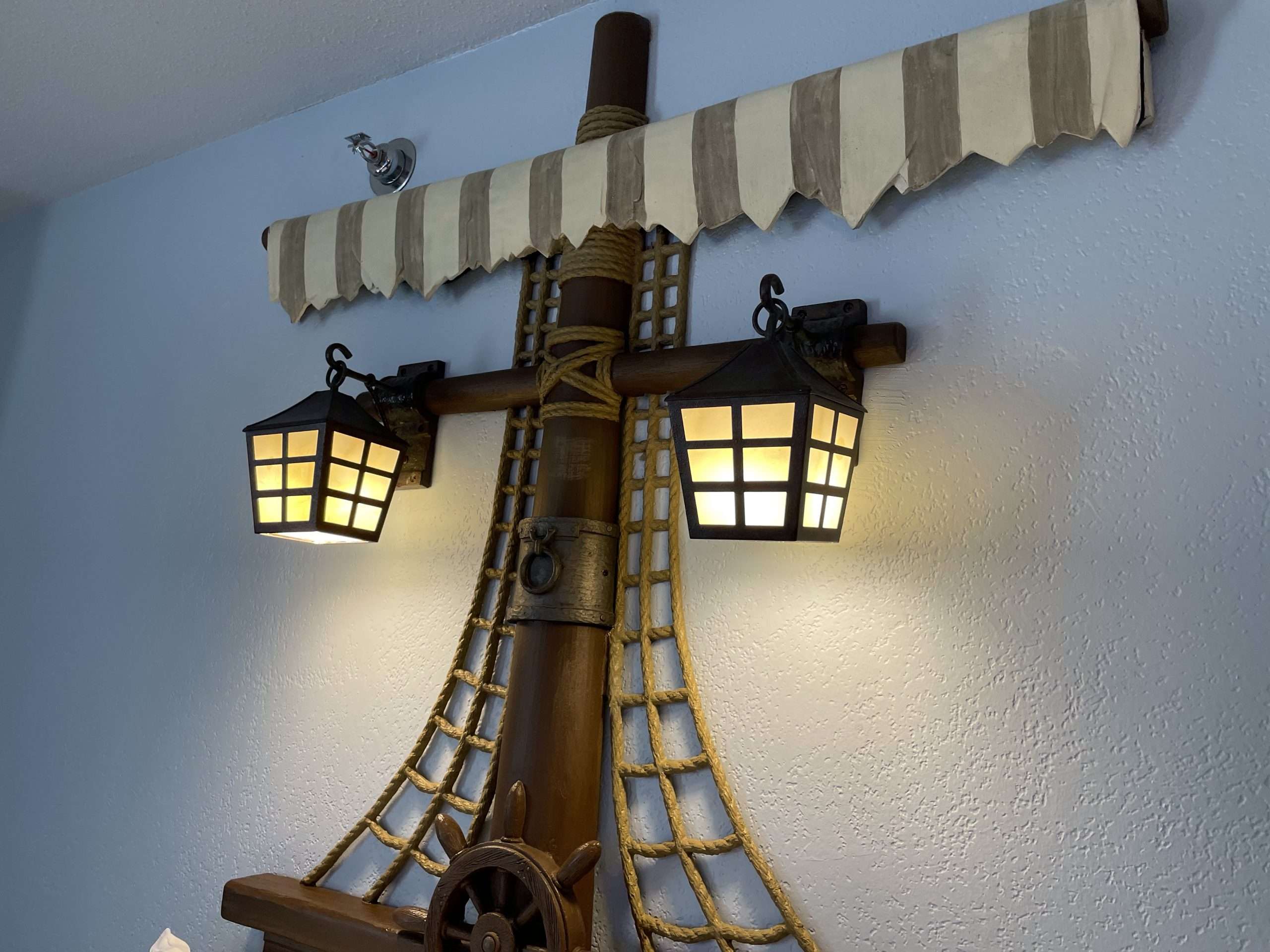 Are the Pirate Rooms at Caribbean Beach Worth it?

There are many times we are asked if something is worth it, and usually, the answer is, it depends. This is because there are so many things that can account for value and worth, and that varies from person to person. In this case, though, we strongly stand by this. The Pirate rooms at Caribbean Beach are not worth it. There are other themed rooms at Walt Disney World that are usually the same price, or even less than these that are much better.  Add in the distance to the main pool, and the main building, and overall, these rooms are a disaster. And they’ll cost you more than the rest of the resort.  Even when they are on sale.

And if you don’t need a themed room, and can’t find something available at CBR, the rooms at Pop Century are much better and still have access to the Skyliner.

Even if you have a die-hard pirate fan who really wants to do something pirate-y for your Walt Disney World vacation, we still wouldn’t recommend these rooms. Instead, book a regular room and use those savings on a special experience, like a Pirate cruise or a fun pirate outfit they can wear.

Are the Pirate Rooms at Caribbean Beach available for 2023?

Actually no! On the most recent travel agent call on June 8, Walt Disney World announced that the Pirate rooms would be discontinued for 2023. There is no official news as to when exactly these will no longer be offered, or if a refurbishment will be taking its place. All we know for sure is that no new themed rooms will be replacing them.

Maybe Walt Disney World finally realized these rooms are really as a bad as we think they are.

There are so many better rooms at Walt Disney World. Especially now that all of the Value Resorts have been refurbished, we just don’t think you should waste your money here. We know some will say sleeping in a pirate ship is pretty cool; and we agree, yes it is. But for the money, you can find better, more comfortable accommodations elsewhere.  Have you stayed in these rooms before? We’d love to know if you loved them or if you loathed them as much as we did! 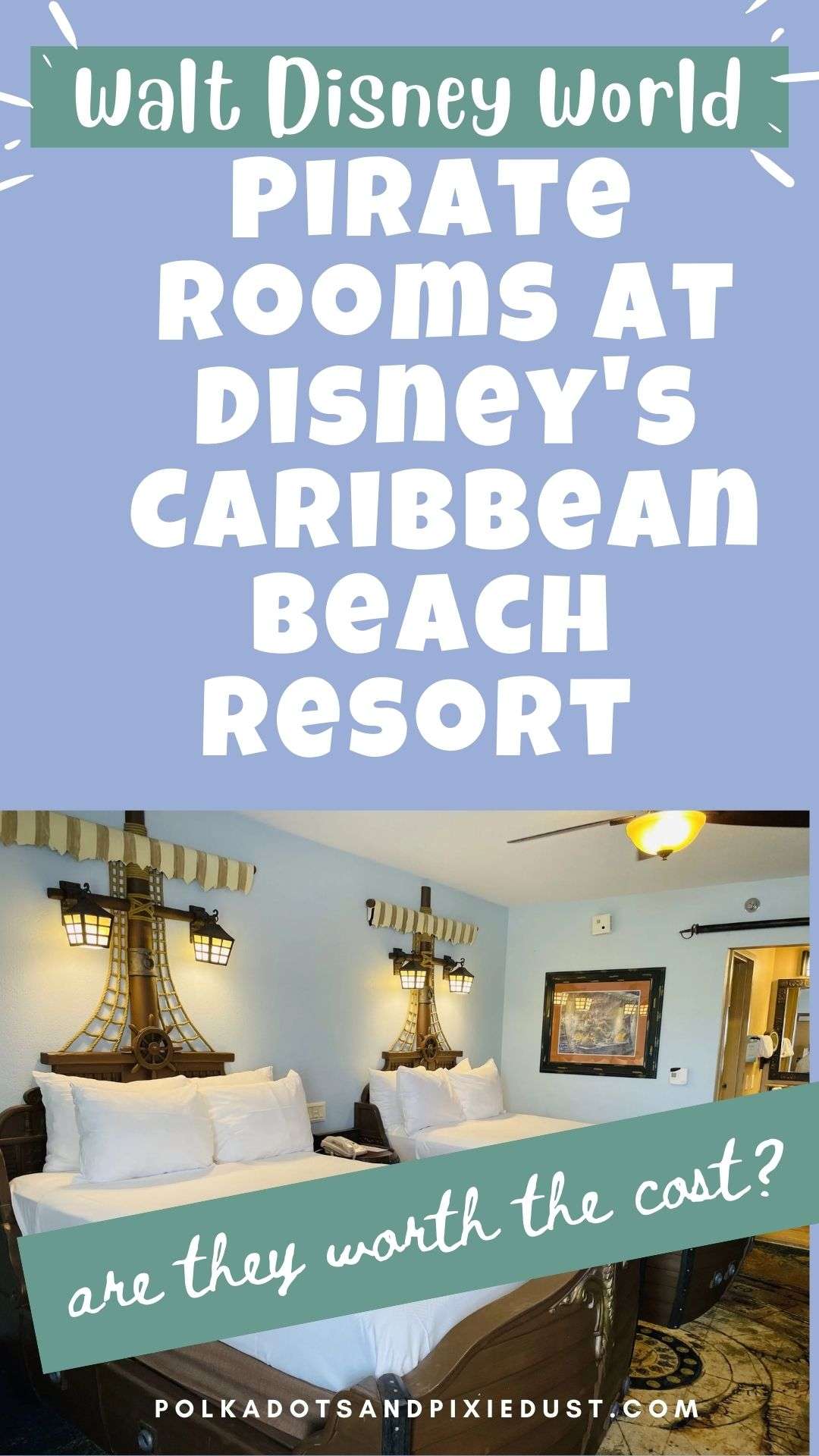