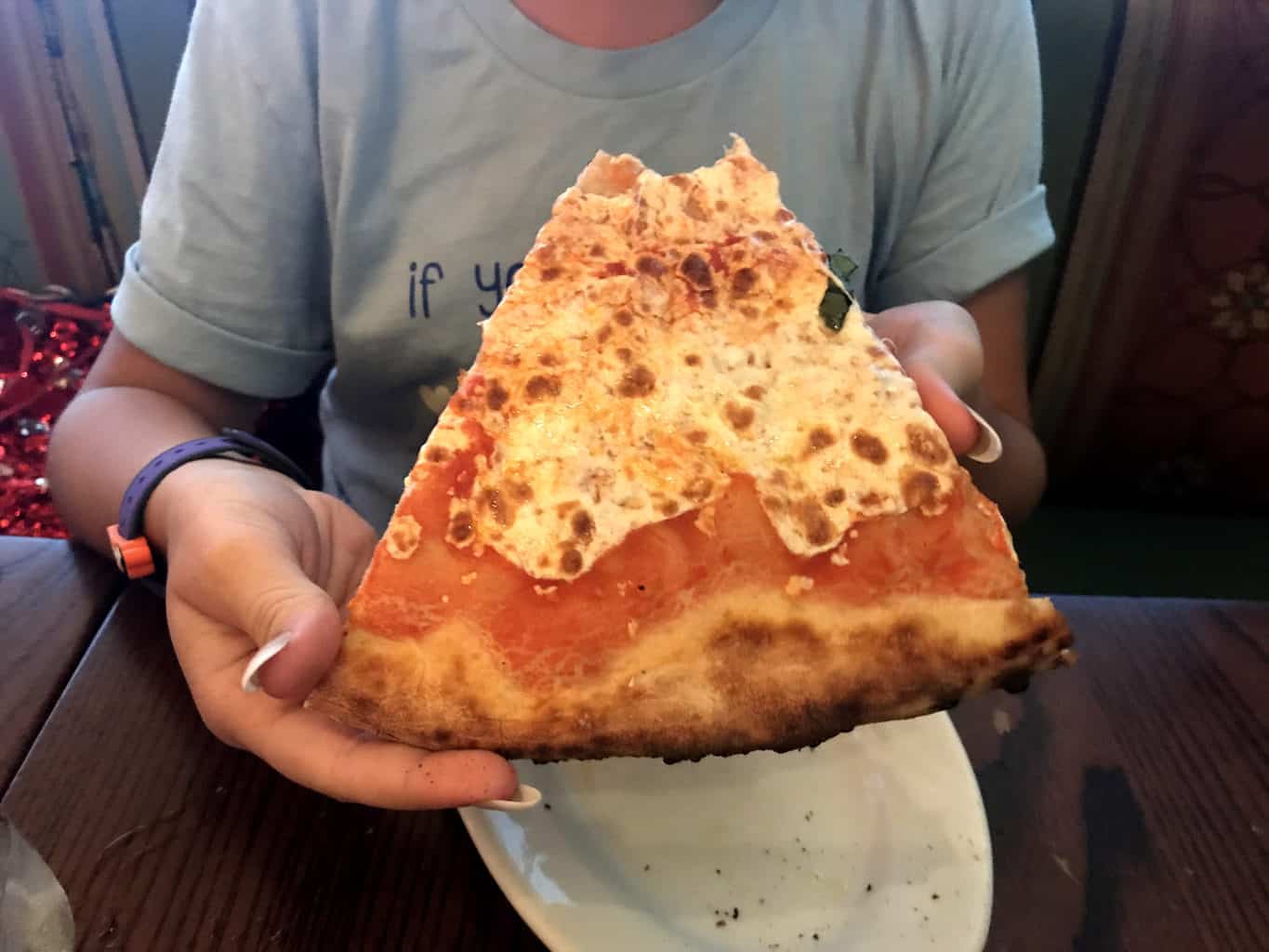 Finding pizza at Walt Disney World, when you’re really craving some good pizza should be as easy as it sounds, but it isn’t.  See, whenever we go to Disney, even with all of our planning and spot-on restaurant reservations, fast passes and plans there always seems to be one evening during our trip where we become completely unable to just keep going. Decision making skills are gone. Tolerance levels are at zero and we don’t want to have to wait another 45 minutes before finally eating dinner at 10 pm. Chances are you know the feeling. Now, Walt Disney World does have quite a few options for pizza, but they are not all tasty and not all easily found! And frankly, some of them aren’t really even pizza! So where can you get pizza pretty fast at Walt Disney World?

So here’s the thing to keep in mind on your pizza journey…not all pizzas at Disney are equal. They are not anywhere near the same size, price or quality. We’ve spent 9 dollars on a 16″ pizza able to feed 4 and 24 dollars on a 6″ pizza able to feed one. So beware. Since pizza isn’t something we have regularly we really do try to make it special when we finally get the chance. So when we find pizza at Disney we do we expect it to be top notch!

Where to find Pizza at Walt Disney World

To make things easy, we’re just going to give you a go-to list of places in each Disney Park. Key here is that you don’t have to wait too long for it.  Don’t have to pay too much for it. And that it will satisfy your pizza craving.

Magic Kingdom is horribly lacking in pizza options. If you can feel a pizza craving coming, try not to be in this park when that happens. If you’re OK with waiting for it, Tony’s Town Square Restaurant has pizza that’s not half bad. But even then, we’d rather just leave the park and find a better pie.

Pinocchio’s Village Haus: Flatbread style pizza, single serve. The only quick serve pizza option in Magic Kingdom. And only if you’re starving. This “pizza” aka flatbread, is pretty basic and not really one we would have put on our pizza bucket list. The crust is thinner, the basil and cheese minimal… but again if you’re really really hungry, it may hit the spot. 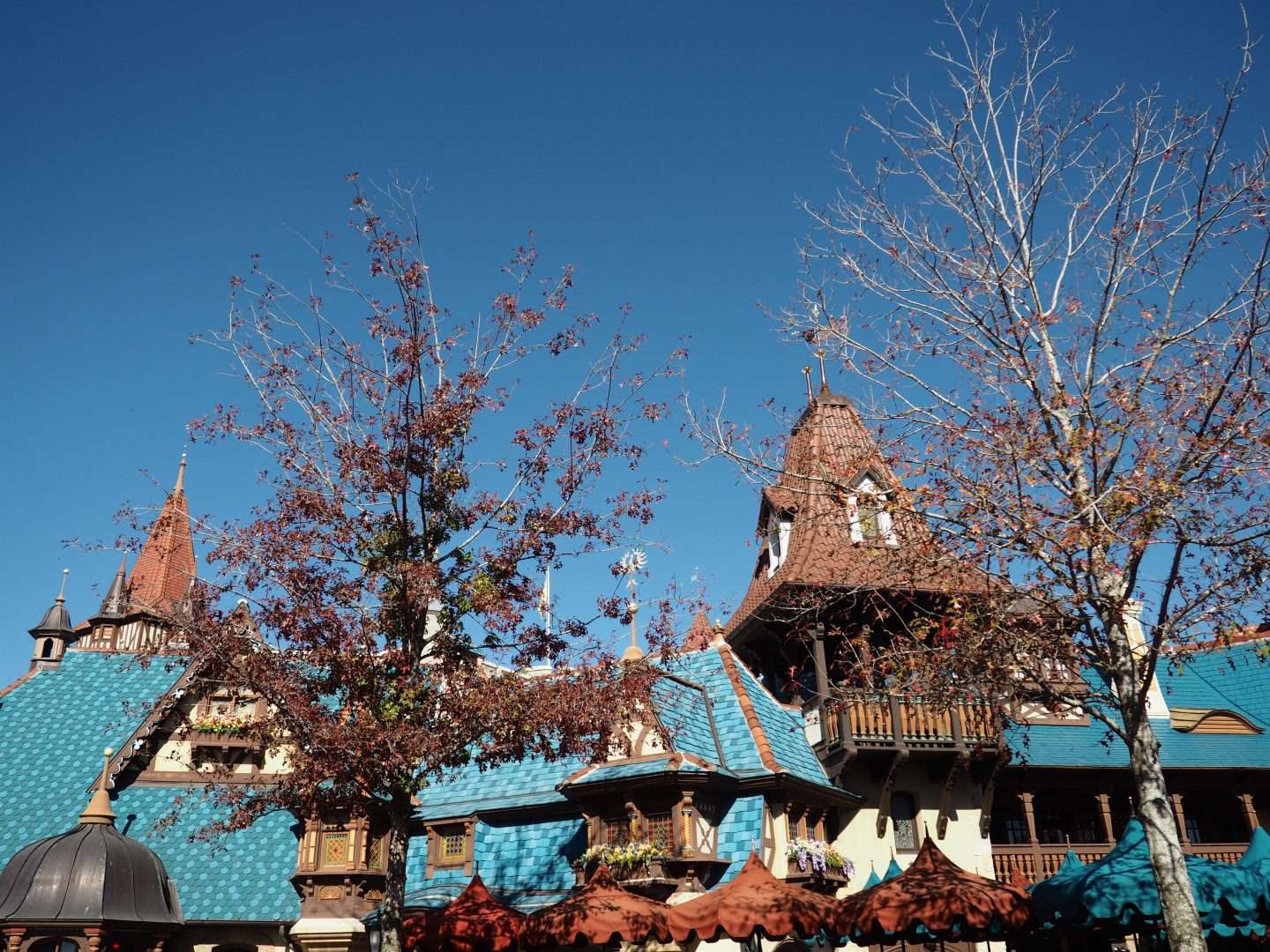 Another park with limited options is Hollywood Studios. Chances are they’ll introduce pizza on the menu at the new Star Wars restaurant, right? Not yet. Until then it’s Catalina Eddies, Mama Melrose’s Italian Restaurant and PizzeRizzo.

PizzeRizzo: The dive bar of pizza joints, PizzeRizzo is trying to channel some New York City Muppets inspired love with basic pizza. No doubt previously frozen. A great place to bring lots of people last minute for food you’ll forget by morning. But, hey, at least you’ll eat without having to wait. 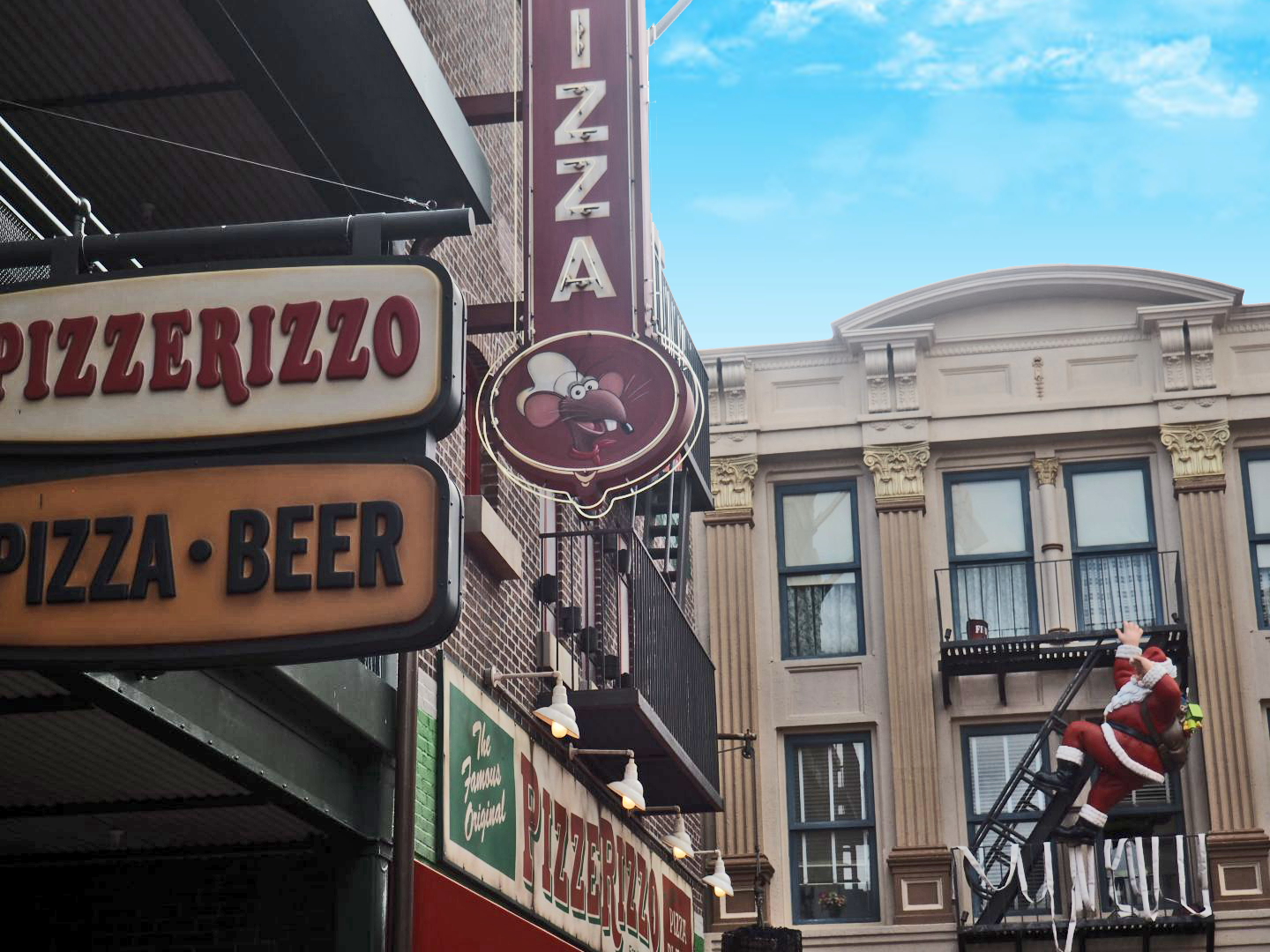 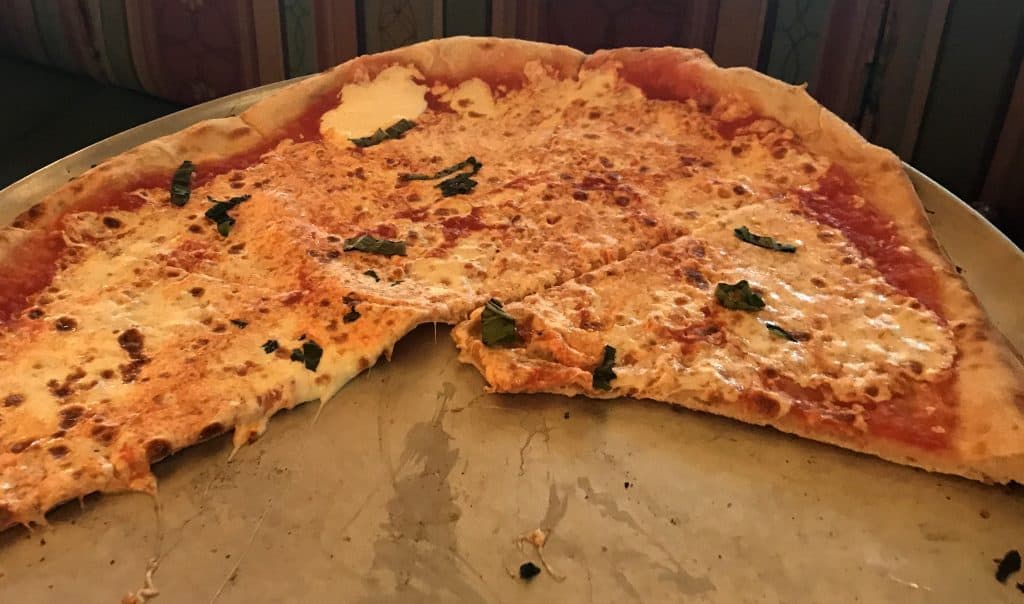 Don’t even bother going anywhere else in Epcot for pizza. While you can find flatbreads at Sunshine Seasons and Electric Umbrella, if you want pizza just to go to Italy.

Via Napoli Pizzeria e Ristoriante  and Pizza al Taglio Pizza Window: This is, by all accounts we’ve found, considered the best pizza on property. A fancy pizza option, there are several variations to choose from but these can get pricey. You will however get a pretty large pizza, with a thinner crust, but at least a lot of flavor. If prepared to wait for your pizza in the restaurant, know that all additions, like a salad, or garlic bread starter will cost extra. Nothing comes with the pizza on it’s own. This is, however, from what we’ve tried actually really good. Via Napoli also has a pizza window called Pizza al Taglio that allows you to get one slice of pretty big pizza. Or the whole pie if you’re looking to grab and go. This is the new darling of Epcot. Great pizza, at a good size to share if needed, this will be your answer to fast pizza in the parks. 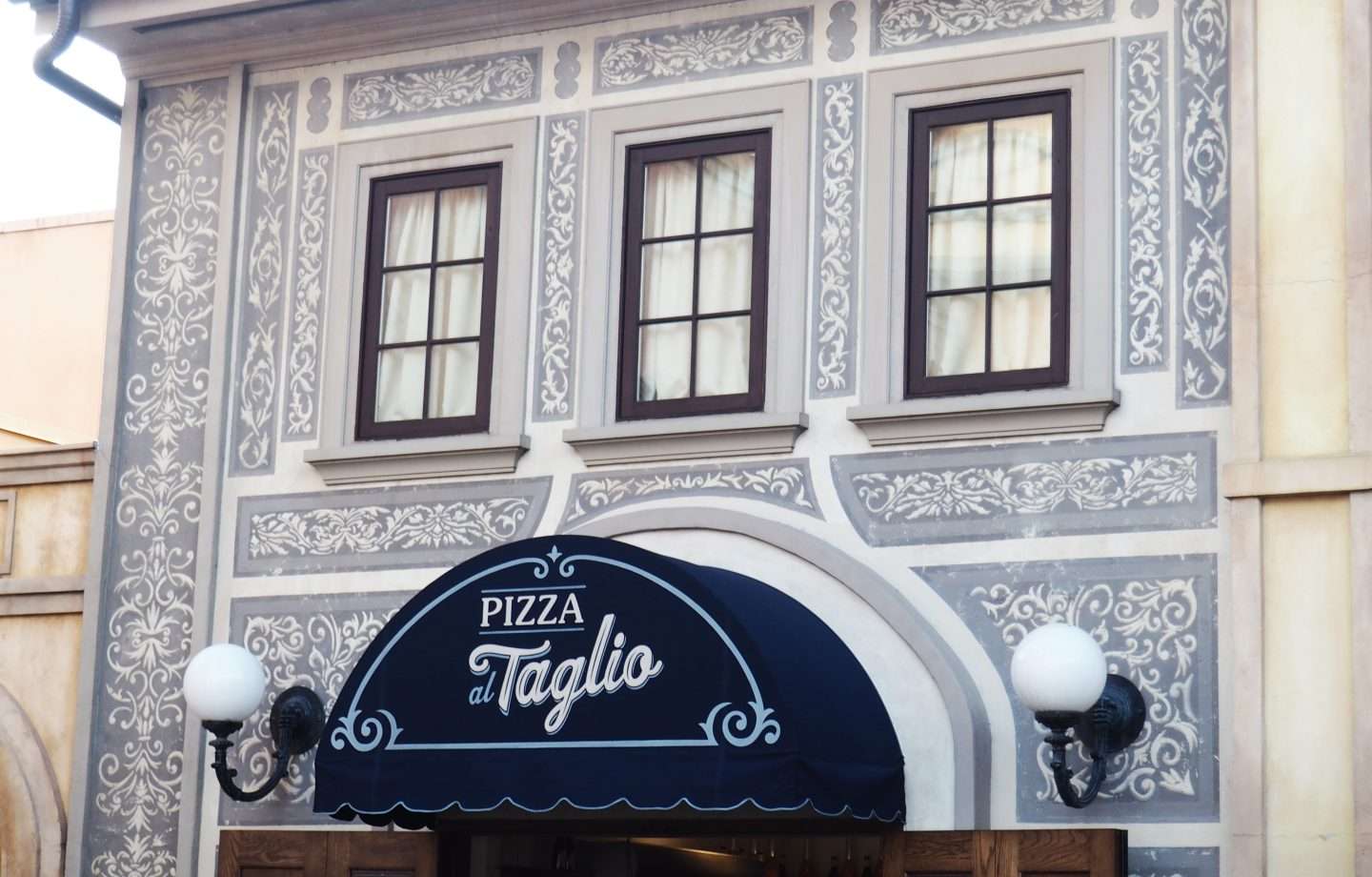 Pizza at The Disney Boardwalk

Trattoria al Forno Pizza Window: The allure of the pizza window is speed. In classic fast food style, you’ll get your food pretty quickly. This is typically a 20 dollar cheese or pepperoni pizza. Pretty basic, but decent as a last-minute meal option if you’re not heading over to Epcot. And equals a standard Large pizza size you’re familiar with.

Trattoria al Forno Restaurant: Ok, so while we won’t give this pizza the scathing review we’ve seen on other sites, we’ll try to tell it like it is. This pizza had all the promise of a really fancy specialty pizza. At 24 dollars we expected this to adequately feed all three of us. In truth, while we did suck it up and just have this for our dinner that evening. BUT, there was by no means enough food at that table. The wood-fired pizza is about 8 inches at the largest and you’ll get 6 pieces, small in size. This was super disappointing, because we had been in line for the pizza window- where we would have gotten a 16″ pizza for 20 dollars, which hadn’t been half bad last time we had it. We did however want to sit inside since it was chilly out. Lesson learned. A fairly bland pizza, thank goodness we had olive oil at the table to give it a little flavor! The breakfast at Trattoria al Forno on the other hand is to die for! 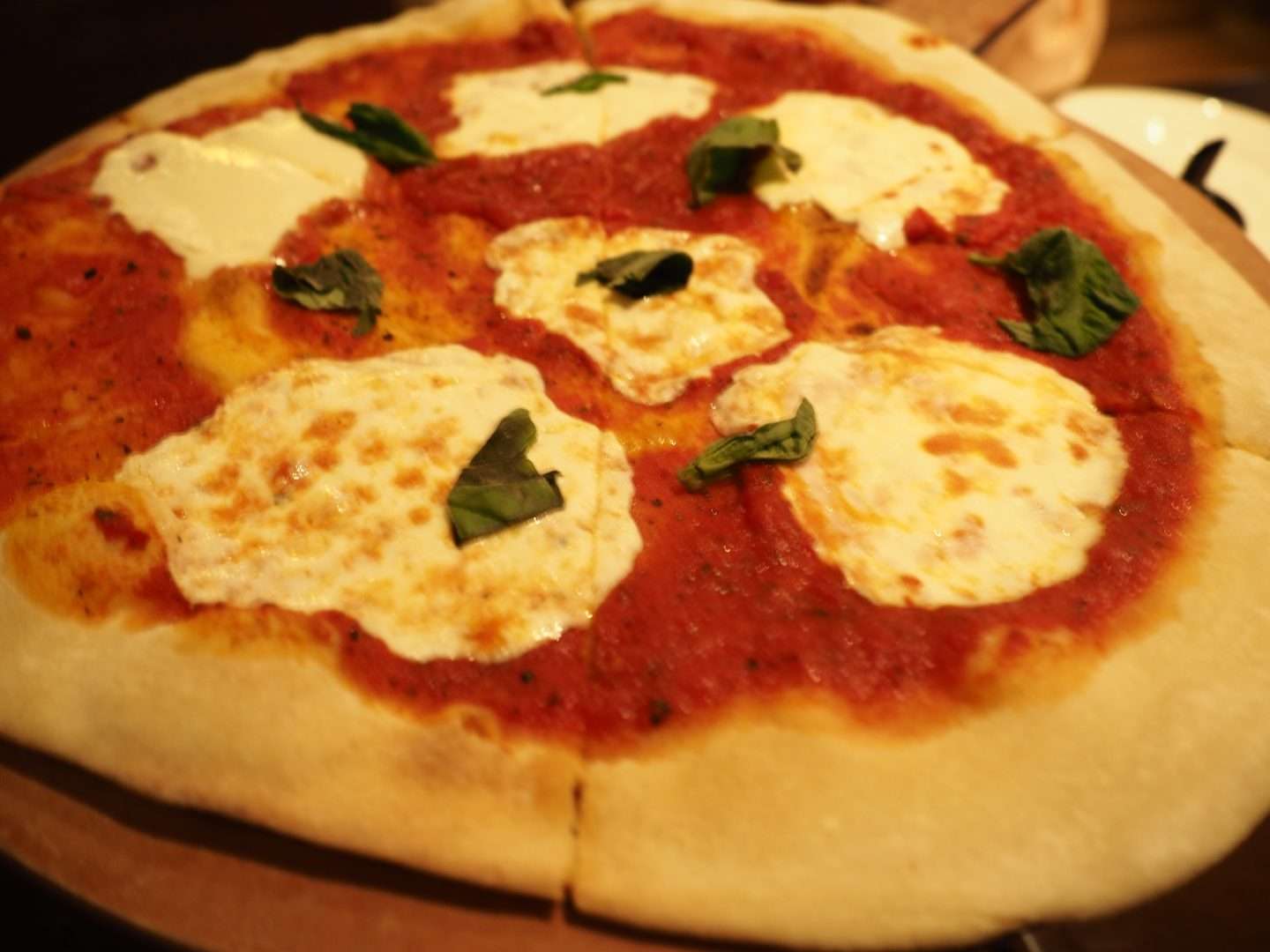 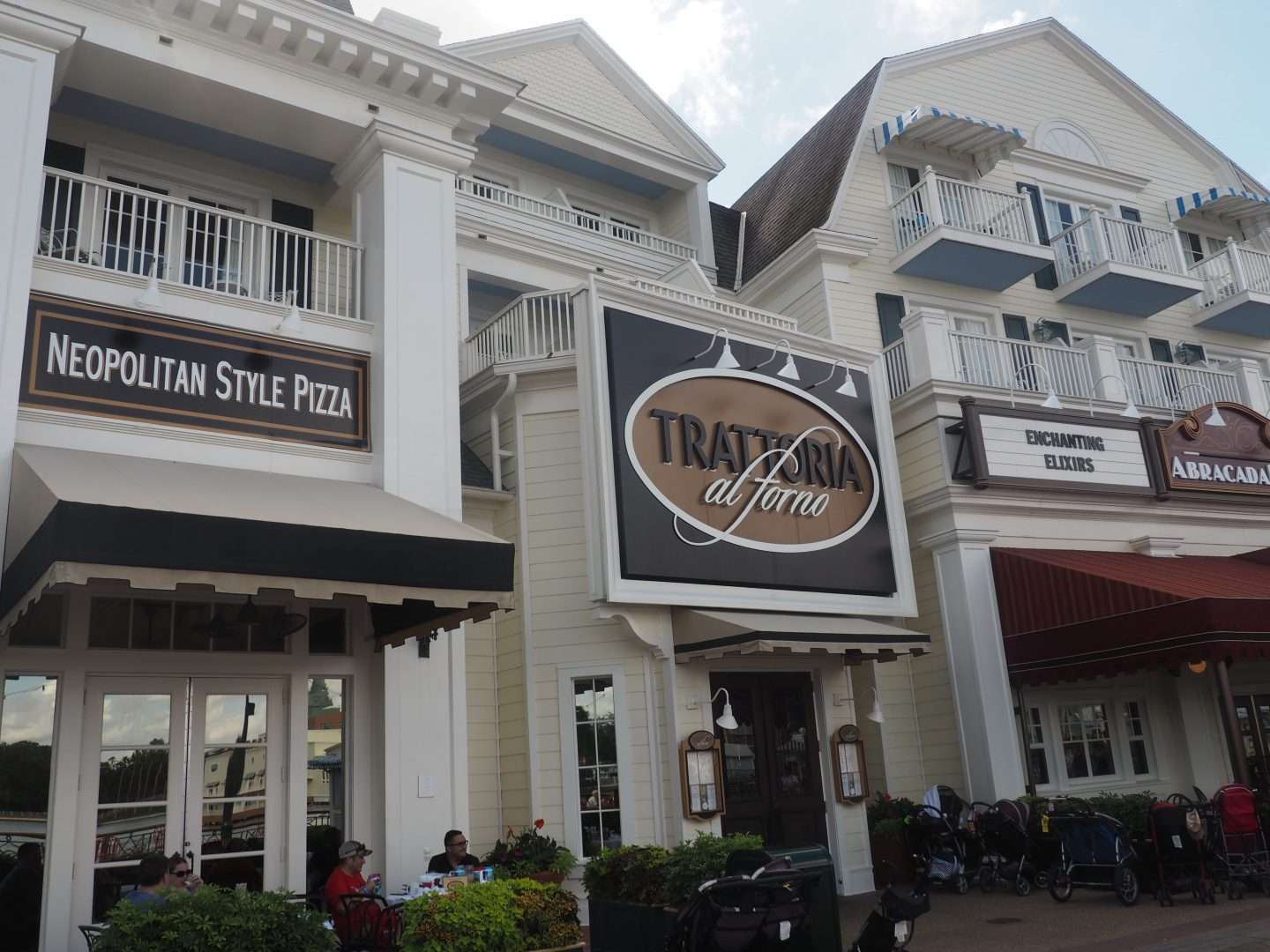 Ah yes, another park with hardly any pizza! Do you see what we mean about trying to find pizza at Disney?

Pizzafari: Another flatbread pizza, Animal Kingdom spruces it up with a shrimp or cheeseburger option. Pretty basic and probably the same pizzas available at any resort commissary. Animal Kingdom is known for it’s interesting food options, so if you need something for the picky eaters you can stop at Pizzafari.

Pizza at the Walt Disney World Resorts In A Rush

Room Service Take Out Menu Pizza: Consider this the Papa Johns or Pizza Hut of the Disney pizza universe. Completely adequate and of generally normal size for a late night meal back at the resort, if you missed dinner. Pretty good pizza, it is a little greasy as most delivery food is, but again- when you’re hungry anything will do. Delivery will take about 45 minutes to get your room. The pizza will be about 26 dollars and your tip is included in that bill. You can pay the delivery person extra, but know they are already compensated for the trip out.

Contempo Cafe at The Contemporary Resort: Probably from the same vendor as Pinocchio Village Haus, and Pizzafari, the pizza at Contempo Cafe spruces things up by having a buffalo chicken flatbread. Pretty good with a little heat. No real fanciness or customizations here, but pretty decent theme park food otherwise.

Pizza at All the Other Disney Resorts: All the Disney resorts have commissaries that offer some variation on pizza, whether its a personal pan or a flatbread. These are your basic pizzas potentially frozen and coming out of a box. Proceed at your own risk. Now, if you’re venturing to Jiko at Animal Kingdom Lodge or California Grill at The Contemporary then you’re in for a treat. Mind you… getting your hands on these pizzas will require reservations, and waiting and probably have a hefty price tag to boot. 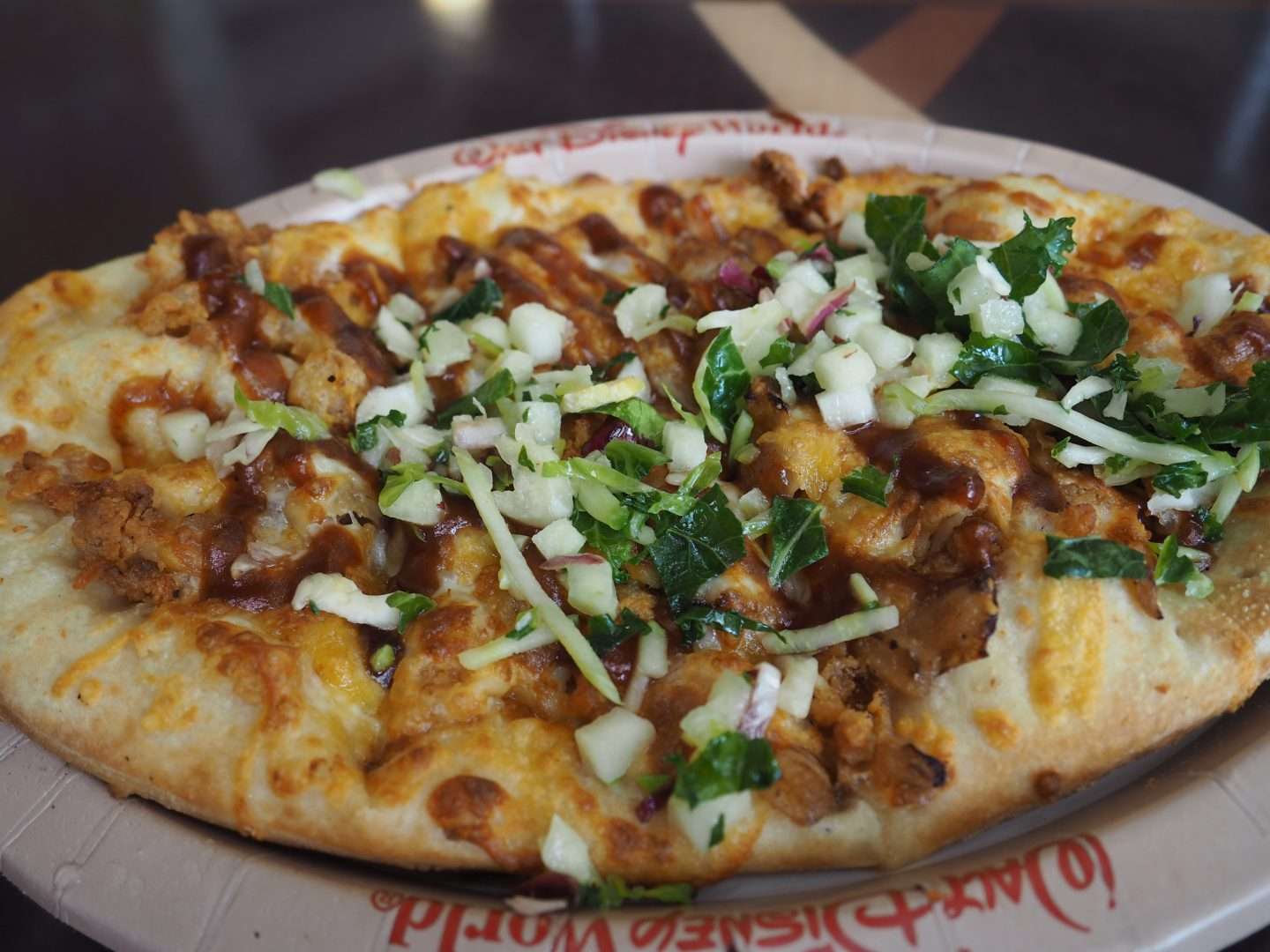 The Best Pizza at Disney Springs

Satisfying the locals need for a good pizza, the other place to go for pretty good pizza, besides Epcot, is Disney Springs.

Blaze: Apparently the “best pizza” around, Blaze is gaining some major traction as the place to go for pizza. The Chipotle or Piadas of pizza, you can build your pizza with a variety of sauces, toppings and everything gets cooked in about 5 minutes… so really the quality of this pizza is limited only by your ability to know what you like and combine it on a pizza to perfection. You can do a half and half order so you can share this pizza with a friend as well. You also get gluten free pizza options here.

Wolfgang Puck Express: Ok, so this was our first experience with Disney pizza and we were amazed at how big these pizzas were! Mainly because at the time it appeared that we’d each be getting our own for like 10 bucks each. Wrong. These pizzas will feed at least two people, are about 10-12″ and such a good deal price-wise we’d definitely go back. Great sauce and plenty of toppings this place, like Blaze, has a little cult following.

So there it is. This list is by no means a comprehensive list of all the pizza options, but it will give you your go to place in each park when the pizza cravings strike. Be forewarned… if it’s not on this list, it didn’t make the cut for good reason. Let us know if you find somewhere spectacular that makes our pizza cut for speed and cost:) Thanks! 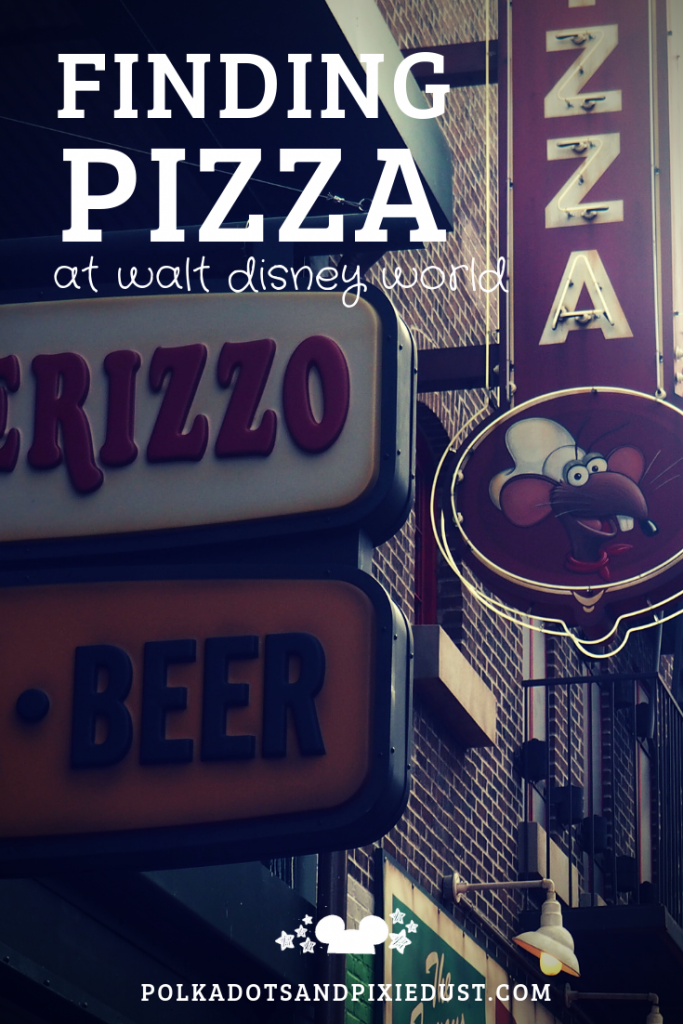