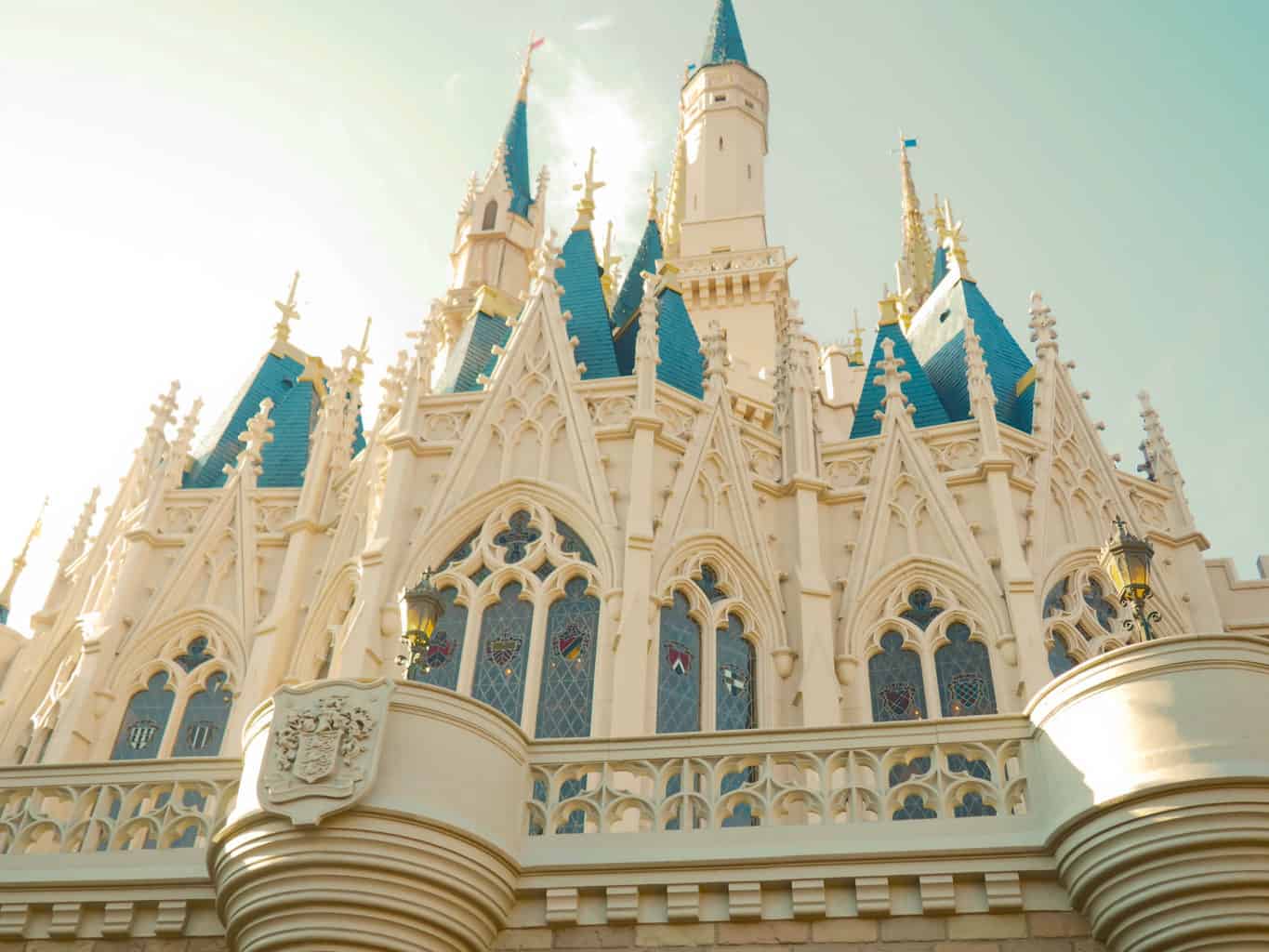 Cinderella’s Royal Table in Magic Kingdom is one of the most sought after dining experiences in Walt Disney World. I mean, come on, who doesn’t want to dine in Cinderella’s Castle?!?! The sheer idea of it makes me swoon. We’ve never made an Advanced Dining Reservation ( ADR) here though, simply due to the expense. This year we decided to take the plunge and see if Cinderella’s Royal Table was really worth all the hype, Disney Princesses and all. 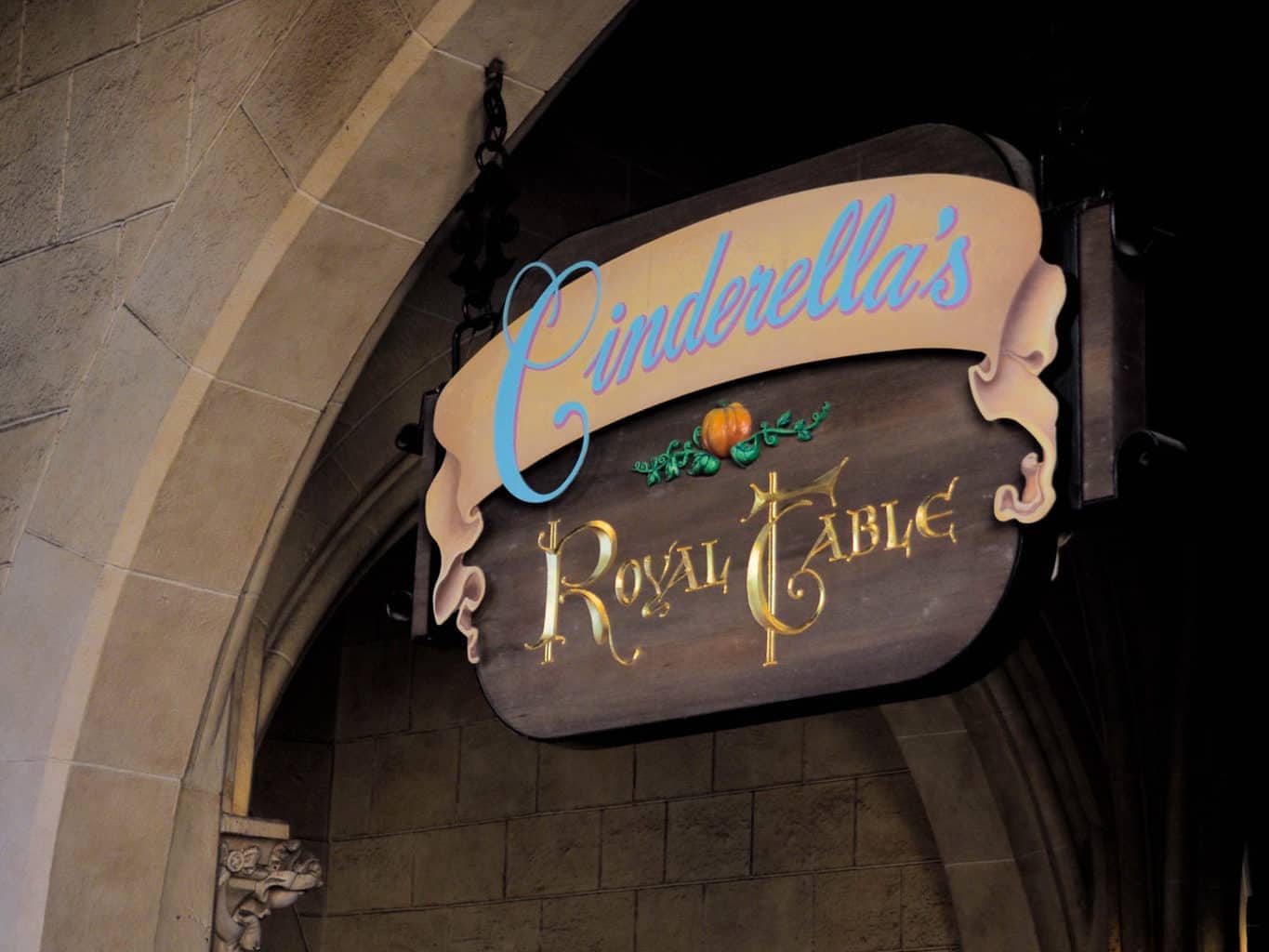 We decided to try breakfast here for two reasons. First, we love getting into the parks, especially Magic Kingdom, early. No crowds in front of the Castle, perfect time to take photos and just a nice calm in the air, like the calm before a storm. This was always the case before the new Rope Drop Ceremony. I recommend everyone make a breakfast reservation before the park opens at least once during their vacation.  Secondly, breakfast is the least expensive meal here. At $58 for adults, it’s still very expensive but still much cheaper than dinner.

Nonetheless, we were super excited to try out this magical place! We’ve been inside the castle before for the Bippity Boppity Boutique, but we’ve never seen the inside of the dining area. Or the second floor!!

How Does Dining in Cinderella’s Castle Work?

Believe it or not, you may completely miss the entrance to the castle restaurant if you aren’t looking for it! It’s directly in the back of the castle to the right hand side. The experience starts at check-in, like all of the table service restaurants at Walt Disney World. Once you receive your “invitation”, you are called back to wait in line for Cinderella herself!

While you wait, notice all of the details as you are waiting. The castle is beautifully decorated and really quite regal. We love glancing up and seeing details like this adorable Jaq and Gus just watching from the rafters. 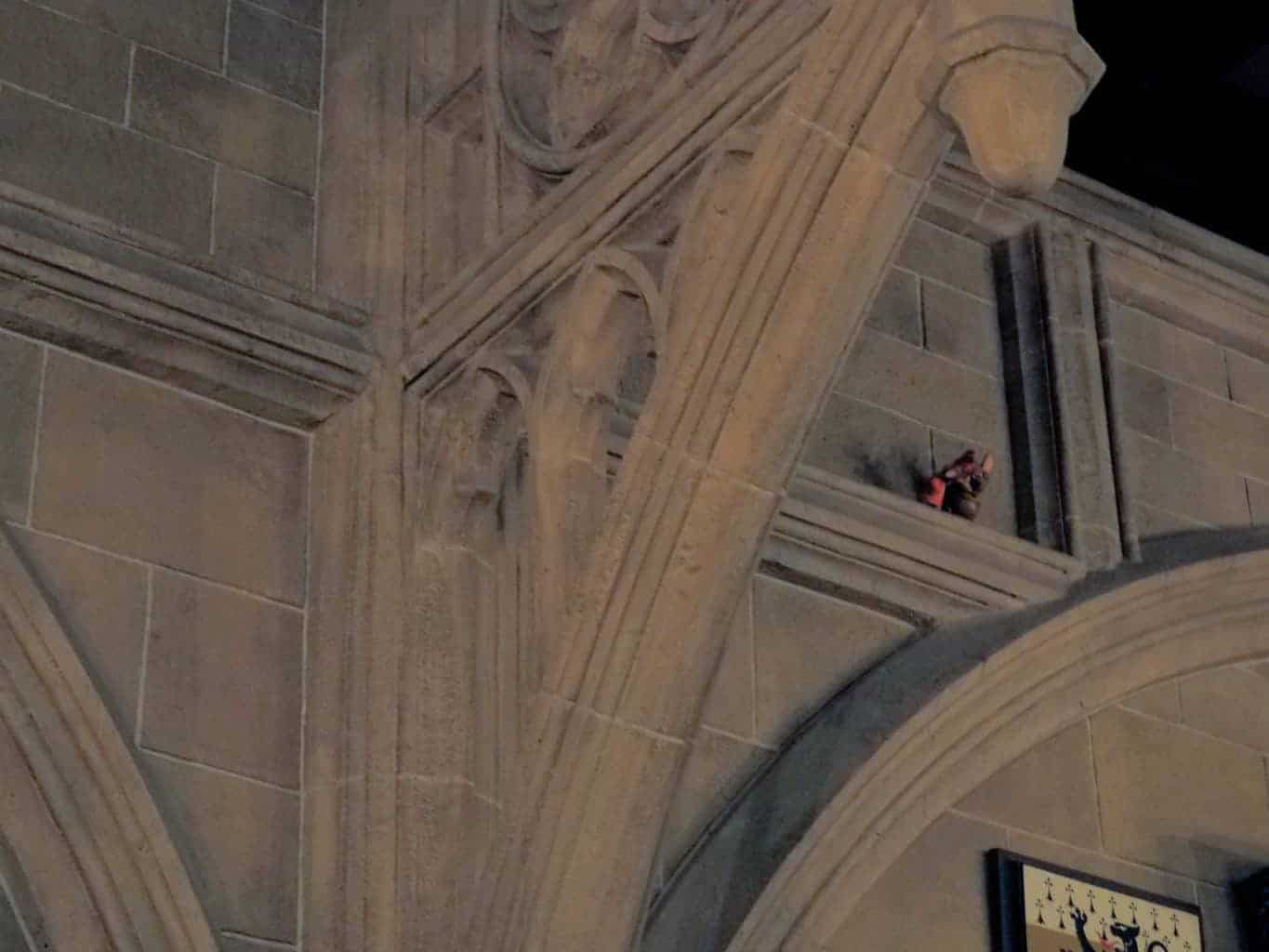 Cinderella makes a grand entrance down the spiral staircase and interacts with guests for a meet and greet and photo ops in front of the large fireplace. Its a similar experience to dining at Akershus Royal Banquet Hall in Norway at Epcot, where you can see also see all the princess at once. While Akershus is slightly cheaper, only 1 dining credit on the Disney Dining Plan and much easier to get into, the food there is much heavier as per the Norway culture. 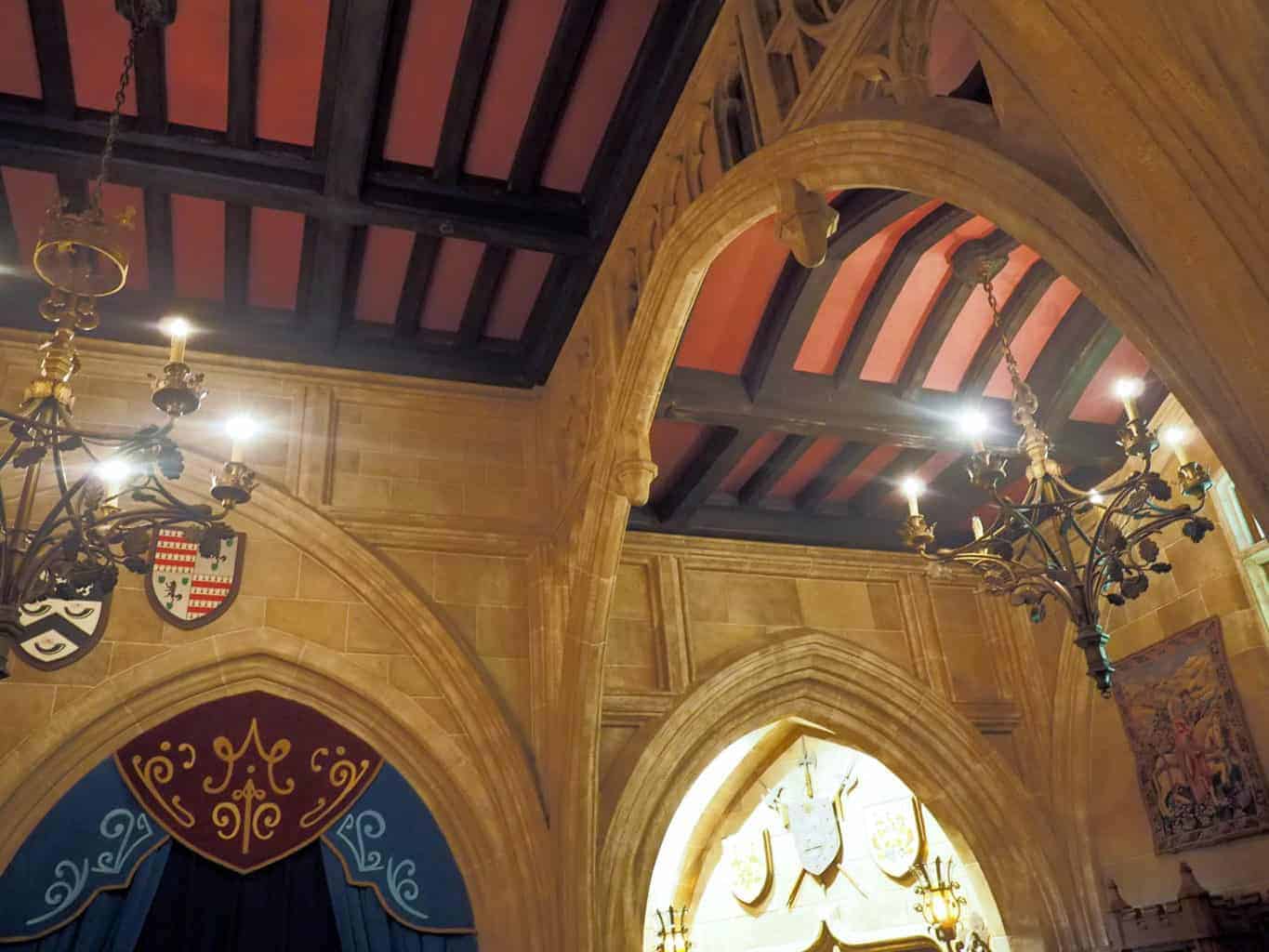 What’s so Great about Dining at Cinderella’s Castle?

Extra Magic is everywhere! After chatting it up with the princess, its time to eat! After we headed up the spiral staircase, we were seated. The dining room is much smaller than I had anticipated but it is beautifully decorated for royalty. We loved that during this meal you get to eat on the second floor of the castle! Since we were here at breakfast, they brought out a plate of pastries to enjoy while waiting for our server. Its similar to the pastry plate at Be Our Guest with a few variations.

Each child is given a magic wand and a wishing star as a souvenir for the wishing ceremony that occurs during the meal. Keep them handy!

The Princesses at Cinderella’s Royal Table in Magic Kingdom

One of the biggest draws is so many princesses in one place! The princesses come around, sign your autograph book and pose for pictures. It sure beats waiting in several different princess character lines just to get the photos. But do keep in mind that these are dining room, restaurant pics. So if your autograph book is more your concern, you’re golden. If you really want the perfect pictures in front of a nice backdrop, you should probably wait in those meet and greet lines. Because every pic with the princess could easily have the dining room or other guests in the background. 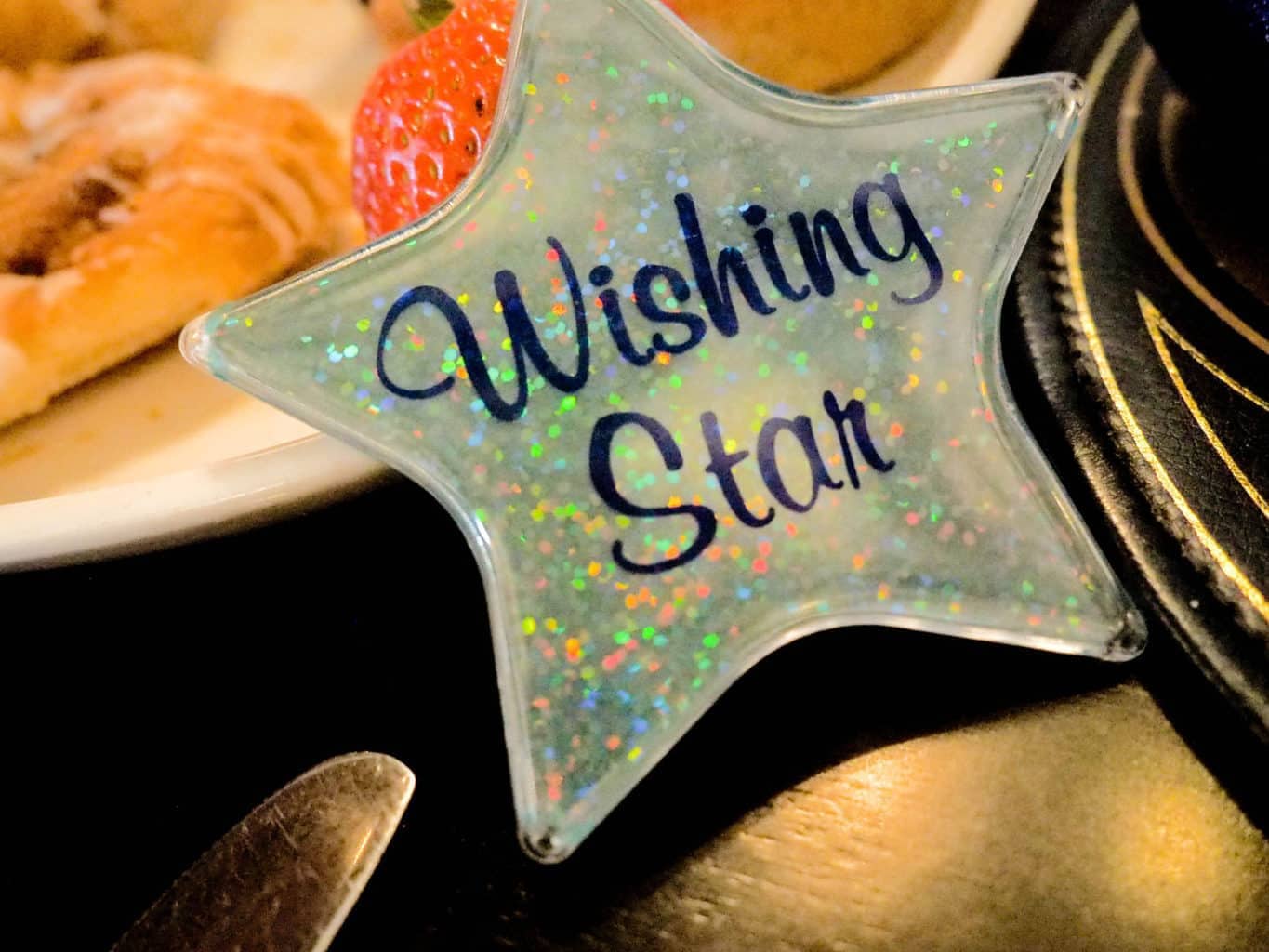 While I feel the menu is quite lacking for breakfast, keep in mind that all of the items are the same price, except the kids menu item. Let me repeat that…. All The Items Are The Same Price. Choose wisely. I ordered the Beef Tenderloin with Broccolini and Egg and G ordered the Caramel Apple-Stuffed French toast while Rochelle ordered the Healthy Choice, a combo of avocado, egg, salad and red onion. 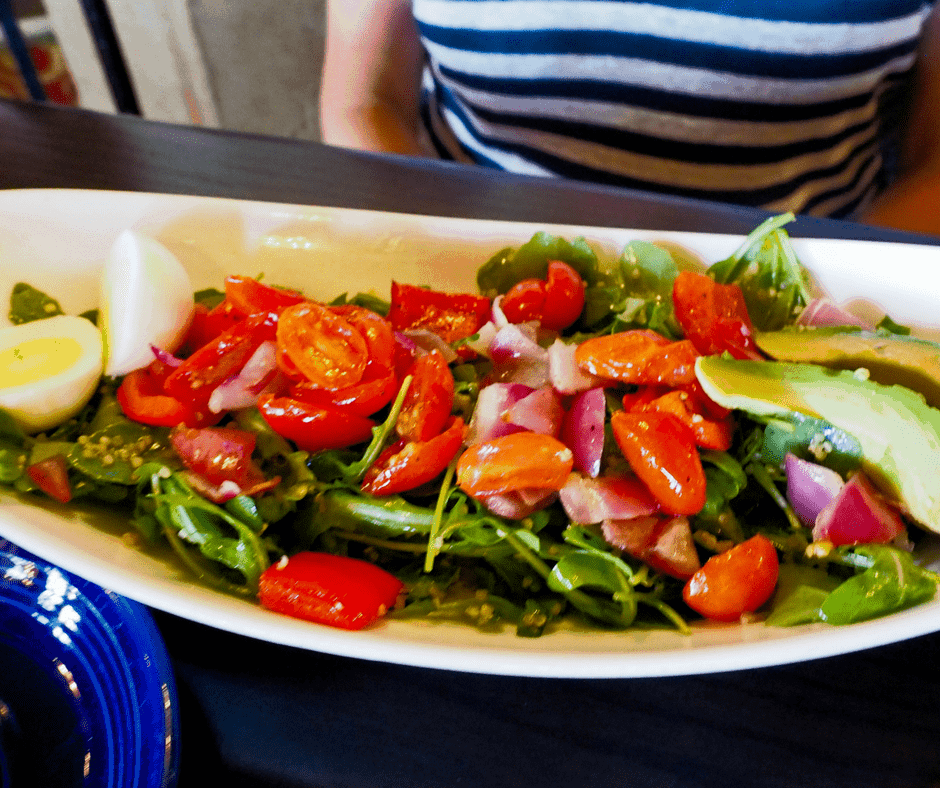 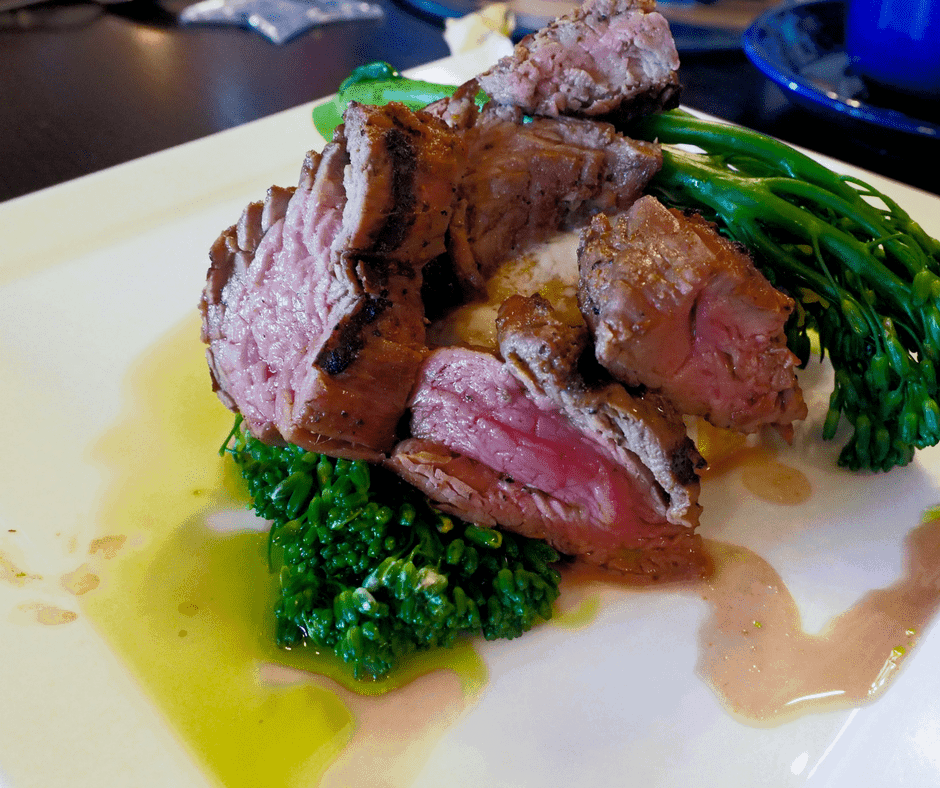 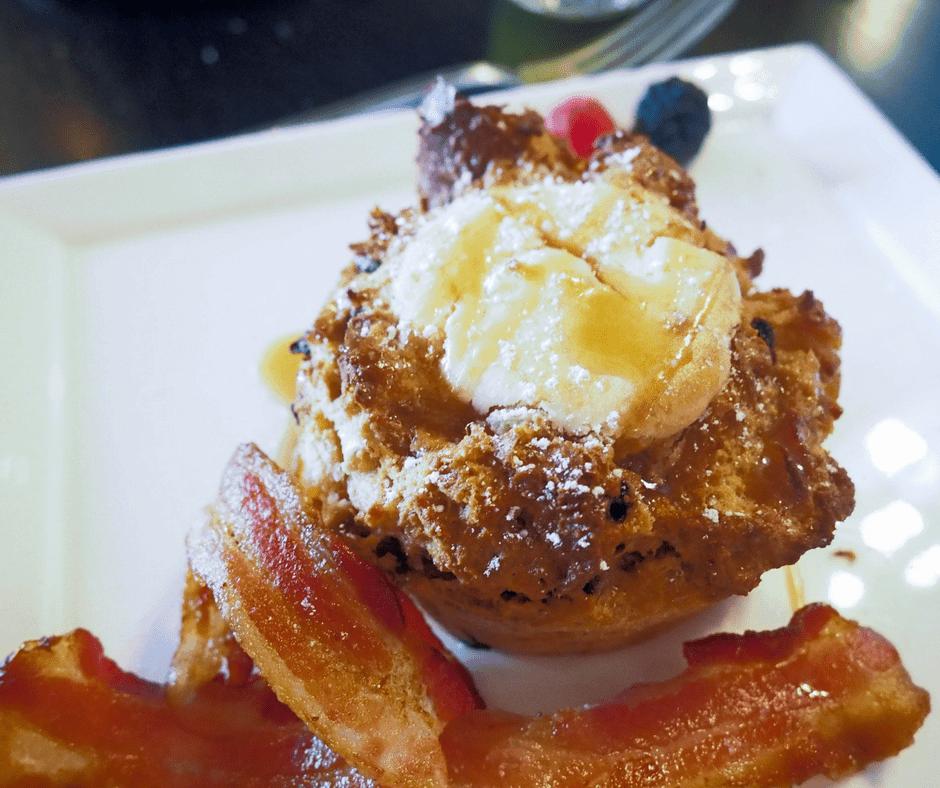 Sadly, while I very much enjoyed my breakfast, G and Rochelle were both very meh about theirs. G actually didn’t like hers at all and only maybe ate a few bites. The French Toast here is more like a bread pudding, and not the delicious one you can find at Ohana at the The Polynesian either. While we all thought the french toast sounded delicious, both Rochelle and I tried it as well and it just wasn’t to our liking either. Rochelle’s biggest complaint was that the meal itself, the Healthy Choice, would have probably costed less than $5 to make at home and was definitely not worth the $58 price tag.

If you’re here for breakfast and enjoy meat, I highly recommend the Beef Tenderloin and Egg as it is most likely the best value for the money and I did find it pretty tasty.

Is Cinderella’s Royal Table Worth 2 Dining Credits or 60 Dollars for Breakfast?

Obviously the food is not the only reason we came here. Being able to meet all of the classic princesses in one, air-conditioned setting is always a plus if it can be managed. The princesses come out one by one, announced every few minutes and make their way around to the tables. Have your autograph books and cameras ready! 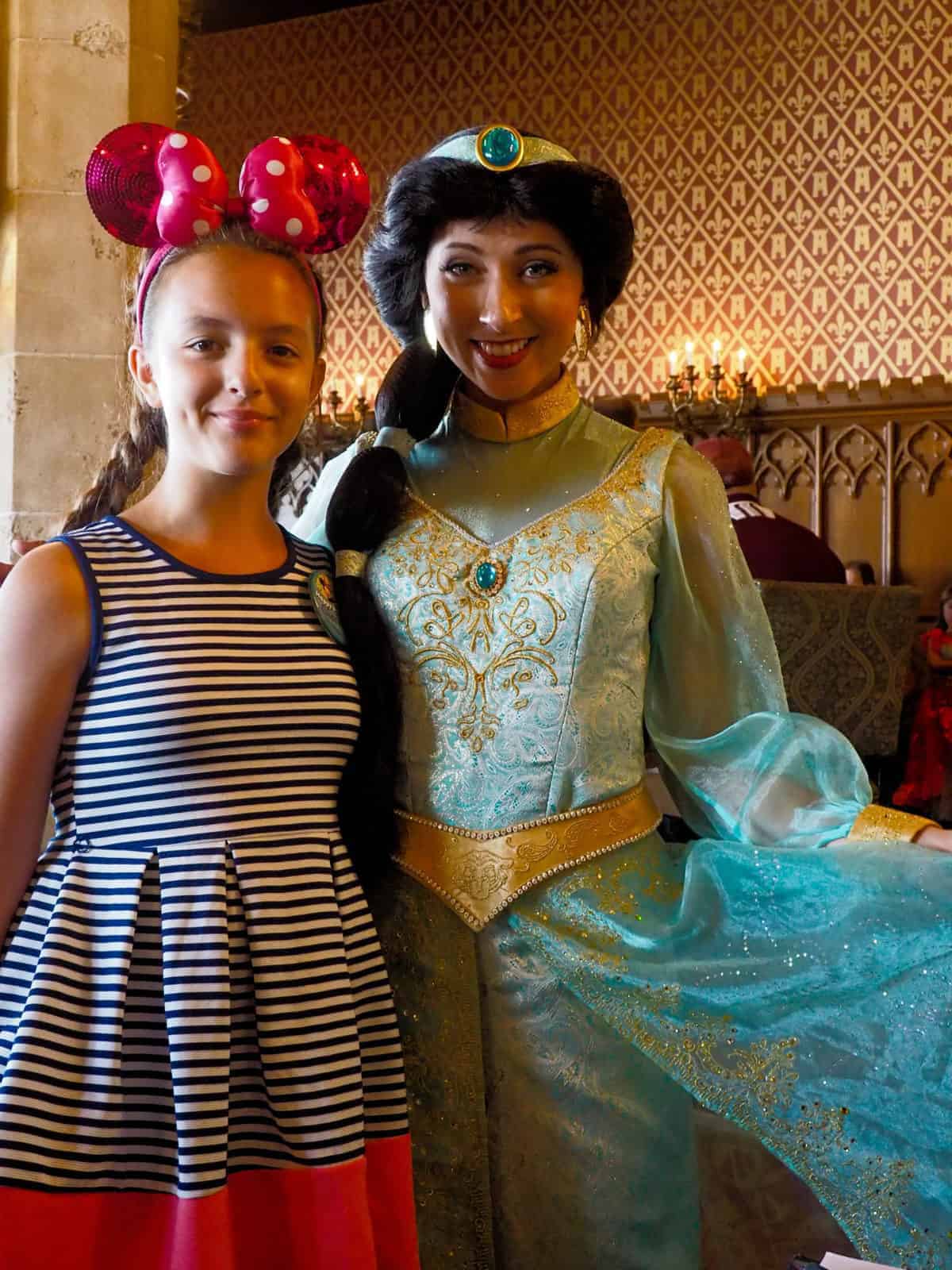 The ambiance of this restaurant was chaotic. I wish I could say otherwise, however I have to call it like I see it. That being said, I’m sure like any restaurant, that’s not a one-size-fits-all type of statement. We were there on a Saturday morning, with lots of small children who were undoubtedly very excited. So it was very loud and also very crowded mostly just due to the size of the dining room. We felt rushed, which is not a great feeling when you’re spending 180 dollars on breakfast. I’m sure this is probably not the case all of the time and probably not the case for dinner when the meal price is even higher. So take that with a grain of salt. The service was also slightly lacking, but again, that’s not a concrete statement either as I’m sure the hectic atmosphere of the morning contributed to that as well.

We did get the adorable plastic star for G, which was a perfect “free” souvenir, but were unable to even hear the wishing ceremony taking place due to the loudness in the restaurant but it looked like it would’ve been fun! The lights flash all around the castle which is kind of cool so at least we were able to experience that much of it! 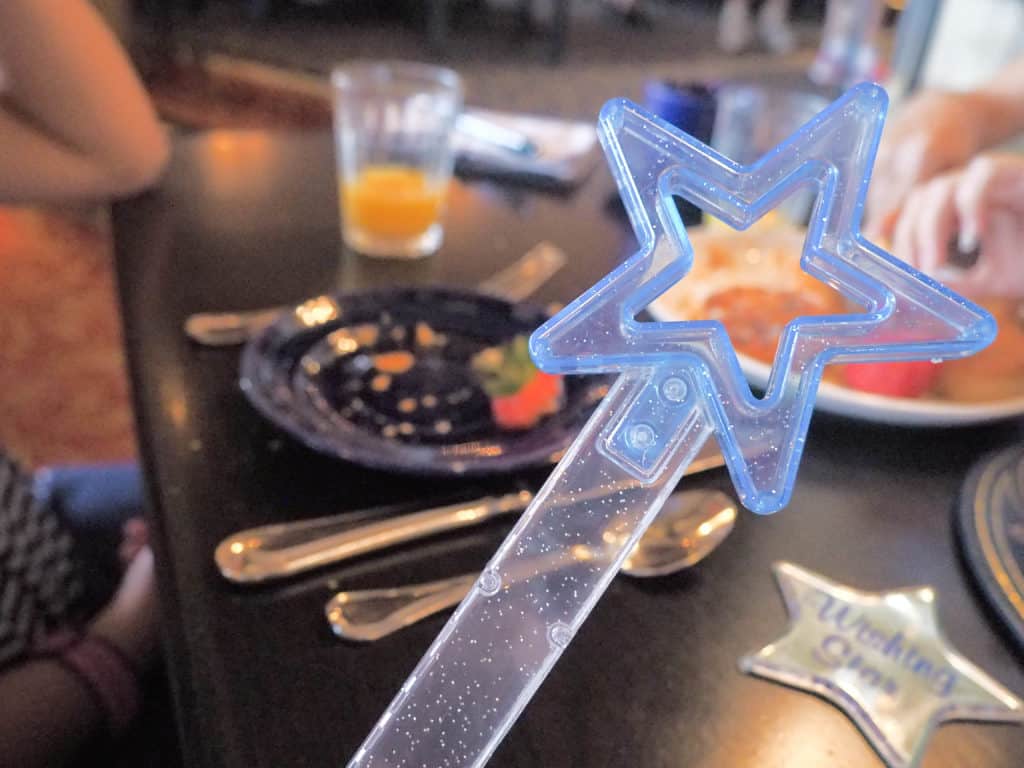 Overall, we did like dining at Cinderella’s Royal Table simply for the experience of being inside the castle. Its been a Disney bucket list item for us for a while and I’m glad that we were able to do it. Seeing how I spent almost half of my normal month’s food budget in a single setting on mine and G’s breakfast for one day, I doubt we will return any time soon, but I’m glad that it was something we were able to experience, even if it is just once. 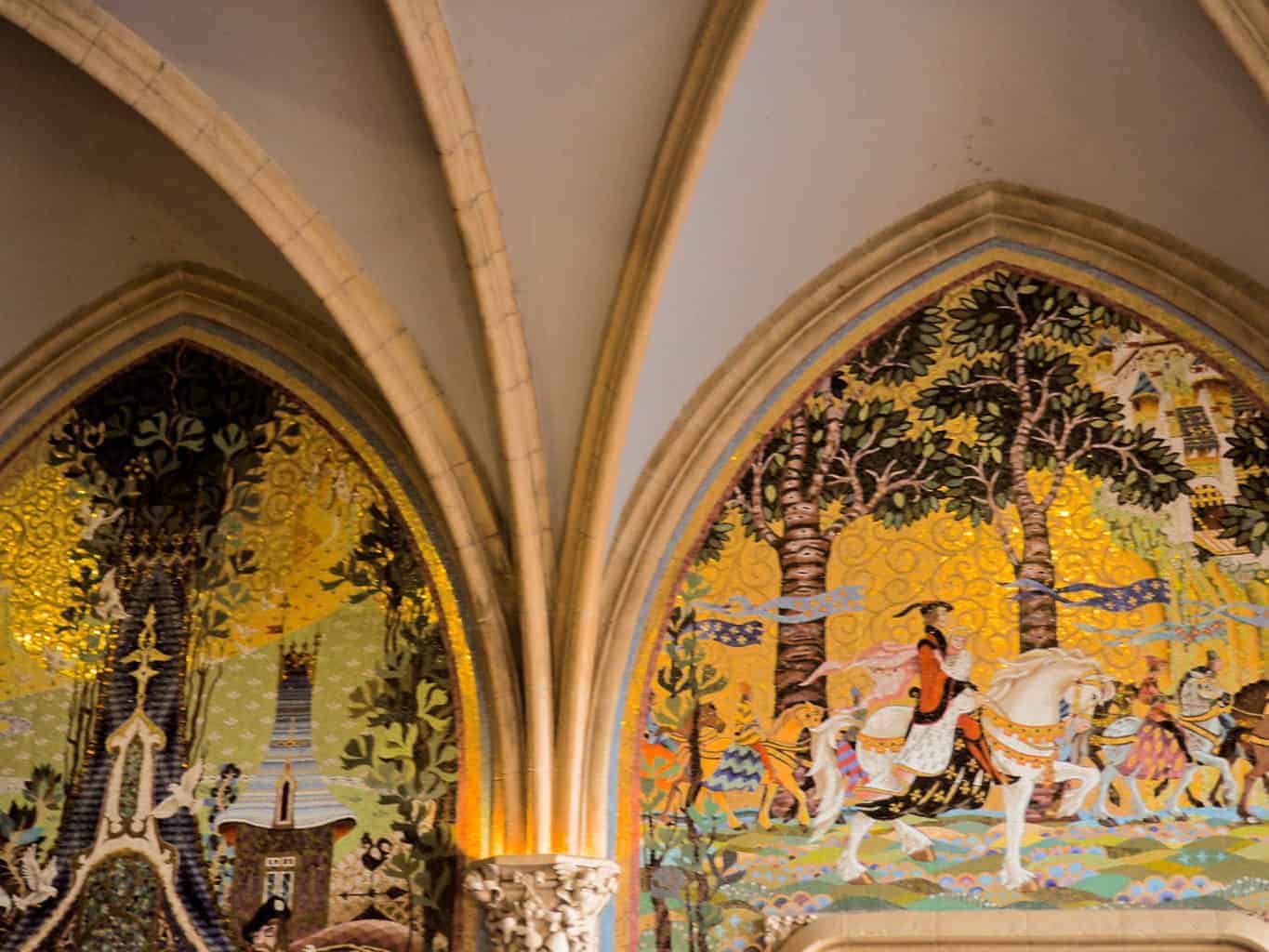 Would We Recommend Cinderella’s Royal Table?

Hmmmmm…..It really depends. I would hate to discourage anyone from trying this restaurant for the mere fact that it is an experience you can only have at Walt Disney World. The castle is iconic and dining here should be on your Bucket List, to visit at least once. Being inside the castle and seeing the view from here is something that can really only be done if you dine at Cinderellas Royal Table Restaurant. 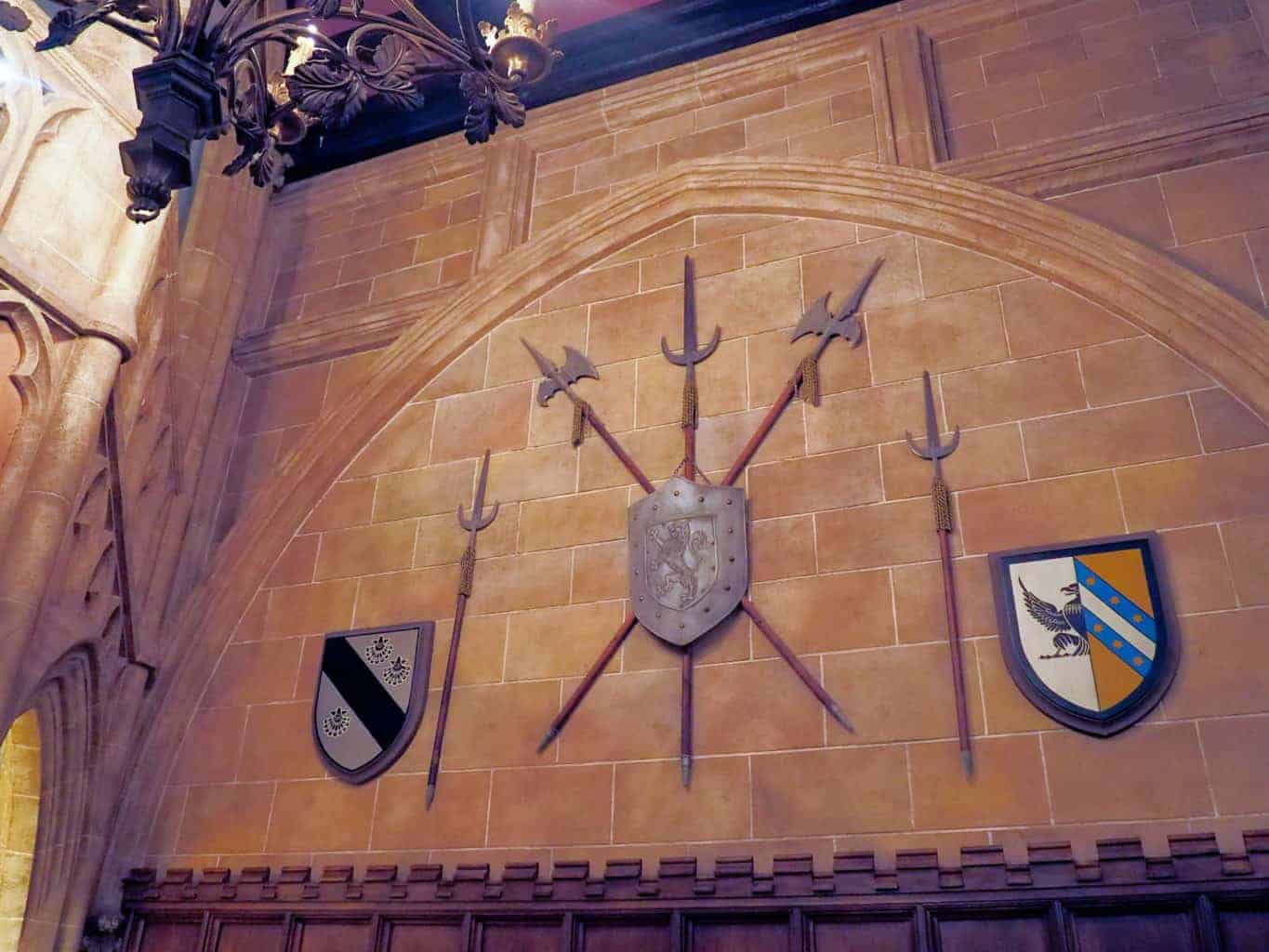 If you’re using the Disney Dining Plan, this reservation will cost you TWO entitlements. Yep, 2 table service meals for this dining experience. Since we go often and usually on a budget, we aren’t really willing to give up that extra entitlement for one meal, when we can actually get two meals later.  On the flip side, its pretty expensive to eat here as well. So if you’re dining with your family, consider this quite the splurge. We would definitely say this is a restaurant you want to book when you’re lucky enough to get the Free Dining Plan deal, at least then you aren’t technically paying for the food, so using 2 credits for 1 meal is a little easier to swallow.

Since Be Our Guest opened, Cinderella’s Royal Table doesn’t seem to be as difficult to score a reservation. There have been multiple occasions that I would have been able to get an Advanced Dining Reservation here and simply chose not to. That being said, however, you will still want to stick to the 6 month reservation timeline if possible. Other reservations will open up, but its much easier if you simply plan well ahead.

What We Really Think

While I did enjoy my breakfast, the portion sizes were actually considerably smaller than I’ve grown accustomed to at Walt Disney World. To me that’s fine because I think portion sizes are way too big to begin with, but for some people, they might find this disappointing. Especially if you’re used to the buffet all-you-care-to-enjoy dining found elsewhere at Disney Restaurants.

I wouldn’t recommend this restaurant as a way to get a head start at Magic Kingdom unless you can get the 7:55 AM time. Even that could be cutting it close. It took an hour and a half for us to meet Cinderella in line, meet Jasmine, Ariel, Snow White and Aurora at our tables, and be served our breakfast so by the time we were done with the whole experience, we were really no more ahead than anyone else. If you’re looking to get an early breakfast and and early start at the parks, we recommend the 8 AM buffet at Crystal Palace or as early as you can get a quick serve at Be Our Guest. Both will get you into the parks much faster.

If you do not have a dining plan applied to your account upon booking, you will be required to pay for this meal in full with your credit card on file when booking. Keep that in mind if you are booking for a large amount of people.

Have you been to Cinderella’s Royal Table? Do you think its worth the splurge? Let us know! 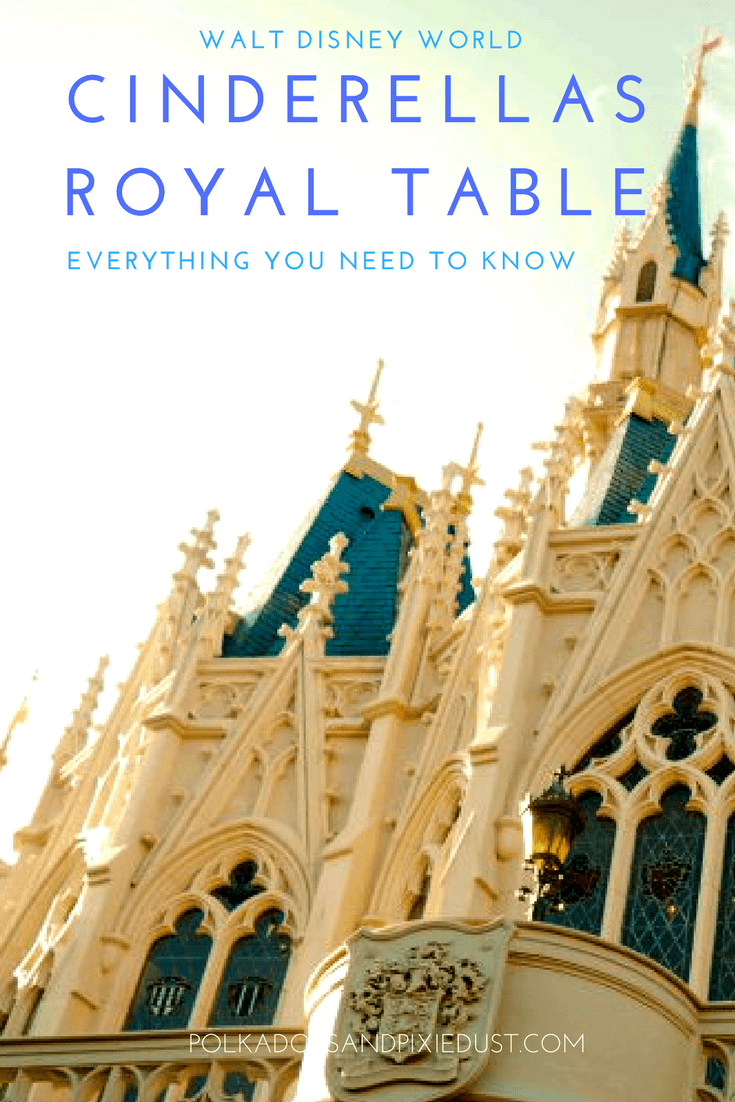