Disney Dolphin Or The Swan What’s the difference? 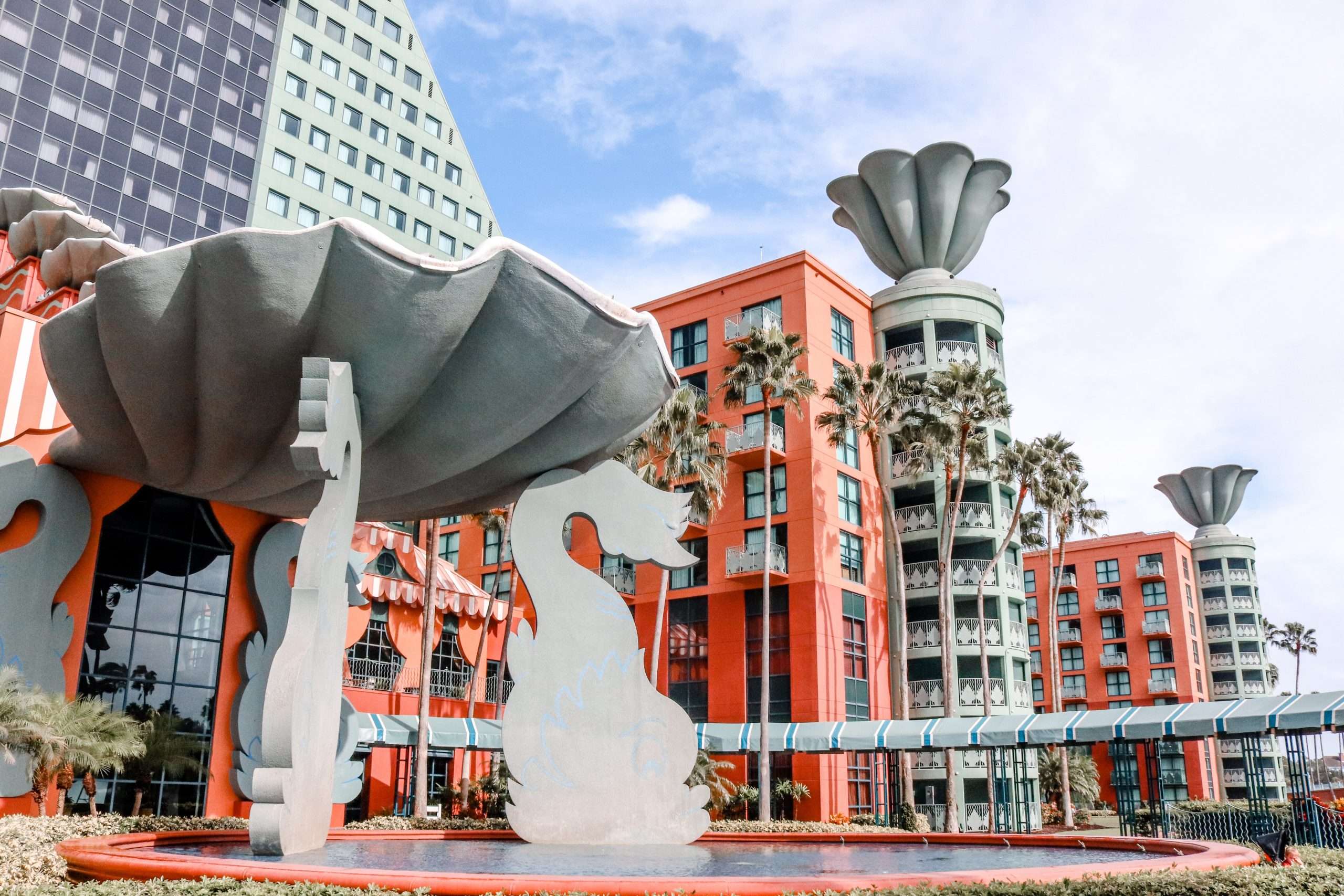 Are you Choosing between the Disney Dolphin Or The Swan Hotels at Walt Disney World? While these two resorts can both be found on Crescent Lake there are some differences that set them apart.  As much as we love them both, they do each have their own perks and style. Not sure which suits you better?  Cost, size, availability, and atmosphere are the biggest differences when comparing the two; but many of the differences are really just a matter of personal preference. 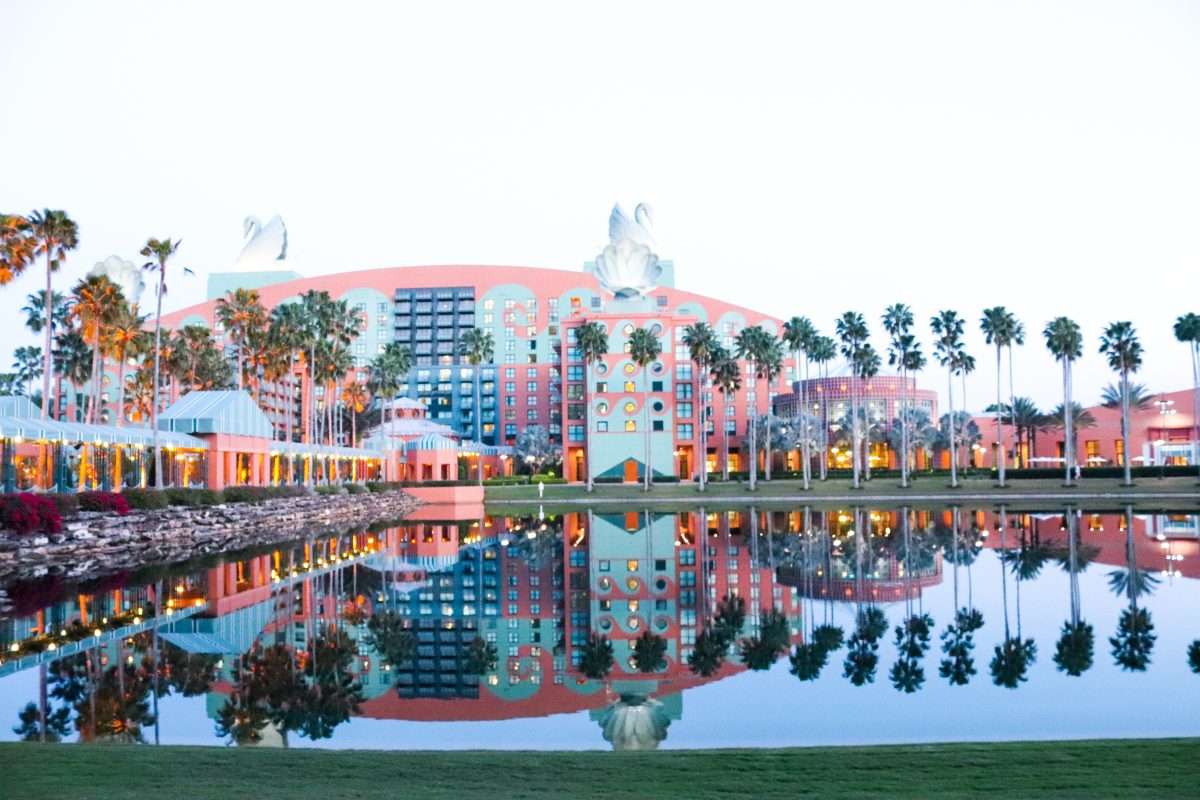 What are the Disney Swan and Dolphin Hotels?

Have you ever strolled the Disney Boardwalk and wondered what’s up with those towering resorts behind it? If you haven’t ventured all the way over to this part of the Disney Boardwalk then you may not have noticed these are sister resorts; one has dolphins on the roof, and the other has swans. While these resorts won’t come with any Disney theme-ing, they do come with all the resort luxuries you could hope for, including pools, beaches, gym’s restaurants, spas, and more!

Is the Swan and Dolphin a Disney Resort?

Technically, no they are not traditional Walt Disney World hotels. The Dolphin is managed by Sheraton and The Swan is managed by Westin, both of which fall under the Marriott Bonvoy Umbrella of brands.  This is actually great news for those who participate in Marriott Bonvoy’s hotel loyalty program because you can earn and redeem points by staying in one of these hotels.

Both the Swan and Dolphin offer many of the same perks as a traditional Walt Disney World resort though. They both offer transportation to and from the Parks and allow you to take advantage of extra magic hours in the Parks.  There is even a character breakfast at The Swan on Saturdays and Sundays featuring some of our favorite classic Disney characters.  Both resorts offer the option to book a vacation package with them as well and FastPasses can be made at the 60-day mark.

The big difference between true Walt Disney World resorts and the Swan and Dolphin is basically just a couple of things. There is no Magical Express available for these two hotels. You can arrange for transportation from the airport but it is an extra cost. Disney Magic Bands also don’t come with a room at the Swan and Dolphin resorts, so if you’ve had a Walt Disney World trip before, you’ll want to reuse your magic band or you’ll have to purchase one separately if you plan to use it in the Parks. Swan and Dolphin guests also cannot make charges to their Magic Bands.

What is the theming of the Swan and Dolphin?

Neither the Swan or Dolphin hotels have the theming you’re probably used to seeing at a Disney Resort. For some people, it’s a nice departure from Disney all day every day while on vacation; and for others, that may not be the case. It’s always good to be aware!

The decor at the Dolphin is a bit grander, while the theming at the Swan is more toned down and elegant.

Where are the Disney Swan and Dolphin Hotels Located?

The Disney Dolphin and Swan are actually located in one of our favorite spots in all of Walt Disney World, right off of the Disney Boardwalk! While the hotels are both very nice, we think the main reason you should stay here is for the location. Not only is Disney’s Boardwalk a fabulous destination all on its own; it’s also within walking distance to Epcot and Hollywood Studios. This is a great perk as it’s only about a 10-minute walk to Epcot or the Disney Skyliner and about 15-20 minutes from Hollywood Studios. 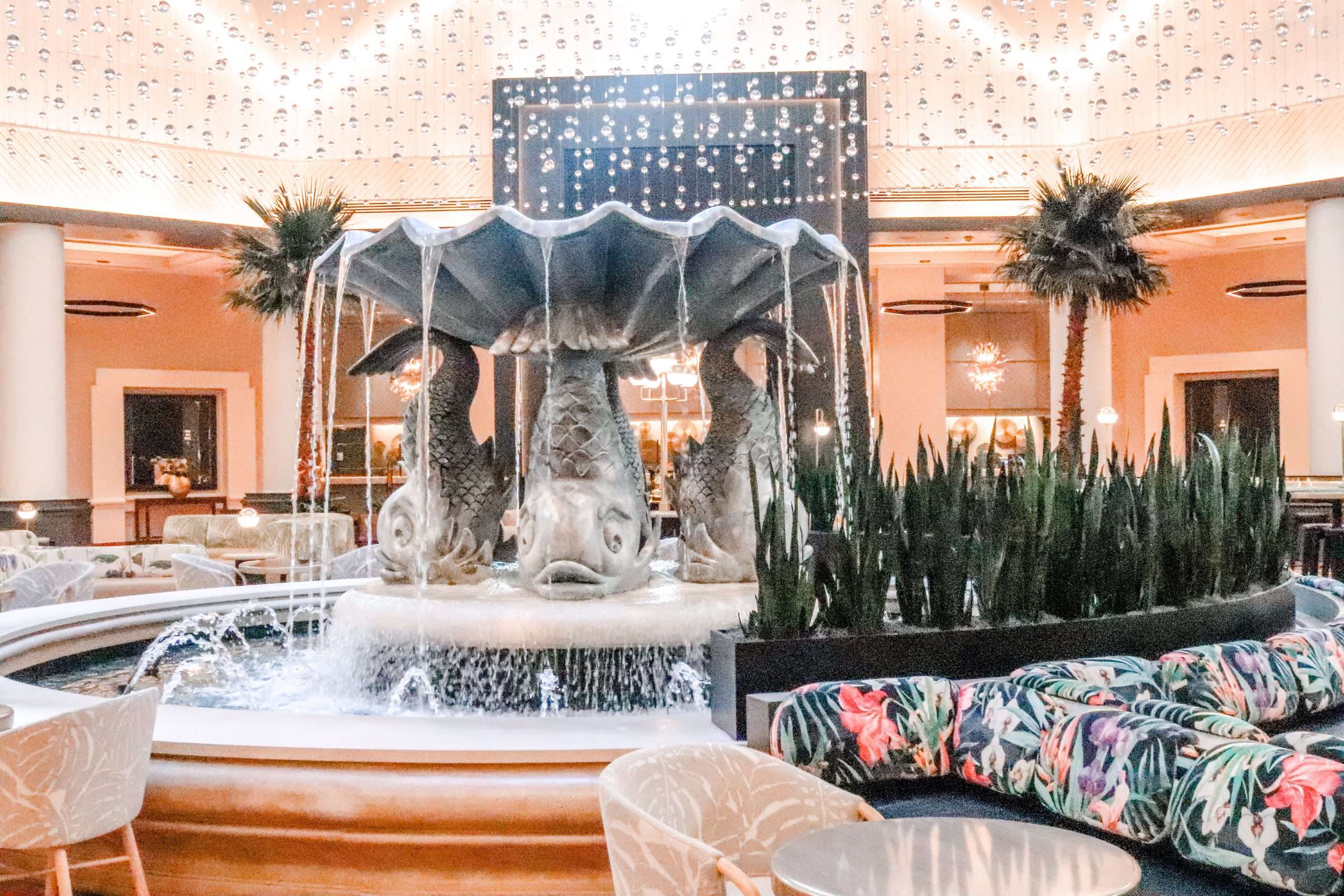 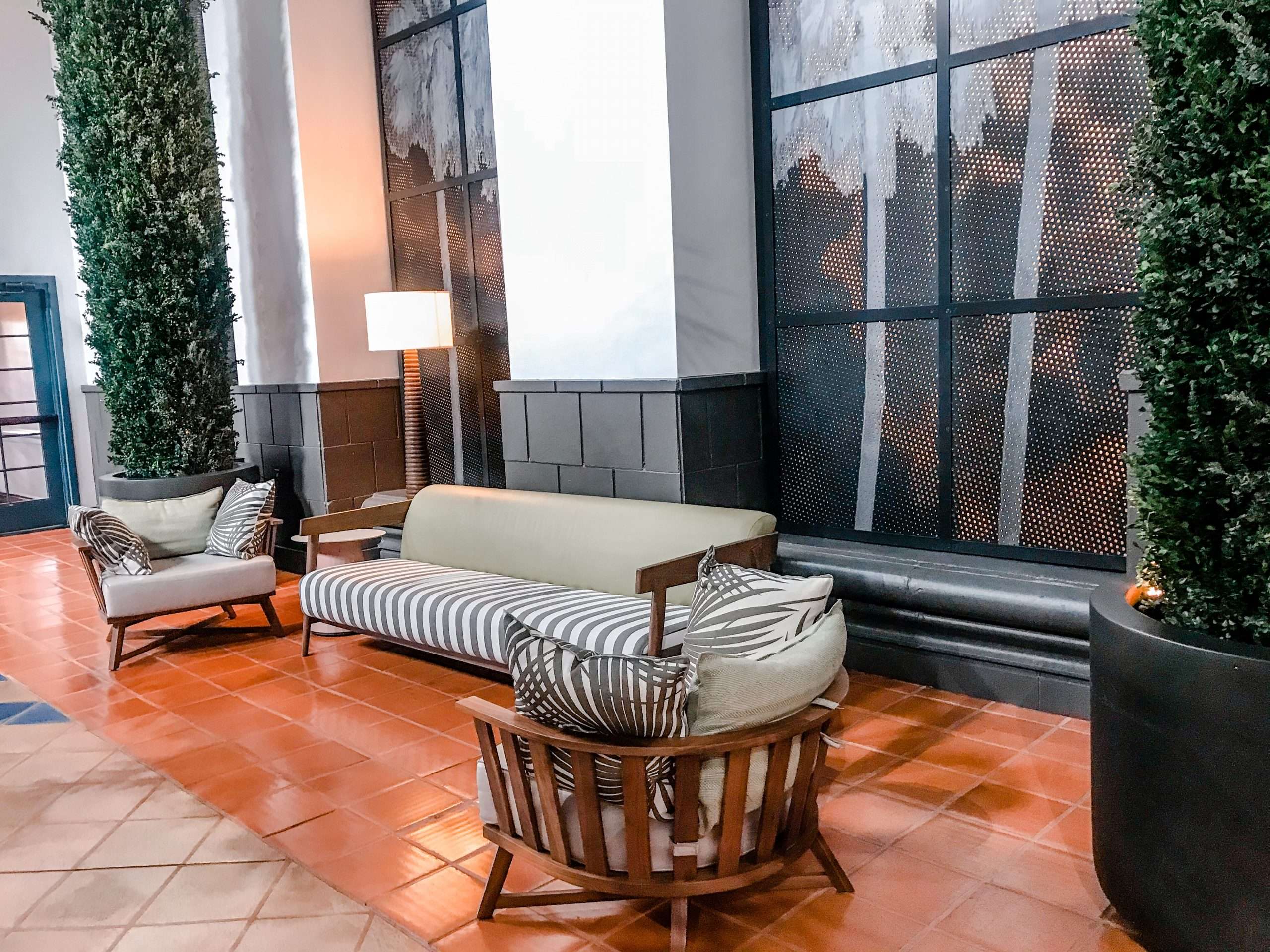 The Dolphin Hotel at Walt Disney World is all about luxury. With a grand entrance, fountains, classy bars, and resort shops, this place gives you the feeling of vacation, but definitely different than you would find at a standard Disney Resort.

The Dolphin is really quite a grand hotel. It’s large in size, it has a gorgeous standout lobby and beautiful, modern decor. The atmosphere is fun and almost always feels like a party. From the bar in the lobby to the music being played to the light-up palm tree show outside at night, The Dolphin is definitely the more exciting and fun of the two hotels. 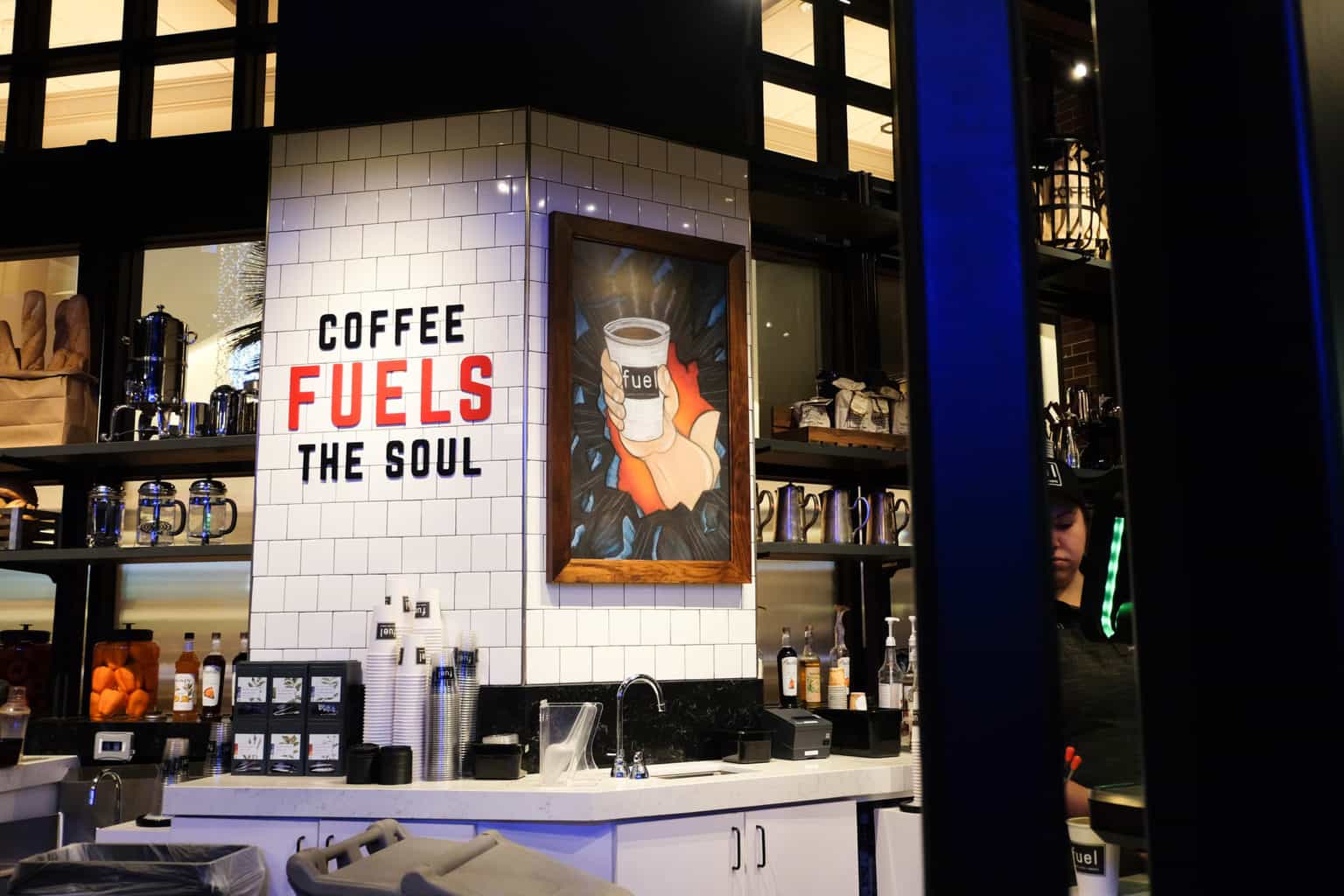 What are the Dining Options at Disney’s Dolphin? 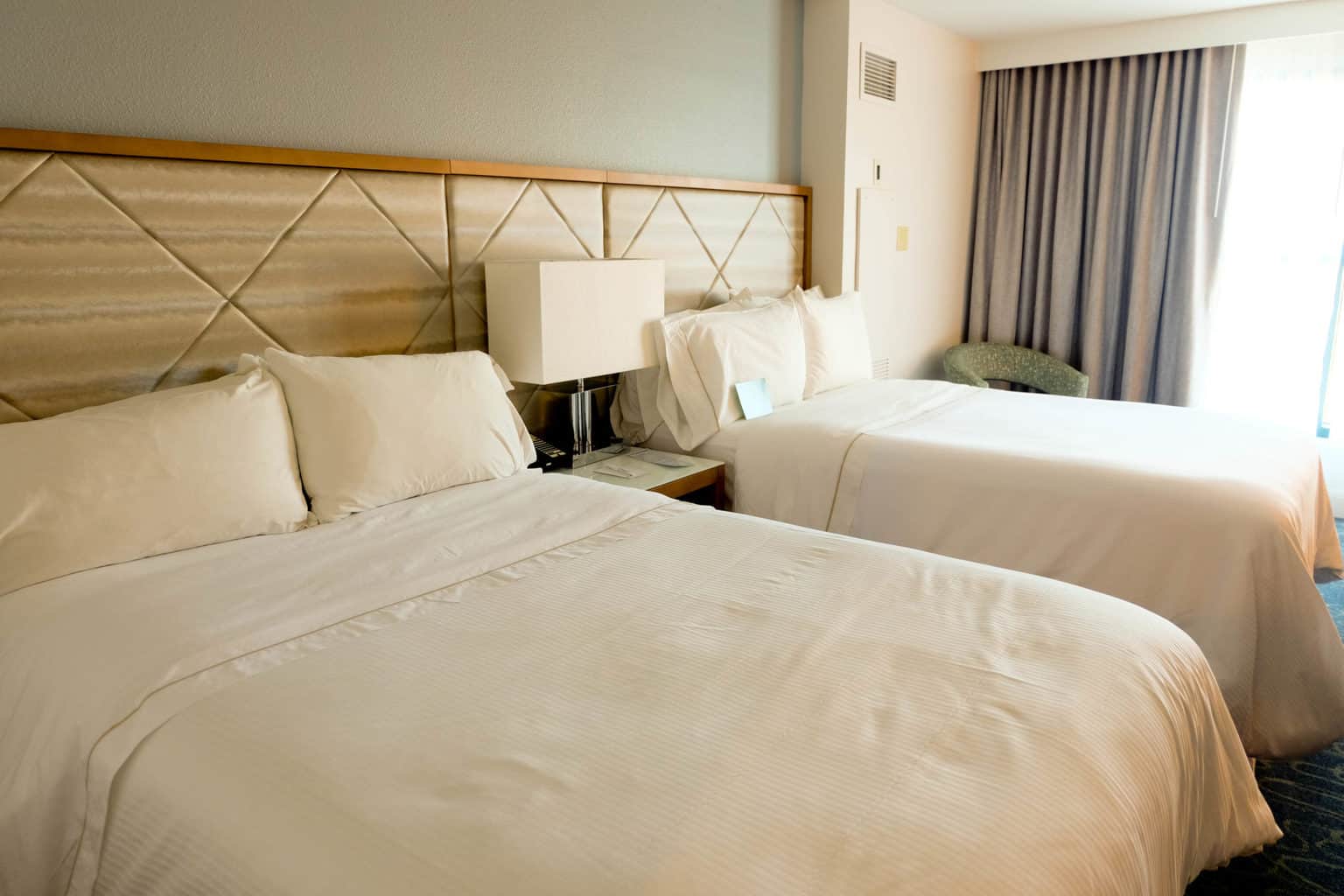 The rooms at Disney’s Dolphin are clean, spacious, comfortable and a standard room sleeps up to 5.  There is a wider variety of rooms at the Dolphin and while both resorts offer luxurious presidential suites, The Dolphin is home to their grand two-level suite. We love the rooms with a view and a balcony! 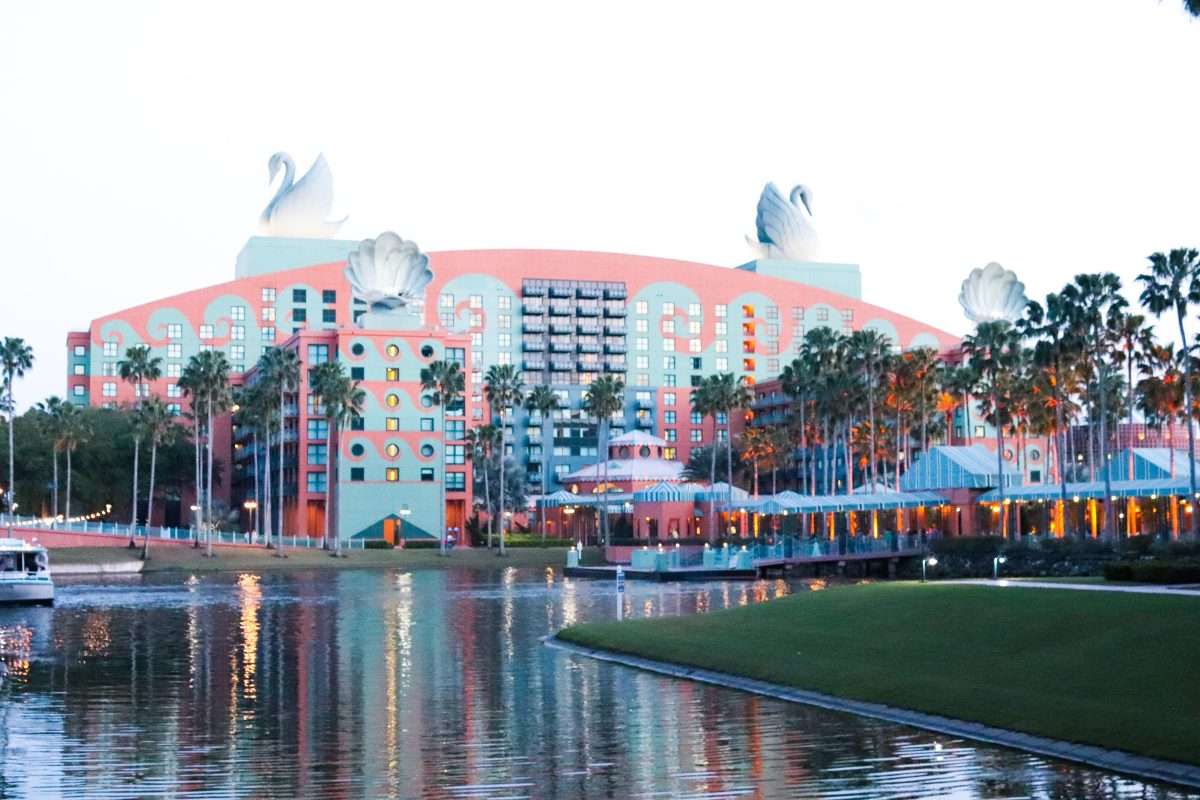 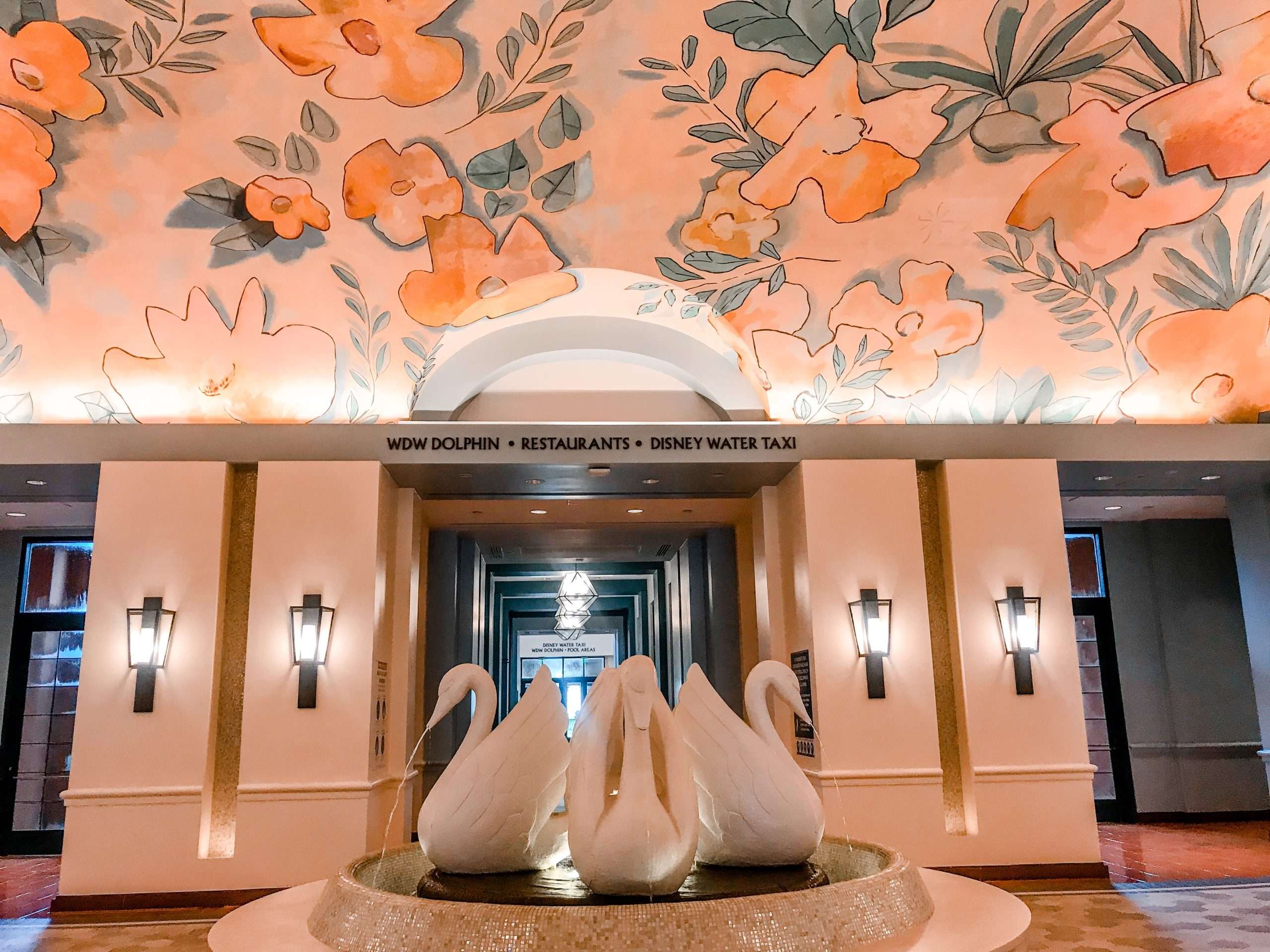 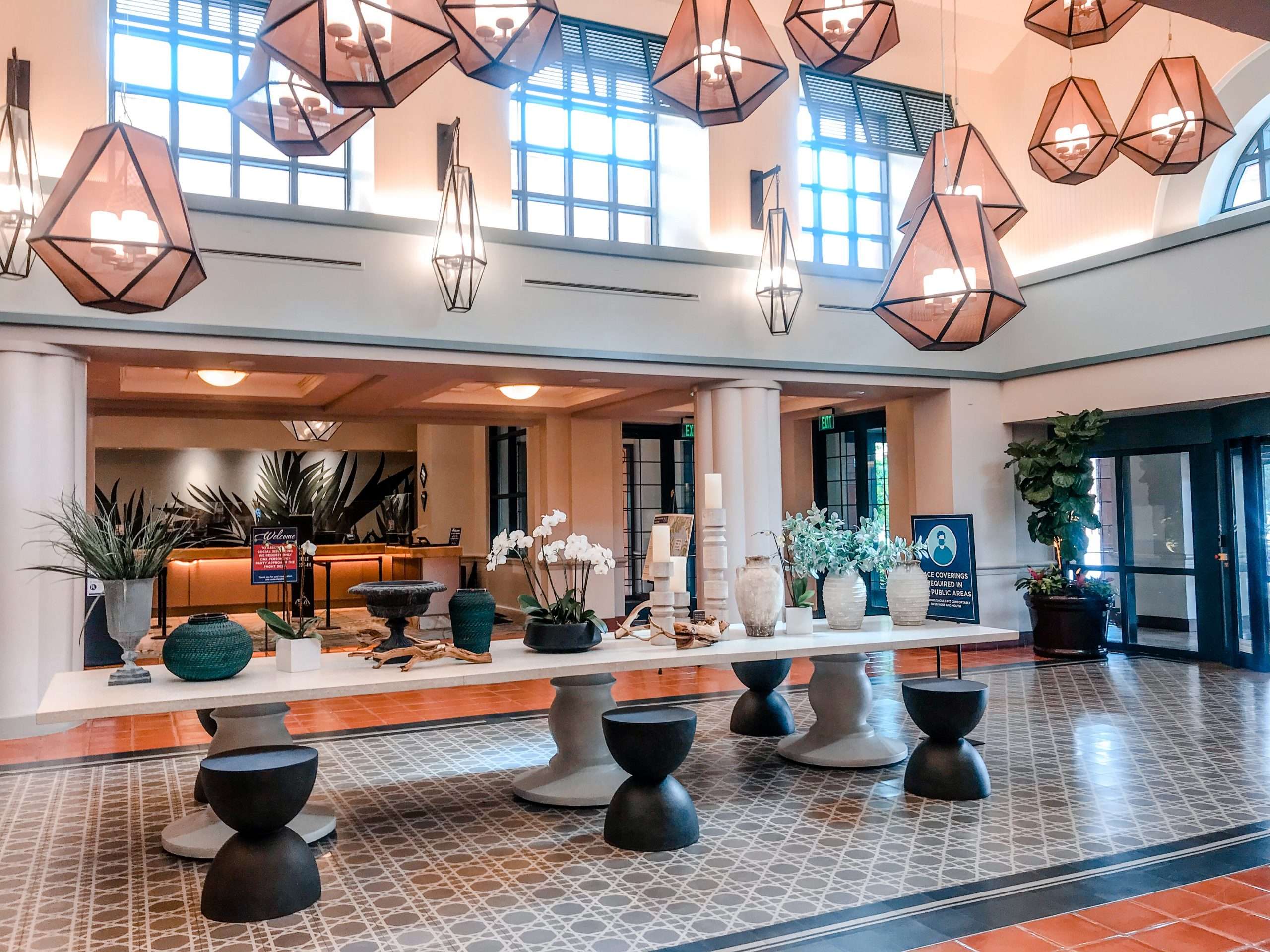 The Swan Hotel is just as beautiful. If you’re looking for something a little more classy, that’s close to both Epcot and Hollywood Studios, via one of Disney’s secret walking paths, then the Swan may be just the ticket.

The Swan is a much more intimate, boutique-like setting and although they’re sister hotels, it just feels a bit more expensive. It’s a lot smaller and you can tell from the moment you walk inside. While The Dolphin often feels like a party, The Swan keeps it much more low-key and feels more personal and quiet. The decor is still beautiful, but much more quaint and simple than its sister, The Dolphin.

What are the Dining Options at Disney’s Swan?

Disney’s Swan is home to several restaurants onsite, including signature restaurants like Il Mulino Trattoria and Kimonos as well as the guest-loved character breakfast spot, Garden Grove, and their newly renovated coffee bar, Java which is perfect for grabbing your morning latte on the way out to the Parks.  Dining is open to guests at both resorts, so feel free to resort hop for food options. 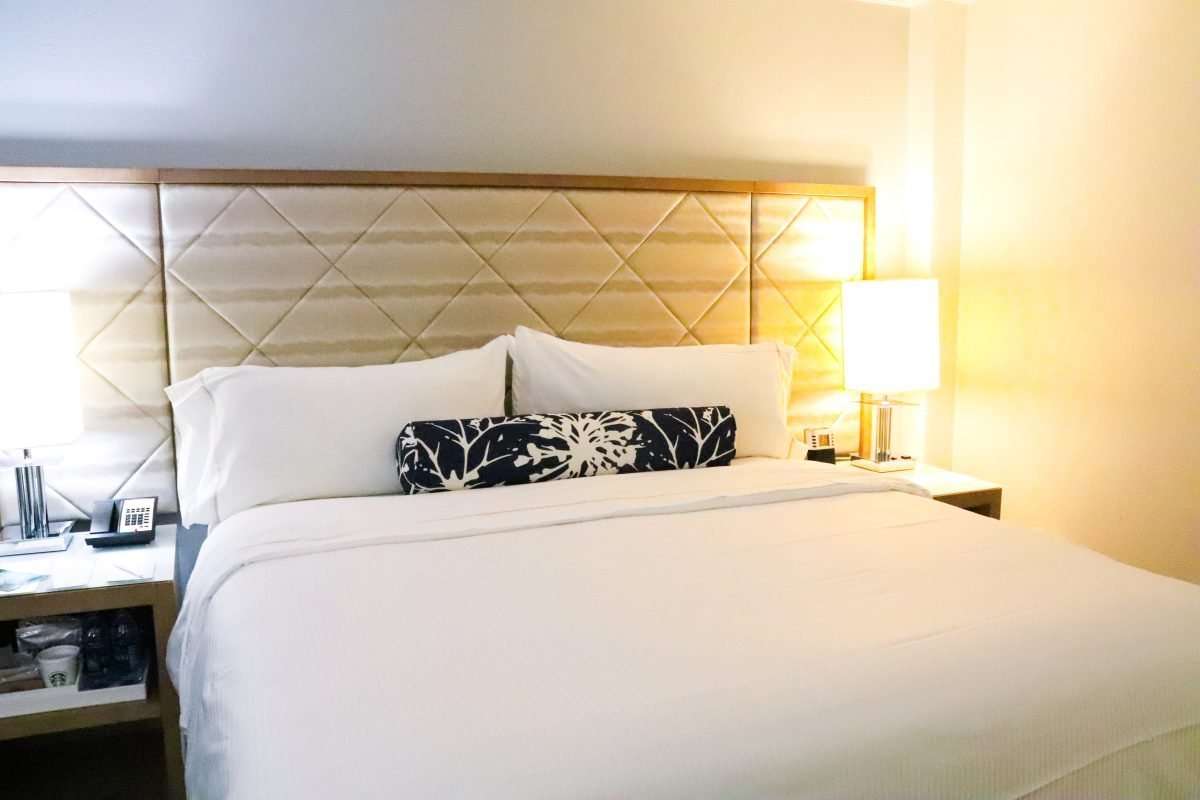 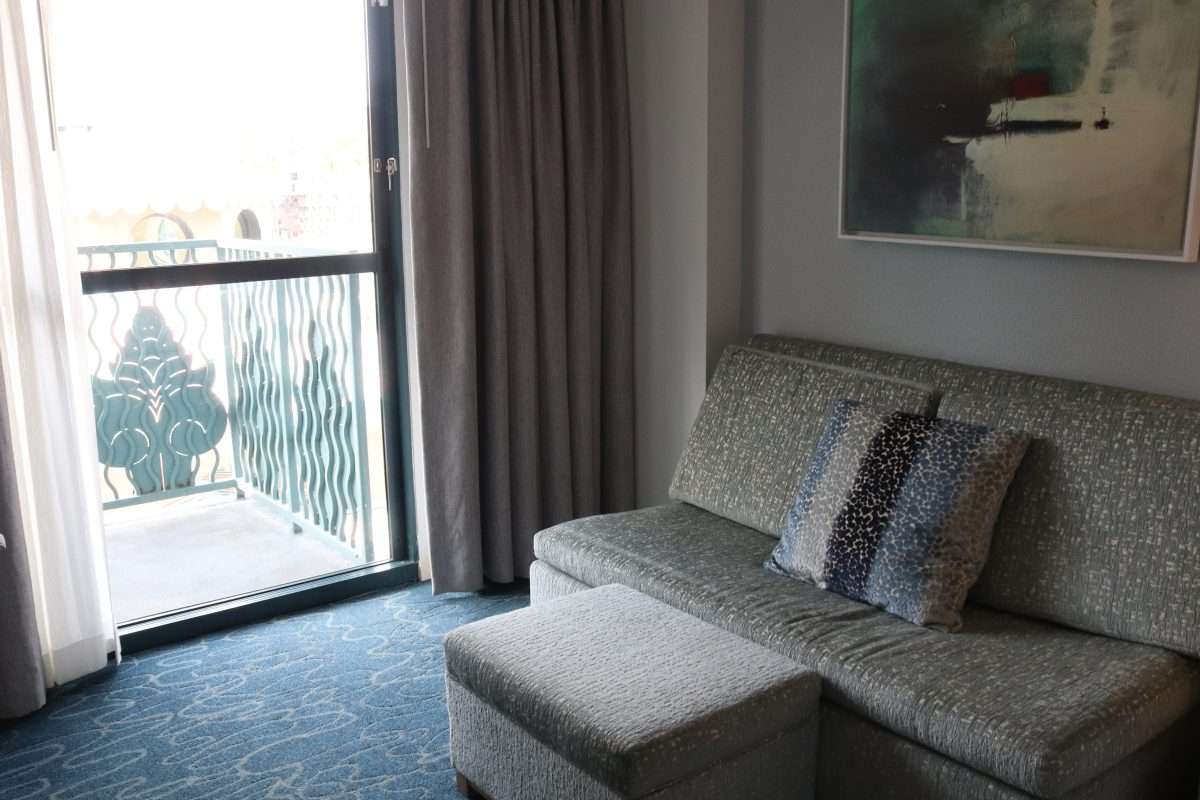 The rooms at the Swan are pretty similar to those at The Dolphin with a few differences.  In contrast to the 2-bed standard rooms at The Dolphin, they have queen beds instead of double beds. You will find Westin’s famous Heavenly bed at The Swan as well and the rooms at the Swan also have a small couch. They have the option for resort views and balconies at an additional cost.

Comparing The Swan and Dolphin Hotels

Okay, so now let’s get to the real point of this post! If you’re trying to decide between these two resorts, know that for the most part, they are very much alike. But you will also see differences in atmosphere and prices.

Are The Disney Dolphin and the Disney Swan Hotel the Same Resort?

No, they are not the same! While they do share most of the same perks, they do have small differences, and well, they just feel different.

The Disney Swan and Dolphin are located right across from one another right off of the Boardwalk; so although they may be a little different, they share our favorite quality of these hotels in their location.  They both offer the same perks as official Walt Disney World resorts and can be linked to your My Disney Experience account.

And as we mentioned before, they are both under the Marriot Bonvoy loyalty program, so they offer similar perks and will both earn you points toward the hotel program and points can also be redeemed at both hotels as well.

They both offer the same transportation options; including buses to and from the Parks, transportation via the ferry boat, and walking access to the Skyliner, Epcot, and Hollywood Studios.

Both the Swan and Dolphin share pools and the sandy beach at The Dolphin is available to everyone. And both resorts have a fitness center inside as well.

What are the differences between The Dolphin and The Swan?

The biggest difference, in our opinion, between The Dolphin and The Swan is the atmosphere which we talked about a little bit before. Aside from that, important things to know include size and cost.  The Dolphin, since it is larger, is also the home to laundry facilities for both resorts, Mandara Spa, the kids club, and the 24-hour convenience store, Picabu. All of these amenities are available to guests at both resorts.

The Dolphin is almost twice the size of The Swan. While that may not seem like a big deal, we like to mention it. Size matters here for a couple of reasons and again it’s really mostly about personal preference. If you love a big, high-energy hotel, then The Dolphin is where that’s at. And if you prefer the smaller, personal feel of a boutique resort, The Swan is going to be a better match for you.

Size is also important here because most of the time, The Dolphin will usually have more availability because it has more rooms; and more available rooms usually mean less money. This isn’t always the case, and you can definitely find a great deal at The Swan, but more often than not, The Dolphin will be the less expensive option between the two.  If you’re using Marriott Bonvoy points, both are tiered at a level 6 and cost the same amount of points to stay on property.

Since The Dolphin is larger and does have more rooms to fill, it’s usually easier to find a room through a third party there too. We’ve talked about this before and you can read about it here.

Should You Stay at the Disney Dolphin OR Swan?

You really can’t go wrong with either option! If you’re looking for larger beds and somewhere to come back and relax after a long Park day, the Swan is where you’ll want to stay. If you’re looking for a more fun atmosphere with high energy, The Dolphin is for you. Both resorts are a great choice at a moderate price. 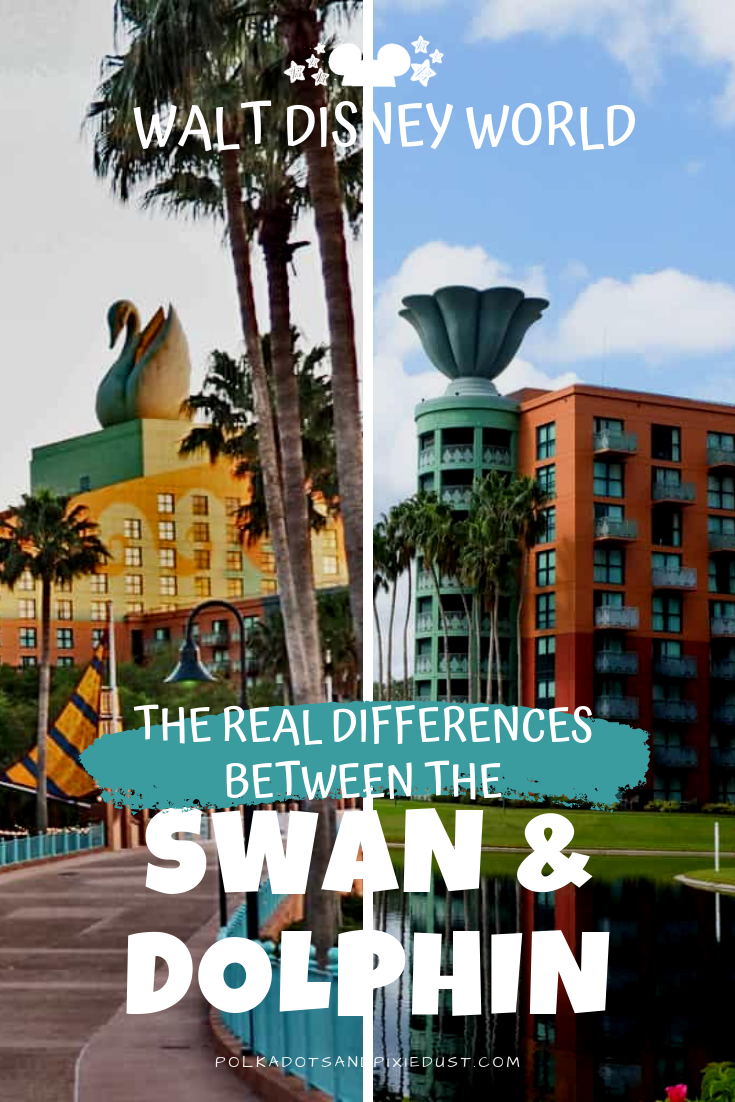 What’s New for the Festival of Holidays at Disney World?
The Best Disney Christmas Movies on Disney Plus