When we are traveling to Walt Disney World, we know there’s going to be coffee involved…. and lots of it! So when we heard that Joffrey’s Coffee Company, the official coffee creators for Walt Disney World and Disneyland, were offering up a series of fun Coffee and Donut pairings for the Festival of the Arts, we put it at the very top of our to-do list.

But why stop there? A coffee crawl can be great any ‘ol time! And when we found out they made a special latte to honor the Disney Skyliner, we knew an even bigger list was in order. We’ll be adding all things regarding Joffrey’s Coffee at Disney here. From favorite seasonal flavors to festival specialty coffees and even Joffrey’s coffees you can make at home! And if you need, even more, check out all the places to find coffee at Walt Disney World. 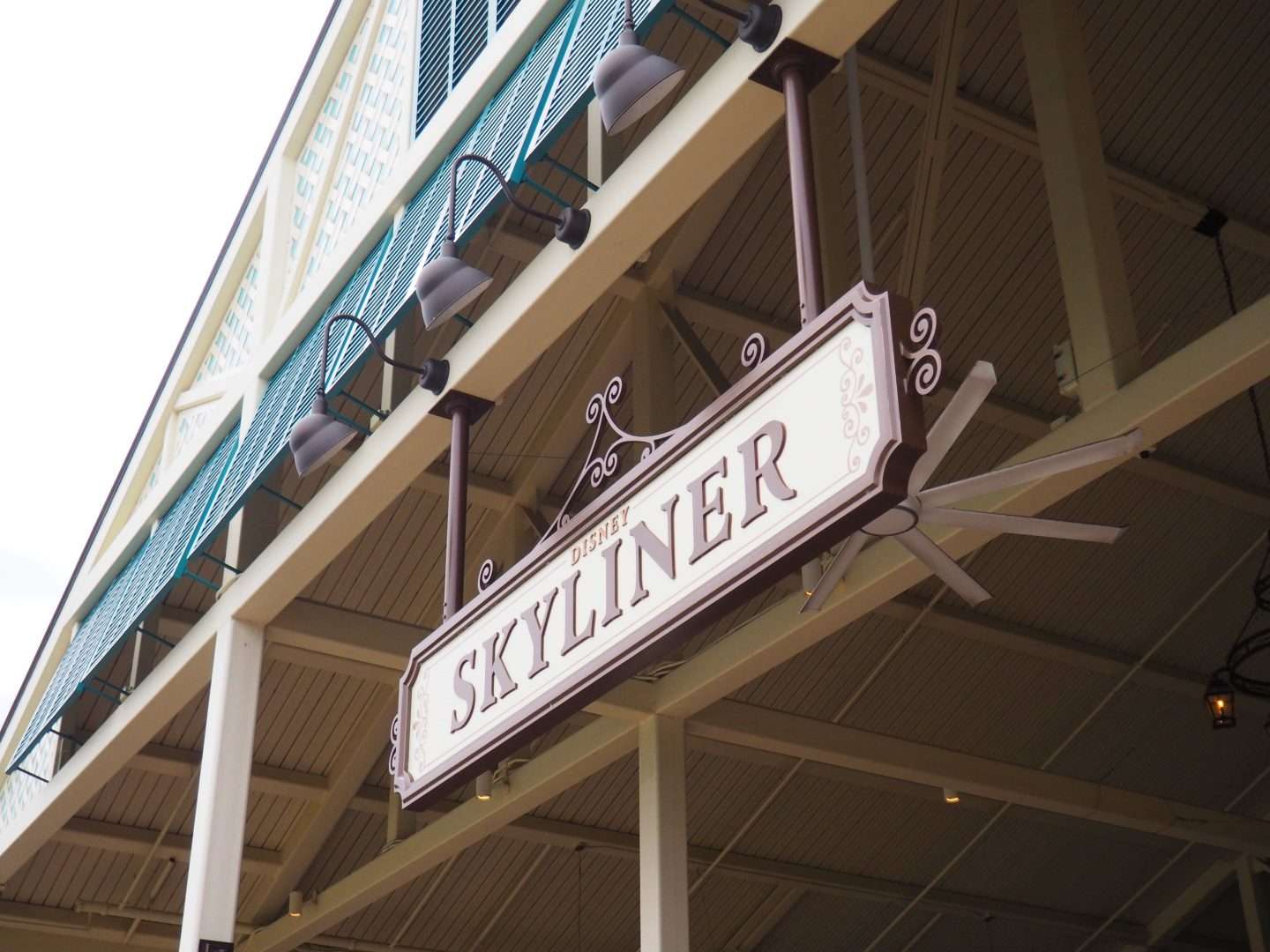 Where Can you Find Joffrey’s Coffee at Walt Disney World?

As the official coffee provider across Walt Disney World parks, Joffrey’s can be found across Disney Parks. Check out all locations below and Joffrey’s Coffee options online too.

This new coffee at Joffrey’s can be found at the Disney Skyliner Station at Caribbean Beach Resort! This is a caramel toffee and dark chocolate coffee topped with cloud foam. Not too sweet and a perfect coffee to sip while floating through the air above Disney Parks to your next destination. We love stopping at this station for a Disney day without tickets on the Skyliner Resort Crawl. Or if we’re heading to Topolino Terrace at Disney’s Riviera Resort for the Mickey a la Art Breakfast! 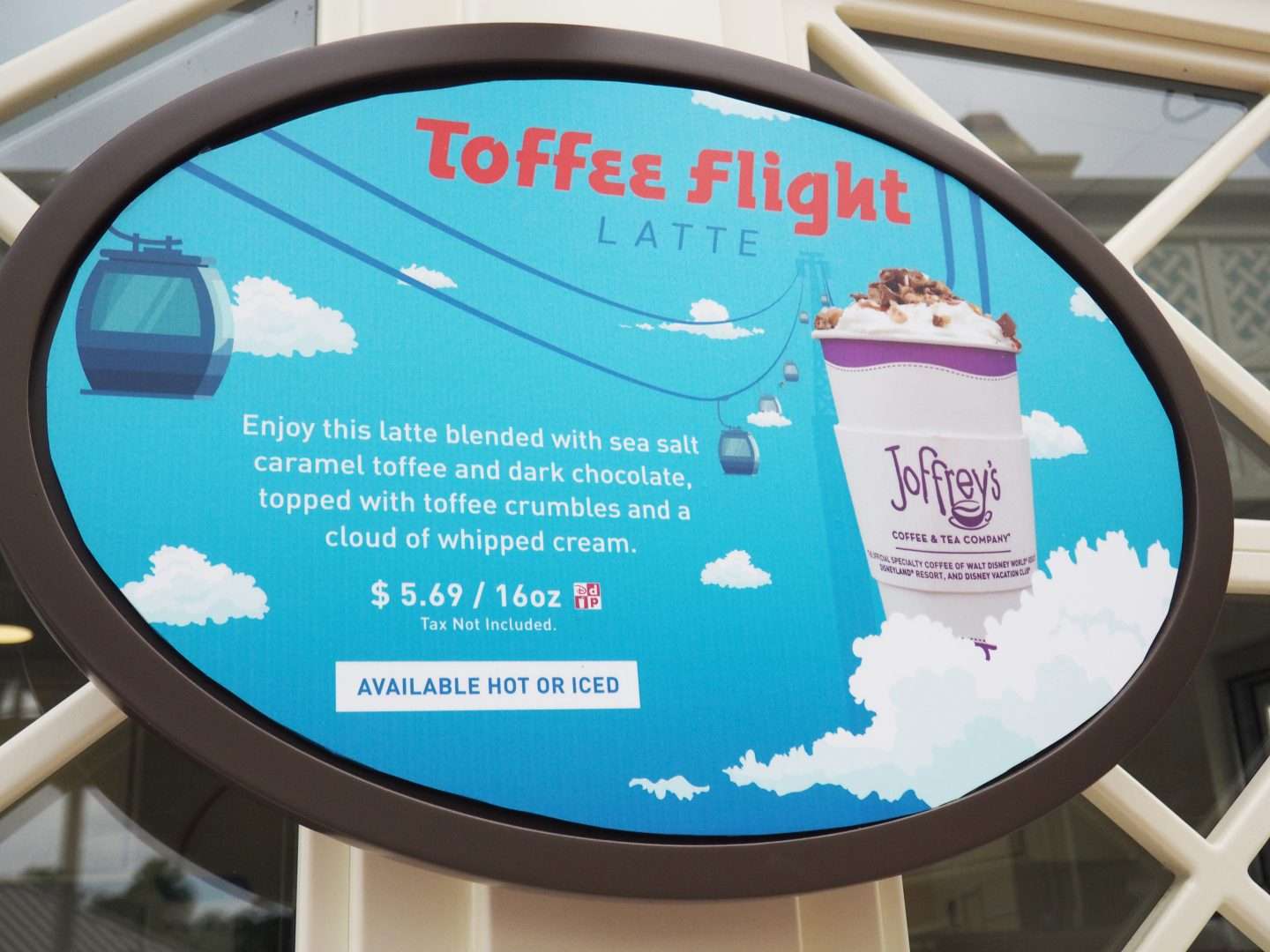 While EPCOT has a coffee station at the monorail entrance we tend to reserve that for park hopping days or any time we’re leaving the park and need a pick me up. So for the most part our Coffee Crawl at EPCOT consists of the coffee carts inside the park. Most times throughout the year, the cart selections are the same. The season for Valentine’s Day, or Christmas, or Halloween; you get the idea. BUT, for EPCOT Festivals, the cart selections change across the 4 carts. Hence, the crawl!

Any Joffrey’s Cart Crawl in EPCOT consists of four stops. You can do this in any order, and it will really just depend on where you enter the World Showcase from. You can do a Joffrey’s Coffee Crawl at ANY Disney festival and the stops will always be the same, though the coffees will change! 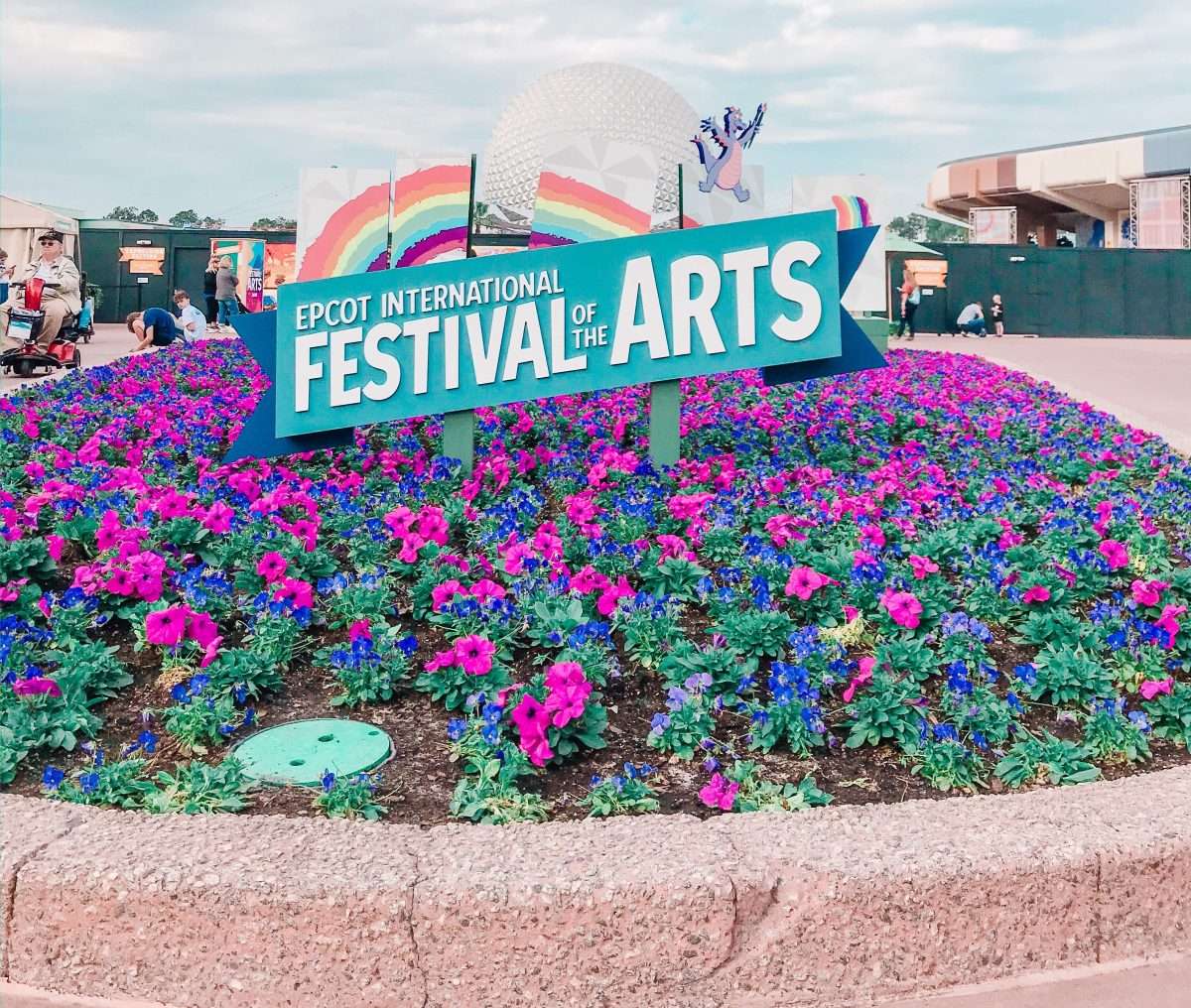 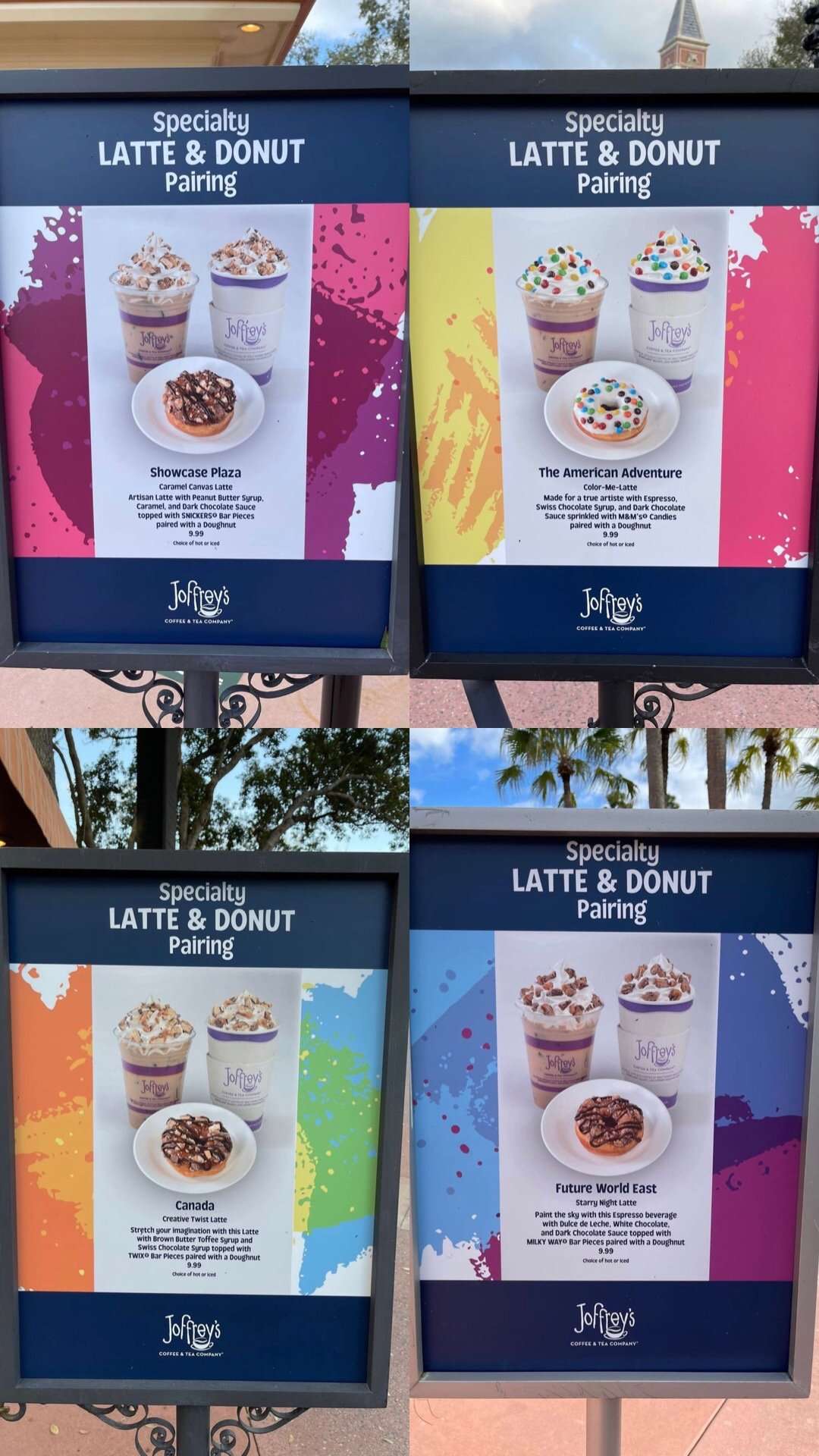 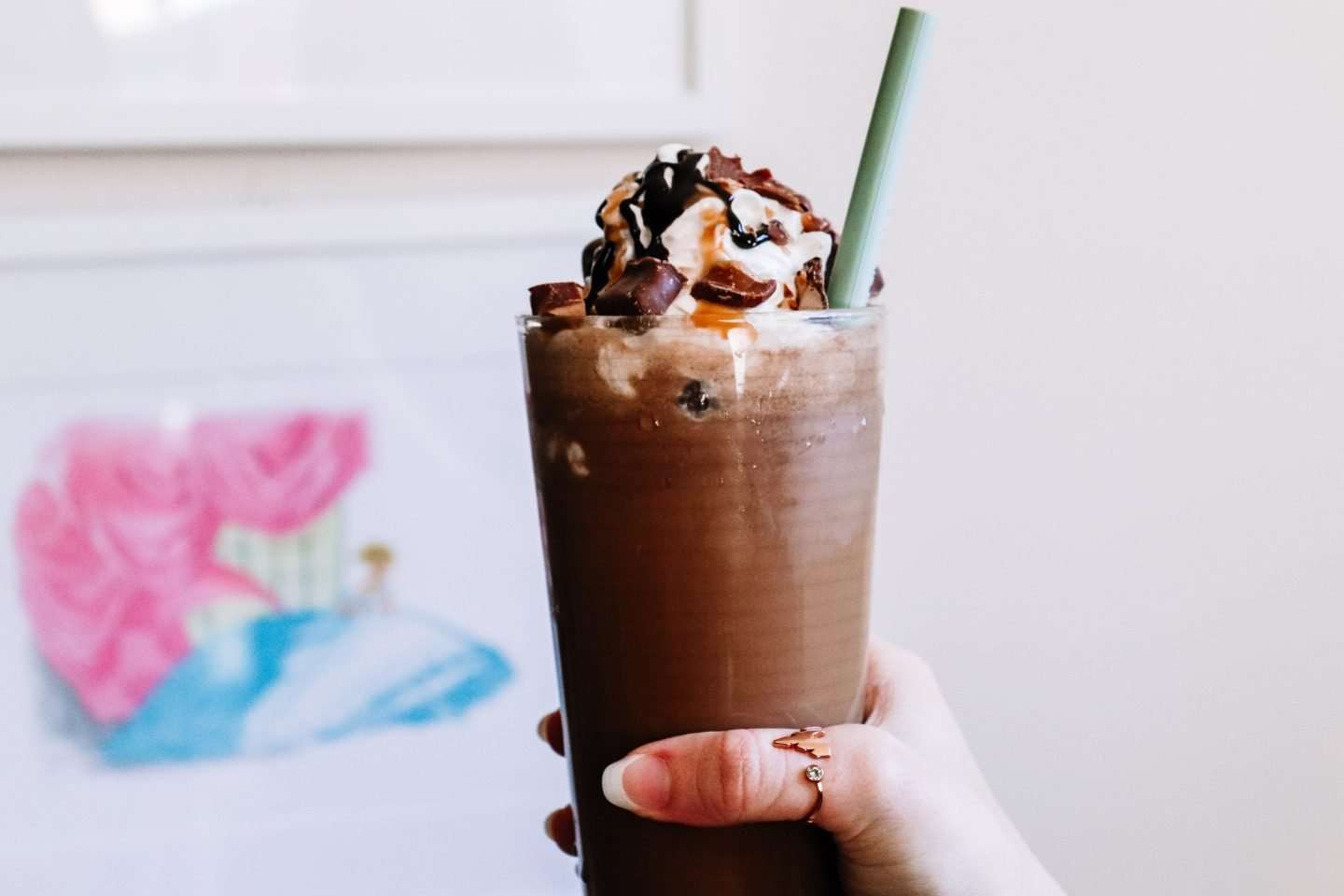 Joffrey’s Coffee Crawl at the Festival of the Arts

Joffrey’s Coffee Company is always sharing fun new coffees for each season over at Walt Disney World. BUT…since we’re staying home and staying safe this year, we decided to host our own little Joffrey’s Coffee Crawl at home.  Here are the four coffees that can be found at the Festival of the Arts in 2021. 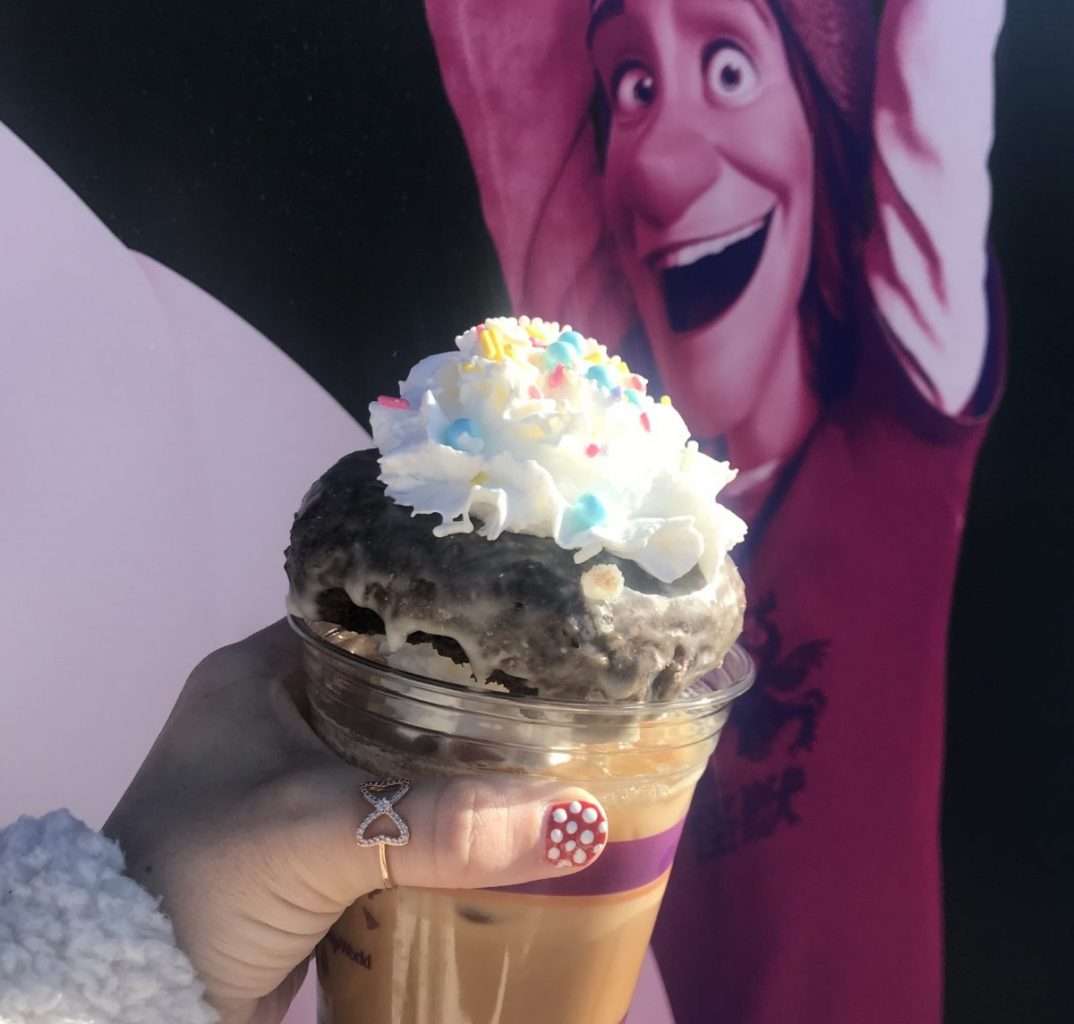 Joffrey’s Coffees for Festival of the Arts 2020

The Festival of the Arts is in full swing and we are happy to say it is bigger and better than ever. We just love watching this new festival grow every year. From artwork to entertainment to artfully crafted foods, this festival is really starting to shine and topping the list as many people’s favorite festivals at Epcot.

Ok, but enough about that and back to the matter at hand. Joffrey’s Coffee Crawl at the Festival of the Arts. Is that what it’s called? Not sure, but that’s what we are calling it, because why not, right?

Joffrey’s in Future World East Can be found near Mission Space and Mouse Gear in Epcot. For the Festival of the Arts, they offer Modern Pairing. This consists of Coconut Iced Latte topped with a chocolate donut with whipped cream and sprinkles.

This one was just ok for us. The coconut flavor was a little too strong for us and the donut was a little bit dry. On Instagram, we rated this as our least favorite, but if you loved this one, we’d love to hear about it. 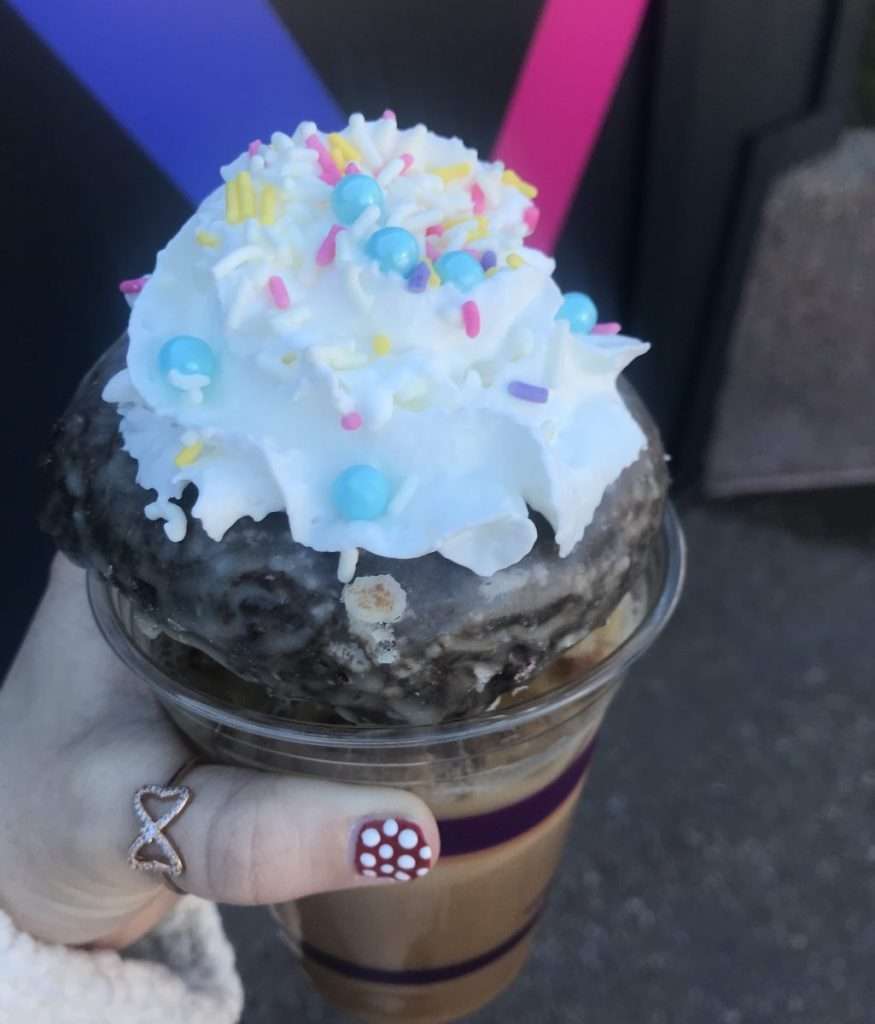 Joffrey’s at Showcase Plaza, which is located near the entrance of World Showcase has the Renaissance Pairing. The Renaissance Pairing includes an Iced Mocha Latte served with a Glazed donut. We loved the iced Mocha in this pairing but were a little disappointed it was a cake donut and not a yeast or risen donut.

It’s a small thing to pick at, but when you’re trying to rate coffee and donut pairings, it’s things like this that will make you or break you. Obviously, I’m kidding, but I mean… maybe I’m not. 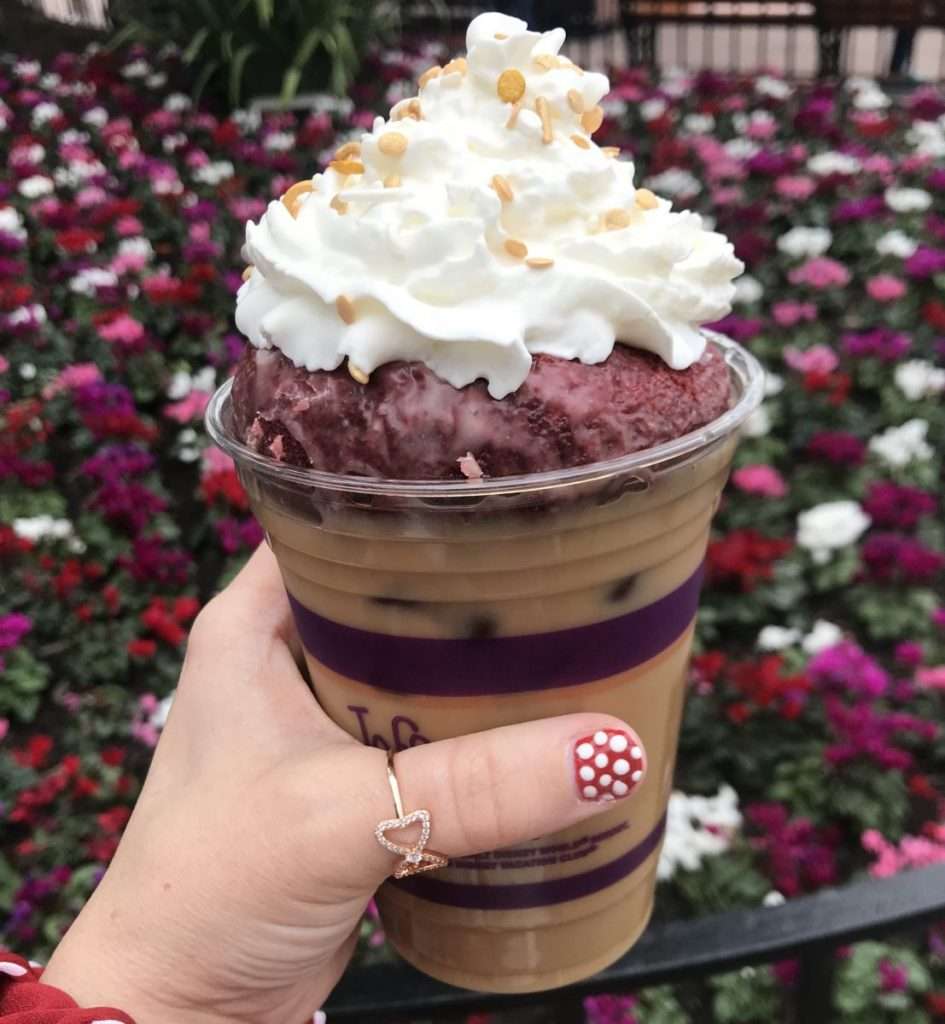 Joffrey’s in The American Adventure offers Baroque Pairing. This pairing offers an Iced White Mocha Latte topped with a red velvet donut. We sometimes get nervous when it comes to White Mocha because a lot of times it’s too sweet, but Joffrey’s did a great job here balancing out the coffee flavor with white mocha. Not too sweet and well it was kinda perfect. The red velvet donut was delicious and a perfect pairing to the coffee.

The Impressionism Pairing from Canada is a Blackberry Iced Latte topped with a Blueberry Donut. This one was a little tough to rate because the coffee tasted a bit more like Blackberry Tea, which is not necessarily a bad thing if you like Blackberry Tea; but could be if you’re really looking for that Coffee taste. The donut was one of our favorites of the bunch and if you like blueberry donuts, we think you’ll like this one. 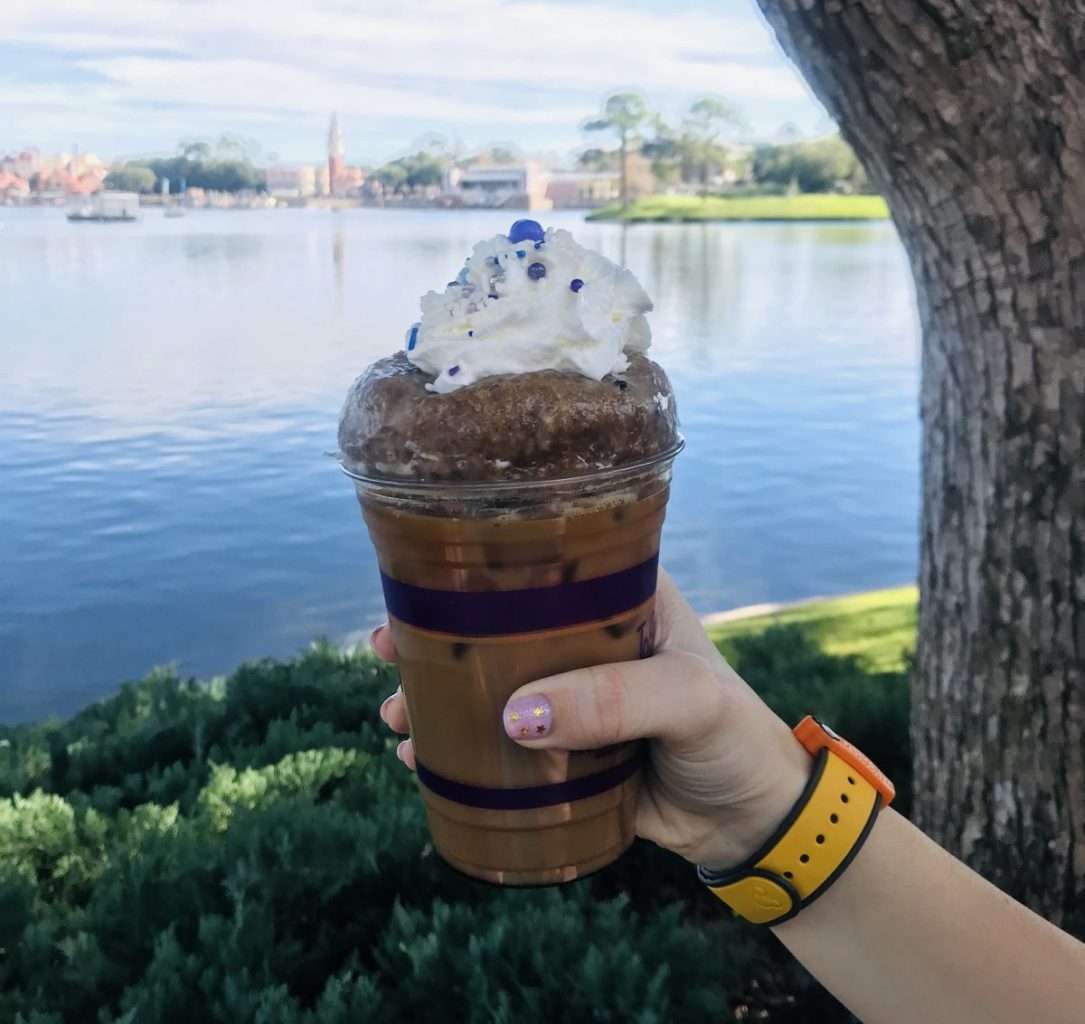 Ok, so the moment we know you’ve all been waiting for, how did these rank? Well, we will tell you! Our favorite pairing was the Baroque Pairing from The American Adventure. This seemed to be pretty much across the board when we talked about it on Instagram and we really thought the pairing was just a hit.

In the second place, we would have to pick the Renaissance Pairing from Showcase Plaza. Although we were a little disappointed in the donut, it’s really just a matter of preference and the coffee was by far our second favorite.

We think the Impressionism Pairing from Canada deserves a third place, even if the coffee did fall a little flat. The flavors weren’t necessarily bad, just not what we had expected. And the donut was good enough to carry this one though.

And that would leave the Modern Pairing in last place for us. The coconut flavor was just too strong, and almost so much that we didn’t even finish drinking it. The chocolate donut was also somewhat of a disappointment, and ultimately the combination was just our least favorite.

Keep in mind, as with all things, consistency is always a factor when it comes to anything at Walt Disney World, so it’s very possible that you could try any of these and have completely different experiences than we did! And hey if you love a certain flavor maybe more than we do, don’t let us sway your opinion to try them!

Each pairing will cost you $8.99 and there is a discount for Annual Passholders as well as DVC members. Joffrey’s offers Almond Milk as a dairy-free alternative, and that will add another COST to your total.

We hope you guys have enjoyed this post! And if you make it out to the Festival of Arts this year, we’d love to know if you guys tried any of these and which are your favorites! 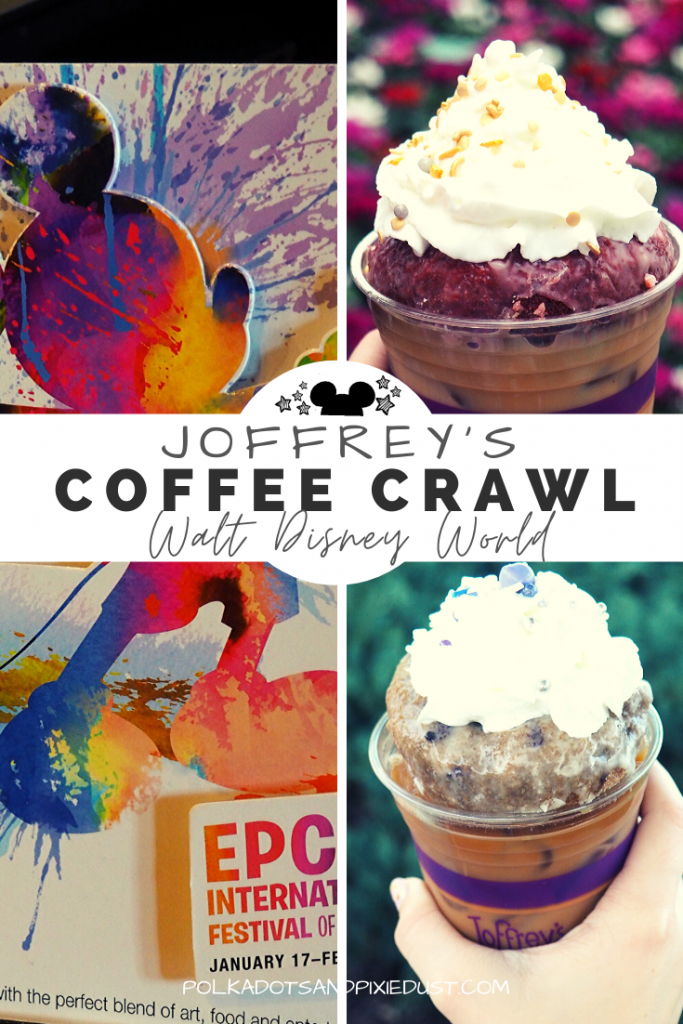 What’s New at Disneyland in 2022?
Club runDisney Everything You Need to Know