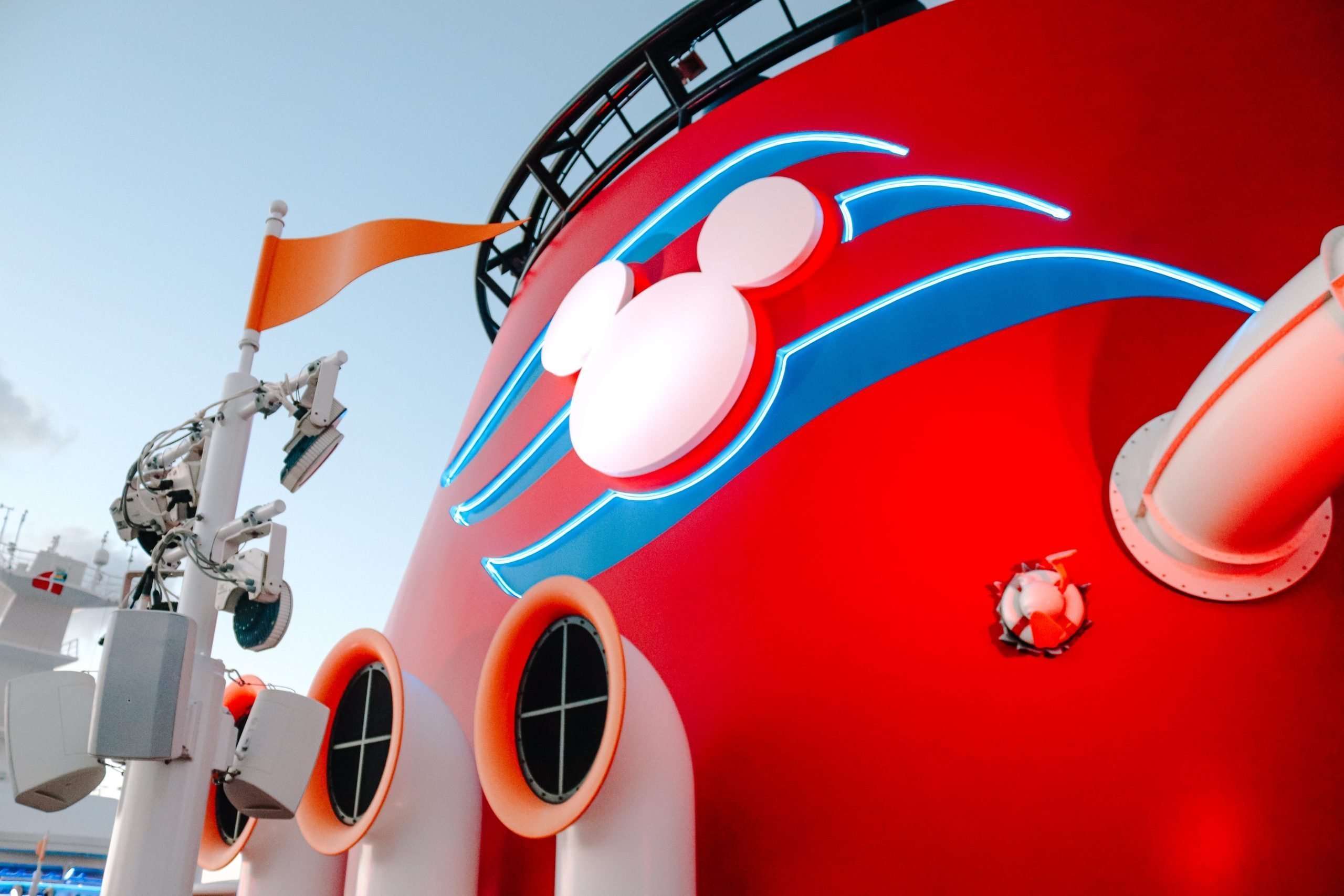 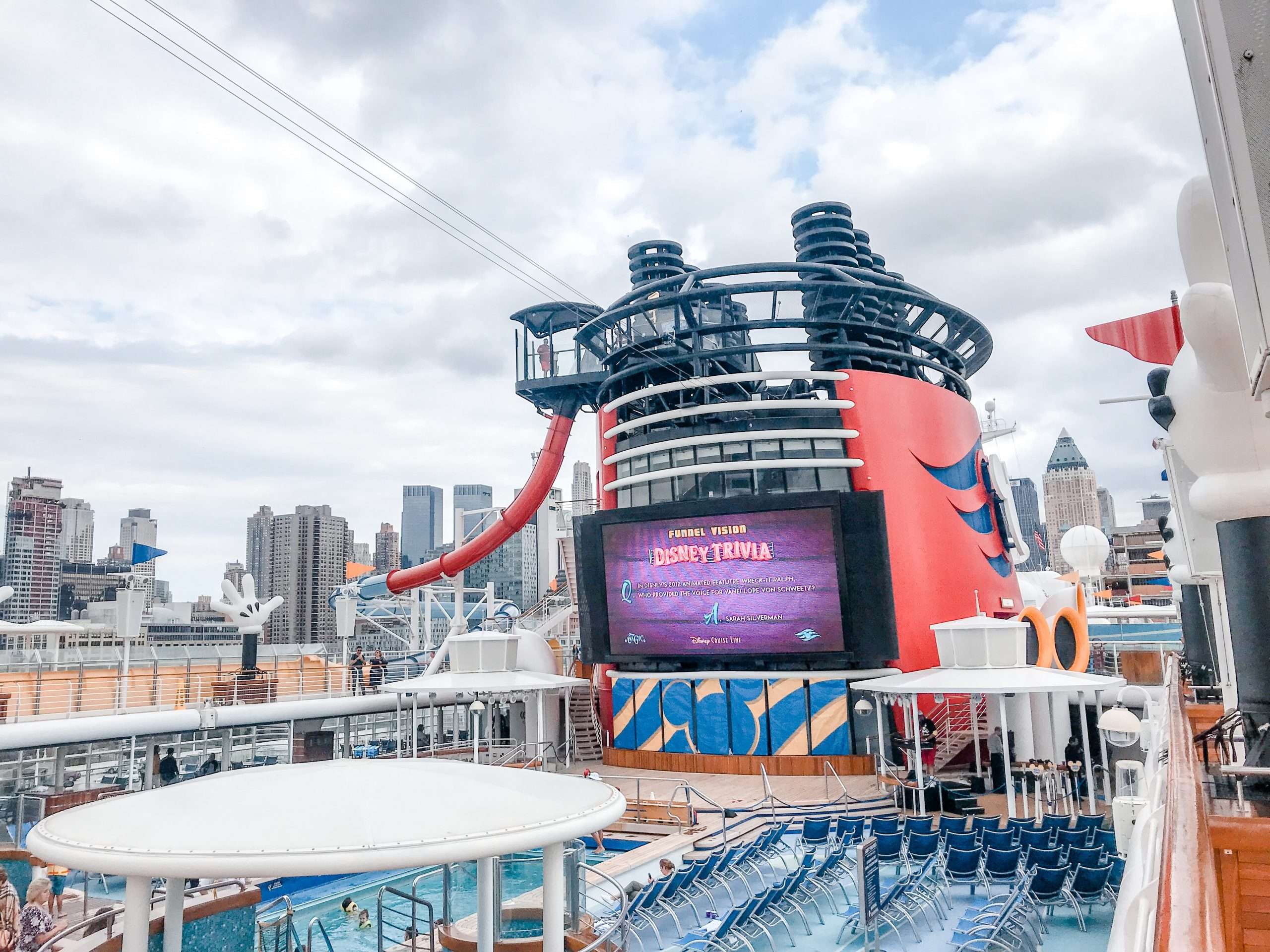 All of the Disney Cruise Line Ships

What is the difference between the Disney Cruise Line Ships?

There are a few differences that make each ship unique. Itineraries, restaurants, and sizes are just a few of the things that distinguish one ship from another. Each has its own design and layout and its own amenities. And sometimes, something like an itinerary can completely decide what ship you’ll be sailing on.  We will go more into detail below! 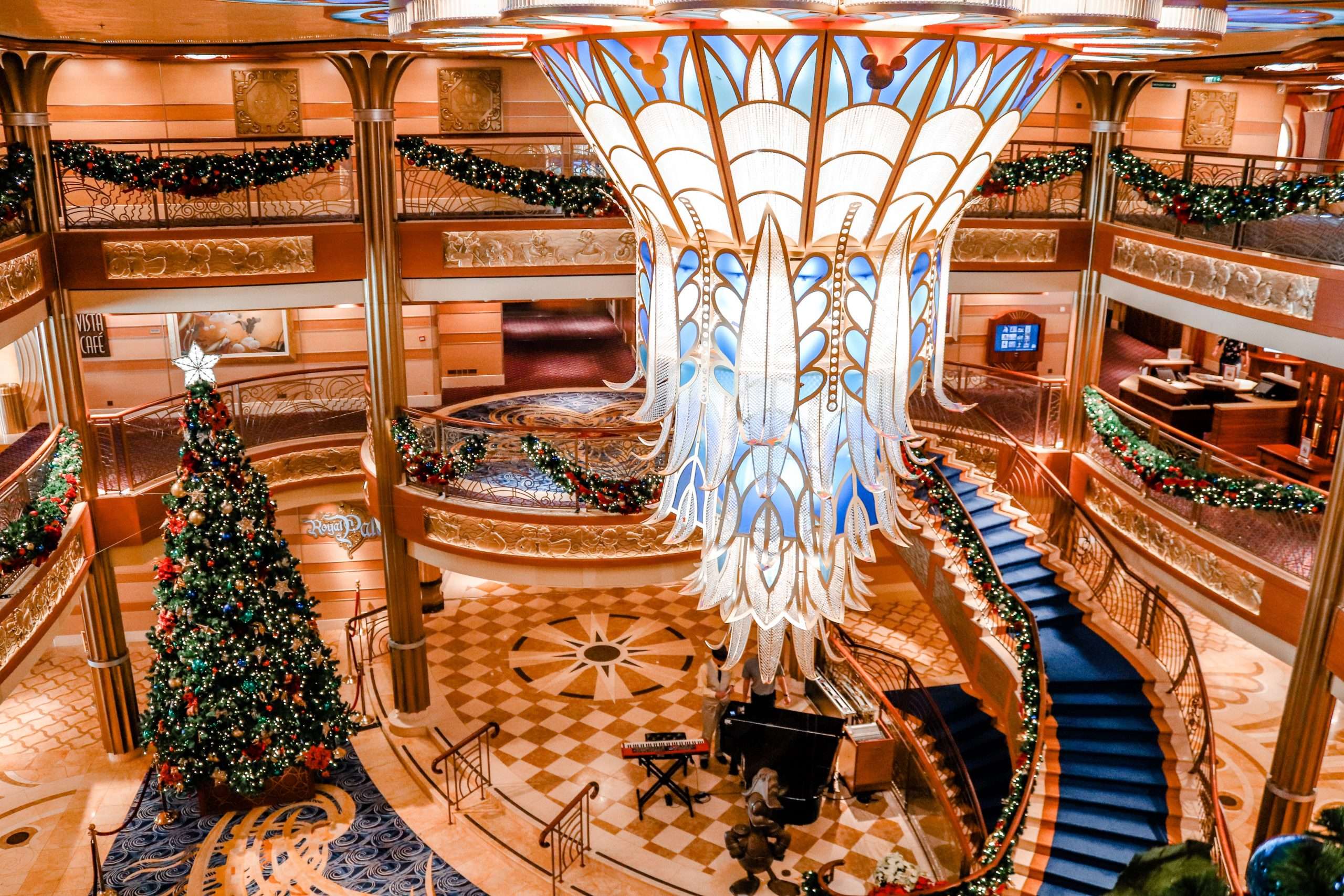 And each Disney Cruise ship has a special character on the stern, which is a fun little detail we always love looking for. On the Disney Dream, the stern character is Sorcerer Mickey.  For those who are a bit more daring, the Aquaduck onboard the Disney Dream offers a water coaster that extends over the side of the ship!

The decor on the Disney Dream is just stunning. With bold colors and an art deco aesthetic, this ship is really a wonder to see! We love the chandelier as you enter the ship.  Deck plans for the Disney Dream can be found here. 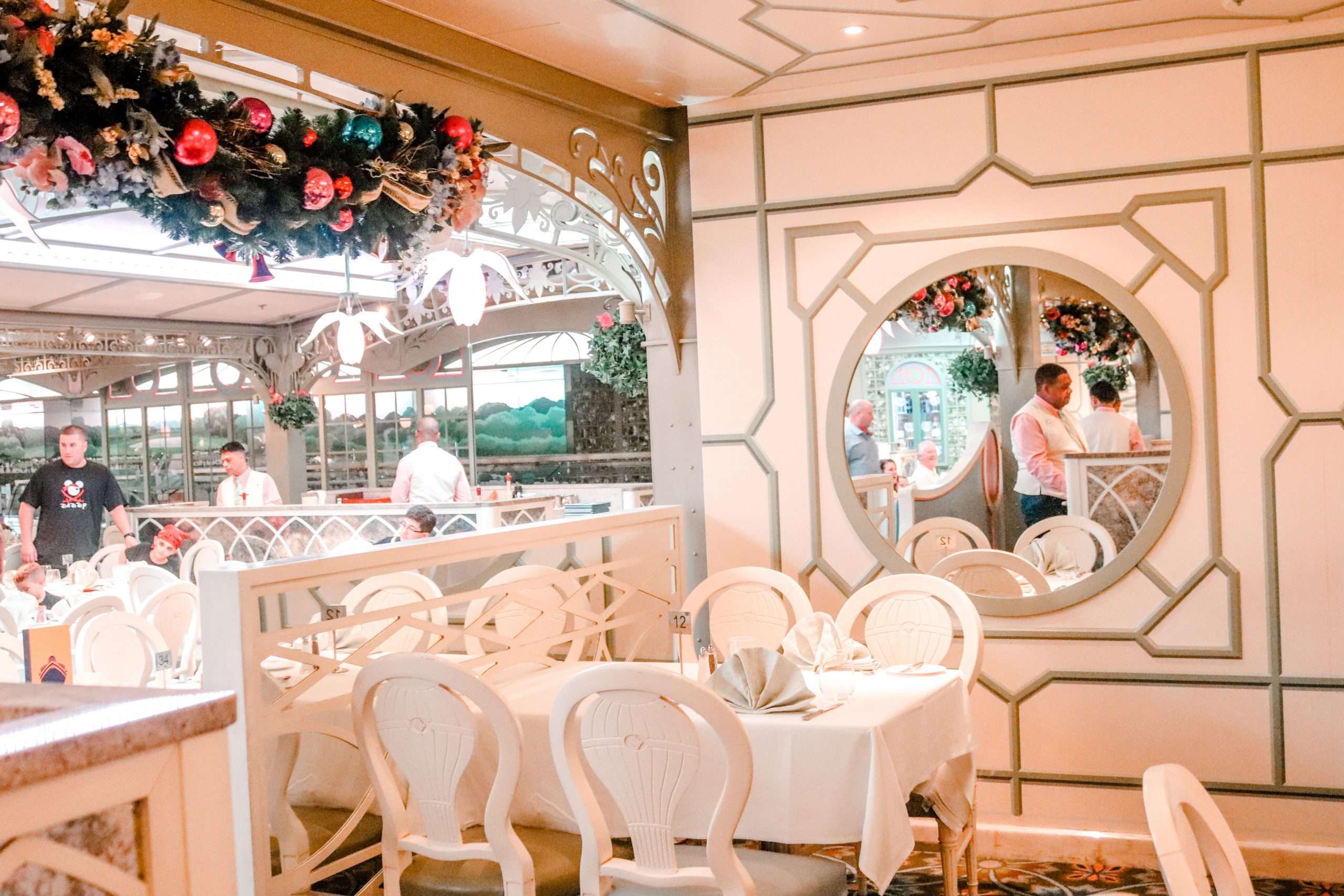 The Disney Dream also has the benefit of offering both Palo and Remy, which are considered some of the best dining experiences at sea. These are both adult-only, require a reservation, and are available at an extra price.

Casual dining options onboard the Disney Dream include Cabanas, Cove Cafe, Preludes, Vista Cafe, Flo’s Cafe, and of course room service, which is available 24 hours a day. For a sweet treat while sailing, EyeScream Treats, Frozone Treats, and Venellope’s Sweets and Treats all offer goodies to satisfy your sweet tooth! And there is a wide variety of bars and lounges on board the Disney Dream as well.

Shows on the Disney Dream

One of our favorite things on a Disney Cruise is the shows! These shows are incredible. Held in the Walt Disney Theatre, these shows are performed nightly and are a great way to spend your evening onboard a Disney cruise ship. Guests on the Disney Dream can look forward to Beauty and The Beast, The Golden Mickeys, and Believe.

Where does the Disney Dream sail?

Itineraries and Ports of Call can change from year to year, so it’s always best to check the Disney Cruise Line website first. But the Disney Dream generally sails to The Bahamas, the Caribbean, and Castaway Cay; and sails out of Port Canaveral Miami. You can see all of the current itineraries for the Disney Dream here.

Guests on the Disney Fantasy will notice as soon as they enter that this ship is quite grand! The sister ship to the Disney Dream, the Fantasy is the same size, with 1250 staterooms and a capacity of 4000.  In the atrium, you will find Mademoiselle Minnie Mouse and Dumbo on the stern.  The Disney Fantasy also has the AquaDuck water coaster for those who love a good thrill at sea. 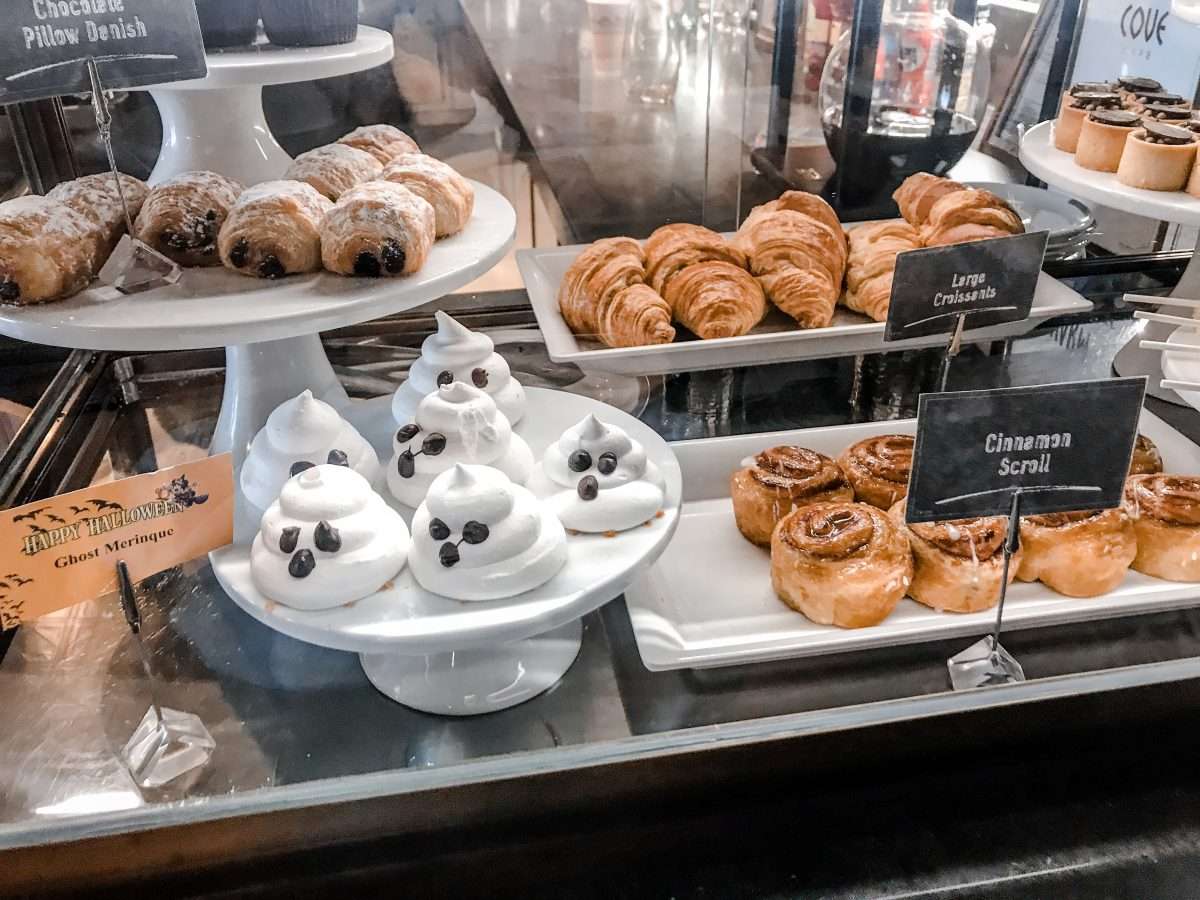 Dining on the Disney Fantasy is similar to that of the Disney Dream. Rotational dining options include Enchanted Garden, Animator’s Palate and Royal Court. For an adults-only dining experience, Palo and Remy are both available for an extra fee and require reservations.

For casual dining onboard the Disney Fantasy, Cabanas offers a buffet for breakfast and lunch. And for grab-and-go selections, Preludes, Flo’s Cafe, Cove Cafe, Vista Cafe have you covered. For sweets and treats, Sweet on You, Eye Scream and Frozone Treats will satisfy your sweet cravings.  Room service is also available 24 hours a day and most items are included in your cruise fare. A variety of bars and lounges are also available for adults.

Where does the Disney Fantasy sail? 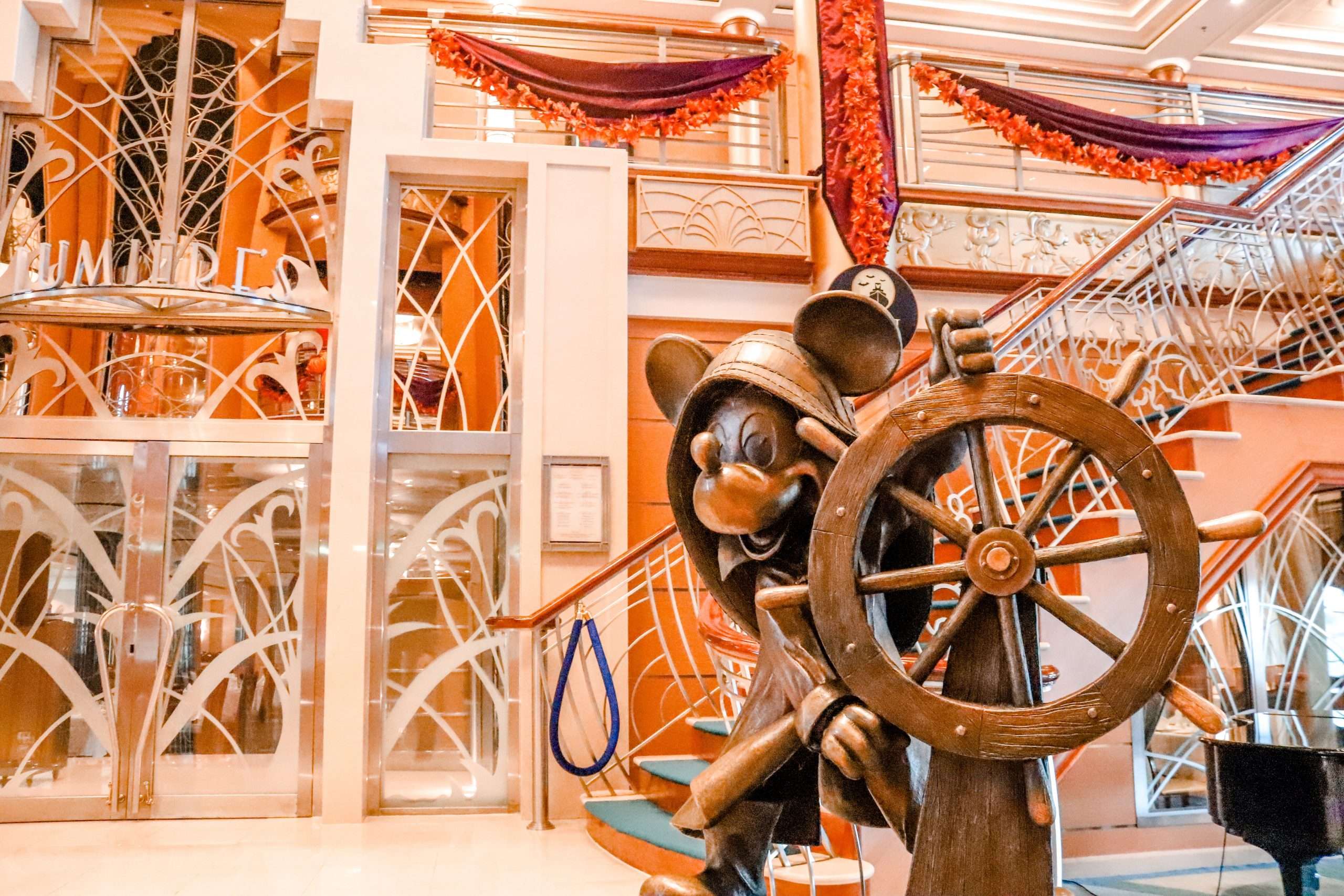 The Disney Magic is the oldest ship in the Disney Cruise Line fleet. But don’t let that scare you off! The Disney Magic has been reimagined and renovated many times since its inaugural sailing in 1998. It’s also one of the smaller Disney ships, with 877 staterooms and a capacity of 2700. The Disney Magic is the sister to ship the Disney Wonder, which is just a couple of staterooms smaller. Although these ships are smaller and generally less grand, we love the welcoming, homey atmosphere. And if you’re someone who prefers fewer crowds, either of these ships may be the one for you.

Guests can find Helmsman Captain Mickey as the statue in the atrium, and painter Goofy on the stern.  AquaDunk can be found on the Disney Magic for those looking to add some high-speed thrills to their vacation.

You can find our most recent Disney Magic photo tour here! And you can see the deck plans for the Disney Magic here. 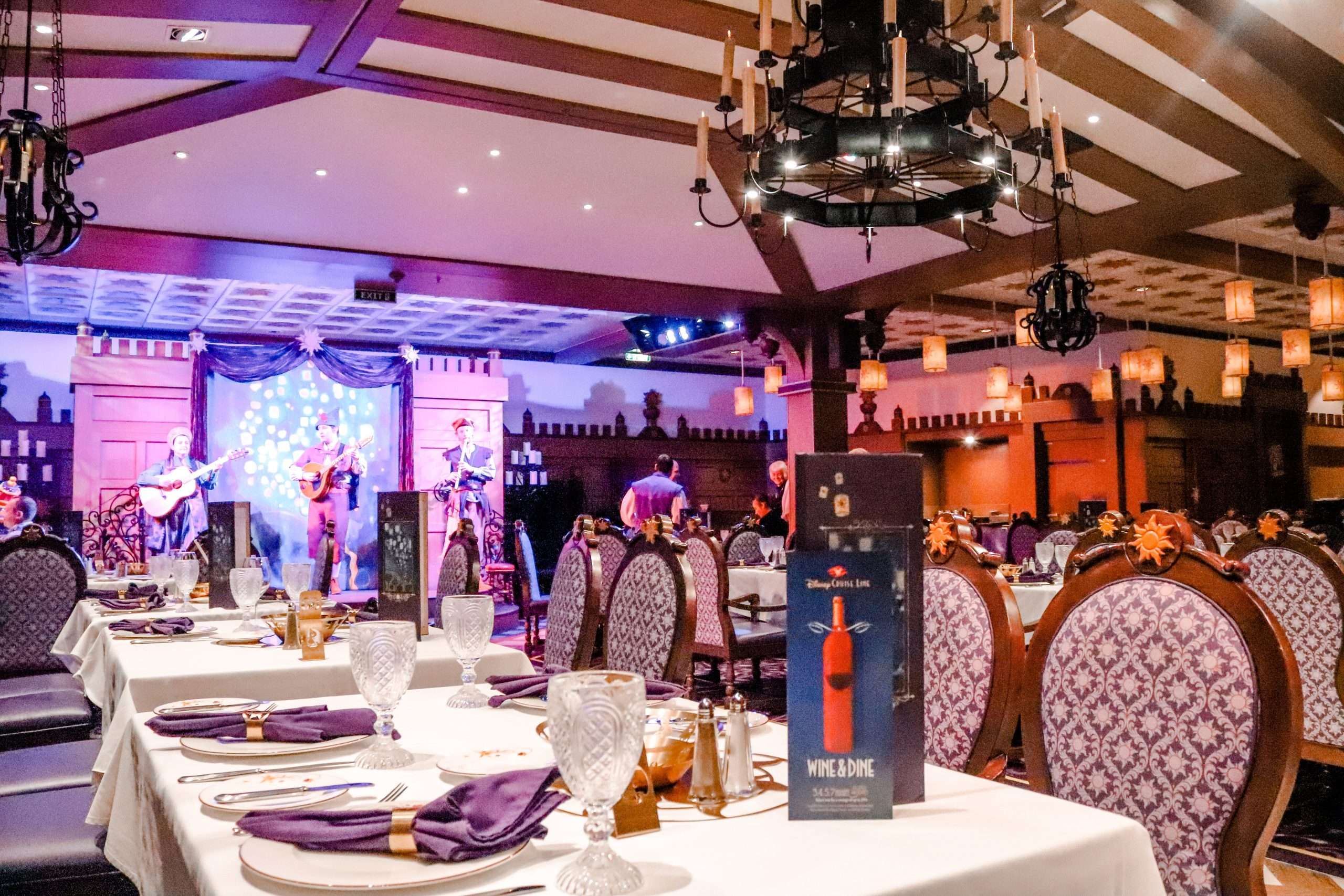 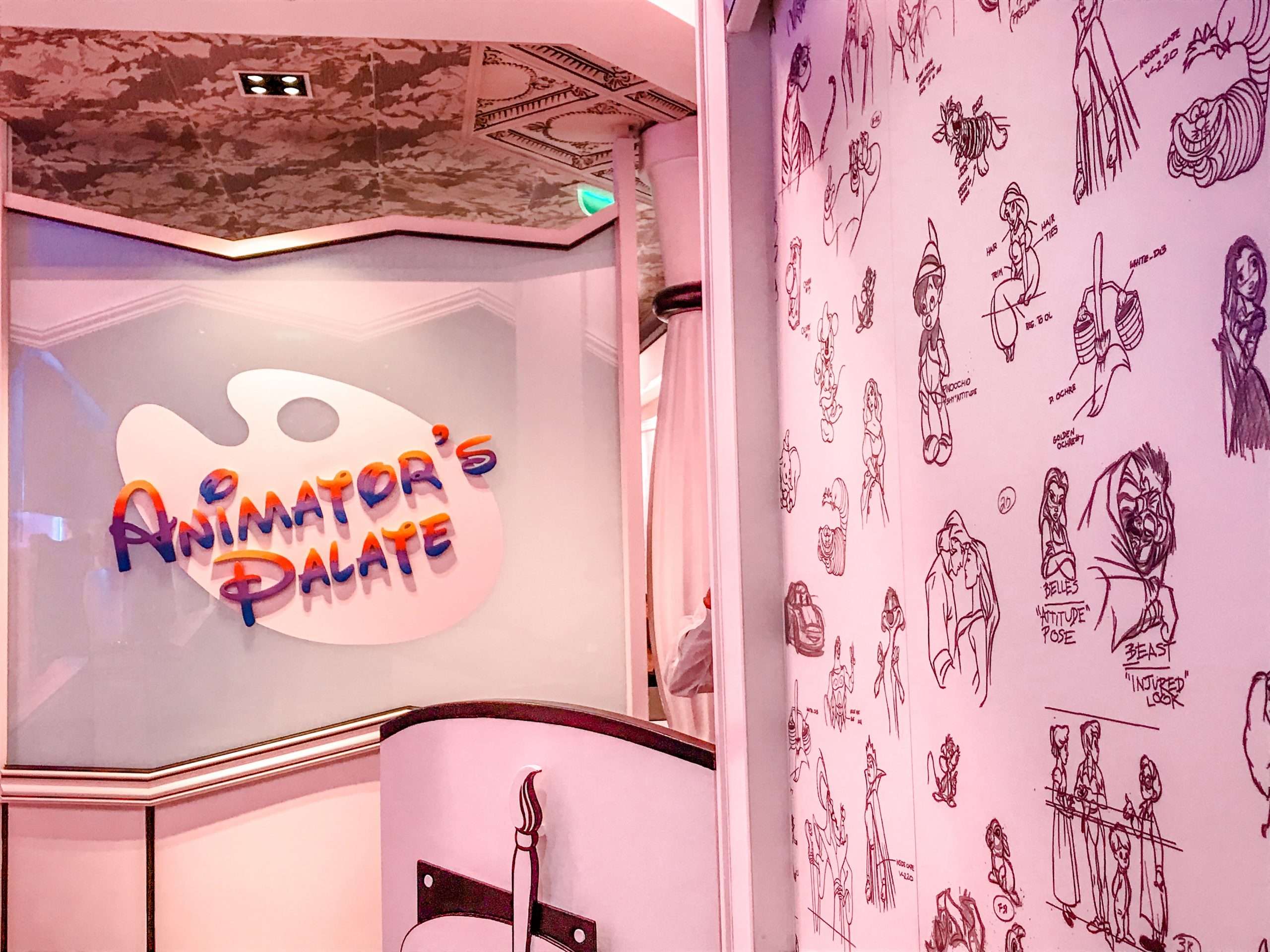 The Disney Magic may be the oldest Disney Cruise Line ship, but it has one of our favorite dining experiences! Rapunzel’s Royal Table is not only a themed dinner but an interactive show too! Rapunzel’s Royal Table is included in the rotational dining service, along with Animator’s Palate and Lumiere’s. Adult-only fine dining on the Disney Magic includes Palo, which requires a reservation and dress code.  And for casual dining options, guests on board the Disney Magic will find Cabanas, Duck In Diner, Pinocchio’s Pizzeria, Cove Cafe, and Frozone Treats. Room Service is also available 24 hours a day, with most items being included in your cruise fare.

You can read all about dining on the Disney Magic here.

Shows on the Disney Magic

Another reason Tangled fans will love this ship is the show, Tangled: The Musical can be seen here! Definitely, one of our favorite shows we’ve seen in the Walt Disney Theatre, this show is a must-see.  Along with Tangled, Twice Charmed and Disney Dreams are staples of the entertainment that can be found on Disney Magic. 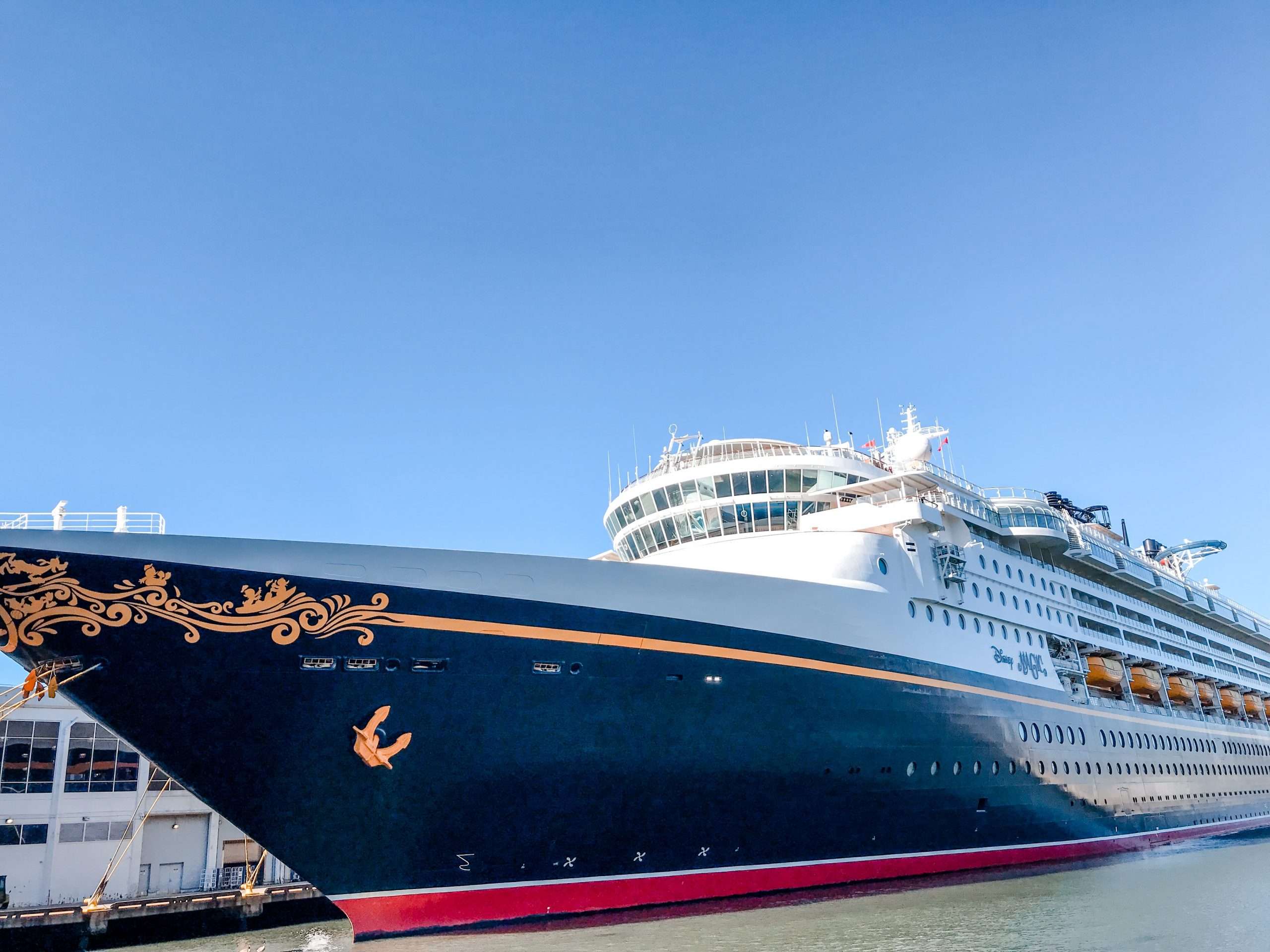 Where does the Disney Magic Sail? 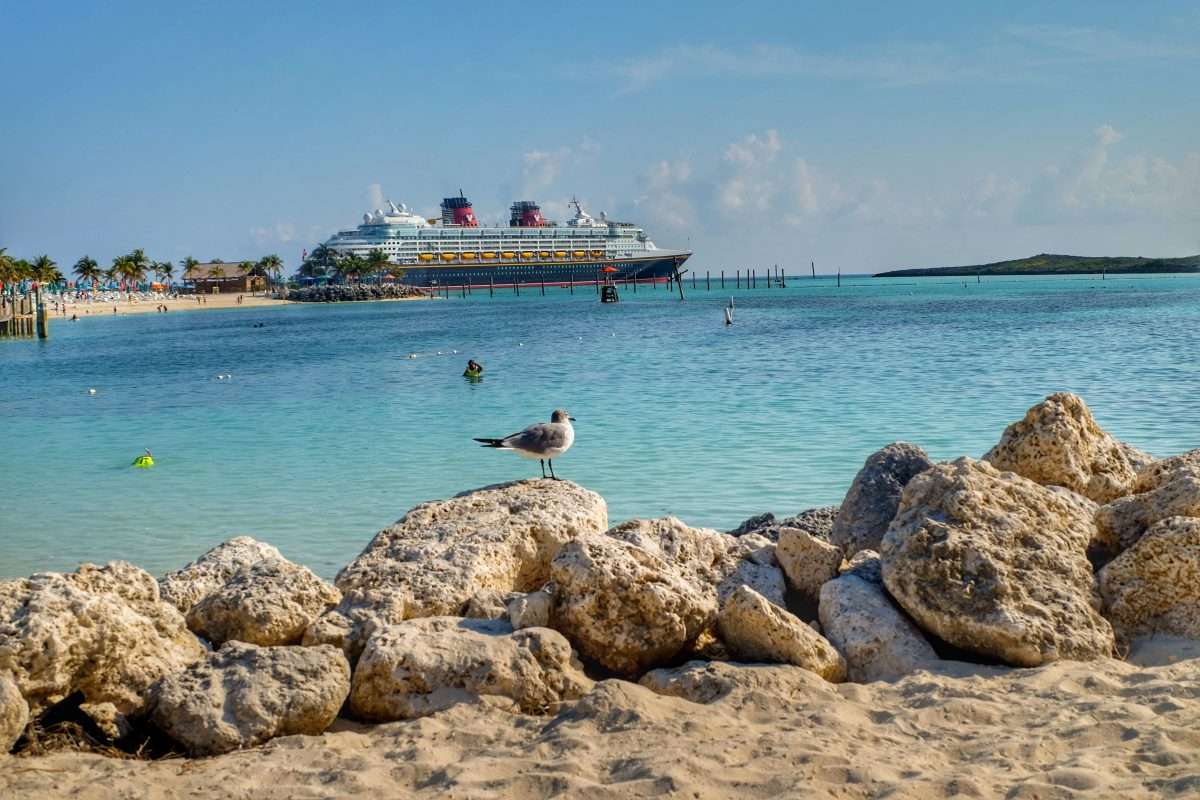 While the Disney Wonder is the same size as the Disney Magic, it has two fewer staterooms for a total of 875. Capacity remains at 2700. It is the second oldest of the Disney Cruise Line ships but has been reimagined and refurbished to feel fresh and new.  A gold Ariel statue graces the main atrium and Donald Duck graces the stern.

Deck plans for the Disney Wonder can be seen here. 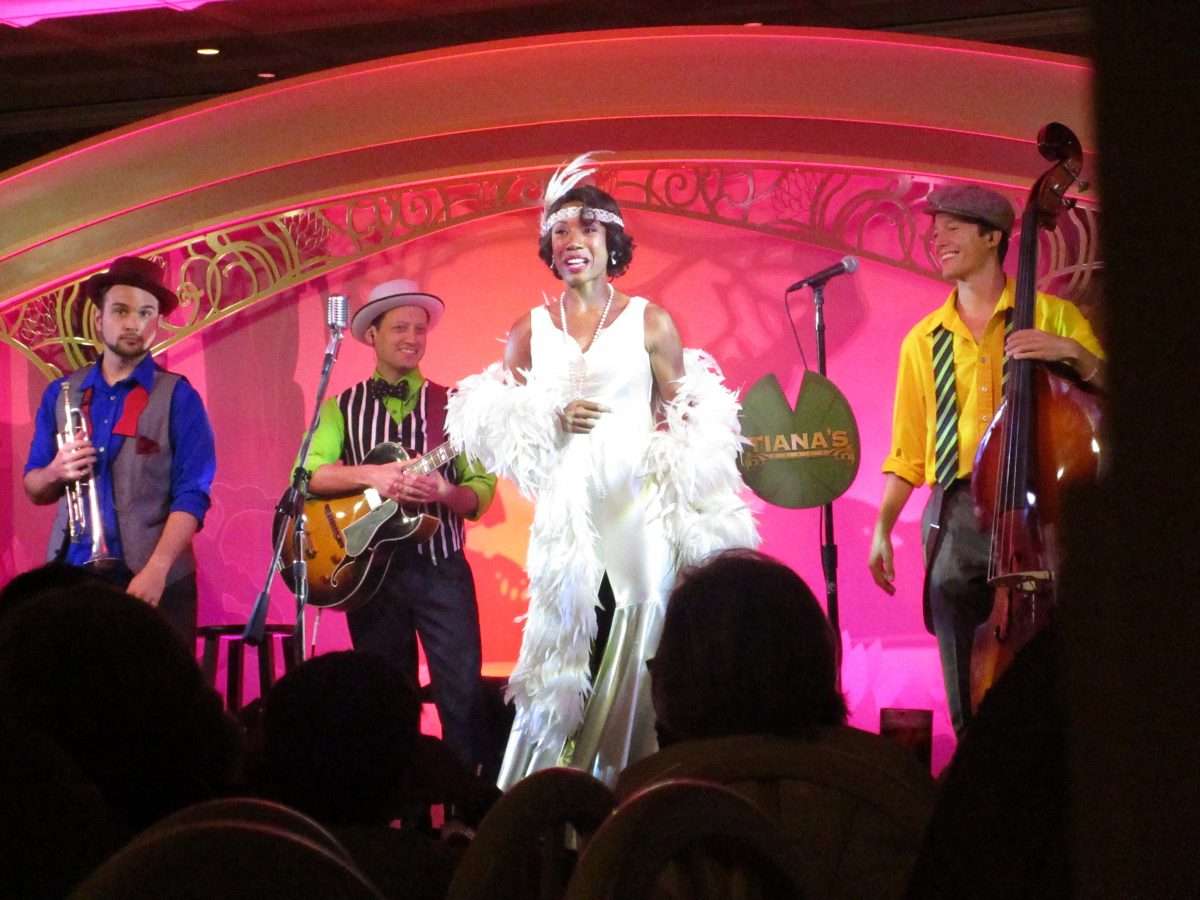 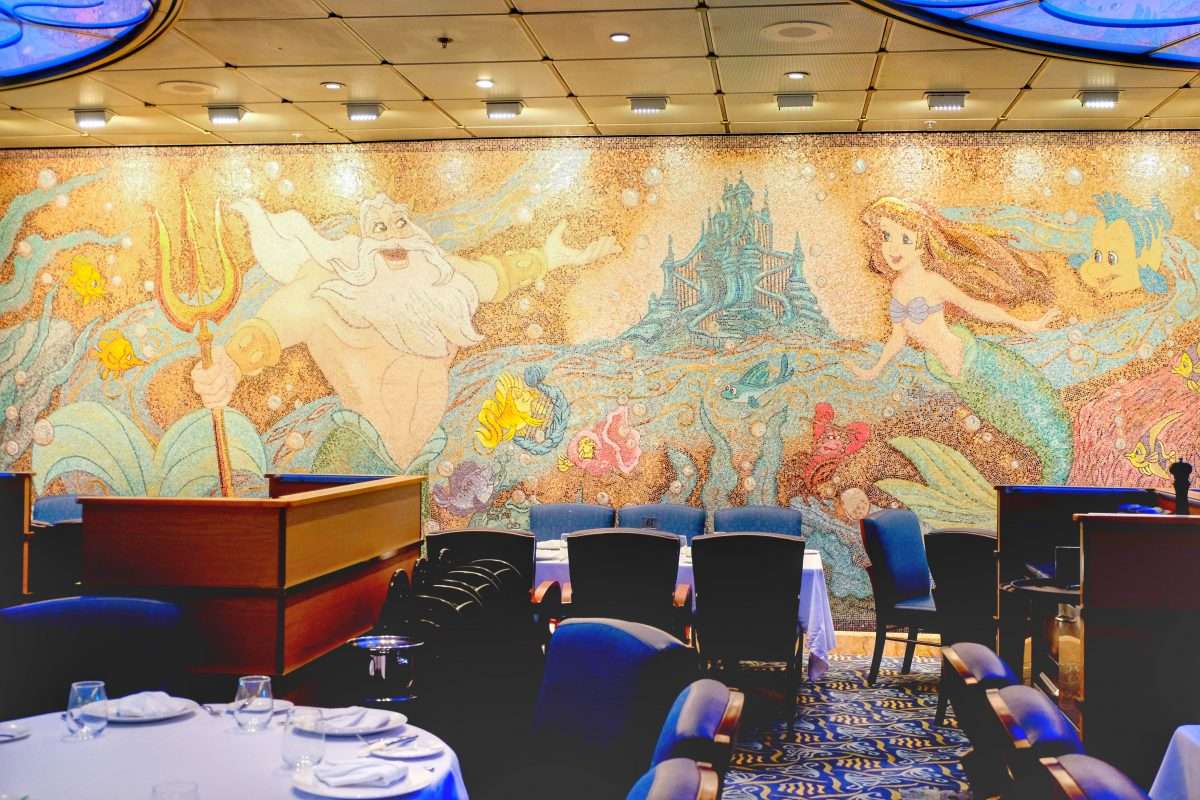 Like Disney Magic, the Disney Wonder has one of the best dining experiences you can find on a Disney Cruise Ship, in our opinion. Tiana’s Place offers dinner and a show with Tiana herself! Tiana’s Place is part of Disney Cruise Line’s rotational dining onboard the Disney Wonder and is included with the cost of your cruise. Animator’s Palate and Triton’s are also part of the table service, rotational dining restaurants.  Adult-only dining on the Disney Wonder includes Palo, which requires a reservation and comes at an additional charge.  Casual options on the Disney Wonder include Pinnochio’s Pizzeria, Pete’s Boiler Bites, Daisy De-Lites, Cove Cafe, Preludes, and Eye Scream Treats.  And room service is available 24 hours, with most items included in your cruise fare.

You can see our full guide to dining on the Disney Wonder here.

Shows on the Disney Wonder

Where does the Disney Wonder sail?

You can see all of the current itineraries for the Disney Wonder here. 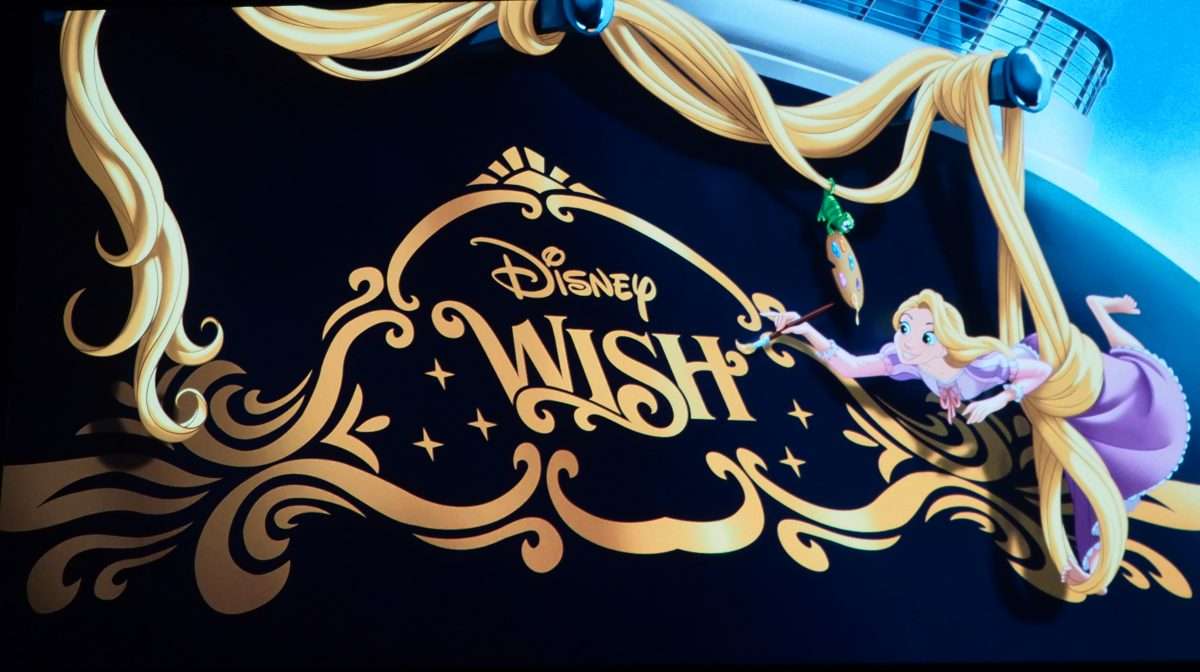 The Disney Wish is Disney Cruise Line’s newest ship that set sail in July 2022. This ship is the largest ship in the Disney Cruise Line fleet, offering 1254 staterooms with a capacity of 4000.  Cinderella will be featured in the atrium and Rapunzel at the stern.  The Disney Wish also has Disney attraction at sea! The AquaMouse is an immersive water ride and promises to bring a little Disney Parks magic to the cruise.

We’ve compiled a guide to everything we know about the Disney Wish here and will continue to update it as we learn more! To see the deck plans for Disney’s newest ship, click here.

The Disney Wish has a great lineup onboard. 1923, Arendelle: A Frozen Dining Adventure and Avengers: Quantum Encounter Dining Experience are available for rotational dining at dinner. We enjoyed all of these. Worlds Of Marvel leaves a little to be desired in terms of entertainment, but we still enjoyed the food. And for an adults-only experience, a new reimagined Palo is now available on the Disney Wish as a steakhouse. Enchante is a new adults-only dining option coming to the Disney Wish as well!

Marceline Market offers a more a casual dining atmosphere, similar to that of Cabanas on the other ships. This restaurant serves breakfast and lunch in separate food stalls around the restaurant. It is not a self-serve buffet, however, so be prepared for long waits during busy times here.  You can still get as much as you’d like here, you just have take your plate from station to station for a cast member to serve you.,

Mickey and Friends Festival of Foods is the go-to for grab-and-go selections, with offerings like Barbeque, build your own tacos, chicken tenders, pizza and more. Overall we think this is our favorite addition to the Disney Wish, as it really steps up the food game for quick service onboard! This area is also where you’ll find the free ice cream! Soft serve onboard the Disney Wish is no longer self-serve either, and a cast member will serve you. We actually prefer this as it tends to keep the mess down a bit.

Our full guide to the Disney Wish shares all the details!

Shows on the Disney Wish

The Disney Wish features three Broadway style shows. These include The Little Mermaid, which is exclusive to the Disney Wish, Aladdin and Seas the Adventure, which is a Disney original featuring all your favorite Disney pals. Shows are generally about an hour, with the latter being a half an hour.

Where does the Disney Wish sail?

The Disney Wish will just be setting sail for the first time in summer 2022. It’s hard to say what future plans Disney Cruise Line has for its newest ship in terms of cruise itineraries; but as of right now, the Disney Wish is only sailing to The Bahamas. The Disney Wish currently only offers 3- and 4-night itineraries. And with how large the ship is, we highly recommend a 4-night if you can manage it!

You can find all of the current itineraries for the Disney Wish here. 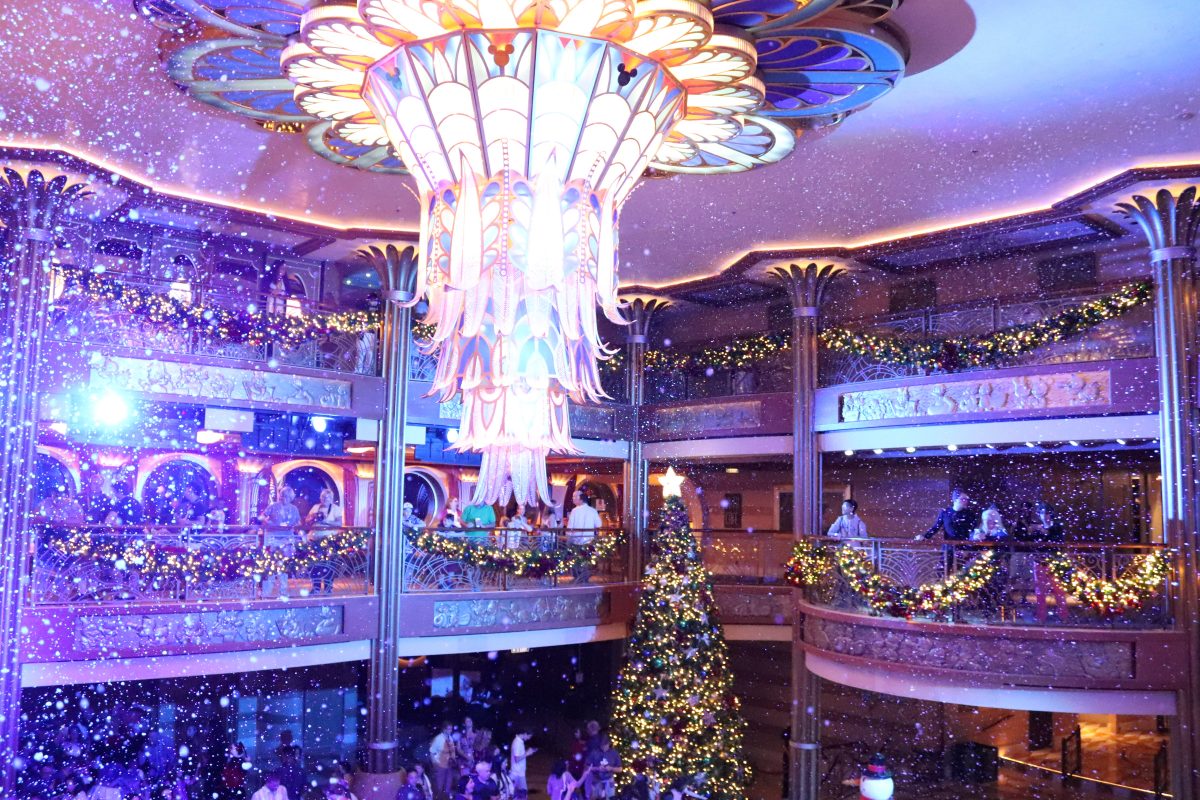 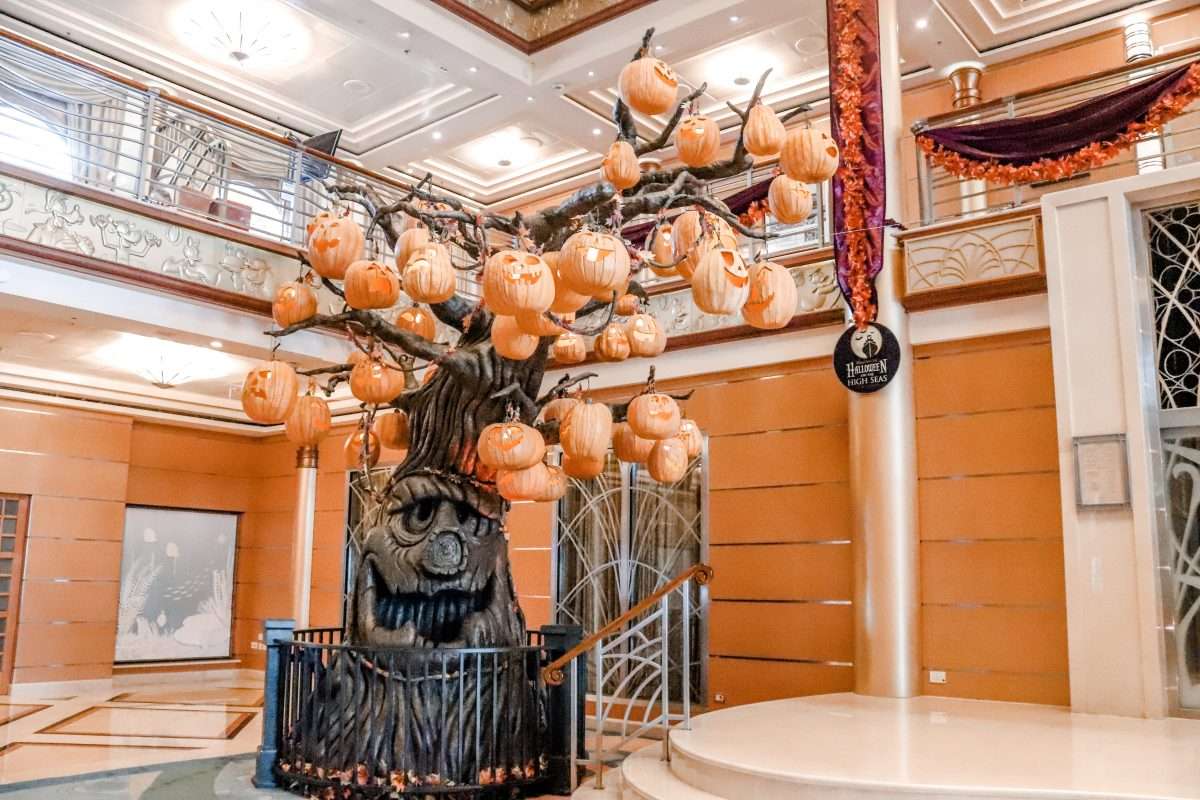 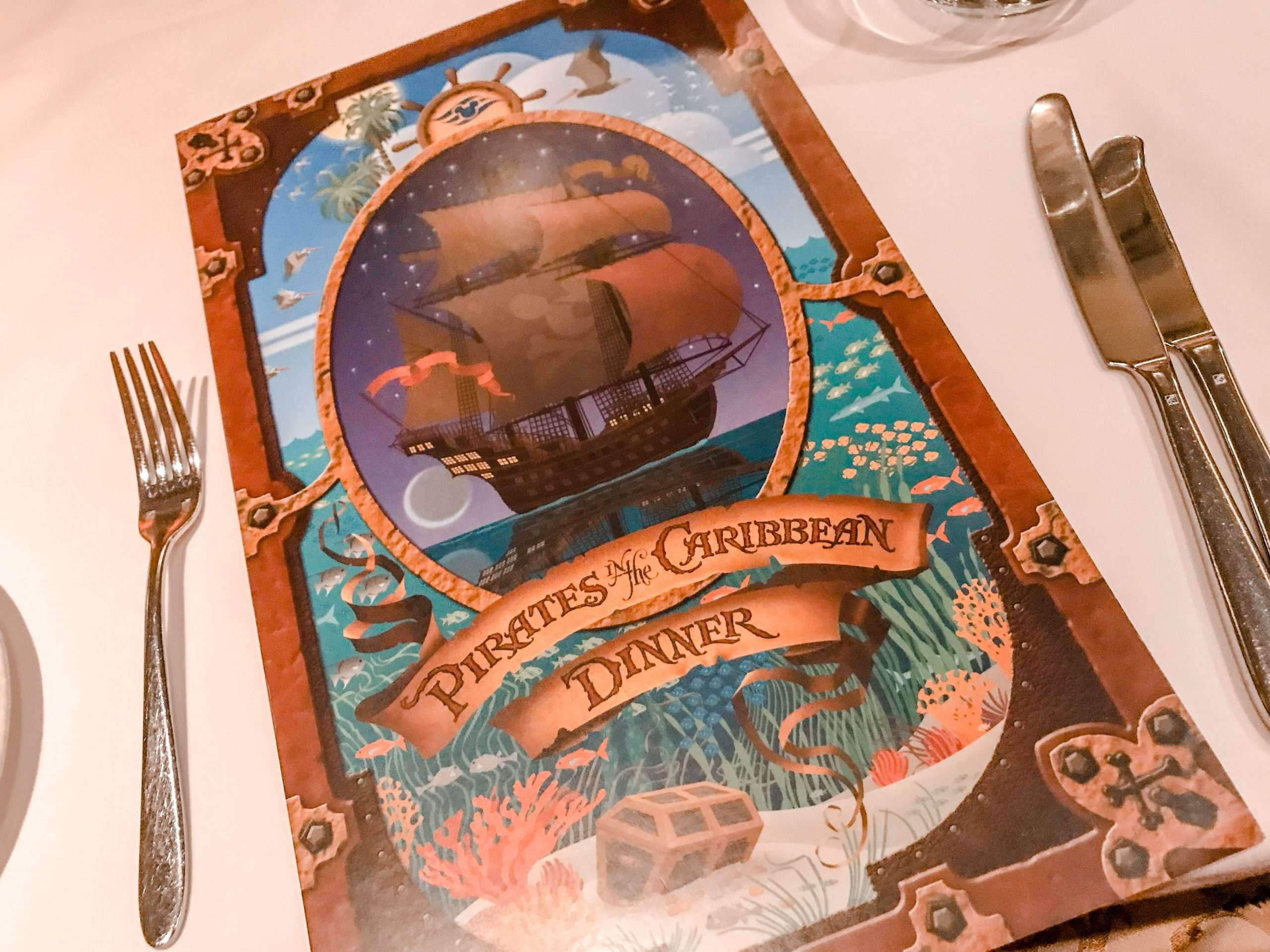 Do all of the Disney Cruise ships have Pirate Night?

All of the Disney Cruise ships sail to Castaway Cay! Just like Pirate Night, a stop at Castaway Cay is tied to the itinerary rather than the ship itself. You can see which ports of call each itinerary visits when you search for your cruise.

We know planning a Disney Cruise Line Vacation can be a little intimidating! We’ve compiled all of our Disney Cruise Tips and Experiences in one place for you. Whether you’re not sure what to pack, or things to know for first-time cruisers, we hope our little corner of the internet makes it a little easier for you.

Each of the Disney Cruise Line ships has something unique to offer! We love that each is different while still feeling familiar. No matter which Disney Cruise ship you sail on, you can count on delicious food, quality entertainment, and the best service in the industry.  Happy Sailing! 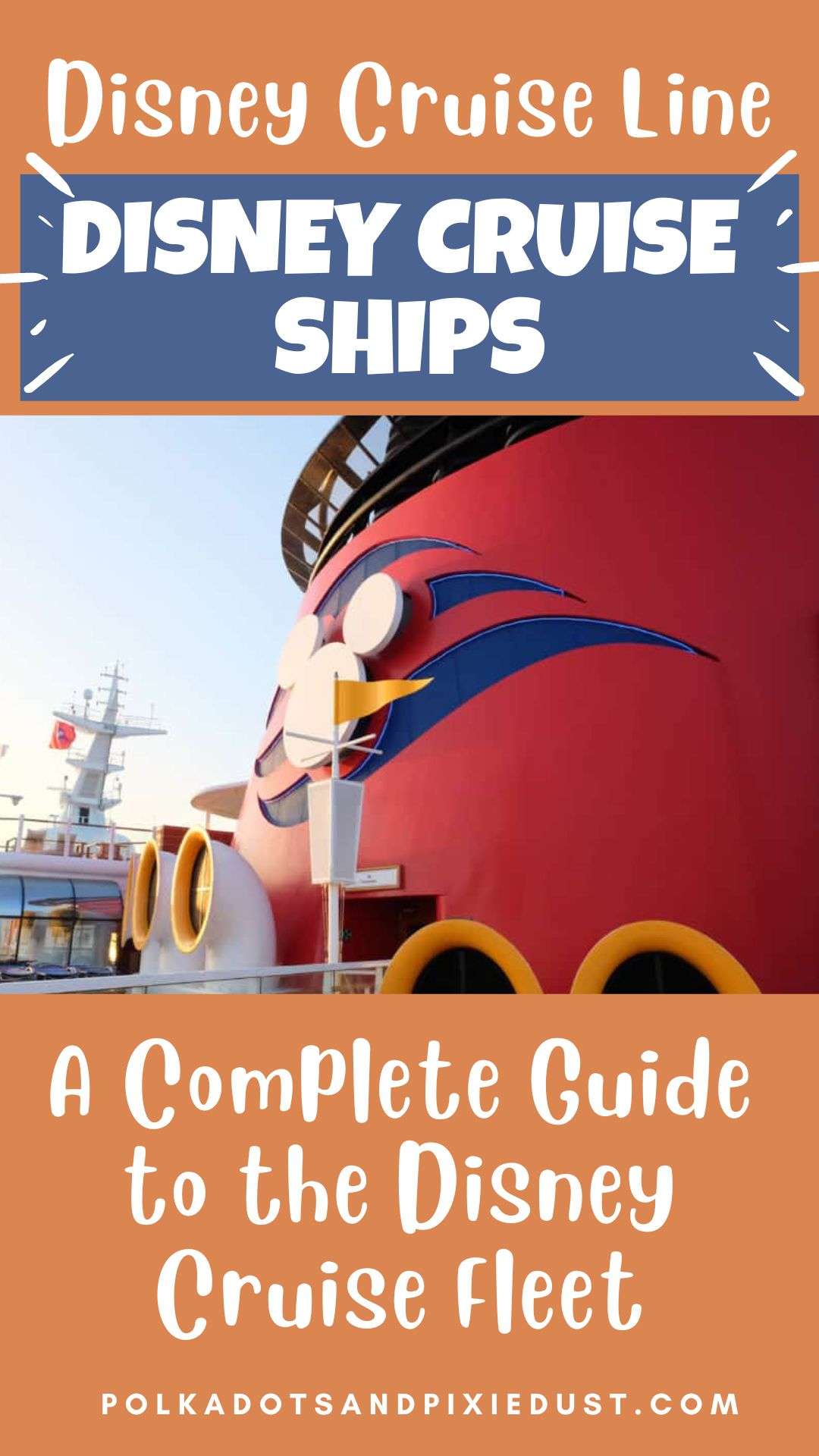